Accessibility links
Bernie Sanders' Campaign Turns To A New Foe: The Coronavirus It looked like Sanders was about to drop out of the Democratic primary, until the coronavirus crisis gave his agenda a boost and turned his campaign into a relief drive. But what's next? 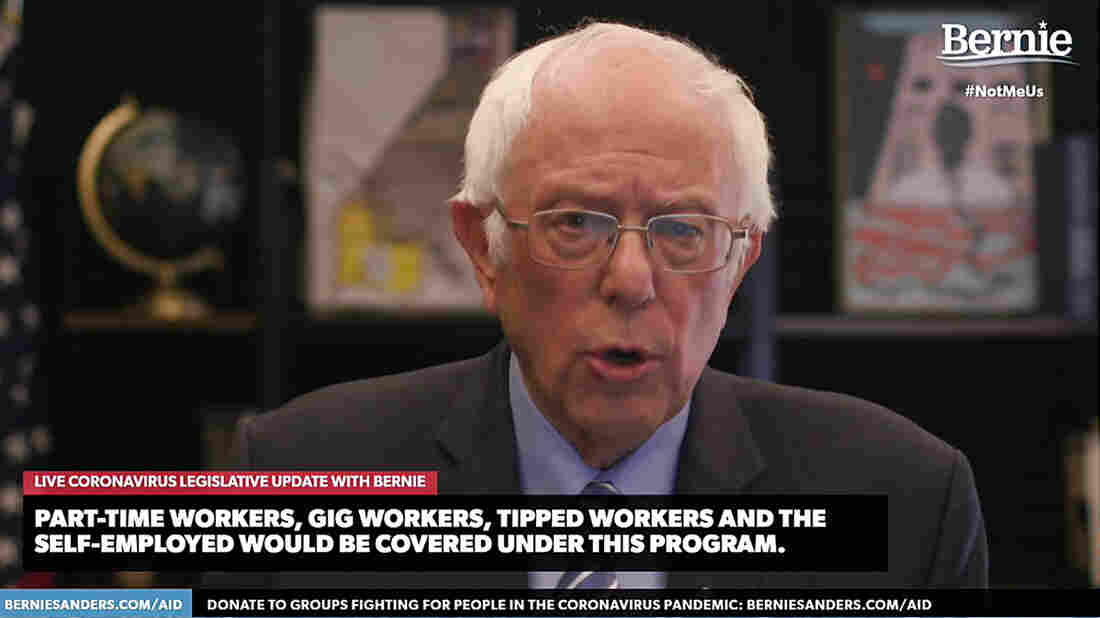 Democratic presidential candidate Bernie Sanders, U.S. senator from Vermont, talks about the coronavirus relief bill on Wednesday in one of several speeches about the crisis streamed on his campaign website. berniesanders.com via Getty Images hide caption 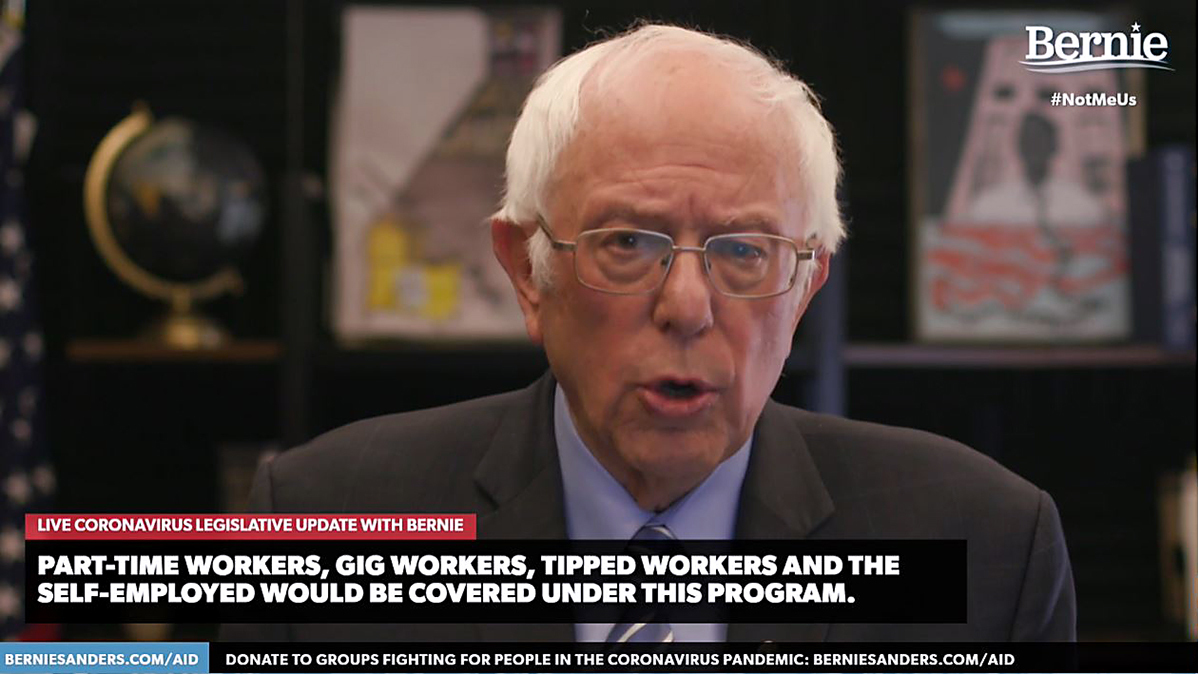 Democratic presidential candidate Bernie Sanders, U.S. senator from Vermont, talks about the coronavirus relief bill on Wednesday in one of several speeches about the crisis streamed on his campaign website.

After Bernie Sanders suffered three straight weeks of big losses across the country, the Vermont senator returned home to "assess his campaign."

It appeared in that moment that Sanders' campaign was all but over. He trailed former Vice President Joe Biden by about 300 delegates and was facing calls to drop out. The conventional wisdom in political circles was that Biden would effectively wrap up the nomination by the end of March.

But the coronavirus outbreak has largely put the presidential race on hold, with most upcoming primaries postponed and all in-person campaigning canceled. The immediate political focus has shifted to stopping the pandemic and offering financial relief to struggling Americans. And in this moment, Sanders' voice and vision seem to have had a resurgence.

Bernie Sanders On His Campaign: 'It's Going To Be A Very Steep Road'

His allies and supporters are convinced that as the crisis has unfolded and the U.S. suffers from record unemployment, the issues that the Vermont senator has long focused on, such as income inequality and "Medicare for All," will force the country to have a reckoning about its financial and health care systems. In other words, they're convinced the crisis is resuscitating Sanders' agenda.

"The reality that so many people have health care attached to their jobs and how vulnerable that makes them is showing its face right now," said Ana Maria Archila, the co-executive director of the Center for Popular Democracy, a coalition of progressive groups that endorsed Sanders. "I think many of his ideas, which were deemed radical just a few months ago, are now being promoted."

As evidence, supporters of Sanders point to recent bills in Congress that include cash payments to individuals, expanded unemployment benefits and paid sick time — all ideas, they note, that the senator has long championed.

They also point to a speech that Sanders delivered from the Senate floor last week that went viral, in which he ripped into a group of conservative Republicans who were concerned that the roughly $2 trillion relief package that Congress was set to pass might result in some low-income workers making more money because of expanded unemployment benefits.

But the senator's critics suggest, despite the big speeches and viral videos, that he was not as present on Capitol Hill as others. Some point to his former presidential rival Massachusetts Sen. Elizabeth Warren, who was key in shaping the corporate oversight portion of the bill. In fact, last weekend, Sanders skipped a vote in Congress to instead hold a virtual town hall from Vermont with members of the "squad," freshman Democratic Reps. Alexandria Ocasio-Cortez, Ilhan Omar and Rashida Tlaib.

Still, Sanders has remained in a policymaking role in this moment, and that gave him a spotlight that his primary opponent does not have.

Biden, who for most of his adult life was in some form of elected office, found himself in the strange situation of being somewhat powerless — no longer a senator and no longer a vice president. No media outlets took his virtual coronavirus speeches live, but they routinely turned to updates from Capitol Hill, where Congress was debating the largest rescue package in American history.

Campaigning against the virus

Outside of Congress, Sanders continues to hold virtual town halls and send emails to his supporters, but his message has shifted.

"In every classical facet of what a campaign does, we've basically moved away from that and become a coronavirus campaign," said Faiz Shakir, Sanders' campaign manager.

The campaign is not regularly contrasting with and critiquing Biden. Instead, it is largely focused on educating people about the virus and the economic assistance available.

The campaign is no longer actively spending on advertising and diverting money that would otherwise fill its coffers.

"The fundraising that you associate with the campaign, raising for the candidate, has all suspended," said Shakir. "All we're raising for is groups who are doing front-line work to help vulnerable communities. We've raised over $3 million."

As for the Sanders candidacy itself, Shakir insists the senator is still reassessing his future.

"It's gonna be a very steep road, I would not deny that for a moment," Sanders told NPR's Morning Edition a few days ago. At the same time, he suggested that he would like to continue debating Biden, as the former vice president has said they've had enough debates.

Sanders supporters and allies do not know if he will stay in the race and fight until the last primary, now postponed to June 23, less than three weeks before the scheduled start of the Democratic National Convention.

Nor are they saying he should.

But they emphasize that the senator has more influence and power in this moment because he's a presidential candidate.

"The campaign is a vehicle through which he can continue to engage people, so even for that reason alone the campaign is important," said Archila.

Without a national campaign, Sanders' megaphone wouldn't be as loud — whether it's for himself, his issues or aiding the coronavirus crisis.

"It's Sanders' last stand in electoral politics," said Barry Burden, director of the Elections Research Center at the University of Wisconsin-Madison. "He's old enough that I don't think anyone expects him to make another run for the presidency. He may be in his last term in the Senate or near it. Right now, he still has something of a national stage. Once he leaves the campaign, that will be gone."