Accessibility links
Toilet Paper Startup Ramps Up And Rolls In Wake Of Coronavirus Pandemic The sudden demand for "white gold" came at just the right time for a new toilet paper factory in Maine. "The demand is insane," says Tissue Plus owner Marc Cooper. 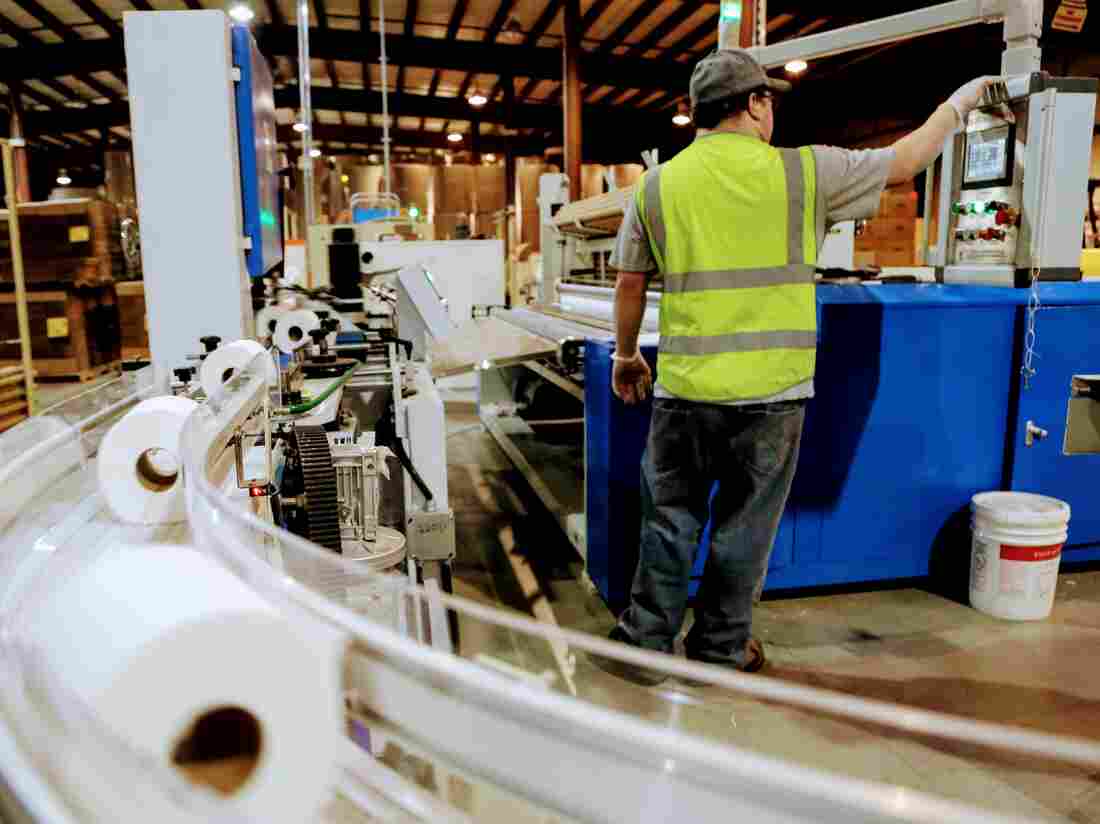 Local demand from individuals, senior centers, stores and the state prison system is unspooling every roll as fast as the workers at this Maine plant can wind them. Nick Woodward /Maine Public Radio hide caption 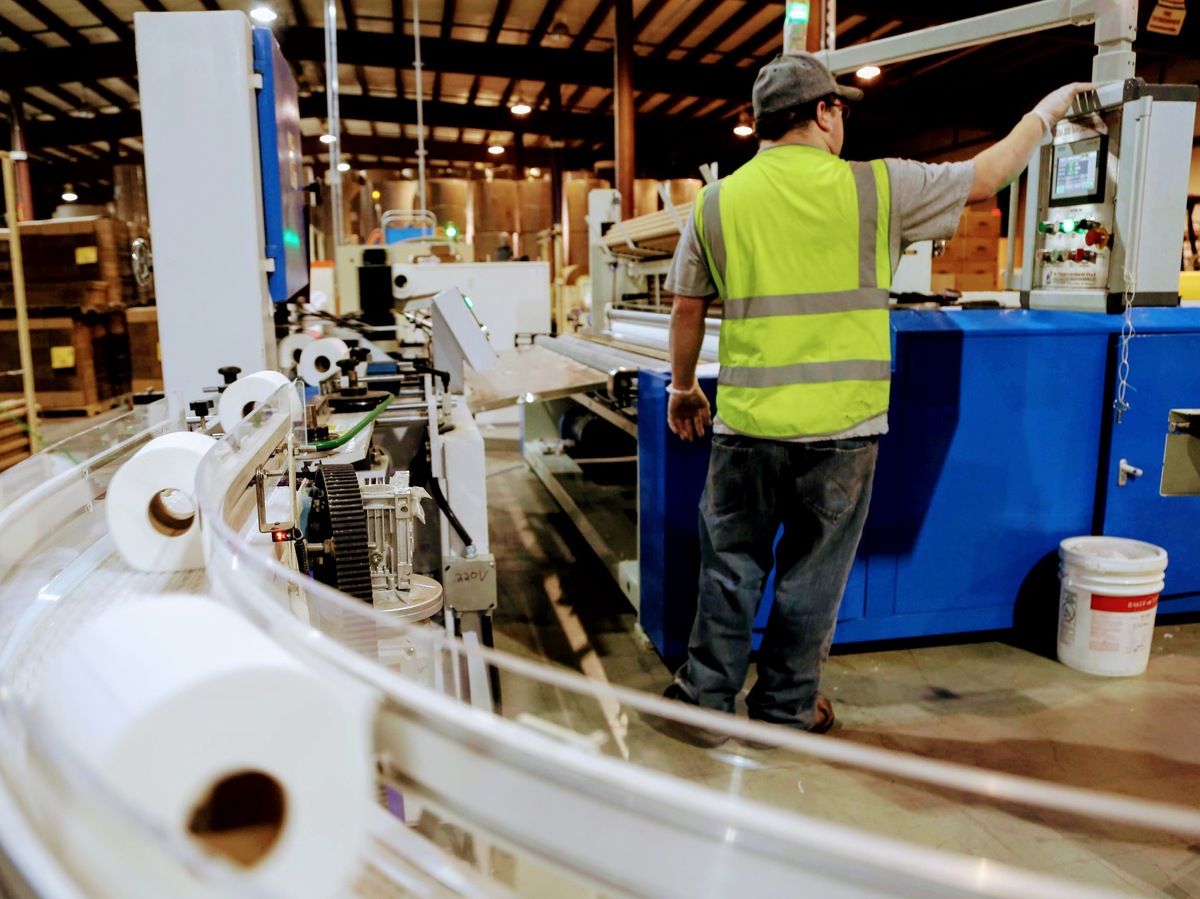 Local demand from individuals, senior centers, stores and the state prison system is unspooling every roll as fast as the workers at this Maine plant can wind them.

The coronavirus pandemic has led to the panic-buying of one item in particular: toilet paper.

Stores have been rationing the goods, in some cases, doling out as little as one roll apiece. This sudden demand for what some are calling "white gold" is proving a challenge — and an opportunity — for one fledgling family business in Maine, where the paper industry has seen some hard times.

"It's been insane. I don't sleep much," says owner Marc Cooper. But he's up, overseeing the early shift anyway. It's a busy, industrial scene of forklifts and pallets, and workers hustling from machine to machine, turning out rolls of tissue. It has been this way since his toilet paper startup, Tissue Plus, was forced into sudden go mode.

Why Do People Hoard Toilet Paper? A Look At Irrational Behaviors In Uncertain Times

Why Do People Hoard Toilet Paper? A Look At Irrational Behaviors In Uncertain Times

"So unfortunately, we weren't quite prepared for this to happen so quickly," Cooper says, "but we're doing our best to meet the demand. We've been very fortunate that there's been a good workforce available."

Shouting over the din of some proprietary machinery that does something we're not allowed to describe, employee Jeff Clement is busy keeping the rolls on the rails.

"Try to make sure they go in there nice and straight," he explains. "If they get crooked, it'll mess everything up."

Clement spent 30 years working at a nearby mill before it closed in 2014. An abundance of skilled paper workers like Clement is one reason Cooper decided to use his life savings to launch a new toilet paper factory in Bangor, Maine — a small riverside city probably most famous for its association with several Stephen King horror stories, including as inspiration for the setting of It.

The area's paper-making heritage, coupled with an availability of raw material made sense. And the product made sense, since it was something people would need every day.

Cooper has been able to take on 20 full-time workers so far. One of them is Peter Hamel who spent decades at another mill before it closed in 2006. Hamel says he never thought he would see a new paper plant nearby, but he's hopeful.

"I think we're gonna make it," he says. "It's an opportunity and it's good for the area, [brings] employment into the area."

N.C. Sheriffs Find 18,000 Pounds Of Toilet Paper And Other Products In Stolen Truck

And right now, he's making one of hottest items on the planet. And Cooper is hearing from all over the world.

"I actually received an inquiry from the country of Iceland yesterday," he says. "Grocery store chains from Florida, distributors from around the country. The demand is insane for toilet paper."

Tissue Plus is churning out toilet tissue and paper towels 18 hours a day, but even local demand from individuals, senior centers, stores and the state prison system is unspooling every roll as fast as the workers can wind them. Cooper says the company also donates a number of rolls to help homeless shelters and pantries get through the crisis.

Cooper says it'll take another 15 to 20 workers to get the plant up to its full speed of about 80 rolls per minute, around the clock.

He's hoping that a new online toilet paper subscription service he has just launched at tissueplus.com, among other ideas, will help fund those jobs. He's also planning to donate some of the money he brings in to helping those hurt by the pandemic.

But new enterprises are notoriously unprofitable. Cooper says so far, they've only seen money "go in one direction": out.

There are signs of a turnaround. In February, Cooper says Tissue Plus almost broke even, and with demand for the most important paper in the house only increasing, he's predicting that the company will break even, and maybe even turn a small profit.