Accessibility links
'Das Coronavirus' Podcast Captivates Germany With Scientific Info On The Pandemic Produced by the public broadcaster NDR, the program features scientist Christian Drosten giving clear information about COVID-19, but so far it's in German only. 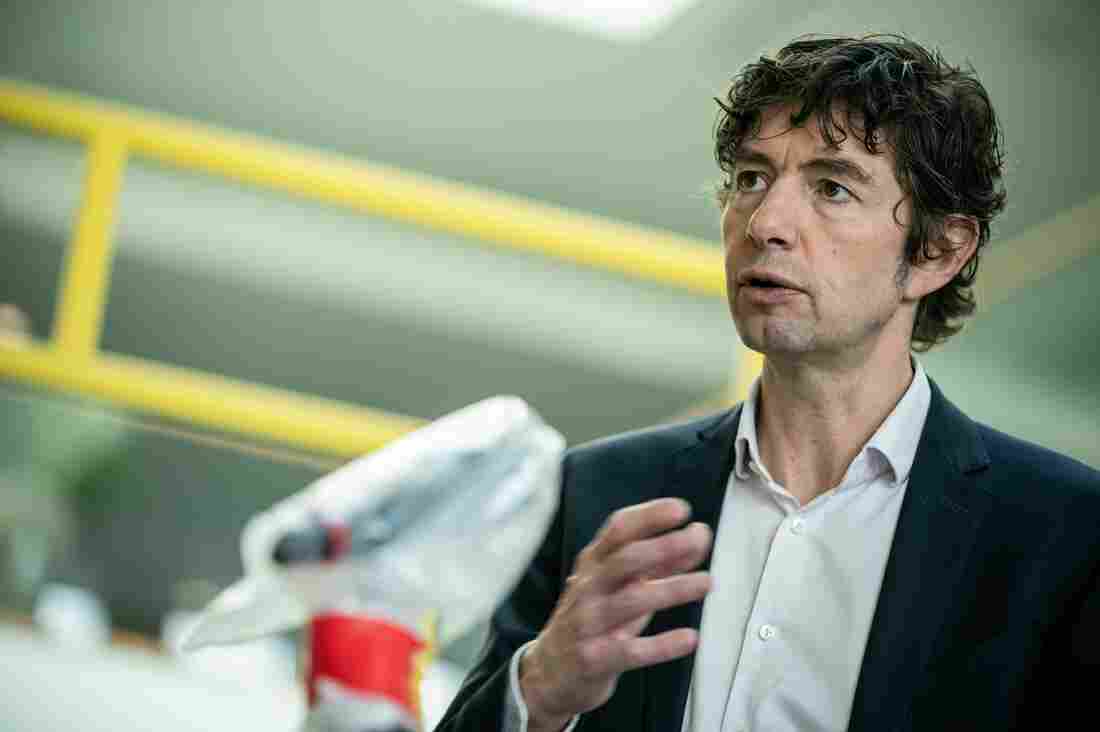 Christian Drosten, director of the Institute of Virology at Berlin's Charité hospital, is pictured after a news conference in Berlin on March 26, to comment on the spread of the novel coronavirus in Germany. Michael Kappeler/AFP via Getty Images hide caption 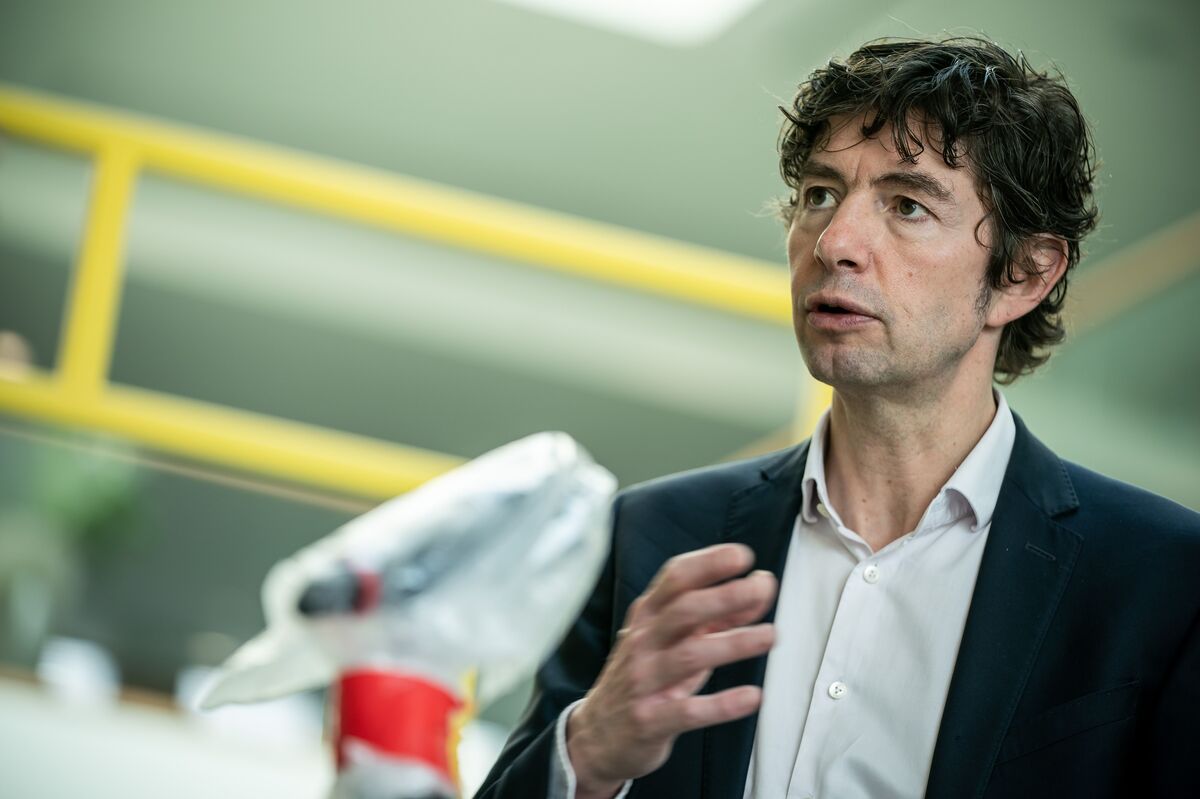 Christian Drosten, director of the Institute of Virology at Berlin's Charité hospital, is pictured after a news conference in Berlin on March 26, to comment on the spread of the novel coronavirus in Germany.

When news broke of an epidemic in Wuhan, China, German scientist Christian Drosten was soon in great demand.

Drosten is one of the world's leading experts on coronaviruses, and, back in 2003, he and a colleague were the first Western scientists to discover SARS after China hid information about that outbreak.

Since January, his team at the Institute for Virology at Berlin's Charité hospital has been working overtime to develop the world's first publicly available test for COVID-19. German media have pestered him for interviews.

"I was often on television, and the way your statements are abbreviated there and how sometimes also your message is completely diluted frustrated me," Drosten, 48, recalls.

It also frustrated Norbert Grundei, a program manager at public broadcaster Northern German Radio, or NDR. Grundei felt the public wasn't getting information it needed about this new virus and the nature of its threat to humanity. He thought to himself: The world's top expert on coronaviruses lives here, in my backyard. Why not do a daily podcast where people could ask him questions?

But he wasn't sure if professor Drosten — who was juggling coronavirus research and advising European leaders — would have time to respond. Grundei emailed him anyway. "And only a few hours later I got an answer in which he said, 'Well, I'm on the road right now. I think it's a good idea. We can start on Monday,' " Grundei says.

The time it took from idea to execution: three days. After just two daily episodes in late February, Das Coronavirus-Update shot to No. 1 on Apple podcasts in Germany, where it has remained ever since.

The podcast has gained popularity at a time when confirmed cases of COVID-19 in Germany have risen above 67,000, with more than 650 dead, and while German politicians have been slow to issue public gathering and social distancing orders. That has left the German public craving every bit of reliable information about this virus as possible.

In the show, an NDR science journalist interviews Drosten and then poses questions from the audience. Drosten's approach is of a meticulous scientist, up to date on all the latest research, who hypothesizes and questions what we think we know about the virus.

In episode 15, for instance, he takes a question about why young, fit adults were in critical condition from COVID-19.

"The latest research suggests that when the virus starts in the throat, there's a degree of time to build up immunity before it progresses to the lungs, where it can do more damage," Drosten tells the podcast host. "This hypothesis — and I stress, it is just a hypothesis — also suggests why a number of young and fit patients are in critical condition. It's possible that when the initial virus skips the throat and starts in the lungs, there's no time for immunity to build up before damage is done."

In another episode, Drosten and the host discuss the French Health Ministry's warning that ibuprofen might worsen the effects of the coronavirus, a claim that global health experts said had no scientific basis. Drosten says the information veers into to the fake news realm.

"While this virus is new," he says, "other coronaviruses and cold viruses do not react negatively to ibuprofen. We'd surely know this by now if the evidence were conclusive."

Drosten's open-ended scientific decoding has been popular with German audiences. Podcast director Grundei says the podcast's analytics show most people listen to the entire 30 minutes. He says listeners hang on to every word of a man who has been advising Chancellor Angela Merkel throughout the course of this pandemic. "The idea that all people in Germany have the same consultant as the political leaders have in Germany, is, I think, a really good idea," says Grundei.

Drosten thinks so, too. He says the longer format of a podcast is a good way to explain the science behind this virus so that the public makes well-informed decisions. "And the way you can be differential and you can say a little bit more and things are not cut out," says Drosten. "I think this is what makes it authentic. And I couldn't do that on any other topic. I can only do that on this very topic that I work on."

And that's made Drosten a celebrity in Germany. "I have to admit, it's a little unsettling and I'm not happy about it," Drosten says, in episode 19, when another of the podcast's hosts asks him about his budding fame in his home country. "It feels like I'm being held up as a kind of figurehead. This hype particularly worries me when my words are taken out of context."

And that's why Das Coronavirus-Update hasn't been translated into English yet, Grundei says. The World Health Organization has urged him to translate it quickly so the rest of the world can benefit from it. But professor Drosten insists it would have to be done by a fellow scientist so the rest of the world can have the most accurate information of a virus that threatens us all.

Esme Nicholson contributed reporting to this story in Berlin.