Accessibility links
Jonathan Karl's Memoir Shows That We Are All 'Front Row At The Trump Show' The ABC White House correspondent avoids bravado and knows better than to let insiders use his book to sound off about their enemies. But the obviousness of his account reveals an alarming truth. 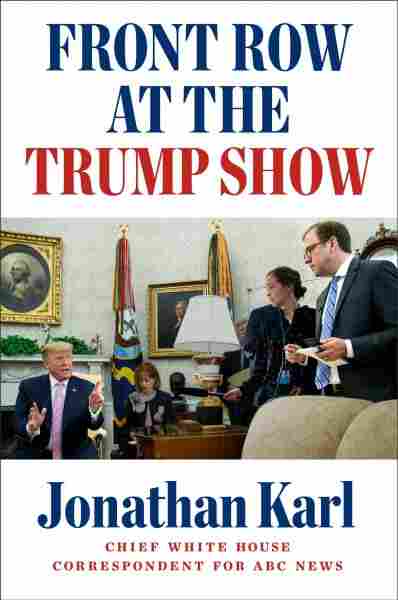 Front Row at the Trump Show

White House memoirs generally fall into two categories: Me, I was there! and Hey, it wasn't my fault!

Karl's book tells of how he first met Trump when he was working as a New York Post reporter: "I was a cub reporter for a New York tabloid. He was a flamboyant real estate developer with a scandalous personal life." (To quote Avril Lavigne, "Can I make it any more obvious?")

"My vantage point is unique — and not just because of where I sit at presidential press conferences. I've known Donald Trump longer than almost all of his top advisors and the reporters who cover him," writes Karl.

Karl follows Trump in his first years as president, reporting with accuracy and clarity but little new insight. To be fair, it's not Karl's fault that we've visited these spots again and again like weary pilgrims traversing the Via Dolorosa: inauguration crowd size; Kellyanne Conway and the minting of the phrase "alternative facts"; Melissa McCarthy as press chief Sean Spicer on SNL; Charlottesville's violent Unite the Right rally; Anthony Scaramucci's short-lived and foul-mouthed stint as communication director; and on and on.

We read it first courtesy of news outlets — remember the news alerts? The constant departures, the backstabbing, the sense of descending chaos, that anything could and would happen, that no one was in charge. Then we had the first book accounts — journalistic (Fire and Fury and Fear), and the "disgruntled former employee" memoirs (Spicer; former White House aide Omarosa Manigault Newman; supposedly soon: former national security adviser John Bolton).

All of these are instruments playing the same symphony, but pitched to different ends: truth, vanity, exculpation. In fact, it's hard not to agree with Washington Post book critic Carlos Lozada, who has called the Mueller report "the best book by far on the workings of the Trump presidency."

Karl's book happily does not, as many other accounts do, over-rely on former White House strategist Steve Bannon, who, because of his willingness to give interviews, has managed to enshrine his version of events as public record. We also get mercifully little palace intrigue — Karl knows better than to let White House insiders use his book to sound off anonymously about their enemies.

I imagine Karl may have Acosta in mind when he writes: "We are not the opposition party, but that is the way some of us have acted, doing more to undermine the credibility of the free press than the president's taunts have done."

That's a bold claim. But he never meaningfully explains what he means. What is the state of the press? How has it changed under Trump? Karl's book is irritatingly unspecific.

At one point, Karl quotes Harry Truman: "The only thing new in the world is the history you don't know." Karl's book is light on the history we don't know.

He has a few small scoops: For instance, Trump fixer Michael Cohen told an ABC producer that he would knock over a camera if he didn't like the questions they asked in an interview. And, former acting White House chief of staff Mick Mulvaney told his staff to read the book A First-Rate Madness: Uncovering the Links Between Leadership and Mental Illness, which argues that in "times of crisis, we are better off being led by mentally ill leaders than by mentally normal ones." (In other words, Mulvaney appears to have believed that Trump was mentally ill and that it might be a good thing.)

But Trump usually undermines more substantial scoops by, sooner or later, repeating in public whatever scandalous thing he has said in private. So Karl's exclusive coverage of a conversation about Charlottesville in which Trump praised Confederate generals would feel more urgent if Trump had not said more or less the same thing a few days later, in front of cameras.

You don't need a front row seat at a White House press briefing to figure that out. In fact, in the sheer obviousness of his account, Karl inadvertently points to a larger and more alarming truth: We are all of us, always, in the front row at the Trump show now.