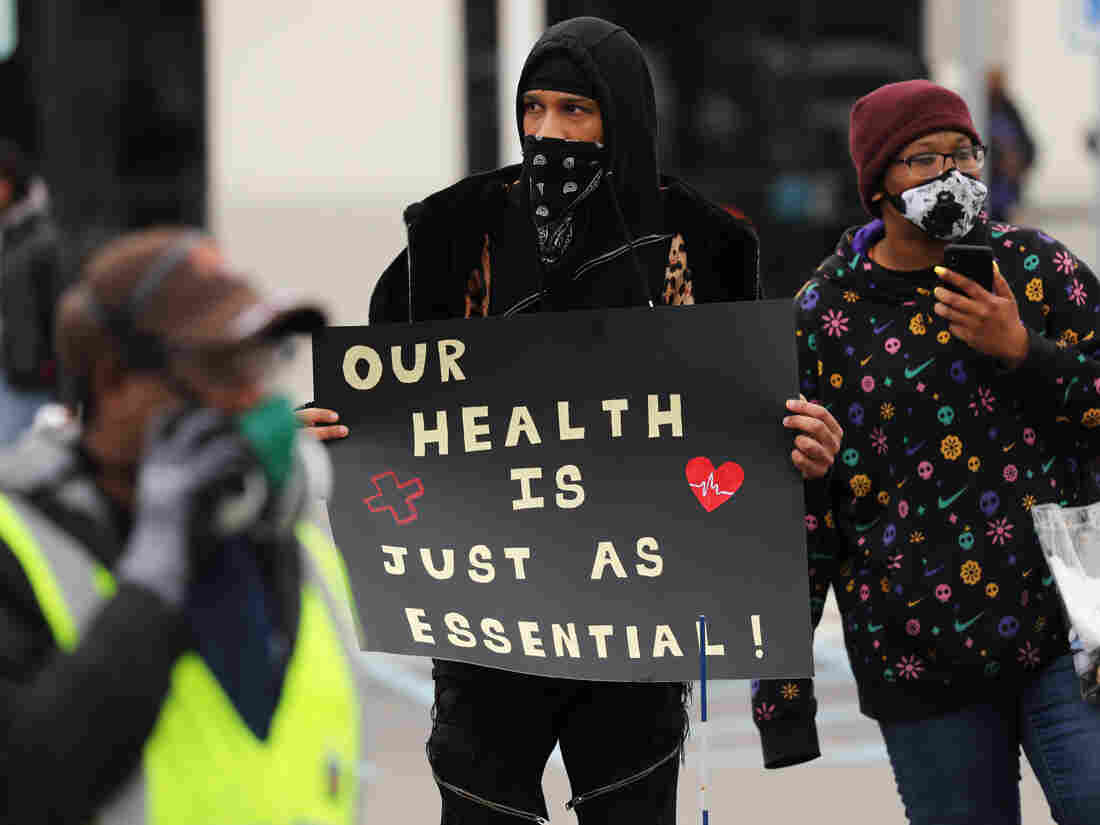 Some Amazon warehouse workers in New York's Staten Island walked off their jobs on Monday, demanding the company shut the facility for cleaning after several confirmed cases of the coronavirus. Spencer Platt/Getty Images hide caption 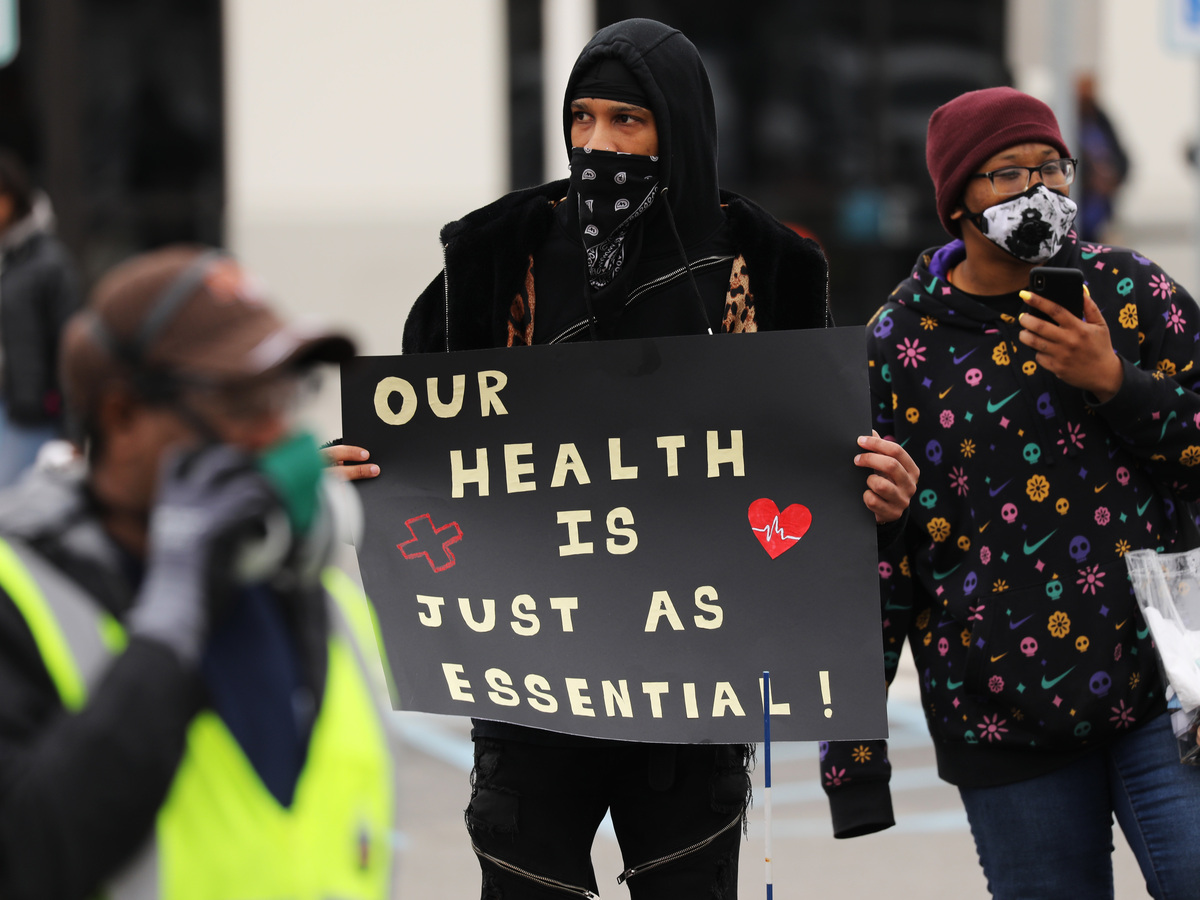 Some Amazon warehouse workers in New York's Staten Island walked off their jobs on Monday, demanding the company shut the facility for cleaning after several confirmed cases of the coronavirus.

New York City Mayor Bill de Blasio has ordered the city's human rights commissioner to investigate Amazon over the firing of a warehouse employee who helped organize a worker walkout on Monday. The order, announced on Tuesday, follows the call from New York state's attorney general for a federal labor investigation into the firing.

A group of warehouse workers walked off their jobs in Staten Island to demand that the company close the facility following several confirmed cases of the coronavirus among staff.

Later that evening, Amazon fired one of the organizing workers, Chris Smalls, saying he violated quarantine and safety measures. Smalls and other organizers of the walkout allege the firing was in retaliation for his activism.

New York Attorney General Letitia James said the firing was "disgraceful" and called for an investigation by the National Labor Relations Board. Federal law protects workers' rights to strike and organize other collective action to protest working conditions.

"At a time when so many New Yorkers are struggling and are deeply concerned about their safety, this action was also immoral and inhumane," James said in a statement, adding that her office "is considering all legal options."

Amazon warehouse workers' walkout on Monday was one of several similar protests popping up among people in low-wage hourly and gig jobs whose retail and food delivery work is declared essential. Workers say they want more access to paid sick leave, better health safeguards and hazard pay as they keep working while much of the country is asked to isolate and stay home.

Smalls and other workers in Amazon's Staten Island warehouse want the company to temporarily shutter the facility for a prolonged deep cleaning, as the company did in Kentucky at the governor's order. At least two workers in the Staten Island warehouse have tested positive for COVID-19, though Smalls told NPR the number is much higher. Amazon declined to share the count.

Amazon said it has been taking "extreme" safety and cleaning measures and has begun checking the temperature of all workers arriving at the Staten Island warehouse. A spokeswoman said Smalls had "received multiple warnings for violating social distancing guidelines" and came to the facility for the walkout in violation of his quarantine following earlier contact with a staffer who has COVID-19.

"This is unacceptable, and we have terminated his employment as a result of these multiple safety issues," the Amazon statement said.

Protest organizers argue that Amazon is punishing Smalls for speaking out against the working conditions in the facility, which include lack of gloves and masks and limited access to paid sick leave.

"Amazon quarantine policy is extremely flawed," Smalls said. "It leaves that window for people to still continue to come to work until they receive a confirmation letter from the doctor's office."

Smalls says he had informed the company that one of the staffers on his team had received a test for the coronavirus, but the company could not require the worker to stay home until the results would confirm the diagnosis. Amazon does provide unlimited unpaid leave during the pandemic, so Smalls says he sent the worker home after briefly talking to her.

He says he also took advantage of the unpaid leave, though continued to visit the building to help organize the walkout. Smalls says the company did not place him on quarantine until several days after his team member first got tested.

"I told them, 'She went and got tested. Why didn't you quarantine her right then?' That's the problem with their policy," he said. "She was able to come to work with the coronavirus. ... Thank god I sent her home. ... I did them a favor, so they're talking about I'm putting my employees' health at risk. They did that."

On Tuesday, another arm of Amazon — Whole Foods — was expected to see some of its grocery store employees participate in a "sickout" to demand hazard pay and three weeks of paid time off regardless of diagnosis.

Amazon has temporarily bumped its pay by $2 an hour and created a new sick leave policy for the pandemic, allowing two weeks of paid leave for those diagnosed with COVID-19 or mandated to self-quarantine. But workers want this leave to be available to everyone, including those with preexisting conditions or those living with high-risk family members.