Accessibility links
Wallace Roney, Intrepid Jazz Trumpeter, Dies From COVID-19 Complications At 59 The pugnacious post-bop player and composer, who was mentored by Miles Davis and Clark Terry, had been hospitalized since last Wednesday. 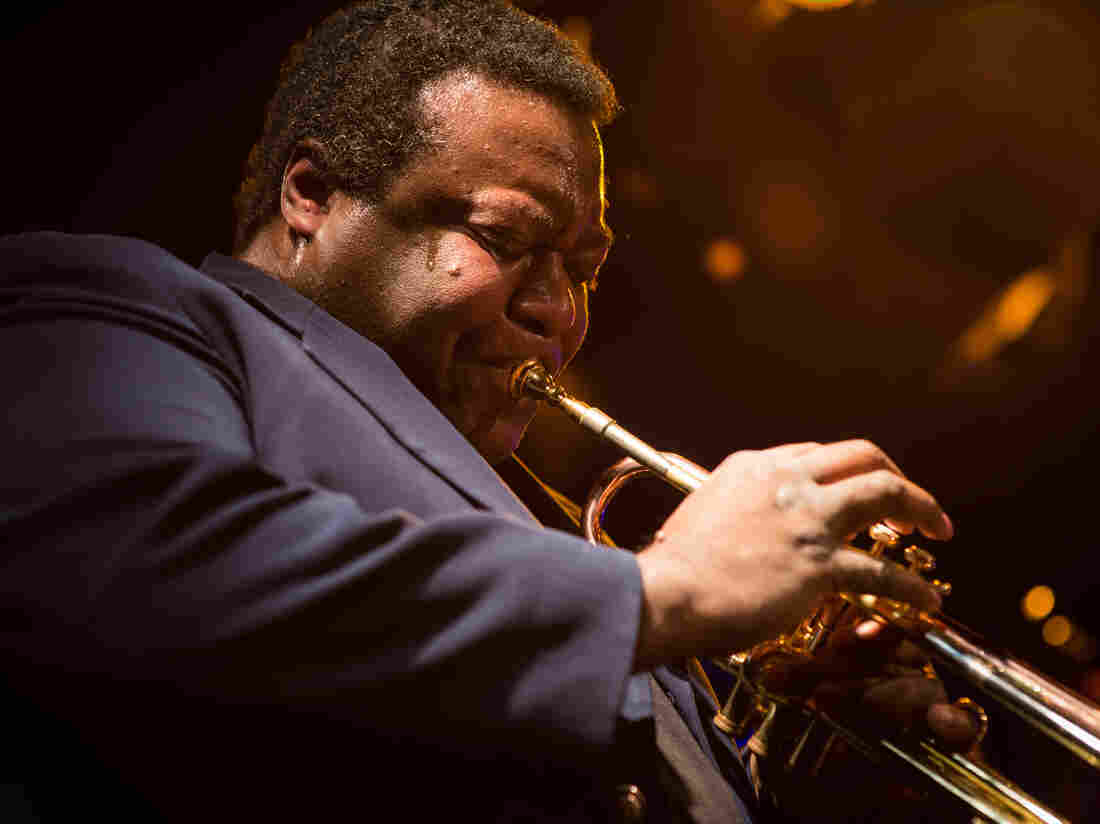 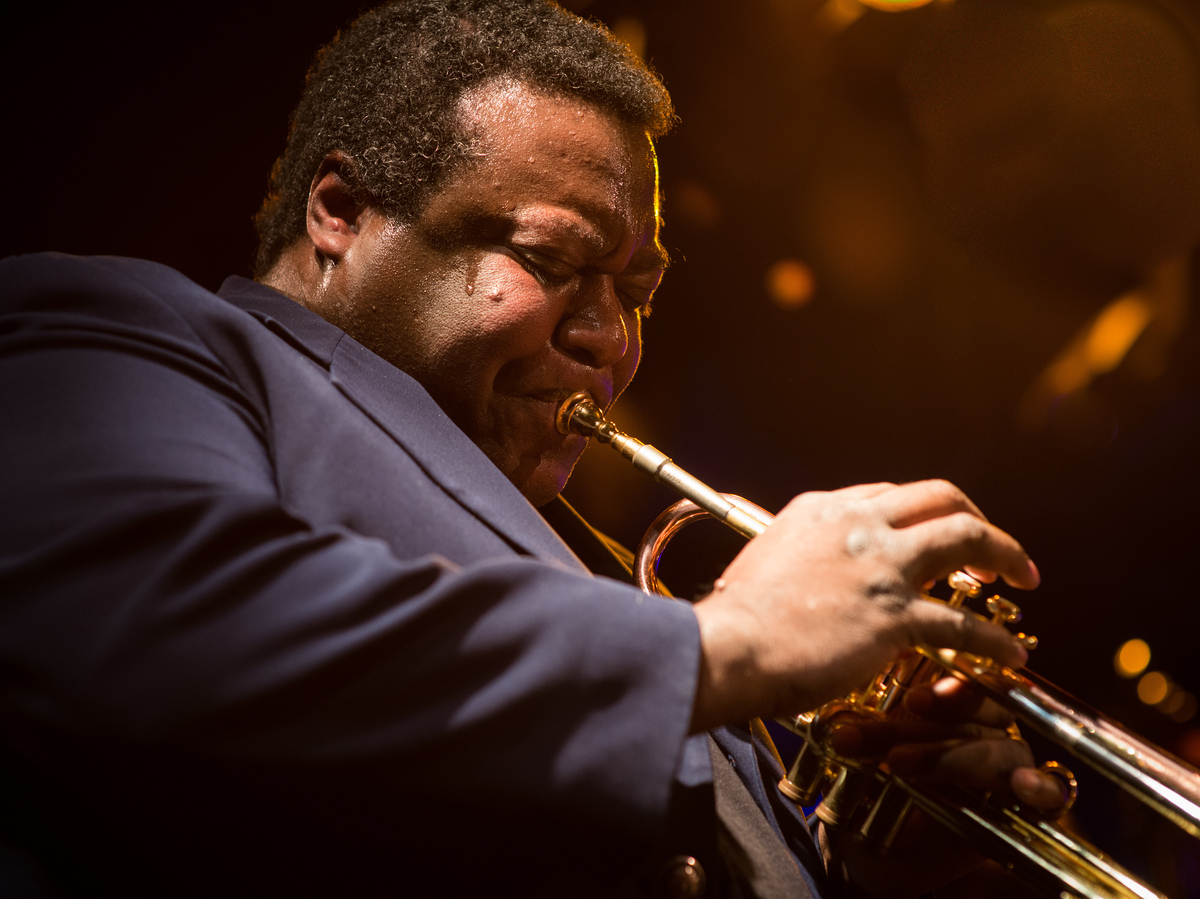 Wallace Roney, a trumpeter and composer who embodied the pugnacious, harmonically restive side of post-bop throughout an illustrious four-decade career, died this morning at St. Joseph's University Medical Center in Paterson, N.J. He was 59.

The cause was complications from COVID-19, according to his fiancée, Dawn Felice Jones. She said Roney had been admitted to the hospital last Wednesday.

Roney first rose to prominence as a sharp young steward of the modern jazz tradition, winning national awards in his early 20s and joining several high-profile bands. But it was a public benediction by his idol and mentor, Miles Davis, that catapulted him into a rare stratum of jazz celebrity.

That moment, retold in the recent film Miles Davis: Birth of the Cool, took place at the 1991 Montreux Jazz Festival. Producer Quincy Jones had arranged for Davis to revisit his orchestral albums Sketches of Spain and Porgy and Bess, and Roney was enlisted to play the trumpet solos in rehearsal. Davis insisted that Roney also join him onstage, where he instinctively jumped in to handle some of the more technically demanding parts, and implicitly joined a chain of succession.

That Milesian association was both a proud feature and a persistent bug for Roney, who led a succession of dynamic small groups and released some 20 albums as a leader — the most recent being Blue Dawn-Blue Nights, issued on HighNote Records last year. In the dark gleam of his tone and the slithery tensions in his phrasing, Roney could often evoke his hero unreservedly. He won his lone Grammy award alongside the surviving members of the Miles Davis Quintet, for a 1994 album called A Tribute to Miles.

At the same time, Roney was an artist of granite resolve, exacting standards and his own unswerving compass. Critic Stanley Crouch once pronounced him "one of the best bandleaders in the music," in spite of any comparisons to Davis. "What one hears is a manipulation of the simple and the complex as well as a conception of improvising in which forms and approaches can be reordered on the spot," Crouch added, in a feature for The New York Times.

Wallace Roney was born on May 25, 1960, in Philadelphia. His father, also named Wallace Roney, was a U.S. Marshal who imparted an early admiration for Miles Davis; his mother, Roberta Sherman, favored Thelonious Monk. He had perfect pitch as a child and began trumpet lessons at age 5. By 12 he was the youngest member of The Philadelphia Brass, a prominent classical brass quintet. During this time, he came under the tutelage of Clark Terry, the first of his major jazz mentors.

By his teens, Roney's family was based in Washington, D.C., where he attended the Duke Ellington School of the Arts, before earning degrees from Howard University and the Berklee College of Music.

It wasn't long before Roney was turning heads, first on the local scene and then in New York. He circulated widely as a teenager, working with an honor roll of elders. One of those, drummer Art Blakey, brought him into the Jazz Messengers, which was widely known as a finishing school for top talent. (Roney succeeded Terence Blanchard in a trumpet chair that had also recently been occupied by Wynton Marsalis.)

Roney was then hired by another leading drummer, Tony Williams, who'd blazed a trail in the Miles Davis Quintet. In Williams' working band, which recorded several albums for Blue Note from the mid-1980s to the early '90s, Roney had an ideal platform for his slashing approach.

He made his own debut, Verses, in 1987, and over the next decade he averaged a new album a year. The last few releases of that run were made for Warner Bros., including Village, which featured contributions from pianist Chick Corea, drummer Lenny White and saxophonists Pharoah Sanders and Michael Brecker. The album also featured Wallace's brother Antoine Roney on saxophone, and his future wife, Geri Allen, on piano.

Roney and Allen were married in 1995, and for a time they routinely appeared in each other's bands; he can be heard on several of her albums, including the classic Eyes...In the Back of Your Head. Their marriage ended in divorce, and Allen died in 2017.

While he was widely understood as a post-bop paragon, Roney delved meaningfully into funk and fusion, and he spent some formative time with free-jazz titan Ornette Coleman. For a time, even leading an acoustic ensemble, he made space for turntablist Val Jeanty.

In 2014, Roney presented the first public airing of some music that saxophonist Wayne Shorter had composed during his time in the Miles Davis Quintet. The suite, called Universe, had never been recorded, and Shorter entrusted it to Roney to realize. He premiered it at the Winter Jazzfest in New York, and performed it that summer at the Charlie Parker Jazz Festival, with a 19-piece chamber orchestra; the following week, he brought it to the Detroit Jazz Festival, in a performance captured by Jazz Night in America.

"It's like finding the Dead Sea Scrolls after all these years," Roney says in that radio episode. "You look up and you find this music from a time when it was most innovative."