Accessibility links
Cancelled College Graduations Amid Coronavirus For many college students, walking across the stage isn't just a celebration, it's a recognition of years of hard work, and often sacrifices from their families. What happens when it's cancelled? 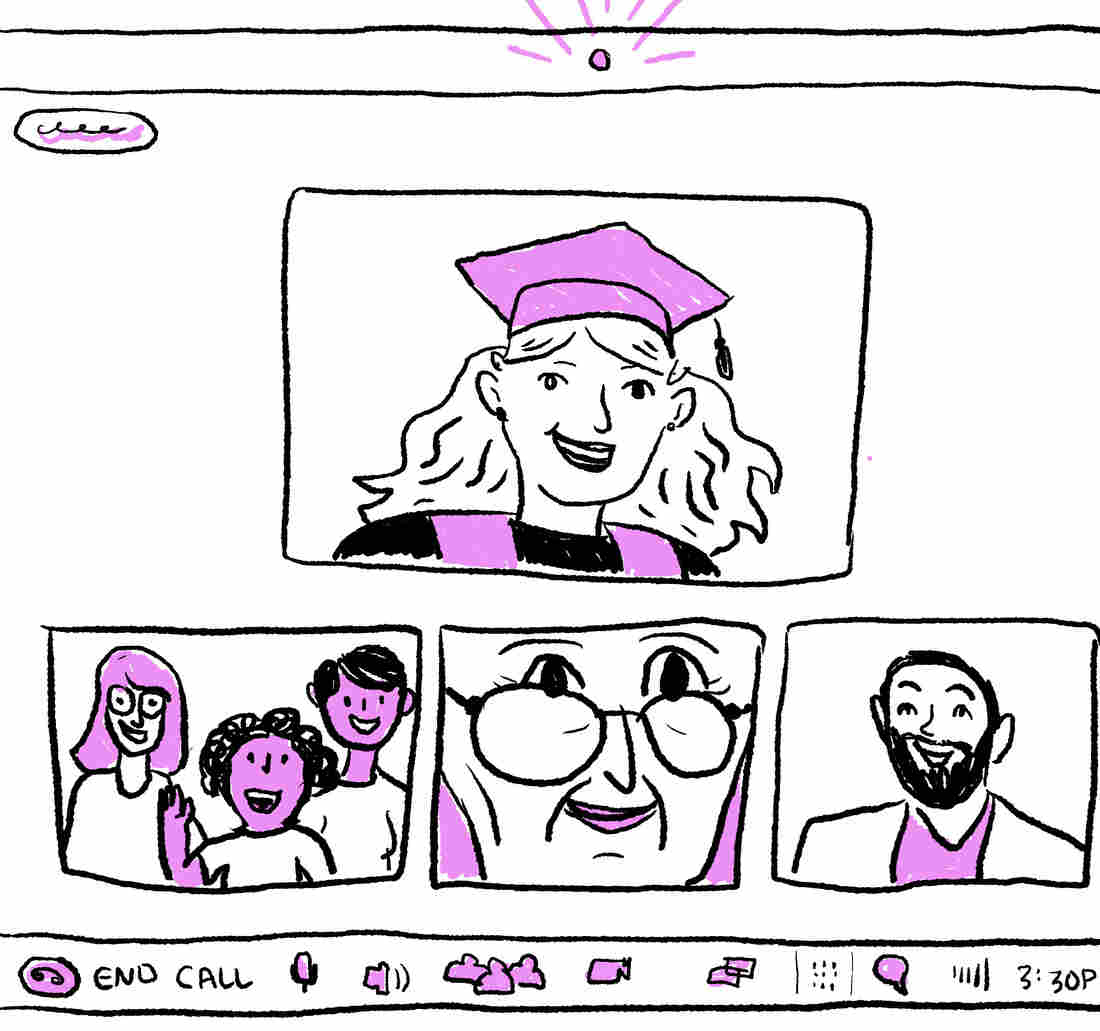 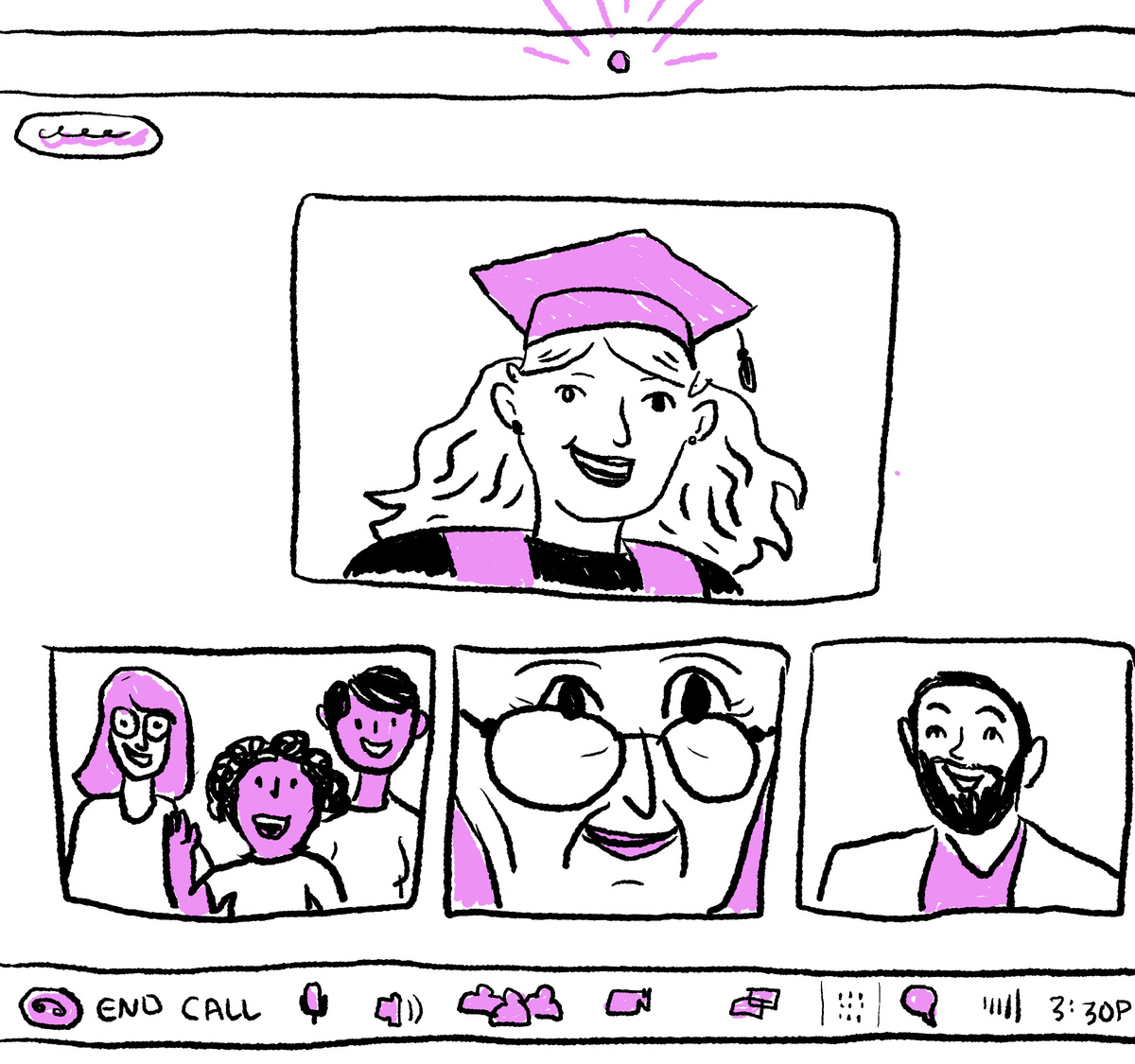 It was a pretty normal St. Patrick's Day. Nathan Stewart and a couple of friends were hanging out, drinking a few beers, soaking up senior spring at the University of Virginia. Then an email landed in their inboxes: Classes were moving online and graduation was indefinitely postponed.

"Honestly, my friends and I just immediately started crying," says Stewart. Throughout his four years at UVA, graduation had been a major motivator. When he and his friends were having tough days, they'd tell each other, "Just wait till graduation day. We're all walking across the stage together and we'll get our diplomas. It'll be so worth it then."

Now, he says he feels burned out. His research job on campus was discontinued — that was his only source of income — so Stewart is figuring out how to pay the rent on his off-campus apartment. That's on top of all his classes shifting online. "Trying to balance out the financial aspect of it, in the midst of it being emotional, is just really difficult," he says. "The hard thing, too, is that you can't place your anger or sorrow on anybody because nobody knows what they're doing."

As he and his friends were sitting around drinking, stewing over the bad news, he remembers thinking: "You know what's crazy? The administration is probably doing the exact same thing: Sitting on somebody else's couch, drinking a few beers, saying, 'What the hell are we going to do?' "

Nathan Stewart is right. Administrators and college presidents are scrambling to figure out what to do about graduation this year. How can they acknowledge students' hard work and success, while still maintaining social distancing amid the outbreak of coronavirus?

Many colleges across the country have outright cancelled graduations, others, such as Harvard and Miami University in Ohio, have scheduled virtual ceremonies. Some students have taken things into their own hands and created their own ceremonies — on a reconstructed campus — through Minecraft. 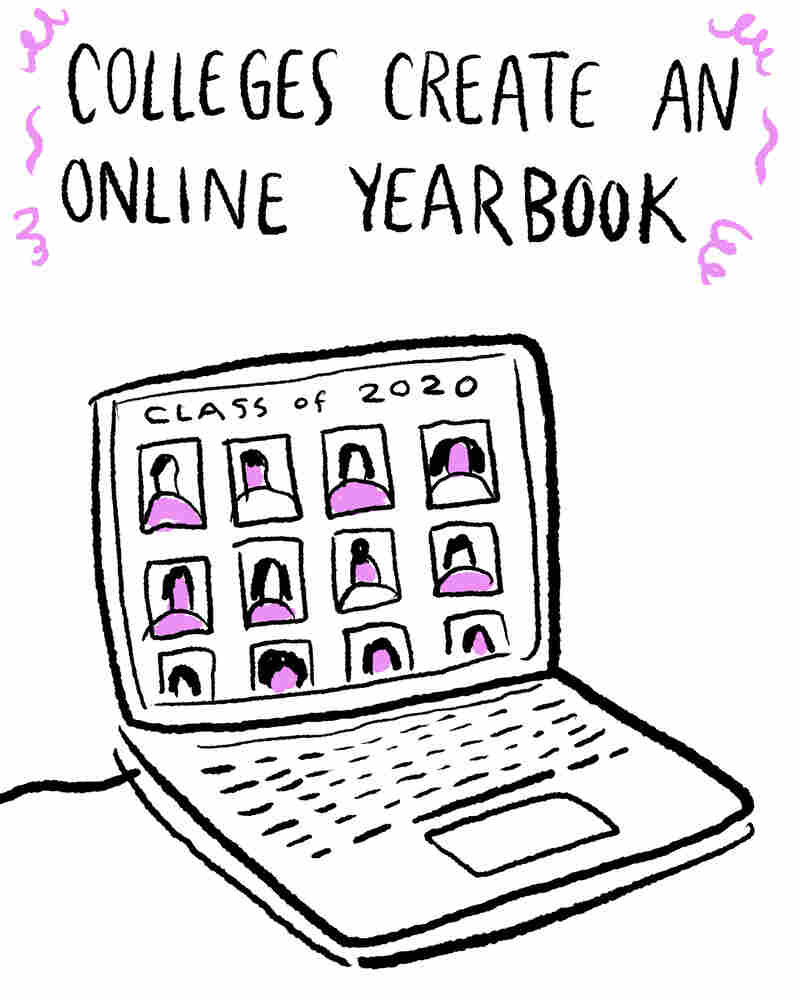 In the absence of an actual ceremony, will schools create a virtual yearbook? LA Johnson/NPR hide caption

Still others, like Trinity Washington University, a small private school in Washington, D.C., has said it's looking for a date in June to reschedule an in-person ceremony.

"If we can't do it in June, we are very committed to doing a commencement ceremony, full regalia, full pomp and circumstance," says Patricia McGuire, president of Trinity. "When we get to do it, it's going to be the biggest darn party we've ever had."

When Sandra Mendez, who's set to graduate from Trinity this May, heard the news about postponing graduation, she was heartbroken: "I have been waiting for this day since I was little."

For Mendez, graduating from college wasn't always a sure thing. After high school she took some time off, before heading to college in Wisconsin. She stayed for two years, then moved back home to North Carolina. "I was gonna give up on school altogether, just cause it was way expensive," she says.

Her family was planning to finally visit campus for her graduation ceremony. Instead, their travel plans are cancelled. She's lucky that her part-time job at Trader Joe's is still bringing in some money, and says her future plans to become a veterinarian may be on hold for a bit.

"My parents were devastated."

Celebrating graduation wasn't really about her, says Monica Ferrufino, who's finishing up at California State University, Los Angeles. It was really going to be for her parents.

"When they cancelled graduation, it was exactly 60 days prior to our scheduled commencement," she explains. She knows that because her mother and father kept track, counting down the days, crossing each one off on their calendar. When she told them it was off, her mom cried. "My parents didn't get to finish high school," she says, "so for them, seeing their daughter graduating college was just beyond their dreams."

Some ideas to celebrate

When Yolanda Norman, a professor at the University of Houston, started hearing from students disappointed about graduation, she immediately thought of her own missed graduation years ago. "I don't just empathize with what's happening, I really know what it feels like to have this moment taken away," says Norman. So she started crowdsourcing a list of ways families and schools can still celebrate. 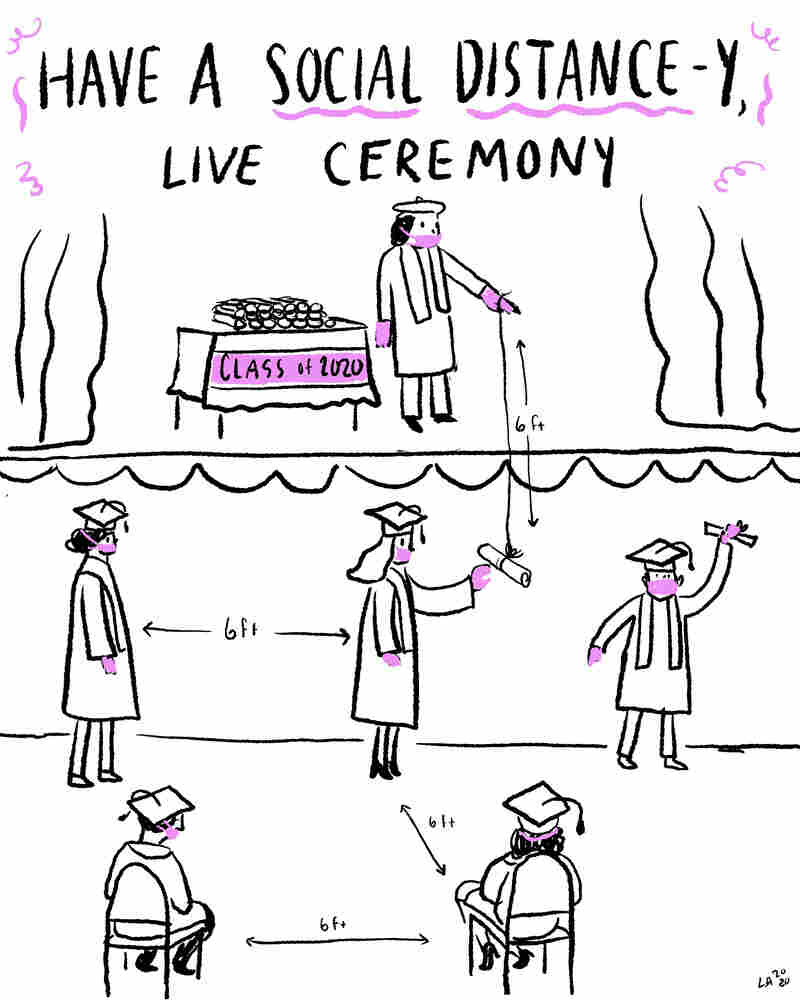 Yolanda Norman, a researcher of first-generation college students, crowdsourced a list of ideas on how schools can hold ceremonies amid the Covid-19 pandemic. LA Johnson/NPR hide caption

"Someone said: 'Can we just please have a graduation and stand six feet apart?' " she says, laughing. "It's not going to happen, but it would be awesome."

Also on Norman's list: a national ceremony hosted by a fellow first-generation college student, first lady Michelle Obama. And of course the more likely option, graduations over video chat with friends and family. "I know students' families are going to celebrate them. You better believe we're gonna have a lot of videos of backyard graduations, house graduations and quarantine graduations." She says her hope is that schools curate and share these videos so other students, parents and faculty can share in the joy.

"I'm gonna get the degree either way."

"It's just a ceremony," says Alexandrea Mares, who lives with her grandparents and attends California State University, Northridge. Right now, she says she's far more concerned with keeping herself and her family healthy. "You know what? My health and their health is what matters most," she says. "At the end of the day, it's the degree that you get and I'm gonna get the degree either way at the end of the semester."

That's not to say she isn't extremely proud of her six-year journey: "Even though we're not having a graduation, I'm still excited to get my diploma in the mail and hang it up on the wall."

She's planning on having a graduation party indoors, with just her and her grandparents. Because, she says, those are the people who really matter.