Accessibility links
Israel Faces Challenges In Fighting Coronavirus In Ultra-Orthodox Communities Ultra-Orthodox Jews make up about 12% of Israel's population — but account for many of Israel's COVID-19 cases. This week a senior rabbi finally urged his followers to obey government lockdown orders. 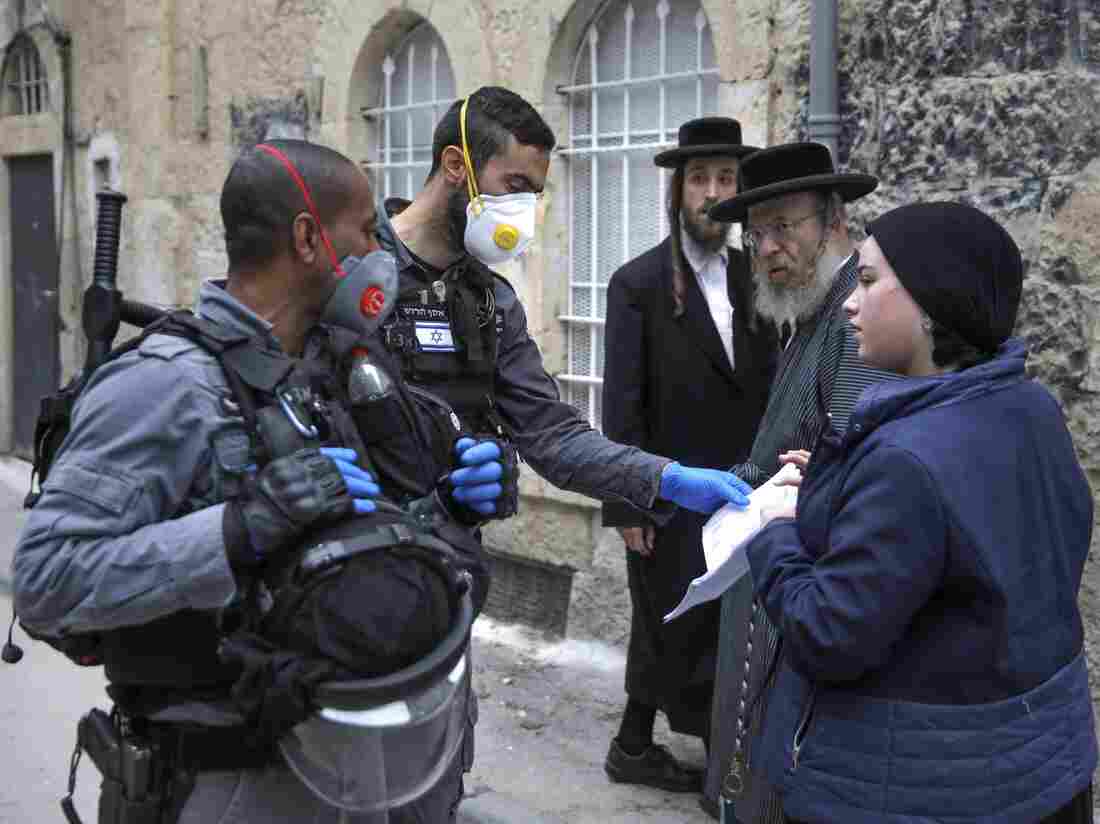 Israeli police officers wearing protective gloves and masks check papers as they enforce restrictions in an ultra-Orthodox Jewish neighborhood in Jerusalem on Tuesday, during a partial lockdown to curb the spread of coronavirus infection. Menahem Kahana/AFP via Getty Images hide caption 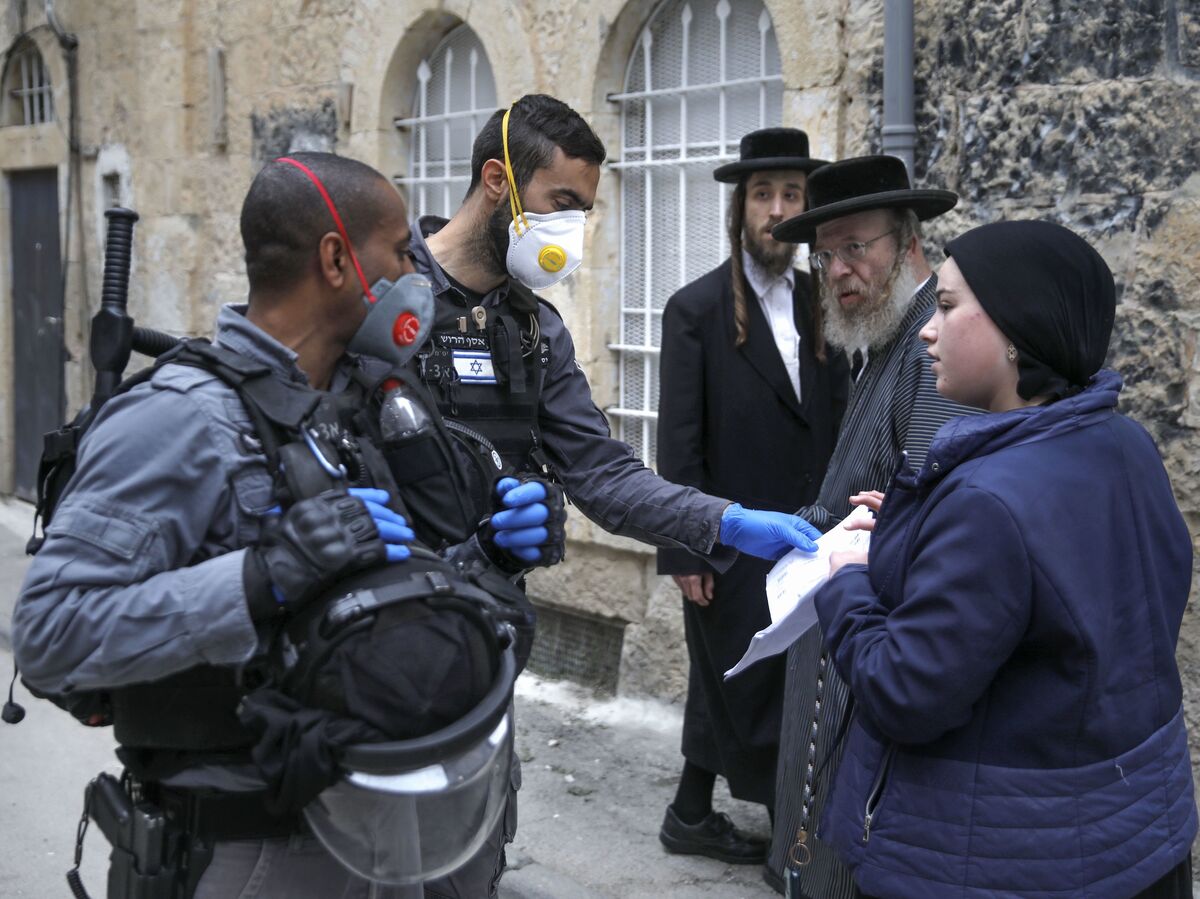 Israeli police officers wearing protective gloves and masks check papers as they enforce restrictions in an ultra-Orthodox Jewish neighborhood in Jerusalem on Tuesday, during a partial lockdown to curb the spread of coronavirus infection.

Some devout Orthodox Jewish communities have been slow to follow lockdown orders in Israel, helping drive a surge in coronavirus cases that officials are struggling to contain.

Known in Israel as Haredim, or those who tremble in awe before God, ultra-Orthodox Jews make up about 12% of Israel's population — but they account for as much as 60% of Israel's COVID-19 cases in major hospitals, according to estimates. More than 6,000 Israelis have been infected and at least 31 have died.

This week marked a turning point for the community's leadership, after a senior rabbi finally urged his followers to obey government stay-at-home orders. Many in the ultra-Orthodox community only follow the orders of rabbis, not health officials, and for weeks, many ignored government bans against large weddings and prayer services. Many do not own smartphones or TVs, leading authorities and volunteers to employ alternate methods to get the word out about infection prevention.

"Do not hold a prayer gathering! Do not gather for study in synagogues and seminaries! Anyone who defies doctors' and health officials' orders to protect against coronavirus is considered as if plotting murder and you must turn him in to authorities!" was the recorded announcement by the ZAKA emergency response organization, whose volunteers drove through ultra-Orthodox neighborhoods this week, broadcasting the warning from loudspeakers.

"Now I see a mother and a child crossing the street going into a shop," ZAKA's David Rose, himself ultra-Orthodox, told NPR by telephone from the car. "Some people are not aware of how severe this plague is going around."

"Murderers," screams a poster plastered in ultra-Orthodox neighborhoods, addressed to those who defy government orders to close synagogues and schools.

Fleur Hassan-Nahoum, a deputy mayor of Jerusalem, helped organize the posters in a private capacity.

At a recent meeting at City Hall, she says, "One of the elderly ultra-Orthodox members of the city council said, 'You're asking us to do everything against what our sages tell us to do.' It's been very, very difficult with the ultra-Orthodox community because it's just asking them to go against everything they know and everything they are."

The community turns to rabbinic texts on Jewish law for guidance on life's challenges — but the plagues and calamities of the past were never tackled through isolation. And social distancing is anathema to the Orthodox Jewish communal way of life.

Many in the community are impoverished and families can include as many as seven or eight children, all living in two- or three-bedroom apartments. To prevent the virus from spreading easily at home, authorities are preparing hotels to quarantine healthy relatives of those infected with COVID-19 in the community.

At Least 5 Rabbis From Ultra-Orthodox N.J. Community Have Died From Coronavirus

The virus is also hitting ultra-Orthodox communities in the U.S., but in Israel, the crisis highlights a long-running friction between the government and the community's leaders, some of whom initially dismissed the government's coronavirus lockdown orders.

"Israel is a Jewish state on the one hand, but it doesn't espouse the version of Judaism that Haredi society would like to see going on," said ultra-Orthodox Rabbi Yehoshua Pfeffer of the Tikvah Fund, an educational foundation. "Some of the Israeli regulations and laws are seen to be inhibited or restrictive of the Haredi way of life."

As the virus hit the country last month, Israeli Health Minister Yaakov Litzman — raised in Brooklyn, New York, and himself ultra-Orthodox — tried to convince rabbis not to allow Jews in quarantine to attend public synagogue gatherings for the Purim holiday. But up until this week, he also permitted prayer gatherings to continue — even though about a quarter of Israeli cases of infection were contracted in synagogues, according to his own health ministry. Now he himself has contracted the virus.

This week, a leading Haredi rabbi, Chaim Kanievsky, changed his mind and said his followers should self-isolate and those who ignore the government lockdown should be considered as plotting murder. The mayor of the ultra-Orthodox city of Bnei Brak, near Tel Aviv, begged residents last weekend to stop prayer gatherings. His wife got the virus.

Some ultra-Orthodox Israelis are still skeptical. Yoel Krois, who lives in Jerusalem's Mea Shearim neighborhood, an ultra-Orthodox enclave, said he is keeping his family inside more but doesn't trust the government's infection statistics.

"Whoever is a bit sick or elderly must be careful and should not leave the home, and no one should visit them," Krois said, "but forbidding young people from buying something on the street or praying, that's already going too far."

Some ultra-Orthodox Jews shouted "Nazis!" as police marched through a Jerusalem neighborhood this week, handing out large fines — some over $1,000 — to those ignoring the stay-at-home orders. To impose the restrictions, police set up checkpoints at entrances to some ultra-Orthodox areas and used drones to enforce the rules, even deploying stun grenades to disperse a crowd.

"If they would have been closed three weeks ago, the way that we asked them to, we would be seeing much, much fewer numbers today," Hassan-Nahoum, Jerusalem's deputy mayor, told NPR. "They came too late into this."

Sami Sockol contributed to this report from Jerusalem.