Accessibility links
Review: 'Hurricane Season,' By Fernanda Melchor Fernanda Melchor's poetic, foul-mouthed new novel sits on the border between crime fiction and horror: A woman known as the Witch has been murdered, and her neighbors want to know who did it and why/ 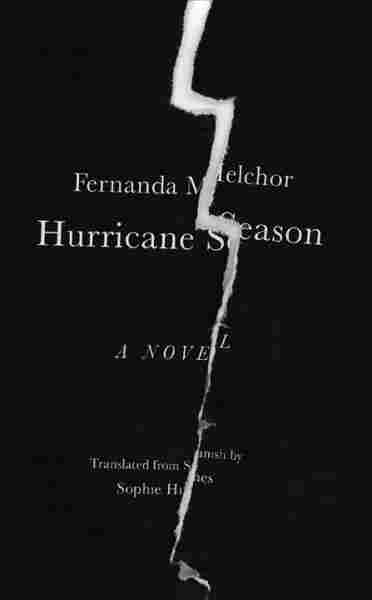 Fernanda Melchor's Hurricane Season is so strange, wild, and foul-mouthed that I almost missed the sharp critiques embedded in the story. A mix of drugs, sex, mythology, small-town desperation, poverty, and superstition, this novel spreads like a fungus from the dark center of the literary space where crime fiction and horror meet.

There used to be a witch in a small town in Mexico, but someone killed her. A group of kids discovered her body near the irrigation canals, her face damaged and her neck sliced open. Now everyone wants to know who killed her and why. Was it fear? Did someone want to protect a secret? Was it for the money she was rumored to keep in her house? A series of characters relate their lives in search of answers, and the darkness within them is as bad as the murder the town wants to solve.

Hurricane Season is a linguistic blitzkrieg — Melchor is allergic to periods and wants to explore how far she can carry a sentence without using one. The result — ably translated by Sophie Hughes — is mesmerizing; lengthy sentences that pack entire stories in them, a barrage of filthy language and obscene acts, and pacing that makes readers hold the book tighter. Sentences that take up two or three pages sound like a horrible reading experience, but Melchor pulls it off brilliantly — I never felt lost, or confused by her style, probably because the voices sound like a regular person telling someone a story instead of an author trying to impress readers with literary filigrees.

While the witch's murder is at the center of the plot, the series of unreliable narrators that tell her story constantly shift the narrative's point of view and tone. And their tales are all packed with a blend of gore, hopelessness, and brutality that pushes Hurricane Season into horror territory while also bringing themes like poverty, politics, and migration into play. And just a warning — the passage you're about to read is brutal:

... that's what those f***** do to the poor girls they abduct on their way to the border: they're put to work in the whorehouses like slaves and when they're no longer ripe for the picking, they slaughter them like lamb ...

'Hurricane Season' is a linguistic blitzkrieg — Melchor is allergic to periods and wants to explore how far she can carry a sentence without using one. The result ... is mesmerizing

Abducted and murdered women (you don't want to know what happens to the bodies) are just the start. There are abusive mothers, ruthless drug dealers, unemployed junkies, unwanted pregnancies, and constant bloodshed here. Melchor doesn't shy away from any topic — even things that will make readers cringe. However, her approach is unique: Instead of being preachy, she shows what drug abuse, poverty, alcoholism, corruption, homophobia, and misogyny do to shape people and communities. This makes Hurricane Season a rough read. Brutality abounds, and the violence, often directed at women and gay people, is so close to real events that it almost qualifies as nonfiction.

The witch is dead at the beginning of the novel, but she's still the main character because everyone has a story to tell about her — or something to blame on her. The last narrator, for example, blames her for his substance abuse and homosexual experimentation, saying it was "all on the Witch: the beers, the alcohol, and sometimes even the drugs, anything to get the gang to hang out at her place, which she seldom left."

'Black Sunday' Will Destroy You — Let It

This is the story of a dead witch, her daughter, the people around her, her murderers, and the village in which she lived. It is also a story about the kind of depravity that happens when upward social mobility is not an option. However, Melchor is never judgmental; these people are the way they are because they don't have any other options.

I don't believe in censorship, but I do believe in warnings, and readers who have a problem digesting rough language and extreme violence should know that there is plenty of both here. However, they should read it anyway — because the vocabulary Melchor uses perfectly mirrors the language used in places like the one she's writing about. The callousness and hostility present in her ugly words come from the way people trapped in poor, small towns feel; it comes from generations of unchecked machismo and lack of education. There is a lot of talk about authenticity in fiction, and Melchor achieves it through her words.

Hurricane Season is a dark celebration of language that pushes against the rules with its collection of unreliable narrators, its shifting realities, and its endless sentences peppered with Spanish and songs. Yeah, at the end of the day, Melchor is the witch and this novel is a powerful spell.