Accessibility links
Grocery Workers Keep America Fed, Fear For Their Own Safety Many low-wage workers with essential jobs — like grocery store cashiers and stockers — can't stay home to protect themselves and their families. The protections they receive vary widely. 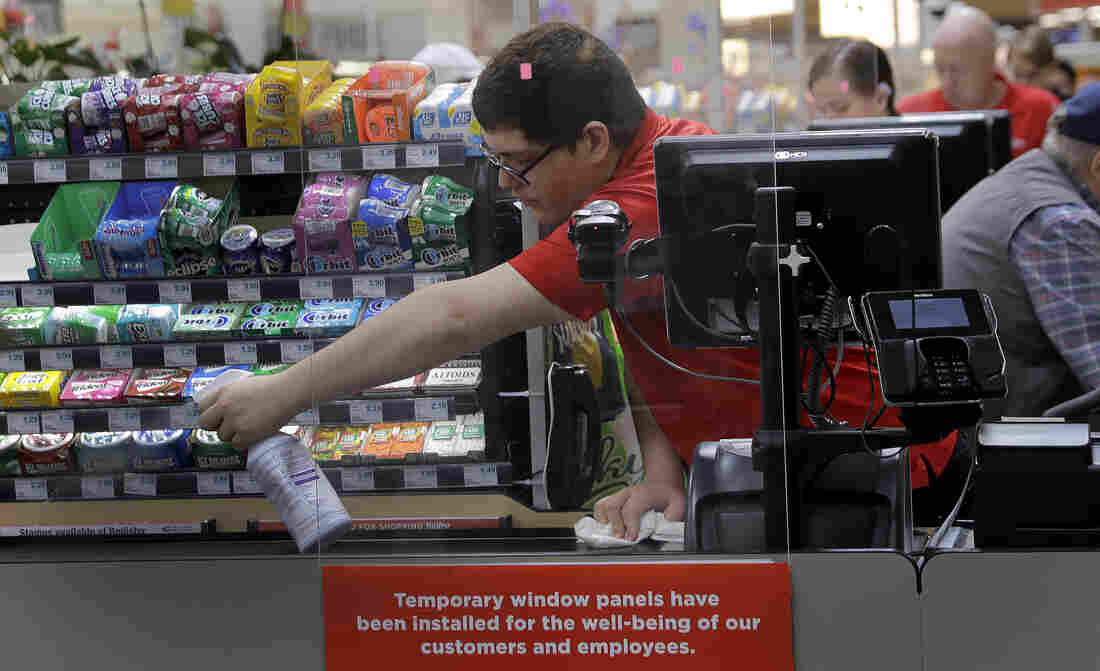 Garrett Ward sprays disinfectant behind a plexiglass panel at a Hy-Vee grocery store in Overland Park, Kan., on March 26. Stores have begun installing the shields in checkout aisles to protect clerks and help stop the spread of the coronavirus. Charlie Riedel/AP hide caption 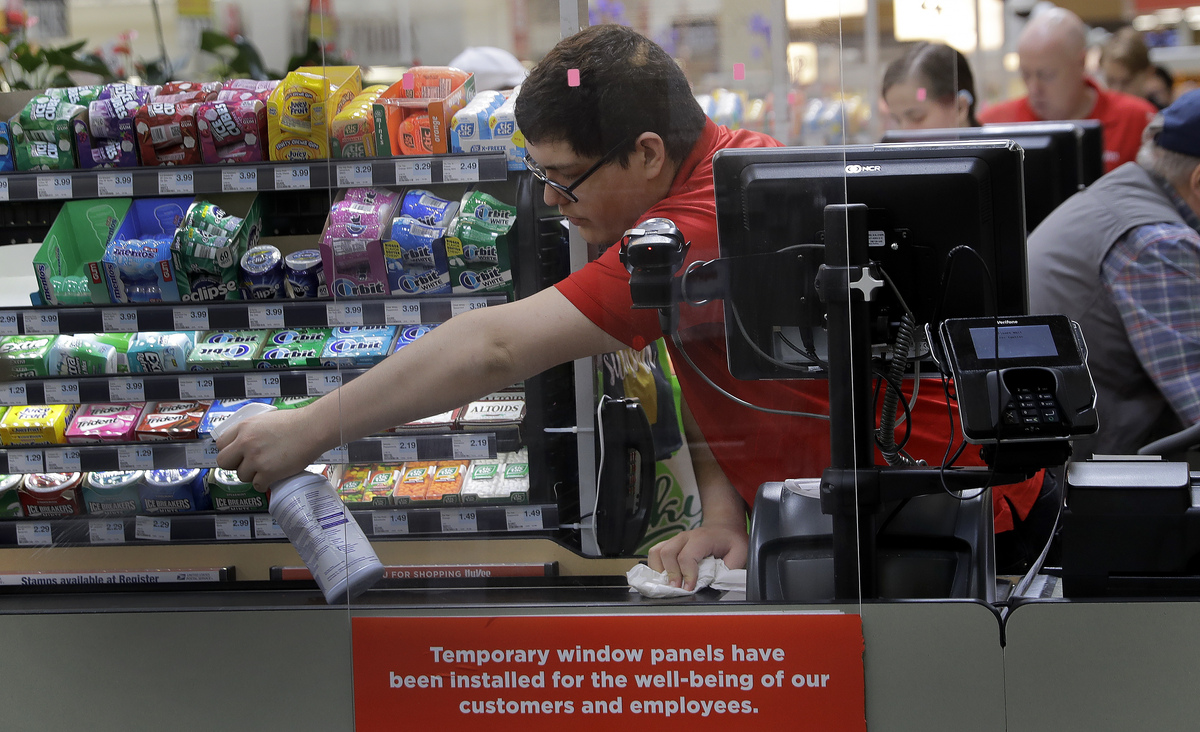 Garrett Ward sprays disinfectant behind a plexiglass panel at a Hy-Vee grocery store in Overland Park, Kan., on March 26. Stores have begun installing the shields in checkout aisles to protect clerks and help stop the spread of the coronavirus.

Not all Americans can stay home during the pandemic.

Millions of essential workers are showing up for their jobs at warehouses, food processing plants, delivery trucks and grocery checkout lines. Work that is often low-paid, and comes with few protections, is now suddenly much more dangerous.

America has a new appreciation for these workers. Bill Osborn, a dairy clerk at a Giant in La Plata, Md., says he never used to be thanked for his job. Ever.

But now that has changed.

Courtney Meadows, a cashier at a Kroger in Beckley, W.Va., calls it a welcome change. But she also sees some irony in this newfound appreciation.

"It's definitely eye-opening," she says. "Because people are now saying, 'Oh, my God, these people deserve hazard pay.' But these are the same people who say we don't deserve $15 an hour."

The Diary Of A Grocery Store Worker During The Epidemic

The Diary Of A Grocery Store Worker During The Epidemic

For a shopper, stepping into a grocery store is a necessary risk they might face once a week, or even less frequently. For a grocery store clerk, that exposure happens every day — over and over again — as a parade of people pass by them just a few feet away.

Safety precautions like these vary between companies, with some workers expressing deep concerns about a lack of safeguards or protective gear.

Paid sick leave is also a common concern. Many grocery workers are not guaranteed any sick leave under normal conditions, and sick leave during the pandemic is sometimes contingent on a positive test for COVID-19, which can be difficult to obtain given test shortages.

Osborn and Meadows have a union that fought for protections. Some other workers are trying to organize: This week, some Instacart, Amazon and Whole Foods staffers have protested and walked off the job to push for basic safety measures.

"We know that our customers count on our 68,000 associates to be there for them," she says. "And we have continued to remind them of the importance of being diligent and caring for themselves."

Food Lion is also trying to hire more workers to help with the crunch, and like many stores they're offering extra "appreciation pay" during the crisis, though Ham wouldn't say how much. Many other stores are offering an extra $2 an hour.

Some corporations that usually resist calls for sick leave and higher pay have changed their tone in this pandemic, says John Logan, a professor and director of labor and employment studies at San Francisco State University.

"It sounds crazy now that people ever doubted that these workers who are really keeping society functioning to a large extent were ever not worth $15 an hour or should ever have been denied paid sick leave," he says.

But he notes that companies' policy changes are temporary, just for the duration of this crisis. It's an open question whether all this new appreciation will last.

And the protections are piecemeal — different stores have different approaches, and different levels of commitment to worker safety.

Logan says local and state authorities can help by requiring all stores to practice safety measures like installing plastic shields, allowing hand-washing breaks or limiting the number of people allowed inside stores at one time. Some areas have policies like this in place; many don't.

In some cases, governors classifying grocery store workers as essential or as emergency workers can help them access services like child care. Logan says states could go further and treat grocery staff as first responders, helping them get access to protective gear like masks and gloves.

Grocery store workers also say they want shoppers to think about the risks they're creating.

"A lot of our customers are coming in in masks, and I appreciate that," says Amanda Casaburri, who works at a Kroger near Fort Worth, Texas. "I'd like to think that it's not just for their health but it's for ours."

When she's restocking dry goods she's constantly thinking about every surface she touches. She worries about catching the virus and spreading it to others.

"I just don't see how it's possible that a huge majority of grocery store workers are not going to get sick," she says. "Are we gonna lose some of our co-workers to this? It's absolutely possible."

Casaburri says she sees some customers lingering in aisles, with no sense of urgency. She urges shoppers to bring a list, get in and get out.

"I just wish everyone would take it a little bit more seriously," she says.