Accessibility links
Trump Turns To Online Campaigning Amid Coronavirus Pandemic Rallies at which President Trump would tout a booming economy were to be central to his 2020 reelection campaign. The coronavirus has changed everything.

His Signature Rallies Are Off, So Here's How Trump's Campaign Has Moved Online

His Signature Rallies Are Off, So Here's How Trump's Campaign Has Moved Online 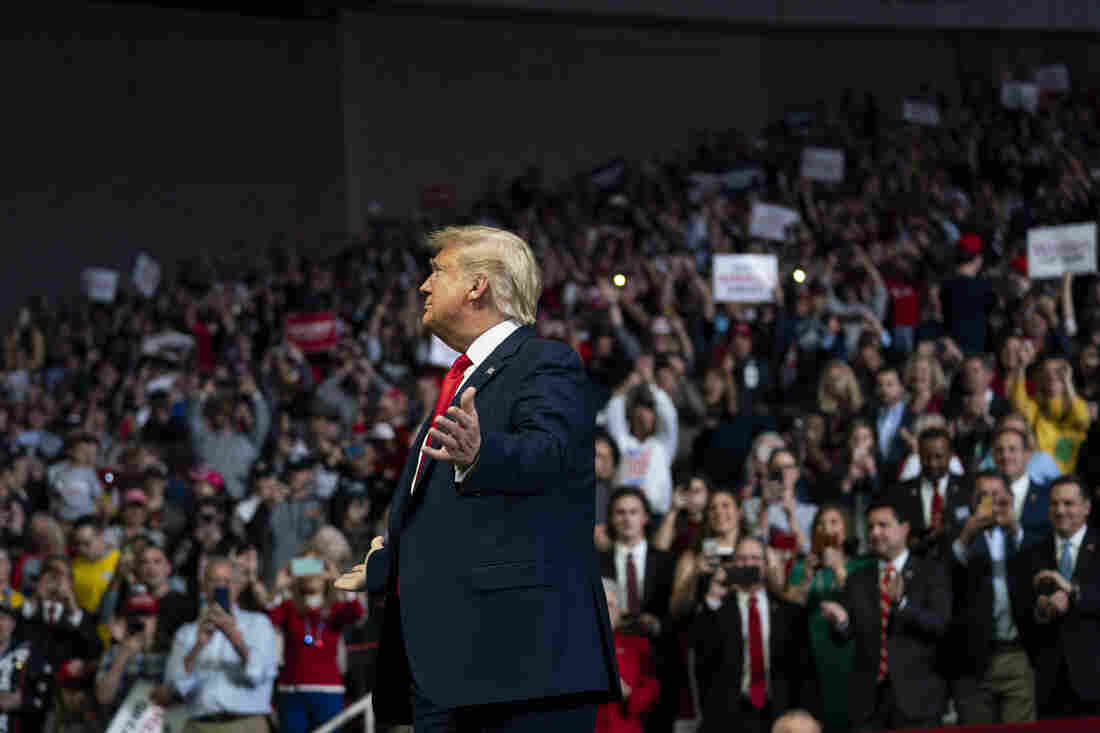 President Trump has not been able to hold campaign rallies since this one in Charlotte, N.C., on March 2 because of the coronavirus pandemic. Evan Vucci/AP hide caption 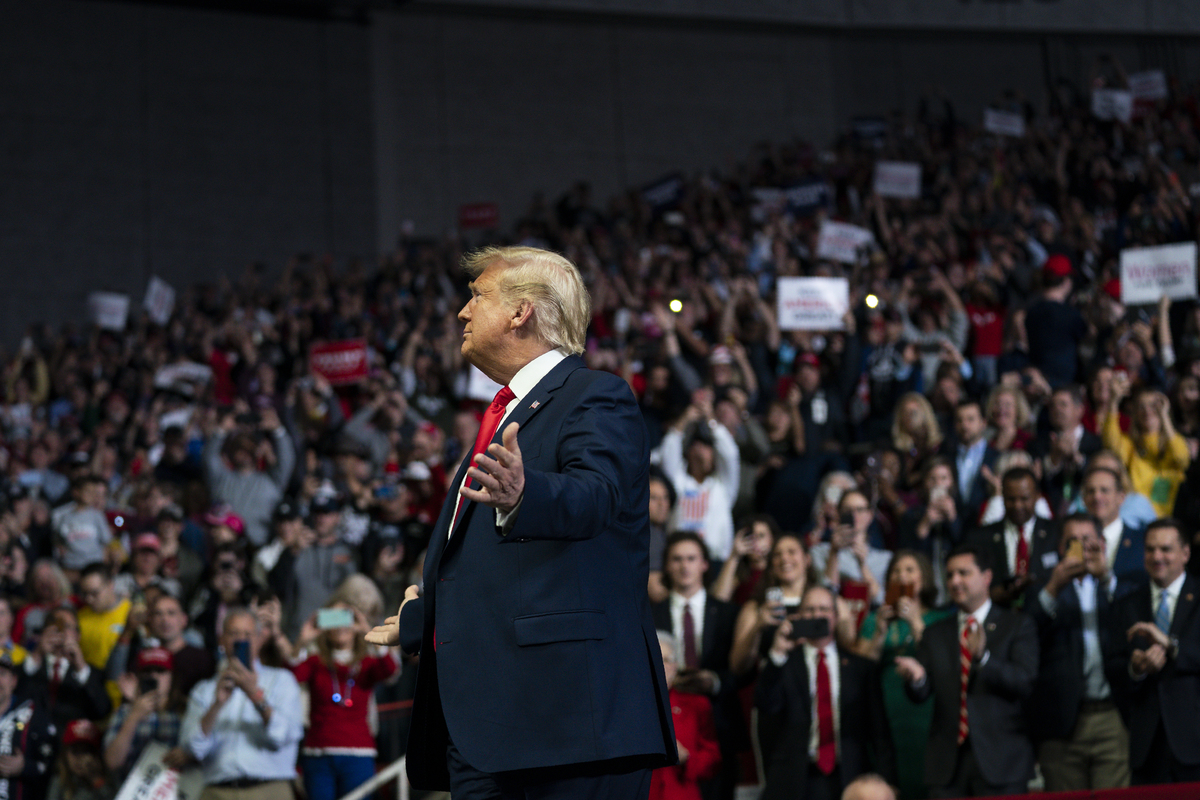 President Trump has not been able to hold campaign rallies since this one in Charlotte, N.C., on March 2 because of the coronavirus pandemic.

It has been only a month since President Trump held his last campaign rally. It was March 2 when several thousand people squeezed into a North Carolina arena to cheer on a confident president seeking reelection at a time of peace and prosperity.

Trump touted the record low unemployment rate to rousing applause, repeating the theme of his 2020 campaign.

"Jobs are booming in our country, incomes are soaring, poverty has plummeted, confidence is surging," said the president.

And so Trump's campaign would have gone, a big arena rally once a week, building up to more as the general election nears. An army of door-knocking volunteers to make sure that the hundreds of thousands who attended a Trump rally are registered to vote.

But a campaign plan that made sense a month ago has run headlong into the coronavirus pandemic.

Almost overnight, millions have lost their jobs as measures to slow the spread of the virus forced business practically to a halt. More than 5,000 Americans have died from the disease as of Thursday morning, and Trump recently said that if 100,000 Americans die, "we all, together, have done a very good job."

Trump and his campaign no longer talk about a strong economy in the present tense. At this point, the campaign's message is all about the coronavirus.

"We are supporting President Trump's exceptional leadership and highlighting the work being done to keep Americans safe and healthy during this unprecedented time," said a campaign aide on background when asked how the reelection effort was adjusting. 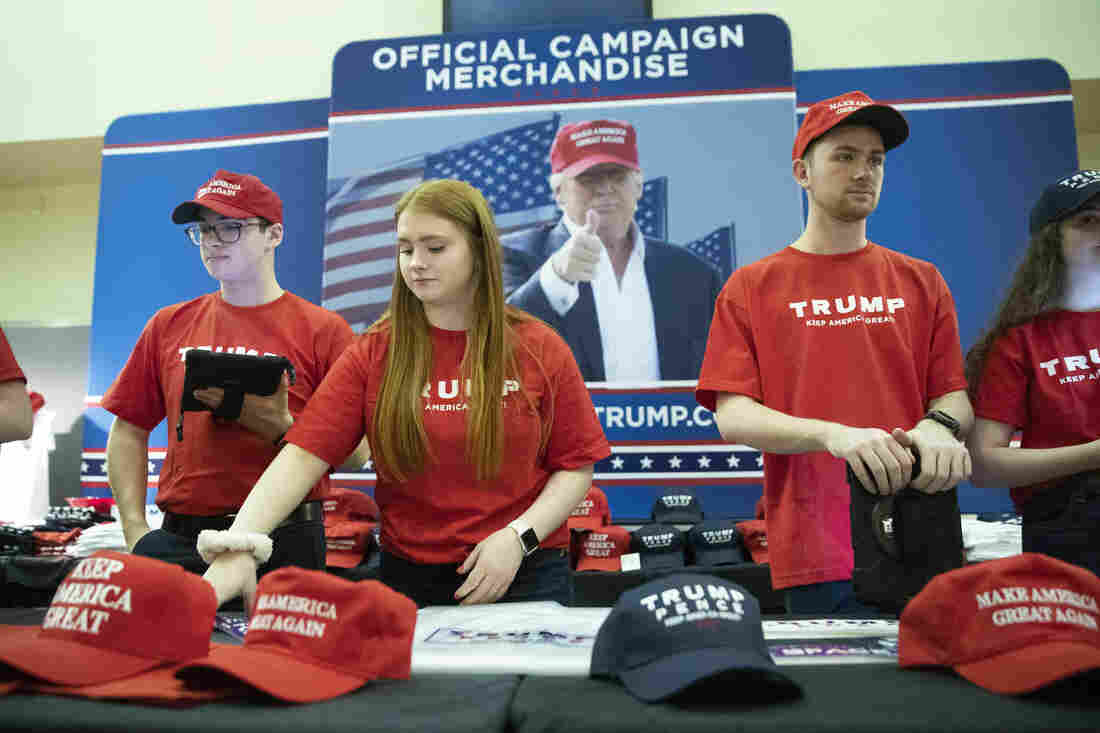 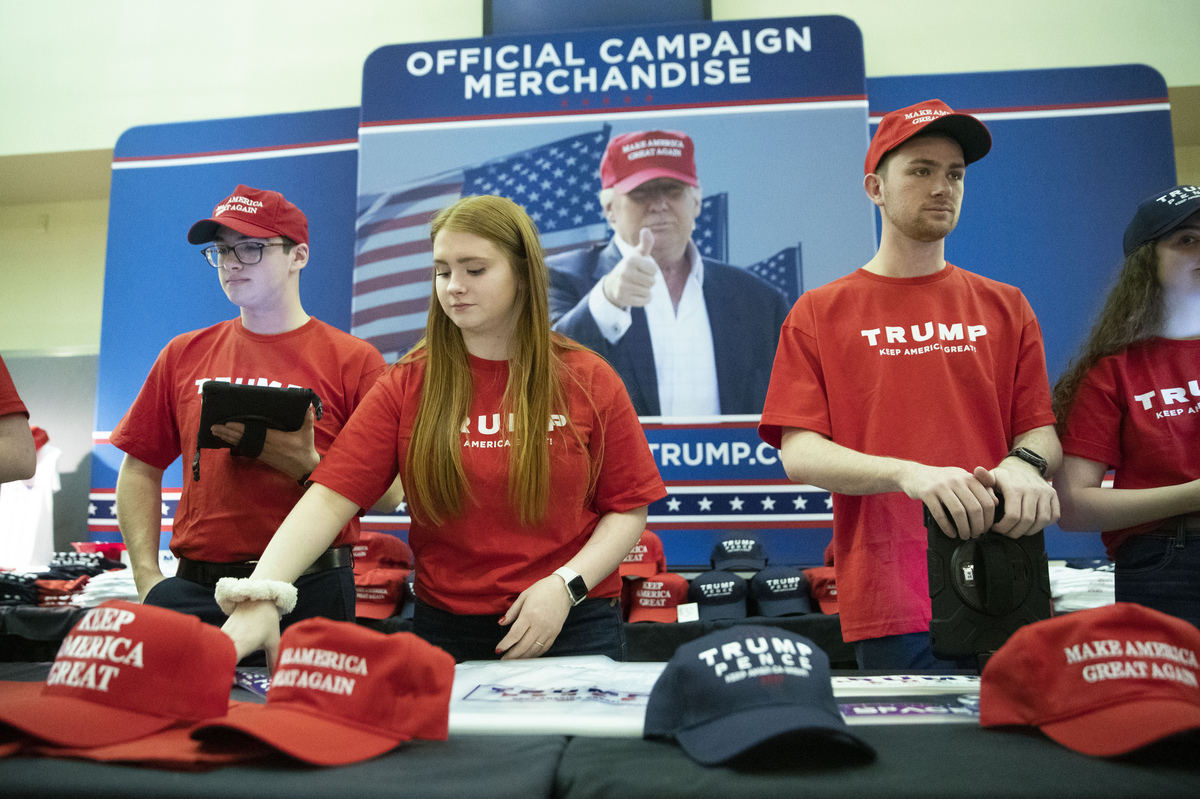 Volunteers prepare to sell official Trump merchandise before a campaign rally on Feb. 10 in Manchester, N.H. With rallies and in-person organizing no longer possible, the Trump campaign has moved online.

The Trump campaign's headquarters in Virginia are closed because of the state's stay-at-home order. Staff are working from home and have started doing virtual events — something Trump's Democratic opponents are also doing.

Kicking off a streaming event last week, Lara Trump, the president's daughter-in-law, told viewers, "We're so happy to have you join us. This is a first for us."

She was joined by campaign spokeswoman Kayleigh McEnany and national political director Chris Carr, all beaming in from their respective homes. The streamed event included tips for surviving life stuck at home, information on volunteering for the campaign, a dash of media bashing and a plenty of praise for Trump.

"Right now the president is saving lives across this country," McEnaney said at one point. "This could have been so much worse."

There were video and audio problems. At one point, McEnany disappeared, replaced on screen by a black box with a question mark. Despite the glitches, the video has been watched about a million times across various platforms.

Everything about the campaign has also been forced to move online. In mid-March, just as Trump was announcing his administration's initial social distancing guidelines, the campaign and the Republican Party were supposed to be launch a nationwide week of in-person volunteer training events.

This is what the most cutting edge & versatile grassroots organization looks like⬇️#LeadRight #nhpolitics pic.twitter.com/t3c8ZCvNvZ

"We said, 'You know what, we're going to make this switch to completely virtual,' " said Elliott Echols, the national field director for the Trump Victory Campaign. "Everything we have scheduled we're going to get it switched over."

According to Echols, within 24 hours, the training sessions moved from living rooms and field offices to Zoom meetings, forcing many volunteers to adjust to a new technology.

Those training sessions culminated in a day of action, with volunteers and organizers making more than 3 million phone calls. But the recommended call script was anything but a standard campaign call. Volunteers were asked to check in on how people were doing and direct them to coronavirus.gov.

Echols says that on one of these calls, a campaign organizer spoke to an elderly woman in Florida afraid to go grocery shopping. So, the organizer asked for a list and delivered the groceries to her door.

"That's what it's about," Echols said. "Our program is built off of relationship organizing."

NPR asked to speak with the Florida woman, but the campaign did not make her available.

The campaign uses voter contact apps that work from a computer or cellphone. If the call goes to voicemail, the app automatically plays a prerecorded message from Lara Trump urging voters to "stop the spread of coronavirus by practicing social distancing, good hygiene and making sure to wash your hands."

Echols looks forward to a day when people can return to public spaces and start knocking on doors again.

"We're going to flip that switch again and the volunteers that were making the calls, they're going to be back at those people's doorsteps continuing the conversation with them," he said.

Down the road, the campaign hopes the familiarity that volunteers get from using the voter contact apps now will allow them to work in campaign calls at free moments during the day this summer and fall, said Mandi Merritt, national press secretary for the Republican National Committee.

"It allows them to make calls on behalf of the president at a time that is convenient for them," said Merritt. 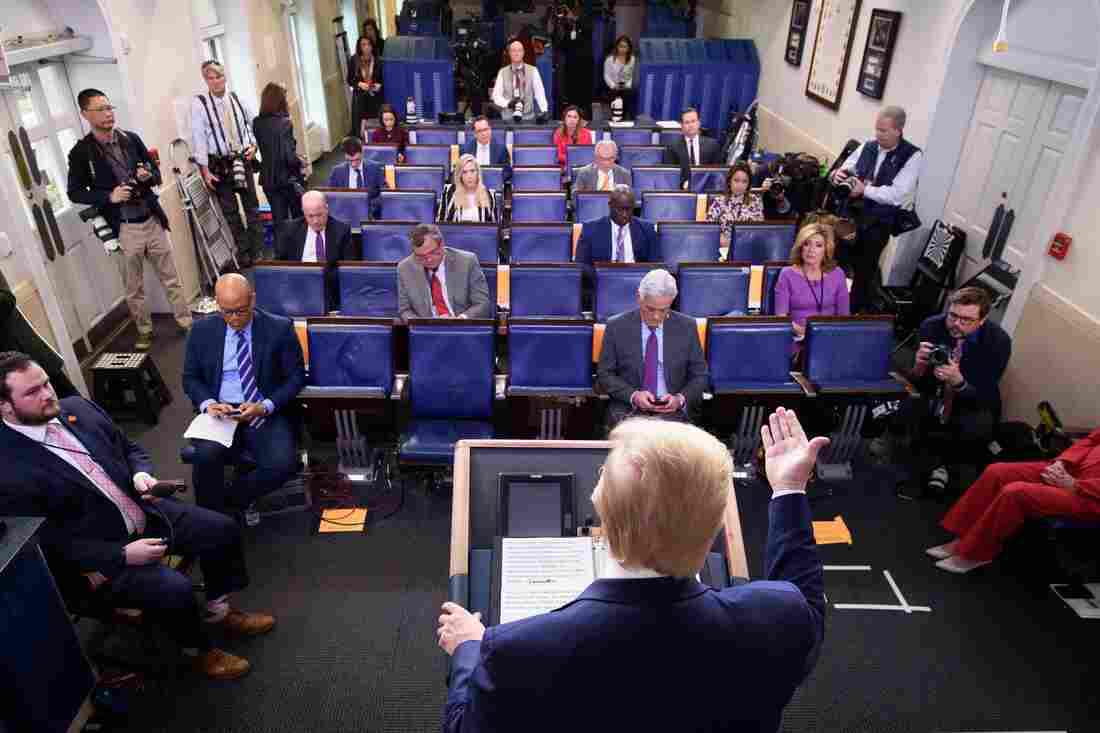 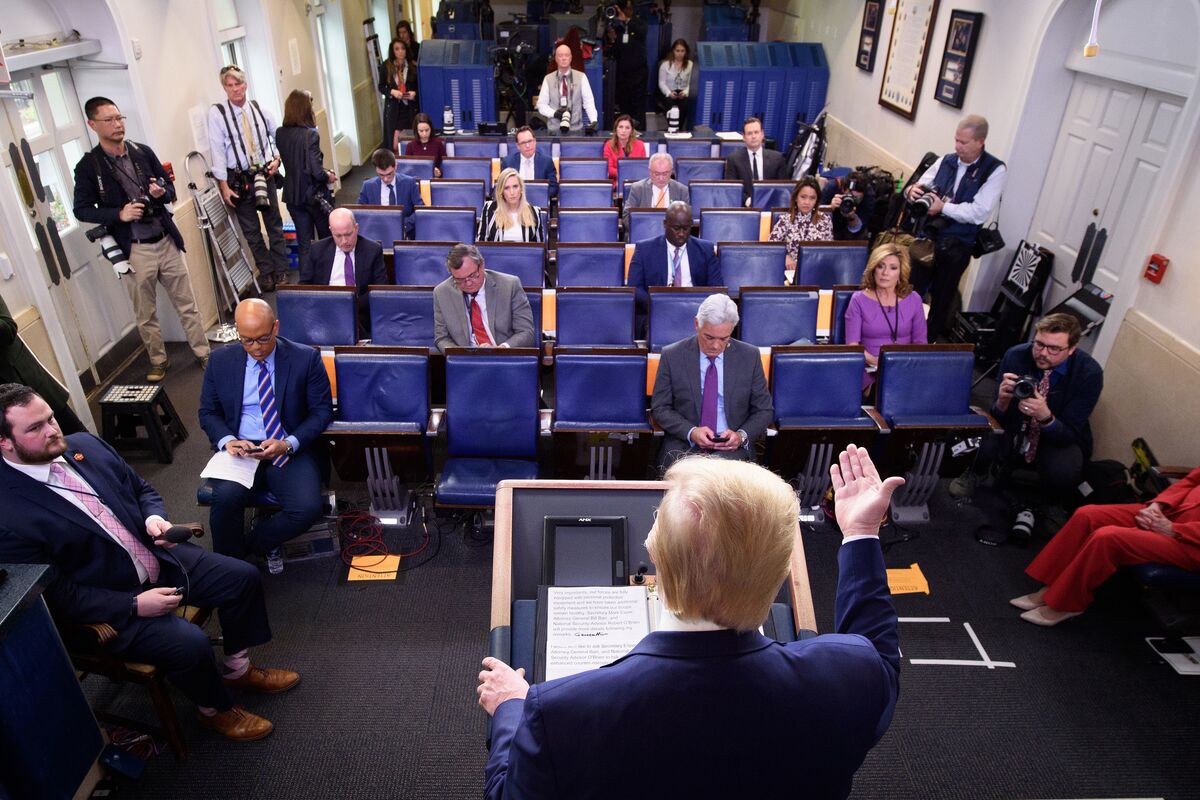 So far, the campaign isn't running ads about the coronavirus or Trump's response to it. But it may not be necessary.

Recent polls show a small bump in Trump's approval rating as he holds daily press briefings about the coronavirus. The rallies may be gone, but Trump has a more direct line into American homes than ever before.

This helps explain why Democratic groups have started to run ads aimed at countering Trump's daily briefings, drawing attention to statements he has made in recent weeks that have turned out to be off-base and wrong.

"The fact that he chooses to use that pulpit to share misinformation and to deceive, I think is the challenge," said Guy Cecil, the chairman of Priorities USA, a Democratic super PAC. "And I think that's why you find more of us who are willing to apply pressure to bring attention to some of the misinformation."

He ignored intelligence.
He ignored experts.
He ignored science.
As the number of sick skyrockets, Trump thinks he's done "one hell of a job."
Watch the updated ad Trump doesn't want Americans to see and help us continue to hold him accountable.https://t.co/ZeRIriA3Y8 pic.twitter.com/2in9JP6ire

The Trump campaign sent a cease-and-desist letter trying to get a recent Priorities USA ad taken down, saying Trump was quoted out of context. Instead, Priorities USA increased the size of its ad buy.

The political stakes are high. Trump's fate in November could well be determined by whether the public blames him for the death toll or credits him for it not being worse.