Accessibility links
The 1918 Flu Pandemic Was Brutal, Killing More Than 50 Million People Worldwide "We had no ICUs at that time. We had no antivirals, had no vaccines for flu. We had no idea that the flu was even a virus at that time," one scholar said. But social distancing helped then too. 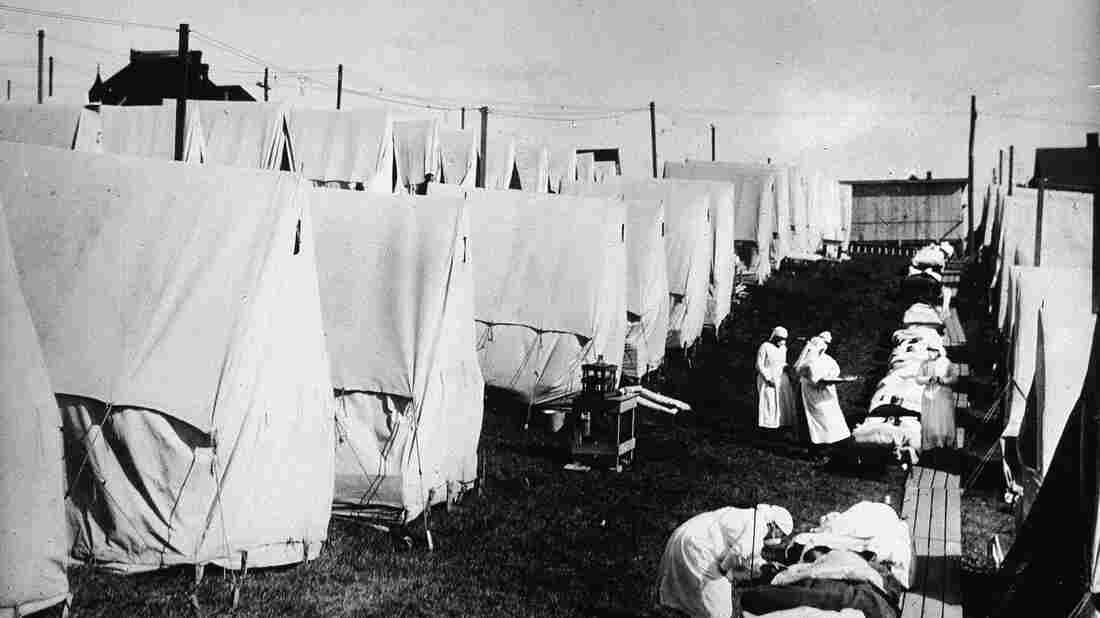 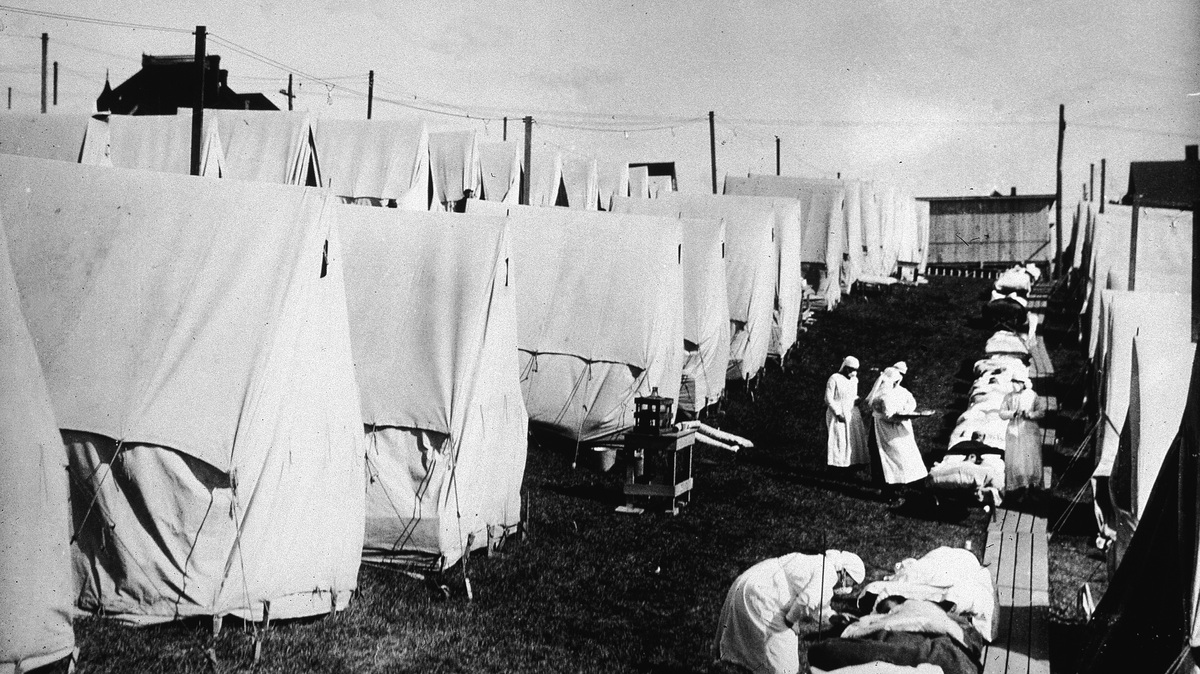 Nurses in Lawrence, Mass., care for victims of the flu epidemic in 1918.

Almost exactly 100 years ago, one-third of the world's population found itself infected in a deadly viral pandemic. It was the Spanish flu. Its death toll is unknown but is generally considerd to be more than 50 million.

"The death rate in 1918 was very high ... somewhere between 2 and 2 1/2%," Nancy Bristow, a history professor at the University of Puget Sound in Tacoma, Wash., told NPR.

Some reseachers have estimated a death rate as high as 10 to 20%.

During World War I in Europe, the flu struck troops and civilians in the spring of 1918 and it flared up later in the U.S., where 675,000 people died.

In the fall of that year, a second wave of the virus engulfed the globe, Bristow said. The young and the old were hit hard, but middle-aged, otherwise healthy individuals also suffered; those aged 20-40 accounted for about half of the deaths in the pandemic.

"What's remarkable is this was contagious enough that it appears to have landed in places for which there's no apparent contact," Bristow said, citing an Inuit village in Alaska, where 72 out of 80 residents died from the 1918 flu over the course of five days.

Around 50 to 100 million people were killed worldwide, according to Amesh Adalja, an infectious disease physician and senior scholar at the Johns Hopkins Center for Health Security. He puts the death rate from the 1918 epidemic at about 1 to 2% globally.

Other academics have estimated the death rate from the pandemic to range from 10 to 20%.

All the numbers are best estimates. "In 1918, death certificate recording and epidemiology was really in its infancy," said Adalja. "We didn't have all of that data. And there were many parts of the world that were not connected to other parts of the world. So you weren't able to get data from some of the resource-poor areas that existed at that time."

As much as medicine is struggling with the current illness, doctors had even less to fight back with a century ago.

"The 1918 pandemic was the most severe pandemic that we have on record," said Adalja. "We had no ICUs at that time. We had no antivirals, had no vaccines for flu. We had no idea that the flu was even a virus at that time."

One thing is for certain, the 1918 pandemic proved that social distancing is effective, according to Bristow.

"In 1918, we applied social distancing but didn't know that it worked or not; now we know," she said. "It's very inconvenient, but it is clearly the easiest thing, it's a way that every human being can be involved and can participate in fighting this virus, and the outcomes will be positive. "

In a previous version of this story, we incorrectly said a third of the world's population in 1918-1919 died of Spanish flu. Actually, a third of the world's population became infected. In addition, the story had quoted President Trump as saying those who had the Spanish flu had a 50/50 chance of survival. That number does not match what has been found by experts and government and private research institutions. Also, the story said academics generally agree that 50 to 100 million were infected. The most common estimate of Spanish flu cases is about 500 million