Accessibility links
Bloomberg Campaign Staffers Speak Out, Alleging Broken Promises Mike Bloomberg's presidential bid didn't last long, but he promised staffers jobs through November. Now some who were abruptly laid off during a pandemic are detailing how they say they were misled. 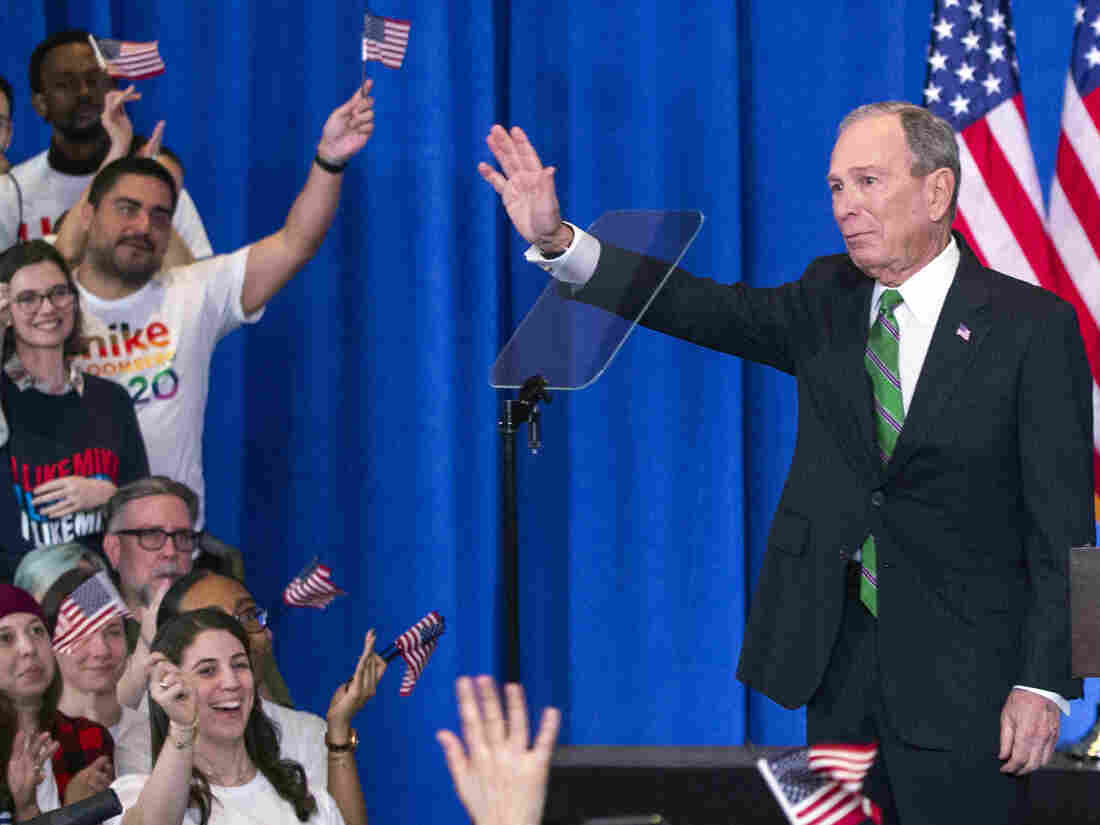 Former Democratic presidential candidate Mike Bloomberg announced that he was suspending his campaign in March. His former staffers say they were promised jobs through the general election, even if he was not the nominee. Eduardo Munoz Alvarez/AP hide caption 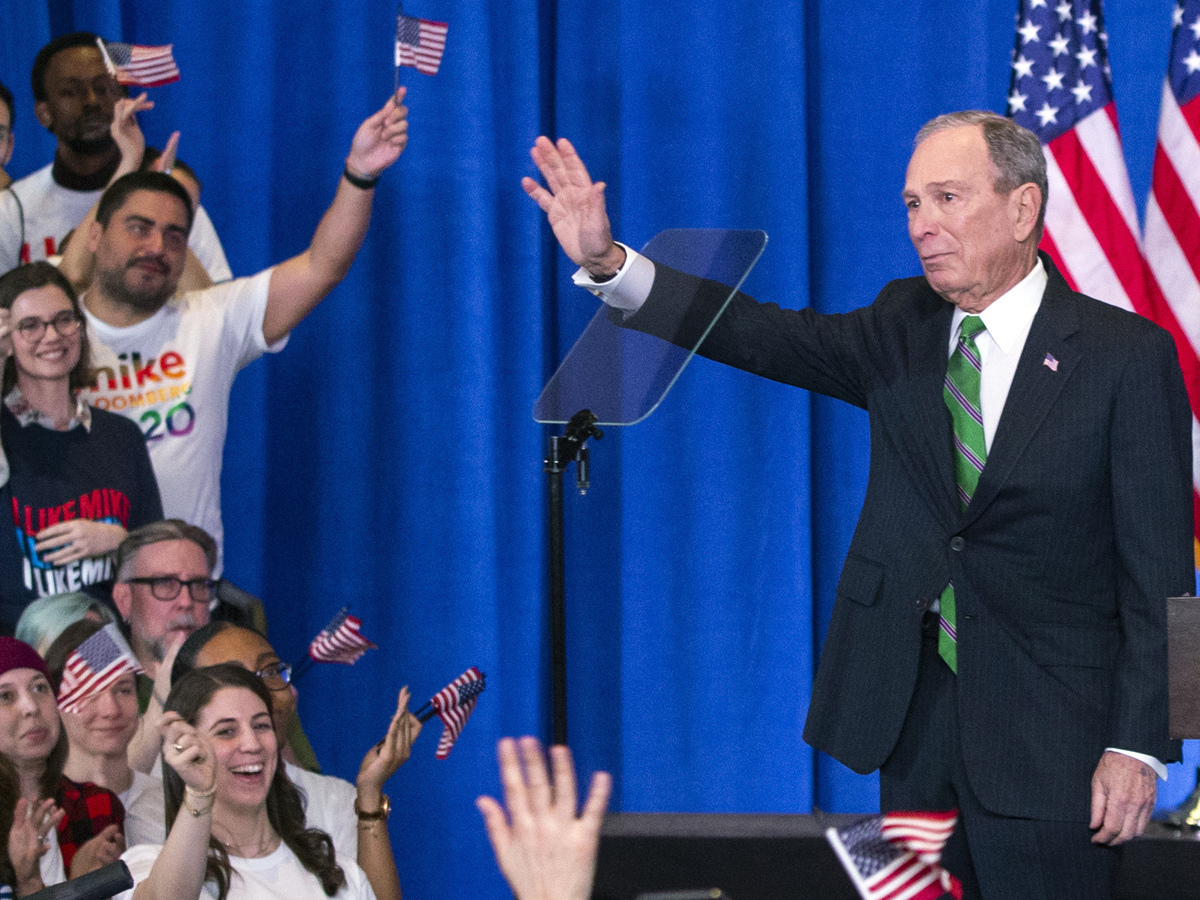 Former Democratic presidential candidate Mike Bloomberg announced that he was suspending his campaign in March. His former staffers say they were promised jobs through the general election, even if he was not the nominee.

When Amol Jethwani interviewed for a job on Mike Bloomberg's presidential campaign in December, the benefits were unlike anything he had heard of for political campaign field workers.

"They offered an incredible benefits package, which is unheard of for field staff, offering $8,000 a month for a regional role in addition to health care, technology, laptops, cellphones," said Jethwani.

Bloomberg also offered something else: a job through the general election, even if he was not the Democratic Party's nominee. Jethwani signed on as a regional organizing director. As part of his job, he interviewed potential field staffers, giving them the same assurances. "That employment is guaranteed through November, location is not," Jethwani said.

Bloomberg's four months as a candidate represented the most expensive presidential candidacy in history. He amassed a staff of more than 2,000 people, including an enormous field operation that he and his aides promised would work through November to defeat President Trump, no matter what.

But now much of that army of field staff is out of work, having been laid off by the Bloomberg campaign and struggling to recover while hiring has slowed down as the nation grapples with the coronavirus pandemic. They are also speaking out publicly about what they say were false promises made by Bloomberg's campaign.

Matthew Jeweler, who worked as a regional organizing director and Colorado digital director, gave up an IT job he had had for 10 years to join Bloomberg's campaign, hoping to make a career pivot.

During the interview process, he said he confirmed repeatedly that the job would last through November.

"I honestly don't know if I would have taken the job if it weren't for that specific guarantee, because I knew I wanted to work on the general election," Jeweler said.

After a disappointing showing on Super Tuesday, Bloomberg dropped out of the race. He endorsed former Vice President Joe Biden and promised to put the force of his massive operation behind Biden.

Jeweler said he learned that Bloomberg had dropped out online — many staff hadn't been told before the news broke: "I had people texting me saying, 'Why did I just find out that we dropped out from a New York Times article, or something that we heard on the radio?' "

Jeweler said that even though the primary campaign was ending, he still hoped that most field staffers would have jobs moving forward.

Instead, there were two rounds of staff layoffs.

In the first round, hundreds of staffers across the country were let go, told that they would be paid through March 31. They were encouraged to apply to work for Bloomberg's organization in battleground states.

Then, Bloomberg abandoned his plans to form a new independent entity and announced that he would instead give $18 million to the Democratic National Committee for the party's battleground states program, and he transferred the leases for some campaign offices to state parties. In a memo at that time, Bloomberg's campaign said that even though it had considered forming an independent group, "this race is too important to have many competing groups with good intentions but that are not coordinated and united in strategy and execution."

"We reached out to every single organizing staffer in those six states as well as others and asked them to consider continuing this work through November, with the DNC, in those states or others the DNC is prioritizing," the statement said. "Already, hundreds of former Bloomberg campaign staff have been contacted and are in the hiring pipeline to join the DNC organizing efforts — which would not have happened without this campaign's transfer of funds."

But the workers were let go without guarantees.

Donna Wood in Miami lost her job on a March 20 conference call.

"It was a low blow. I felt very used and very kicked to the curb."

"It was read off a script from HR, and then it was like, 'Goodbye, you can hang up now,' " she said in an interview. "It was a low blow. I felt very used and very kicked to the curb, after all that I had given to the campaign in the short time that I did work for it."

Asked how he feels now about the assurances he made as a recruiter to potential staffers, Jethwani said, "Mike borrowed my credibility and abused it in that moment." 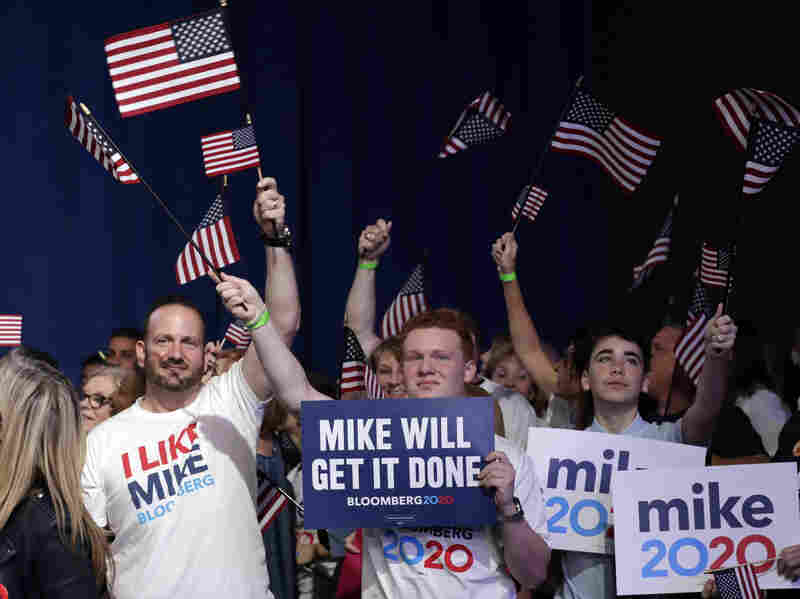 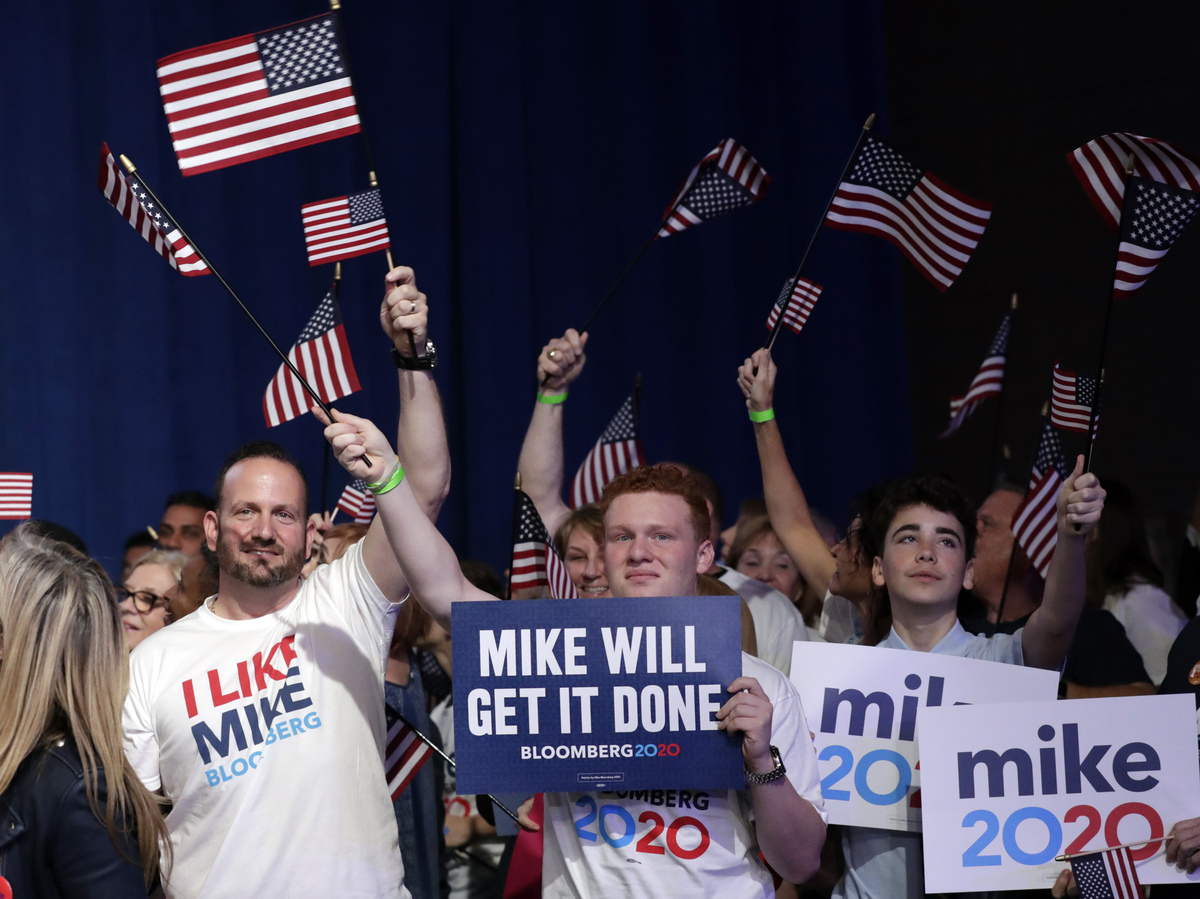 It has grown from one plaintiff to roughly 80.

The complaint in Wood's case alleges that the Bloomberg campaign "deprived [staff] of promised income and health care benefits, leaving them and their families potentially uninsured in the face of a global pandemic."

"I just know what I was promised, and I'm a woman of my word. I would just think other people would be the same," said Wood. "If you repeatedly tell someone something and assure them that you'll be transitioning to an independent expenditure, that that would happen."

One of Wood's lawyers, Gregg I. Shavitz, argued that without the promise of work through November, Bloomberg field staffers may have chosen to pursue other opportunities.

Another proposed class action lawsuit was filed the same day by former Bloomberg field staffers in Georgia, Utah and Washington. That complaint alleges that after Bloomberg lost the Democratic nomination, "his campaign
unceremoniously dumped thousands of staffers, leaving them with no employment, no income, and no health insurance."

It adds that "thousands of people who relied on the Bloomberg campaign's promise are left to fend for themselves."

"We want people like Mike to know, and the people in the party who benefit from Mike's philanthropy to know that it is not OK to discard us as though we're mere tools," Jethwani said. "We are essential infrastructure to what results in wins for candidates up and down the ballot, again and again and again."

Campaign manager Sheekey pointed out to NPR that staff worked 39 days on average and were given several weeks of severance and health care through March.

Staffers received an email late last month from campaign human resources, letting them know that a fund had been established to cover the cost of health insurance through April.

"Given these extraordinary circumstances, we have worked to establish a special fund to cover the cost of COBRA through April," the unsigned email said. "This is aimed at those who are not able or interested in continuing on with the DNC in battleground states through the hiring effort announced on Friday, and who have not already secured replacement healthcare coverage."

The campaign hopes many of its former staffers will be hired by the DNC in that time.

While the former workers say Bloomberg's campaign promised them continued employment, they acknowledge they signed at-will contracts, meaning they could be let go at any time.

"The point isn't the contract that we signed that said at-will," said Jeweler. "It's the countless conversations that 2,000 former staffers had with hiring people who all said you have a guaranteed job through November. It's written on official interview documents that they used internally."

NPR has reviewed copies of internal interview notes provided by a former campaign aide that include "employment through November 2020 with Team Bloomberg (not guaranteed location you are at now)."

Many staffers expressed frustration that Bloomberg extensively self-funded his campaign but doesn't appear to be making good on the things that made thousands of people work for him.

"The man spent $500 million on ads alone in a four-month period," said Jeweler. "He could spend 10% of that and give every single one of his field staff their entire salaries for the remainder of a year."

Attorney Ari Wilkenfeld, an employment law litigator who is not involved in these lawsuits, said that he sees these types of cases all the time and that it will likely be an uphill battle for Bloomberg's former staffers.

"Everybody wants to think that their new job is going to be great and their new boss that hired you is going to be genuine," Wilkenfeld said. "There's a psychological impediment to saying, 'Hey, Brand New Boss, you've made some promises, can you put them in writing?' Unfortunately, the new boss probably knows that. That's why they make promises in writing that they're willing to commit to, and verbally ones that they're not sure of or can't commit to."

Some staffers receiving their final paychecks this week are also facing another issue, receiving less money than they were anticipating.

Multiple staffers said they were told that if they kept their Bloomberg-issued iPhones and MacBooks, they would be taxed on their 2020 returns.

"How they did it instead, was they added it as supplemental income on all of our paychecks, meaning it put some of us in a different tax bracket, meaning we got taxed at a higher percentage," Jeweler said. That means some people saw withholding for as much as $700 or $800, including Jeweler.

The campaign informed staff after the fact that they can receive refunds if they return the devices.