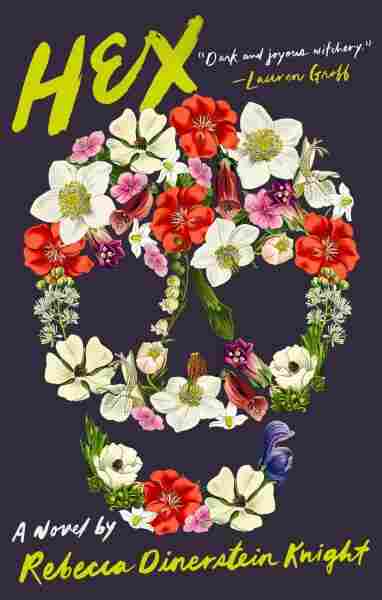 Rebecca Dinerstein Knight's strange and delightful second novel, Hex, opens with its protagonist in crisis. Nell Barber is an ex-doctoral student at Columbia; her lab, which studied toxins, has been disbanded after a student accidentally poisons herself, and now Nell is floating through New York, grief-stricken and in need of work. She's also profoundly lovesick for her dissertation advisor, a magnetic young botanist named Dr. Joan Kallas. Without Joan's "absolutely necessary nearness," Nell is undone. She describes herself as "deleted." She spends her time cooking up ways to continue her research without a lab; writing long letters to Joan in composition notebooks; and seeking beauty wherever she can find it.

The pursuit of beauty is central to Hex. It is Nell's greatest motivator. In the second of her Joan notebooks, she writes, "I first turned to botany like anybody because I found flowers terrifyingly attractive and had been raised by reasonable people who didn't put beauty at the center of their lives. I thought I could put it there." But studying flowers, it turns out, isn't enough. Nell needs the "useless beauty" of her unrequited love for Joan, which is total: intellectual, romantic, sexual, and somehow moral. Also, crucially, it is not frightening. Nell's love may be a bit obsessive, but it never threatens to cross the line into stalking or harm. Mostly, it drives her to write love letters and attempt scientific feats — both great ways to compete with Joan's husband, a rich, dim sleazeball named Barry. But for much of the novel, Nell has no idea her behavior is romantically strategic. She knows only that she's "[f]rantic [with love], and disgusted with myself and my humdrum studies and my whole pasty anemic priceless life."

'Rest And Relaxation' Is As Sharp As Its Heroine Is Bleary

'The New Me' Is Meh About Ambition And Adulthood

The pleasure of reading Hex comes largely from Nell's insistent belief that her life is priceless. Even at her lowest, she never doubts that she deserves beauty and joy, if she can find them. This is unusual in contemporary fiction. The past half-decade has seen a spike in oddball novels about brainy women in various states of crisis; think of Ottessa Moshfegh's My Year of Rest and Relaxation, or Halle Butler's The New Me, or Danzy Senna's New People. These three novels succeed, in part, because their prose and protagonists are leached of joy. Dinerstein Knight inverts that strategy. She shoves joy at Nell, and makes Nell greedy for it. She gives Nell two immensely joyful sidekicks: her larger-than-life friend Mishti and her spaced-out medievalist ex-boyfriend Tom. (Both are gorgeous, which would be irritating were it not so coherent with Nell's desire to center beauty in her life.) Most importantly, she lets Nell find joy in even unrequited love.

The pleasure of reading 'Hex' comes largely from Nell's insistent belief that her life is priceless. Even at her lowest, she never doubts that she deserves beauty and joy, if she can find them.

Nell's devotion to aesthetic and poetic pleasure is also unusual in contemporary fiction — or, at least, in fictional portrayals of people who are not artists. Often, writers seem to lapse into the belief that beauty is ours to pursue. Dinerstein Knight does not make this mistake. Nell enters science in search of beauty; she likes researching toxins and antidotes because she appreciates the poetry of "a poison that accepts its own opposite;" and, like a speculative-fiction writer or a Greek philosopher, she dreams not of eradicating pain, but of creating a world in which we can all "suffer and heal whenever, whenever we need to." She may be scientific, but she is far from practical.

In another writer's hands, Nell might seem loopy, or like a manic pixie. Dinerstein Knight occasionally skates close to the latter edge. What saves her is her prose style, which oscillates between abstract, conversational, and straight-up weird. Take an early moment of Nell noticing her own body: she doesn't think about her weight, or face, or sexuality, but about "my skeleton's original fact." What does that mean? Who knows. But the phrase's strangeness feels specific to Nell. It grounds the novel in her odd perspective, which proves very fun to inhabit.

Nell's love of Joan is contagious. So is her love of lab work. Both are such clear sources of delight for Nell that it is impossible, as a reader, not to root for her to get back to science — and, of course, back to Joan. More to the point, it is impossible not to hope Joan and Nell will get together. Dinerstein Knight offers no reason to believe in Joan's marriage. Barry is transparently terrible. Nell is adorable. In one letter to Joan, she pours out her longing for "your agreement, your affirmation, your success that could illuminate and create my own — [and also] your waist, some way of cupping the sides of your waist with my wrinkly creased palms." It would be hard to find a less sexy combination of words than wrinkly creased palms, and yet Dinerstein Knight gets the moment to land; Nell imbues even shriveled hands with longing. How could a reader — or a botany professor — not be charmed?