Accessibility links
Interview: Thundercat On 'It Is What It Is,' Mac Miller's Tiny Desk And Loss The collaboration-loving bassist said "It's hard to see clearly through the pain of losing him," when asked about the death of close friend Mac Miller. That loss permeates his fourth studio album. 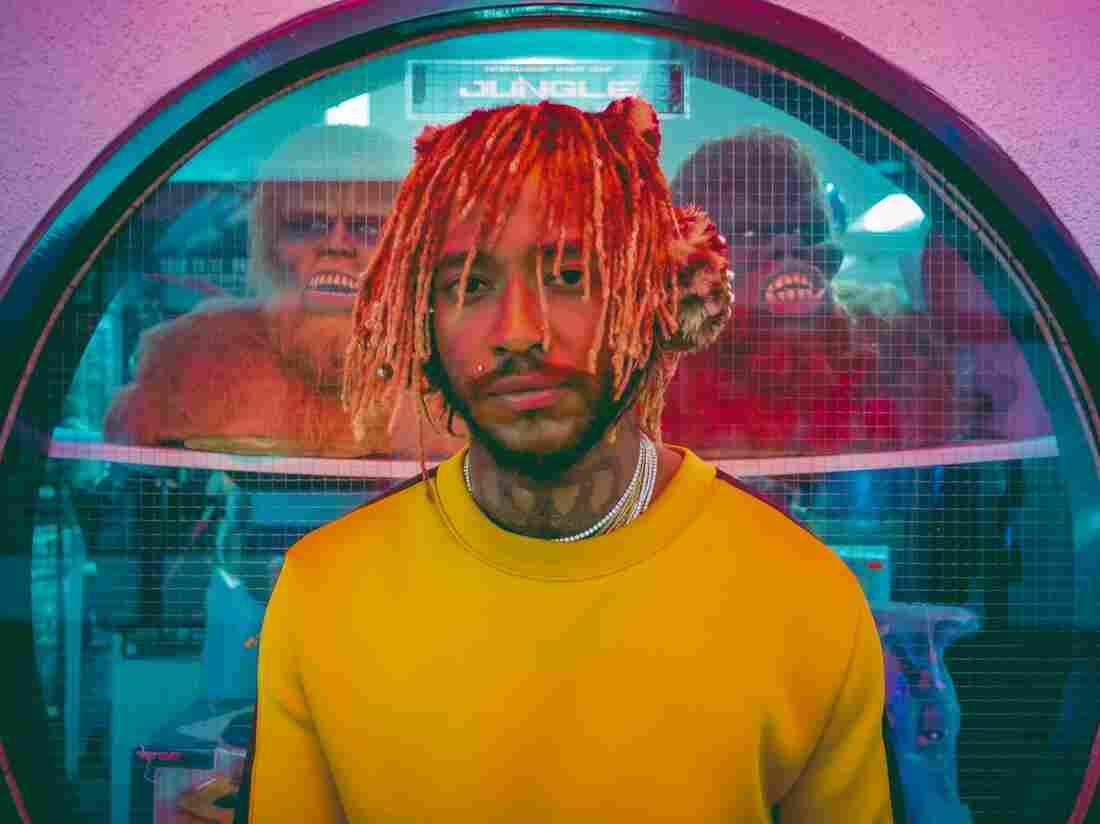 Thundercat's new album It Is What It Is is full of references to his late friend Mac Miller. The1point8 / Carlos G./Courtesy of the artist hide caption 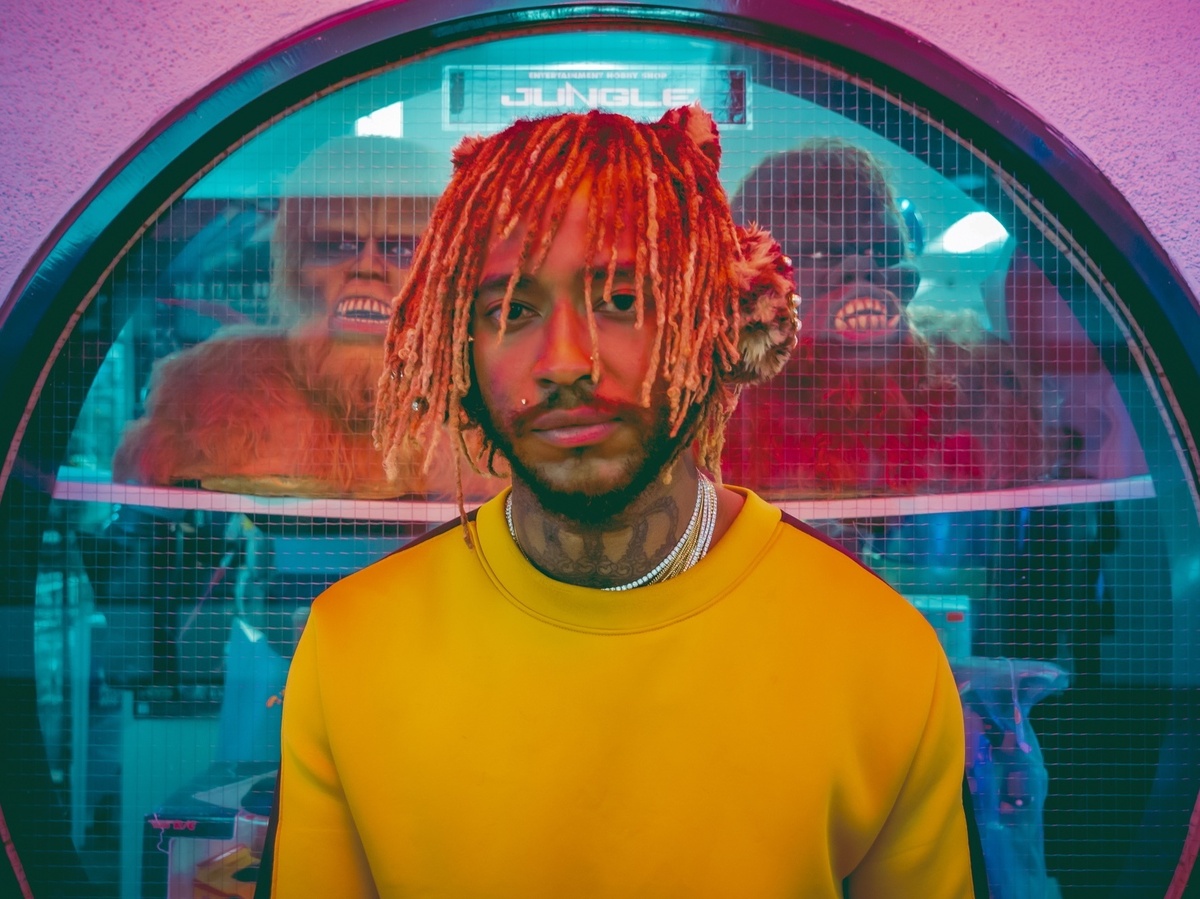 Thundercat's new album It Is What It Is is full of references to his late friend Mac Miller.

Stephen Bruner, better known as Thundercat, is one of the music industry's most eclectic and prolific collaborators. Over the past five years, the virtuosic bass player has worked with everyone from Snoop Dogg and Kendrick Lamar to Michael McDonald. His latest album, It Is What It Is, was released on Friday and it features the same expansive range of genres and styles.

With appearances from Childish Gambino, Kamasi Washington and Lil B, It Is What Is hops from jazz to funk to R&B, full of Thundercat's signature dizzyingly-fast bass runs and sense of humor. The album also has plenty of somber moments, like when he reflects on the passing of his late friend Mac Miller.

"It's hard to see clearly through the pain of losing him," he says.

NPR's Michel Martin spoke to Thundercat about the influence of Mac Miller, including the story behind his cameo the Tiny Desk concert recorded shortly before Miller's death, and the importance of learning to sit and do nothing. Listen to the radio version in the audio link above and read on for a transcript of the interview.

Michel Martin: First of all, how are you doing right now, under self-quarantine?

Our Daily Breather: Thundercat On Anime

Thundercat: I'm chilling. I feel like I was already a homebody, kind of self-quarantining kind of person on a regular basis, anyways. So it doesn't feel like far-fetched or anything. It feels very close to what I would be doing on my own anyway.

No [laughs]. I have a ton of things I miss, for sure. I miss being with Lotus and working a bit. But it's all good. It hasn't gone anywhere. Over the course of the last year, because of all of the things that actually have changed in my life, I've gotten better at just sitting still. I always talk about this saying that me and Mac Miller used to have: "Sit down and let things happen." And we would laugh about it, but it's something to learn: to be able to just sit down and do nothing. I think everybody is learning this right now.

The rapper Mac Miller, who died in 2018, was a very close friend of yours. There are a number of references to him and the closeness you shared throughout the album. What influence do you think he had on this album?

I mean, it's hard to see clearly through the pain of losing him. I think Mac's spirit always was very influential, ever since I met him, in my attitude about recording; just the way I would go about recording sometimes, I knew it's something I had learned working with Mac. But it's kind of hard to see clearly with that. I mean, even on the album, I'm kind of saying goodbye to him a bit.

You shared on Twitter a story about when you joined Mac Miller for his Tiny Desk concert. Can you tell us about that moment?

Yeah, I totally remember that moment. For lack of a better explanation, Mac was always in some kind of way about what he was doing. He really wanted it to be magical every time he would do something. This moment was really funny because I was on tour in Europe, and I was going between different countries, going in and out of cell phone service, and Mac was really like "I really want you to be there." I'm like "It's going to be fine, man. There's no reason to have me there. Just do your thing." But he's like "No, I really want you to be there. I really want you to be there." And I was like "It's very difficult, Mac, I'm in the middle of a tour. I can't just cancel a couple of shows and come out there and do it." And lo and behold, I cancelled a couple of shows to come out there and do it. I could see that he wanted it to be something. He wanted to feel comfortable in front of everybody. He wanted to introduce people to how it works for him. I think he wanted me to be there beside him.

And he didn't think I was going to show up. Flaking is a major part of being a musician. I'm not a flake, but we just, as musicians, that accumulates as a reputation. And so Mac probably didn't believe that I was going to show up, because I'm coming from some part of Eastern Europe or something. And I showed up! And when he turned around and I was like "Thank you," and he was kind of laughing, it was one of those moments like "No way, you're really here!" He's like "Did you really just come out here?" And I was like "Yeah, man." We talked about it and it was like, I would do it for him. I would do that for Mac.

One of the things I like about your music is you don't shy away from things that are hard. Losing Mac Miller, your friend, he isn't your only friend you have lost too soon, and I'm wondering to be a young man and to have lost people, that's hard and I do wonder what you think about that. Has that become central to your art? What do you think about that?

That's where the name of the album comes from. "It is what it is," is like this is reality; this is what we live in; this is the existence; this is the existential dread, that feeling of "I don't know what's going to happen" and impending doom. It's been realized on many different levels. I'm happy that I can still laugh through a lot of it, but at the same time it's just the reality. We're all going to die at some point. And it always just seems like it's not going to happen to you. When you get older you start to say things like "These kids think they're invincible" and stuff like that — and you kind of do. You kind of do, because you're going along about your business and you think you're going to be seeing your friends when you're old. You're even assuming you're going to make it to be old. This moment for me has become the acceptance of that, and trying to keep my head through it. "Life comes at you quickly" is the one thing that I can think of right now. But even though it comes at you quick, you can still be okay.

With a new album to share normally you'd either be planning a tour or touring right now. How are you planning to share this work with people now that things are so different? Do you think that people will just find it and who needs to hear it?

I definitely think that people will have a chance to connect with it in any way. Music for me is what I do; everything else is a plus. Playing live for me is a major aspect of it, but being adaptable and being open to change and stuff like that — I don't know. Like the movie Ready Player One, we're kind of living in that a little bit. There's a part of it where I'm very adaptable with this stuff. ... I always see stuff and I go "It's not really a race." It's not something that I have to be afraid of or feel like I have to [contribute]. Or you do contribute when you feel [like it] but the truth is you feel it out.

I don't know what comes next. The act of being together and playing live is such a specific thing. I think that this will make those moments even more special when everybody gets a chance to do it, because we realize that it could be taken away from us at any given time. But there's nothing that makes up for it, in my mind, actually being able to play live and go on tour and make music with friends.

Do you have any words of comfort for artists who are feeling defeated right now?

I'll say it like Erykah Badu told me: This isn't a race. Take your time. Stay out of your mind, because a lot of the place that exists is in your mind, where you have these problems. "What if" and "If I don't get a chance to" and "What if I don't get to see." And the truth is it's all in your mind. So get out of your mind and come out here with everybody else and just be here. And I guess I would say just don't be afraid [even if] everything is lending itself to being afraid. Just keep creating fearlessly.

NPR's Michael Radcliffe and Tinbete Ermyas produced and edited the audio of this interview. Cyrena Touros and editorial intern Jon Lewis adapted it for the Web.