Accessibility links
Coronavirus Trump Fact Checks And Questions Answered There are lots of questions about the novel coronavirus that we try to answer, including whether we should wear masks, if the U.S. is testing enough and if there's a drug that can treat COVID-19.

Setting The Record Straight In Another Week Of Trump And Coronavirus

Setting The Record Straight In Another Week Of Trump And Coronavirus 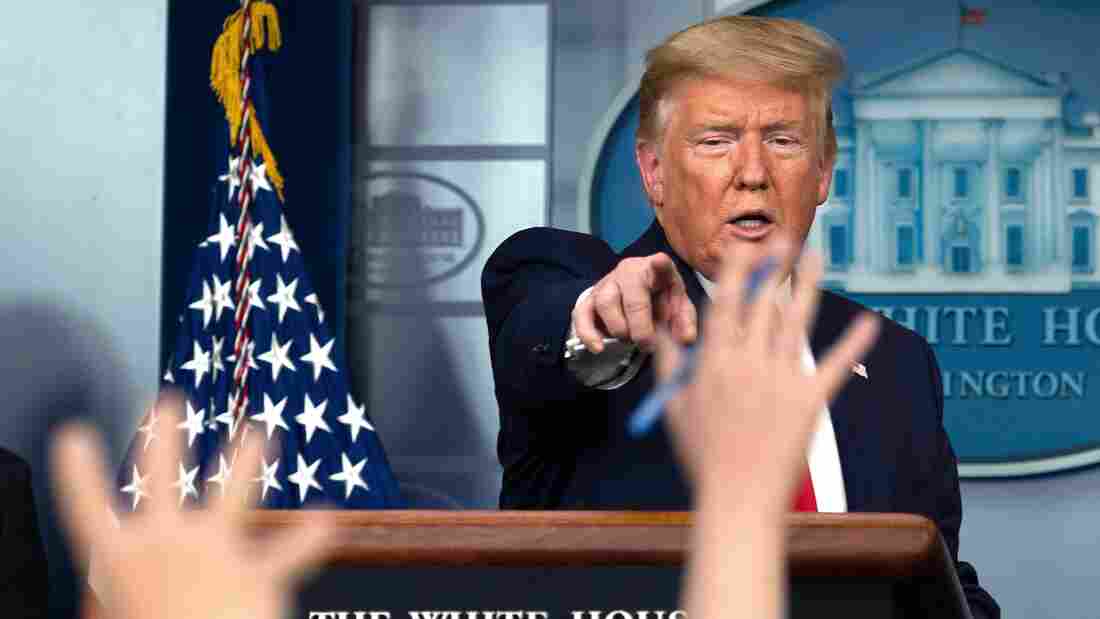 President Trump speaks during the daily briefing on the novel coronavirus this week. Jim Watson/AFP via Getty Images hide caption 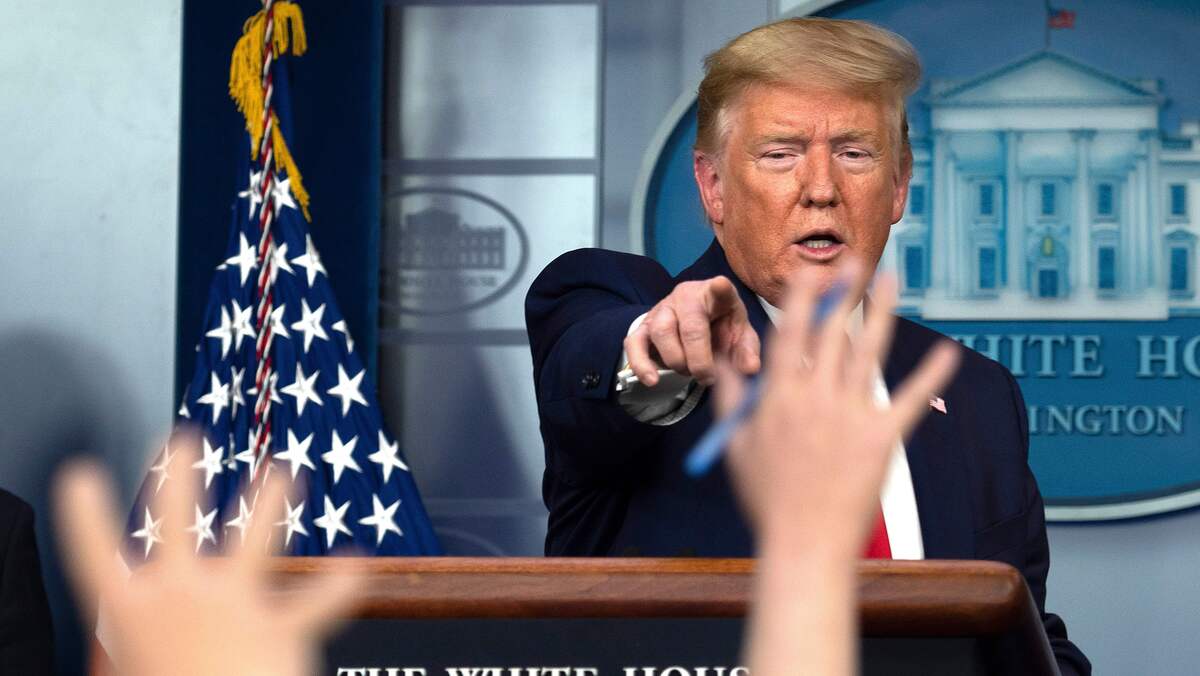 President Trump speaks during the daily briefing on the novel coronavirus this week.

Easter is next Sunday, April 12. But the country isn't close to being "opened up" by then, as President Trump said he'd like to see during a March 24 news conference, a suggestion that was panned by experts.

Instead, the country has gone the opposite direction. Dr. Anthony Fauci of the National Institutes of Health and coronavirus task force coordinator Dr. Deborah Birx are warning that 100,000 Americans or more could die from COVID-19.

Hearing those numbers, Trump endorsed strict stay-at-home measures remain in place for at least another month. It was yet another stunning reversal from Trump, whose messaging at the helm of the government's response to the novel coronavirus pandemic has been like whiplash.

Mixed in with that inconsistency have been a host of claims and suggestions that have been exaggerated, misleading or lacking in full context.

Here are five fact checks and stories that set the record straight this week:

1. Should We All Be Wearing Masks In Public? Health Experts Revisit The Question

This has become the question a lot of Americans are asking. The government has changed its tune in its recommendations on this, saying first that it wasn't necessary, but now suggests that wearing face coverings might be advisable to slow the spread.

"I can tell you that the data and this issue of whether it's going to contribute [to prevention] is being aggressively reviewed as we speak," Robert Redfield, director of the Centers for Disease Control and Prevention, told NPR on Monday.

Trump this week encouraged people to wear scarves. So what's the deal? On the one hand, wearing a mask in public may help "tamp down the risk presented by people who may be infected but aren't yet showing symptoms," as NPR's Huo Jingnan, Allison Aubrey and Carmel Wroth reported.

But on the other: "There's no definitive evidence from published research that wearing masks in public will protect the person wearing the mask from contracting diseases."

What's more, while one expert said homemade masks, shawls and scarves "might well be a good idea," the protection is likely minimal and they won't matter much, if at all, if they're made incorrectly or handled wrong.

Importantly, N95 medical masks should go to front-line health care workers, and the supply of them overall is extremely limited.

2. Ventilators Are No Panacea For Critically Ill COVID-19 Patients

Governors across the country are fighting for resources from the federal government, especially for ventilators.

"We do not have enough ventilators. Period," New York Gov. Andrew Cuomo said Friday. "I am signing an executive order allowing the state to take ventilators and redistribute to hospitals in need."

But, for as important as ventilators are, NPR's Jon Hamilton reported this week: "Most coronavirus patients who end up on ventilators go on to die, according to several small studies from the U.S., China and Europe. And many of the patients who continue to live can't be taken off the mechanical breathing machines."

"The largest study so far to look at mortality among coronavirus patients on ventilators was done by the Intensive Care National Audit & Research Centre in London. It found that among 98 ventilated patients in the U.K., just 33 were discharged alive.

The fact is, as Hamilton reports: "Patients need a ventilator when their lungs can no longer deliver enough oxygen to keep the body going. And it's an extreme measure." That said: "Ventilators have been seen as critical to treating coronavirus patients because the devices are very successful when used to treat common forms of pneumonia."

3. FACT CHECK: Trump Claims U.S. Testing For Coronavirus Most Per Capita — It's Not

The United States has ramped up testing, but it still lags other countries, per capita. That didn't stop President Trump from boasting of the nation's testing.

"We're now conducting well over 100,000 coronavirus tests per day," Trump said. "It's over 100,000 tests a day. And these are accurate tests, and they're moving rapidly, which is more than any other country in the world, both in terms of the raw number and also on a per-capita basis, the most."

If there's one topic that Democrats have debated in their primaries since 2007 — and certainly heavily in 2019 and 2020 — it's health care.

Specifically, Democrats have burrowed in on how to make health insurance affordable for those who don't qualify for Medicaid and don't have an employer-based insurance plan.

It was almost entirely what the Affordable Care Act was trying to address.

Yet, when asked what the federal government planned to do about that gap as some of those people try to get coronavirus treatment, President Trump did not say he would reopen Obamacare exchanges.

Instead, he said this: "They're talking about it in the 2020 election too and nobody's gotten to it. Nobody's talked about it at all. I think we're going to get to it. I don't think the other group will get to it. They haven't even spoken about it."

Everyone wants a cure, a treatment to the novel coronavirus. But there is no treatment that's proven to work yet and a vaccine is still a year to a year and a half off.

That hasn't stopped President Trump from touting the possibilities of hydroxychloroquine, a drug used to treat lupus and to prevent malaria that, NPR's Dan Charles reports, medical experts have warned against buying for the purpose of treating COVID-19, because it might exhaust supplies for people who actually need it.

"It's looking like it's having some good results," Trump said Friday. "I hope that, that would be a phenomenal thing."

Charles reports that lab studies showed hydroxychloroquine "blocked the coronavirus from entering cells," but "there's no solid evidence ... that the drug actually is an effective COVID-19 treatment."

And: "Clinical trials of hydroxychloroquine have just recently started, and the scientists in charge of them have not reported any results as yet." That could take weeks.