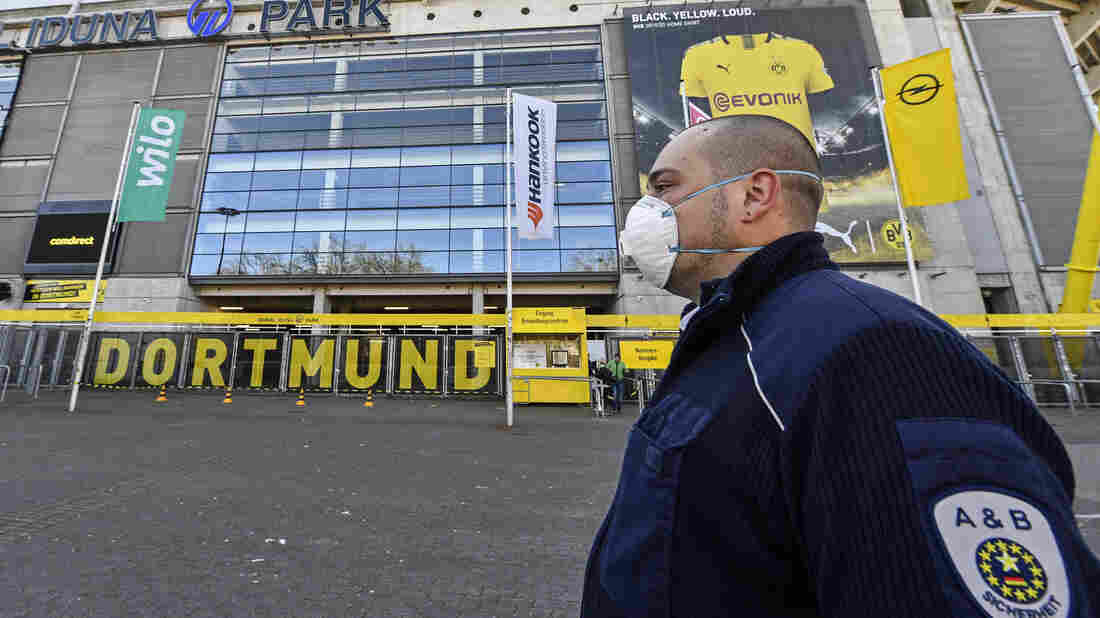 Security with face masks stand in front of the Signal Iduna Park, where a temporary coronavirus treatment center opened in Dortmund, Germany, Saturday. Germany has the fourth-most COVID-19 cases in the world and demand for medical supplies has skyrocketed. Martin Meissner/AP hide caption 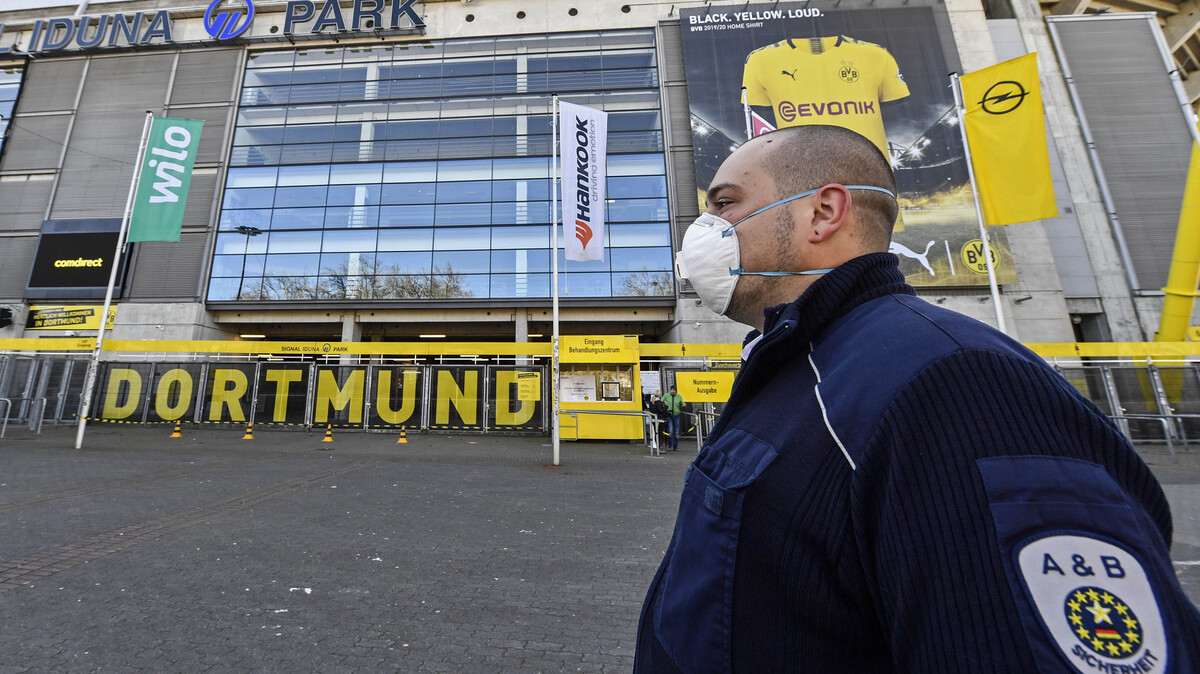 Security with face masks stand in front of the Signal Iduna Park, where a temporary coronavirus treatment center opened in Dortmund, Germany, Saturday. Germany has the fourth-most COVID-19 cases in the world and demand for medical supplies has skyrocketed.

As the coronavirus rattles the globe, governments and aid organizations everywhere find themselves in a race to acquire scarce medical supplies and protective equipment — but some say the United States isn't playing fair.

Earlier this week, officials in both Germany and France accused the U.S. of diverting medical supplies meant for their respective countries by outbidding the original buyers.

As of Saturday, there were more than 1 million confirmed cases of COVID-19 worldwide and more than 60,000 deaths from the virus, according to a tally by researchers at Johns Hopkins University. The U.S. has the most cases globally, with Germany and France at the fourth and fifth-highest case count, respectively.

On Friday, officials in Berlin alleged that the U.S. intercepted a shipment of medical equipment in Thailand from American medical supply company 3M and diverted it to the U.S., the German newspaper Der Tagesspiegel reported. Berlin's interior minister called the alleged interception "modern piracy."

That same day, French officials accused the U.S. of redirecting a shipment of medical masks from Shanghai originally intended for a hard-hit French region to the U.S. by offering a much higher price for the supplies, The Guardian reported.

The accusations come as demand in the U.S. for facemasks surges, particularly after a new Centers for Disease Control and Prevention recommendation that all Americans should wear cloth face coverings in public.

The U.S. has flatly denied allegations of diverting supplies from other countries. But President Trump has also tried to force American companies into prioritizing U.S. orders by invoking the Defense Production Act. On Thursday, the president used the DPA to order 3M to stop exporting hospital-grade N95 masks to Canada and Latin America, according to the company.

"We hit 3M hard today after seeing what they were doing with their Masks. 'P Act' all the way," the president said in a tweet Thursday night.

On Friday morning, 3M warned of "significant humanitarian implications" of ending shipments to Canada and Latin America, saying the company is "a critical supplier of respirators." 3M also said other countries would likely retaliate, reducing the overall number of respirators in the U.S.

"It would be a mistake to create blockages or reduce the amount of back-and-forth trade of essential goods and services including medical goods," the Canadian leader said.

3M CEO Mike Roman also pushed back on the president's threats to the company. "The idea that 3M is not doing all it can to fight price gouging and unauthorized retailing is absurd," Roman said in a CNBC interview. "The narrative that we are not doing everything we can to maximize deliveries of respirators in our home country — nothing could be further from the truth."

With no collective global effort to distribute supplies to countries that need them most, little stands in the way of global feuding and price-gouging. The Trump administration has come under criticism for the same issue in domestic markets.

The Washington Post reported earlier this week that states with governors who are allies to the president, including Florida's Ron DeSantis, have had little trouble getting requests filled with supplies from the national stockpile. Meanwhile, some Democratic governors have struggled to get federal help.

Illinois Gov. J.B. Pritzker and New York Gov. Andrew Cuomo have repeatedly complained that trying to get federal supplies is like the "wild west": states must compete against one another as well as other countries, with essential supplies going to the highest bidder.

Trump blamed New York's shortage of ventilators on the state itself for not having more respirators before the pandemic broke out.

"They should've had more ventilators. They were totally under-serviced," the president said Friday. "We have a lot of states that have to be taken care of, some much more than others."

New York state has the highest number of coronavirus cases and deaths in the country, with more than 100,000 cases of COVID-19 as of Saturday. The next closest state is New Jersey with just under 30,000 cases.