Accessibility links
Little Demons, Death And Biting Dogs: How We Picture Disease Today's cartoonists are depicting the novel coronavirus as an angry, spiky ball — reflecting our knowledge of viruses. But before we knew what they looked like, we imagined disease differently.

Little Demons, Death And Biting Dogs: How We Picture Disease

Little Demons, Death And Biting Dogs: How We Picture Disease 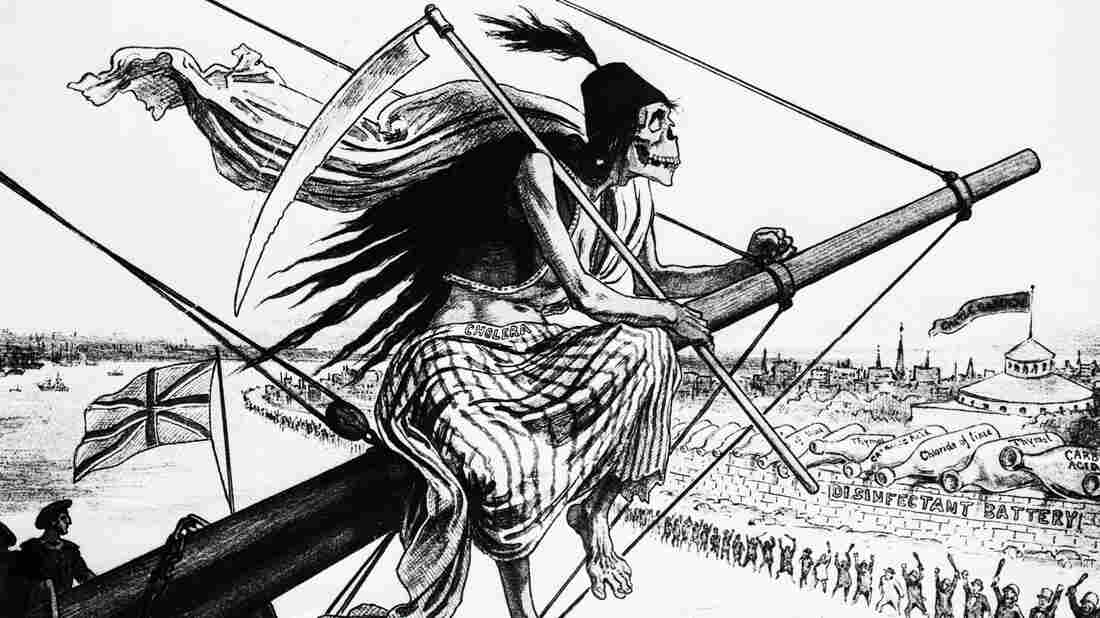 An 1883 illustration of the Grim Reaper draped in a cloth labeled "cholera," arriving in America on a British ship. Bettmann Archive/Getty Images hide caption 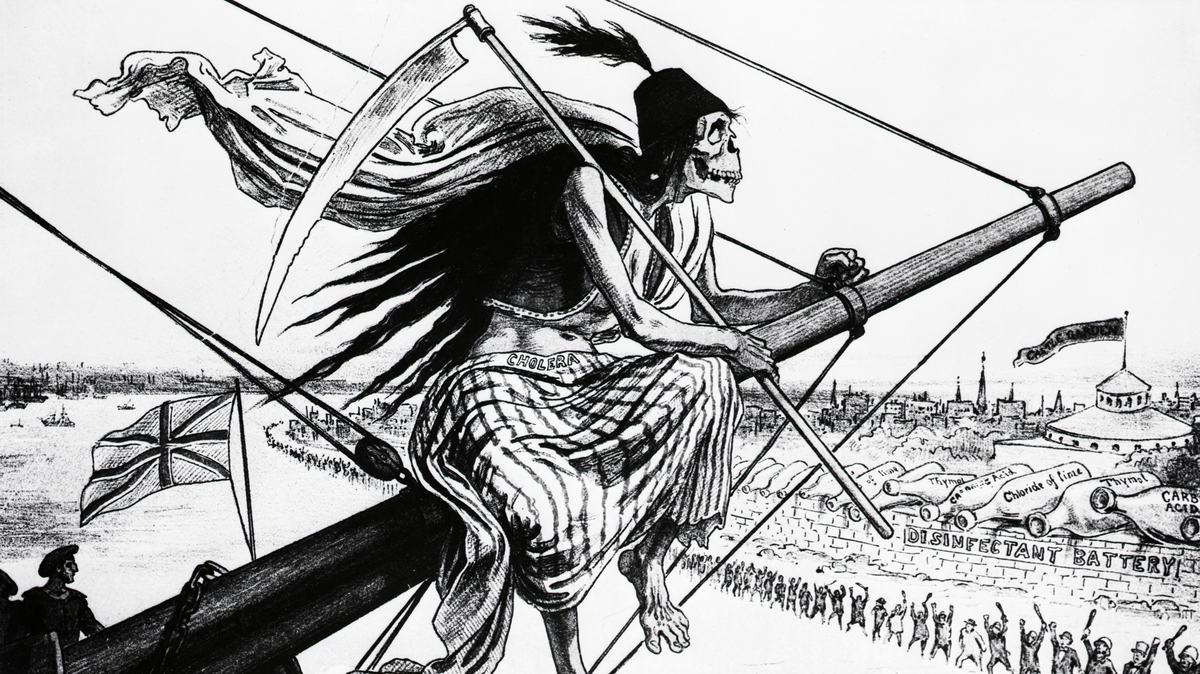 An 1883 illustration of the Grim Reaper draped in a cloth labeled "cholera," arriving in America on a British ship.

Picture an angry little ball, covered in spikes, perhaps equipped with arms and legs, and definitely an evil grin. That's how cartoonists and animators are anthropomorphizing Covid-19. Which seems to make the coronavirus unique in our long history of anthropomorphizing diseases.

"What's been remarkable about Covid-19 is from the beginning, we had a visual of the pathogen," says MK Czerwiec, a nurse, artist and scholar of cartoons and health. That means, she says, that cartoons of the virus are somewhat accurate, at least compared to the ways we pictured diseases in the past.

A lot of the early anthropomorphizations are less about disease and more about pain. Like little dogs biting our feet for gout, for example.

Back when we first started imagining disease visually, people didn't even really know what disease was. It was invisible, supernatural, terrifying. So they used representations of illness and death that made sense at the time, such as the Grim Reaper.

"Little figures of demons that were physically attacking the body," offers Jared Gardner. He's a professor of popular culture at the Ohio State University with an interest in medical humanities and cartoons. He curated a recent exhibition on the topic called Drawing Blood. "A lot of the early anthropomorphizations are less about disease and more about pain," he explains. "Like little dogs biting our feet for gout, for example."

Even after germ theory began to change our understanding of what diseases literally looked like, Gardner says, illness and epidemics were often represented through depictions of the people who were most vulnerable to it.

"A poor child," he says, pointing to a Victorian-era cartoon from the British magazine Punch. "Because of course the poor were often the predominant victims. Many of these diseases — especially cholera, which circulated through the public pumps in housing tenements in London — had devastating effects on the poor and therefore, the victims became scapegoated as the source of the disease." 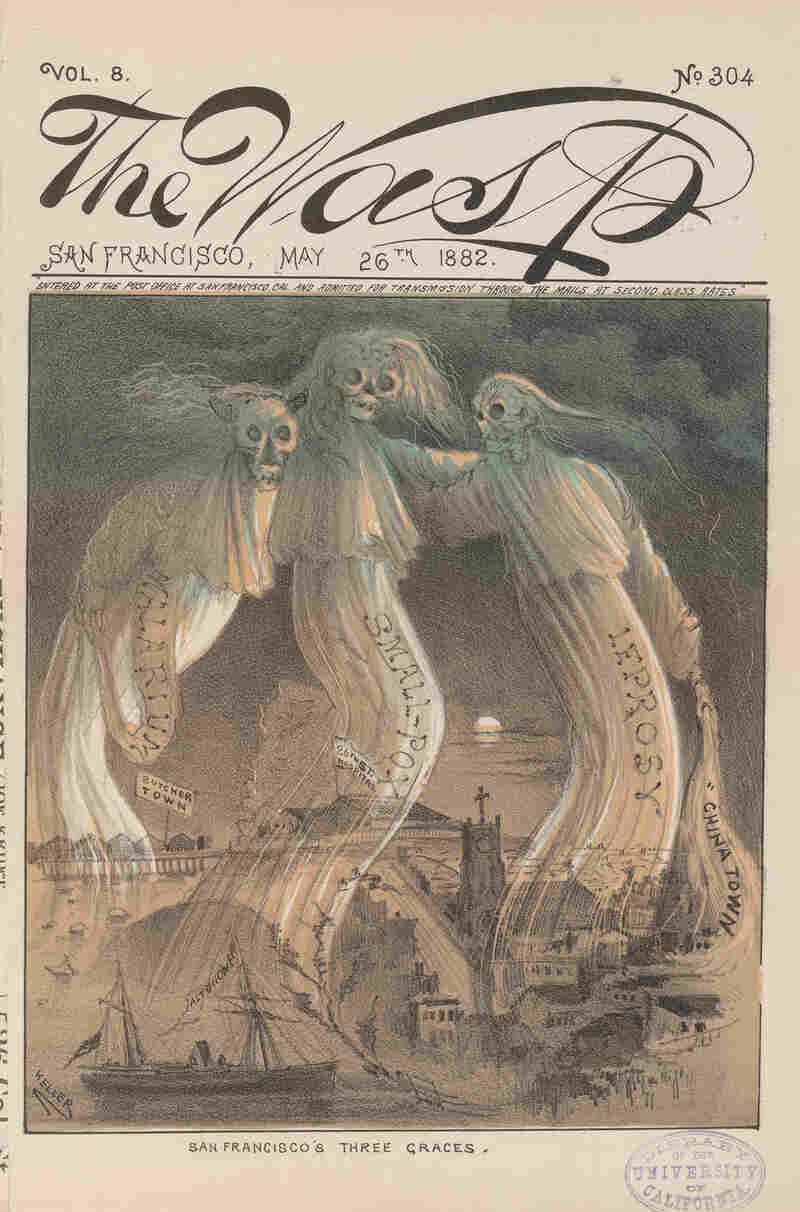 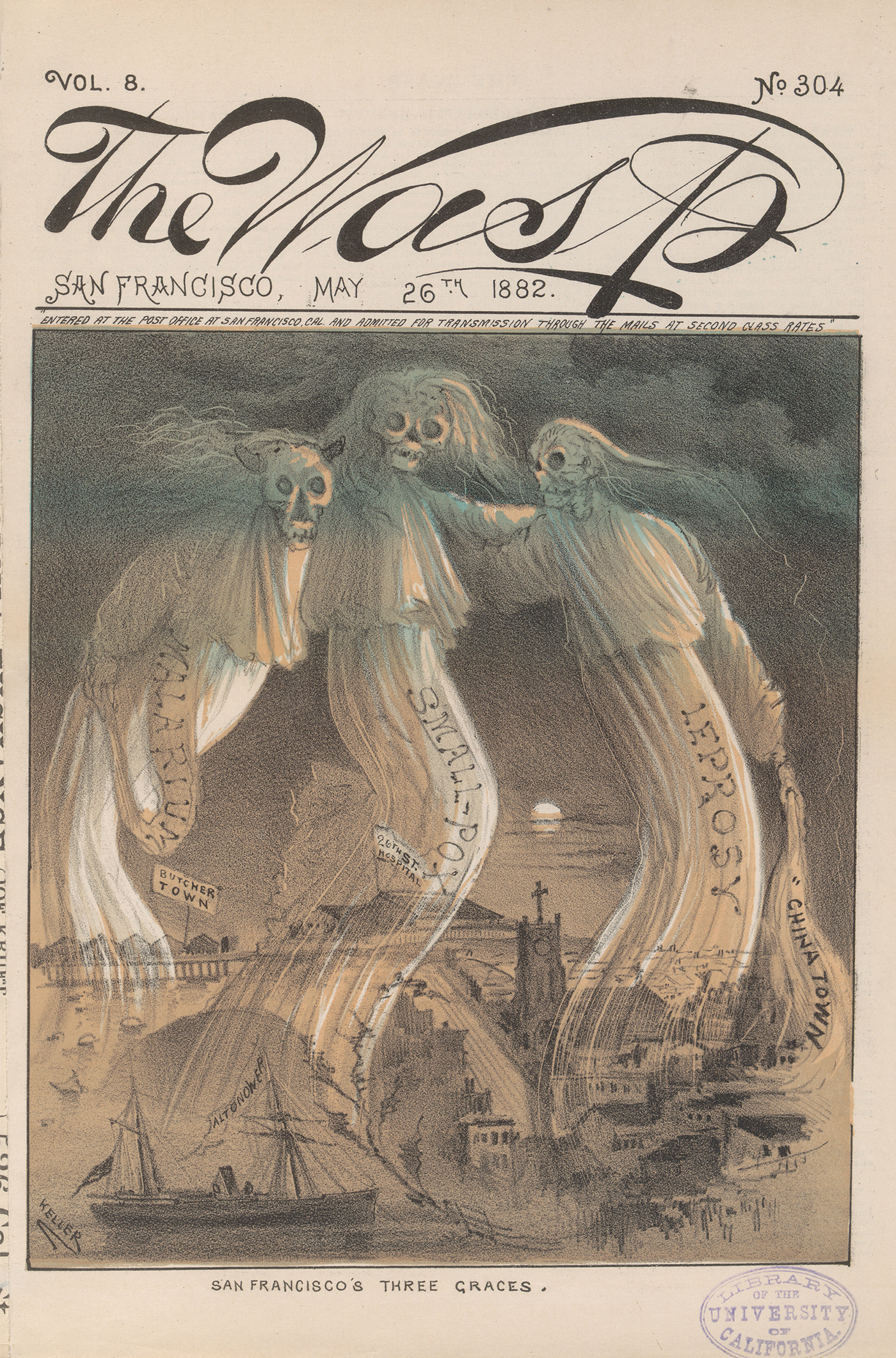 Then, there's all the racism. So much racism. "Racism and xenophobia are deep in the genome of comics and cartooning," Gardner acknowledges. For example, during the great flu pandemic of 1918, he says, people wrongly thought the disease was spread by mosquitoes, and that's reflected in the era's cartoons — with an ugly xenophobic twist. "You'll often have a mosquito dressed up in a kind of toreador's cape, with what the cartoonist is imagining as a Spanish hat," Gardner says, with an audible grimace. "Usually, in the racist imaginary of the times, some sort of Mexican sombrero."

It's a challenge for contemporary cartoonists to work against conventions so deeply embedded in the medium, and at the beginning of the current coronavirus pandemic, Gardner says he observed even mainstream political cartoonists using offensive stereotypes in their comics about the virus' first outbreak in China. He saw freighted images, such as the octopus, standing in for China — which, he says, was also used by Nazi cartoonists to represent Jews back in the 1920s and '30s. "It's often represented as a figure for an insidious foreign invader working its way into every element of society," Gardner says.

However, he suggests that these days contemporary cartoonists who work for established media outlets are doing a better job. "They're backing away from that kind of imagery. The initial xenophobia you saw in some mainstream cartooning has disappeared."

As far as actual science goes, visualizing coronavirus in cartoons and animation has improved too. MK Czerwiec's interest in health and cartoons began during the AIDS crises of the 1980s, when she started looking at how artists anthropomorphized the epidemic. "HIV, early on, before we knew what the virus itself actually looked like, was more of a traditional monster shape," she observes. In a 1989 HIV coloring book for kids, distributed by the Brooklyn AIDS Task Force, the disease was presented as a malignant green beast with claws and a tail — and in a detail not unlike today's coronavirus cartoons—spikes on its grimacing head.

Those distinctive coronavirus spikes evoke for some the demonic character Pinhead from the Hellraiser horror franchise – recalling those early images of disease as devils. A satirical Egyptian news show even "interviewed" the coronavirus, played by an actor wearing a Pinhead mask.

But Czerwiec points to how the virus was anthropomorphized on the Stephen Colbert's animated political commentary series, "Tooning Out the News," as a bouncy green ball with expressive eyebrows and a bratty smirk. "I was surprised by how endearing the character was," Czerwiec says. Which might seem counterintuitive, she added, but there's a logic to picturing coronavirus as cute. "You want to make it look like a threat, but not too scary."

That's especially crucial when it comes to messages about public safety, she adds. And that surprising cuteness also suggests that — hopefully — the spread of the corona virus can be corralled and controlled.