Accessibility links
Pandemic Forces Congress To Take A Recess Like None Other Congress left for an extended recess as a result of the coronavirus outbreak and may not return for several weeks. Lawmakers say their days have turned into a blur of conference calls and video chats. 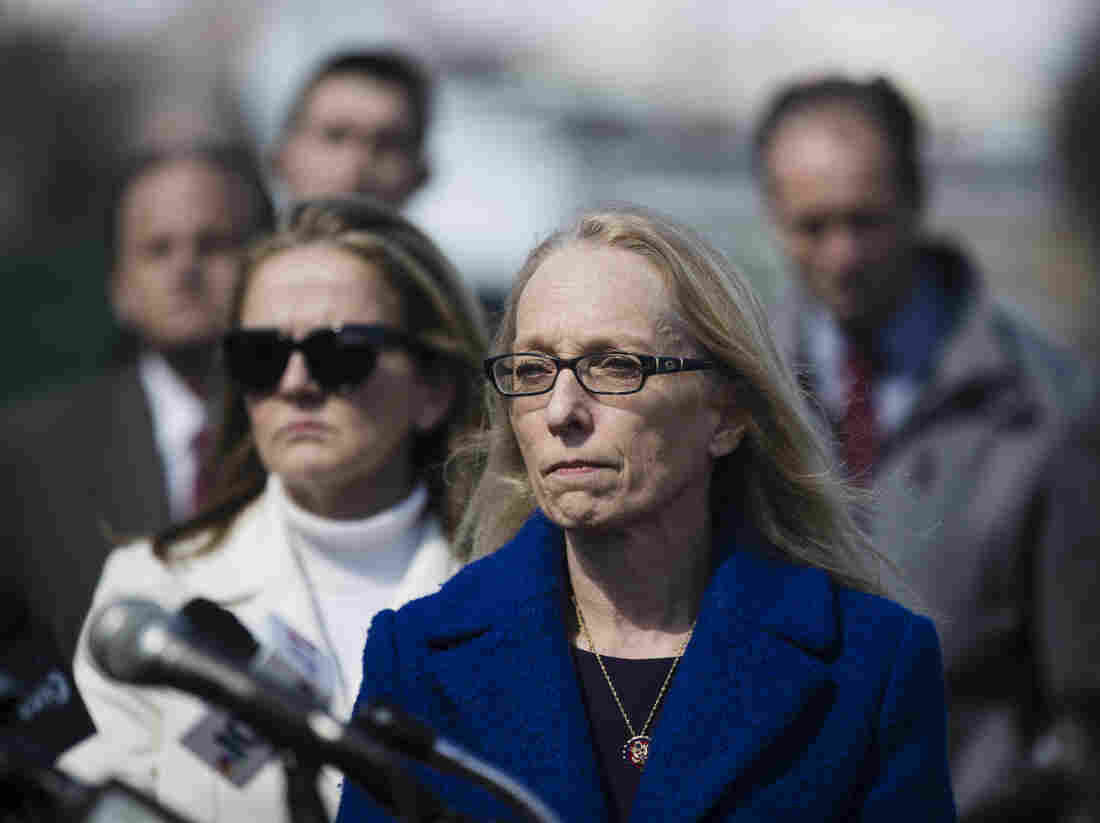 Rep. Mary Gay Scanlon, D-Pa., at a news conference in Philadelphia in 2019. Now that lawmakers have left for an extended recess amid the coronavirus pandemic, Scanlon hosted a kid's town hall over the phone. Matt Rourke/AP hide caption 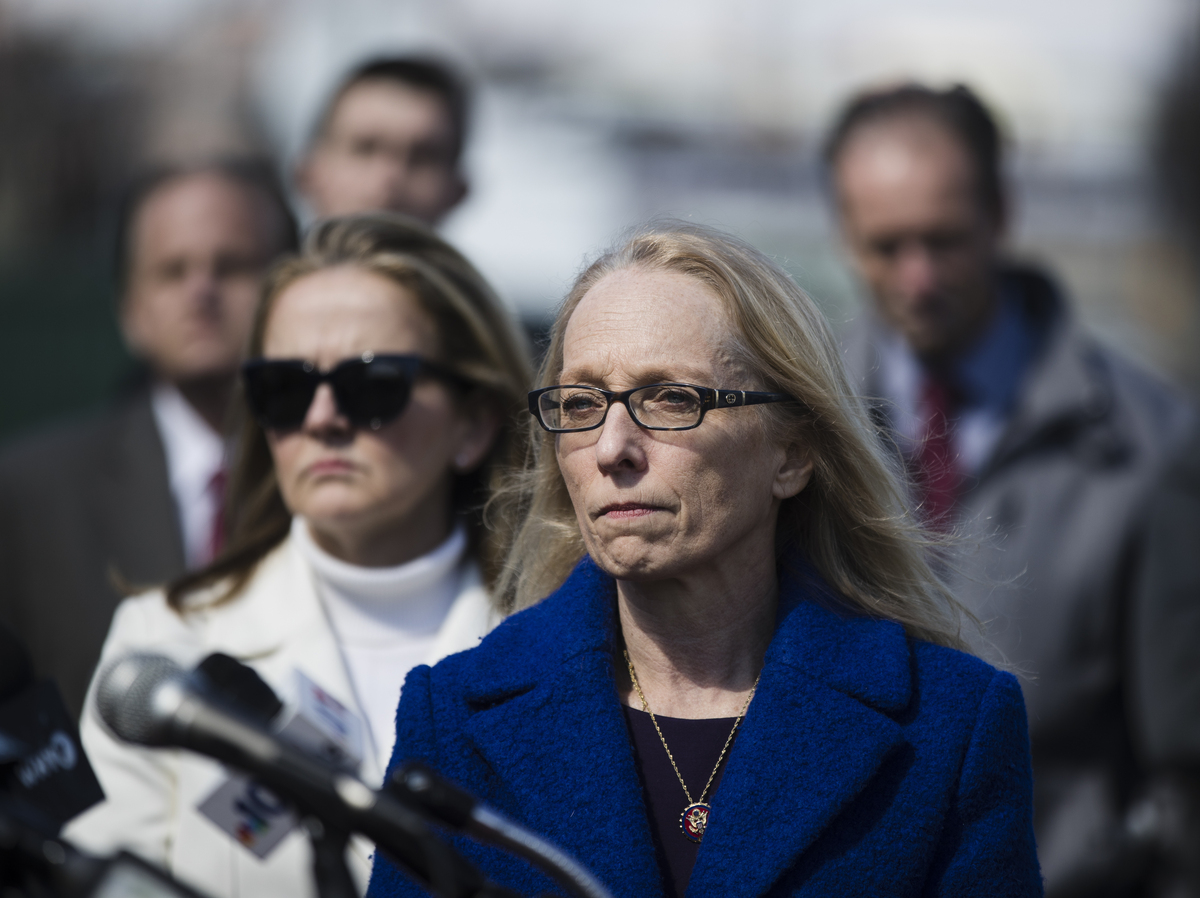 Rep. Mary Gay Scanlon, D-Pa., at a news conference in Philadelphia in 2019. Now that lawmakers have left for an extended recess amid the coronavirus pandemic, Scanlon hosted a kid's town hall over the phone.

The children's voices on the phone line were hesitant, but they were looking for answers.

"Why did we switch to remote learning?"

"When are we going to go back to school?"

"They're opening up an emergency hospital here, will that bring more coronavirus cases to my area?"

Those were some of the questions heard during a different kind of constituent event: a kid's congressional town hall by telephone. Pennsylvania Democratic Rep. Mary Gay Scanlon recently hosted the event in an effort to try something new.

"It's kind of a nice bright spot for us, and the kids who called in," Scanlon said.

Congress is on a recess like none other. Lawmakers left for an extended recess last week, and won't return until April 20 or later as a result of the spreading coronavirus pandemic. And many are adhering to stay-at-home orders in their districts.

The Coronavirus Small Business Loan Program: What You Need To Know

Just before they left, lawmakers approved a historic $2.2 trillion coronavirus response bill. Now, they're inundated with constituent questions about the how the legislation could help them.

This, as they work with state and local officials on shortages facing the health care industry in their regions and launch new legislative initiatives. And all mainly from home.

"Quite honestly, this is the least recess I've ever seen, even if you would call it a recess," said Republican Rep. Scott Perry.

Perry says he's seen a spike in interest from his Pennsylvania district.

Recently, he hosted a call for residents this week with a therapist. The event drew thousands of participants.

"On almost every single one of these calls we've been at max capacity and people still are seeking more information," he said. "As we go on and as our lives change, it requires a different kind of response."

Congress' job has only grown more critical with the crisis. Last month, it approved three coronavirus response bills. And Democrats, led by House Speaker Nancy Pelosi, are already pushing for a fourth package to address growing woes facing families, the economy and the health care industry.

But this kind of legislating has its limits. Lawmakers still can't vote remotely and congressional leaders have shown little appetite to install such a move anytime soon. So efforts to approve new legislation will likely require lawmakers to return to Capitol Hill to vote.

Until then, they'll have to come up with new ideas to stay connected. Many say they are certain they will.

"We'll continue to find creative ways to do the business of the Congress, to speak truth to power, to hold the administration accountable and most importantly, to get things done on behalf of the American people," said New York Democratic Rep. Hakeem Jeffries.

Jeffries made the comments during a press call with several colleagues through Zoom video conferencing. The call was focused on emerging concerns facing Asian Americans in the wake of racist attacks linked to coronavirus.

Perry suggests all the remote work efforts are part of an extreme adjustment to the world of legislating, and that's made phone lines new lifelines to their work.

"Where in the past, we would have a full day of meetings in the office, every 15 to 20 minutes there is another meeting," he said. "Of course now, you don't have that personal connection. It's happening on the phone."

Since Perry and his team have already hosted several calls since the coronavirus outbreak began, he wanted to try something different by hosting a therapist recently.

The hourlong event drew a slew of questions, including worried seniors who lost a job because of the pandemic.

"I have a wife that's on Social Security disability, if she gets this coronavirus, she will not make it ... so my question is, am I entitled to get any kind of unemployment?" one formerly self-employed worker asked the lawmakers.

He was assured he would.

Others asked if they would be eligible for cash payments under the new coronavirus relief bill and confusion on how to collect unemployment.

"Are retirees going to get any of this money?" one asked.

"Being a retiree will not keep you from collecting a check," Clyburn said.

The exchanges are the mark of a new normal for Congress, lawmakers say. And Scanlon argues it could impact the way Congress does its work in the future.

"It has been really amazing to see how much people are getting done without meeting face to face," Scanlon said. "I'm sure there will be lingering changes to how we do business after this."