Accessibility links
Quibi Shows: A Guide The streaming service "designed specifically for your phone" launches with 50 shows — and over 100 more on the way. Here are our highlights from the opening batch. 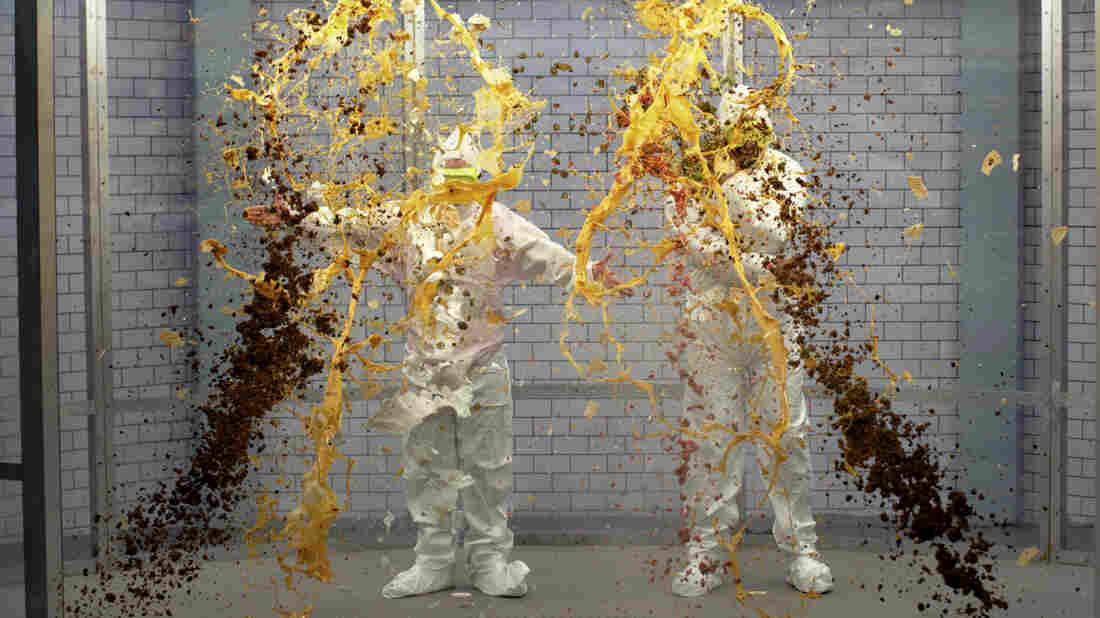 Two chefs get blasted in the face with a mystery entree on Dishmantled. I smell a Peabody! No, wait — marinara sauce. My mistake. Quibi hide caption 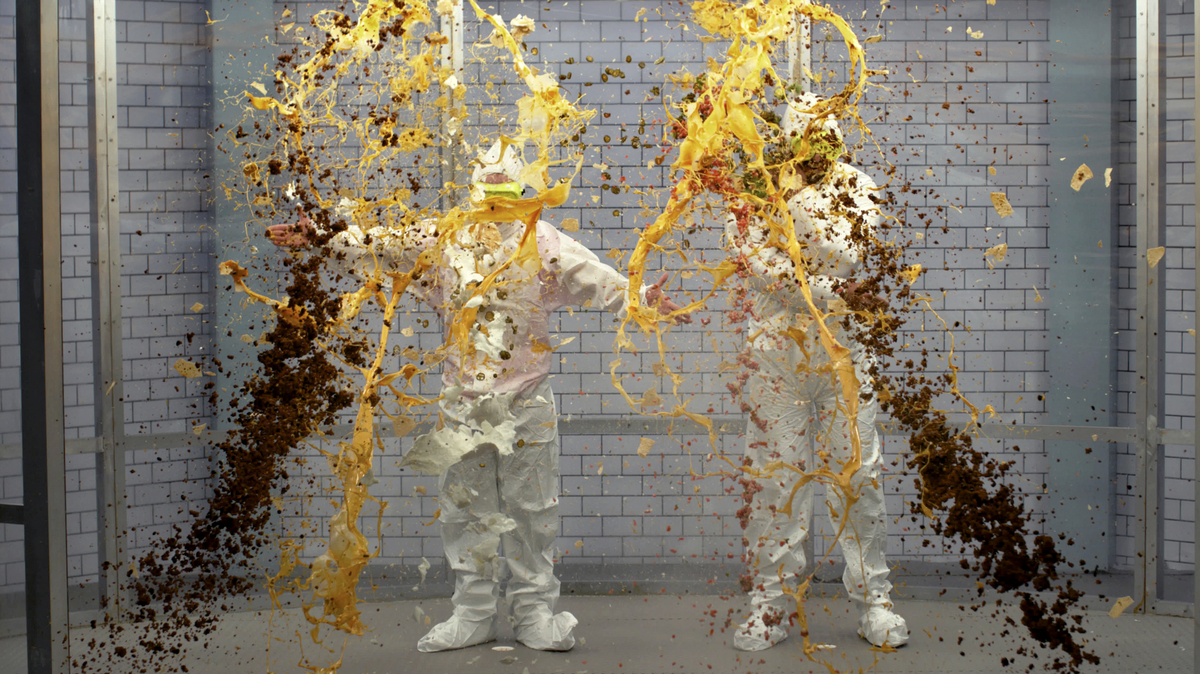 Two chefs get blasted in the face with a mystery entree on Dishmantled. I smell a Peabody! No, wait — marinara sauce. My mistake.

The streaming service Quibi — short for "quick bites" — calls itself "the first entertainment platform designed specifically for your phone."

Translation: They're doling out their shows in 7-to-10-minute chunks — er, episodes — at a rate of one per day. Quick bites, get it? Perfect for the busy, distracted, on-the-go consumer! Too bad none of us are on-the-going anywhere these days.

None of the "Daily Essentials" were available to screen before launch, but these will evidently focus on being topical — the latest in news, entertainment, fashion, etc. (Were we betting types, we'd say that Quibi's version of the podcast The Nod would be worth checking out.)

Quibi launches with 50 shows, and there's evidently 125 more on the way. After a free trial period, It'll cost you 4.99 a month with ads, and 7.99 a month without. This opening batch of shows is a decidedly mixed bag, but then, how could it not be?

Here are our picks from the shows that were screened for press.

I checked out the four Movies in Chapters that Quibi launched with, and while I can't Quibible (heh) with their production quality, I didn't love the experience of following a story in such a herky-jerky fashion. The issue, for me, was that the episodes didn't feel like satisfying, self-contained chapters — it just felt like I was watching a movie and kept getting interrupted. Also, pacing becomes a looming concern — in the show Survive, for example, the premise doesn't kick in until episode 4.

Of the four Movies in Chapters that Quibi launched with, I was most partial to Flipped, in which Will Forte and Kaitlin Olson play a couple of self-deluded jerks determined to become home-improvement television stars. It won't be to everyone's taste — Forte and Olson's characters are terrible people, and the show relishes demonstrating that — but I liked it well enough. (Arturo Castro shows up at the end of Episode 3, which bodes well.)

But for me, the shows that I most wanted to see more of fell into the Unscripted/Documentary category. Here they are.

Host Will Arnett makes fun of cheesy '80s pop culture ephemera. That's it, that's the show, and it's great. From the Super Bowl Shuffle and its unholy offspring to the fiasco that was the opening celebration for Toronto's SkyDome, to Gymkata, smart writing and Arnett's gravel-voiced delivery ... deliver.

Two straight men compete to be crowned "Honorarily Gay as F***" by a panel of queer and queer-adjacent judges. It shouldn't work — so why does it? Casting. Crucially, the contestants, judges and hosts all come from the New York/LA comedy scenes — the chemistry is friendly and funny, and the tone is spot on.

Two blindfolded chefs don bodysuits and get blasted in the face — seriously, there are cannons involved — with a mystery entree, which they must then taste, guess and re-create in 30 minutes, while Tituss Burgess yells at them. It's just as dumb as it sounds, but it knows that, so it's ... a lot of fun?

Hosts Ayo and Teo travel from city to city pitting two dance crews against each other. Teams are given a song, three dance moves to execute and 30 minutes to choreograph. The dancing is impressive, but the show goes out of the way to unpack the technical skills on display.

Profiles one of the thinkiest, artiest queens out there as she puts together a drag revue featuring a diverse roster of divas and ... divos? Drag fans and process nerds, unite!

Note: I should say first that Glen's tour of Quibi was more thorough than mine. While he's watched everything they sent to press, I've dipped in and out a little more. But I did find some things I think are worth checking out. And, like Glen, I gravitated toward the documentary/reality stuff more than the narrative stuff.

If you like your stakes low and your production values shaggy — in the fun way — you might get a kick out of Chrissy Teigen hosting her own courtroom show. With her mom as bailiff, she judges disputes that are goofy rather than ugly.

The Shape Of Pasta

The tone has a self-seriousness that makes it seem at first like it might be parody, which is an issue for a couple of Quibi shows. But this is actually a very earnest food show about ... well, lesser-known shapes of pasta, which chef Evan Funke travels to Italy to discover.

This series looks at fields that exist alongside music performance. The first episode, for instance, deals with how elaborate light shows are designed for live performances. If you're the kind of person who goes for "interesting job" stories, it might be up your alley.

Soccer superstar Megan Rapinoe is the host of Prodigy, which spotlights young athletes who might be the next big thing — like Jalen Green, the No. 1 high school basketball player in the country. It's an effort to do in-depth sports profiles one step before they usually happen, and to identify what it looks like as someone transitions from an ordinary good athlete to potentially A Big Deal.

The Most Dangerous Game

I don't think it would be fair to share impressions of this, my one narrative mention, without disclosing that the screener had, over a show intended to be watched on a phone/tablet, three different watermarks (stuff they splatter over the screen so you can't upload it to piracy sites), plus a running clock up in the corner. It's almost impossible to judge how immersive this Liam Hemsworth/Christoph Waltz series might be if not for that fact, but I will give a shot to just about anything Waltz is in, including this story in which he plays an rich weirdo who pays Hemsworth to go forth and be hunted for sport.