Accessibility links
Voting Confusion Reigns In Wisconsin Despite the pandemic, the state was set to forge ahead with its election on Tuesday. 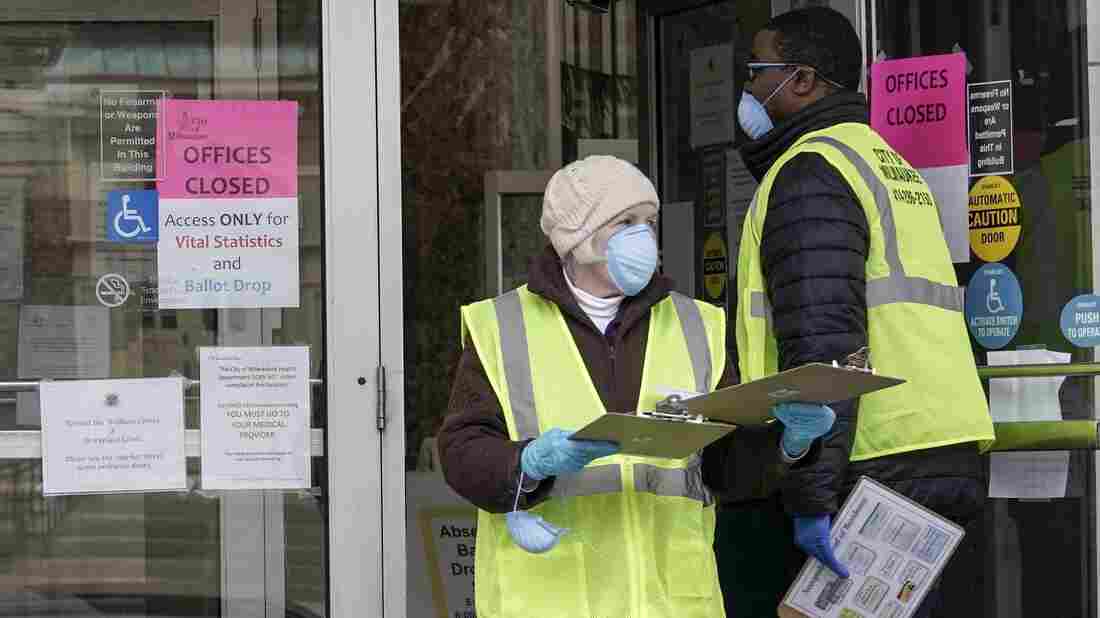 Workers are seen outside a city building in Milwaukee, which set up drive-up early voting for the state's April 7 election in response to the coronavirus outbreak. Morry Gash/AP hide caption

Editor's note at 6:30 p.m. ET.: Wisconsin's state Supreme Court has overruled the governor's order to postpone Tuesday's election and ordered the election to proceed apace. You can follow this developing story here.

When it became clear that Wisconsin's April 7 election wasn't going to be postponed, Dean Kaufert turned to MacGyver, the star of a popular 1980s TV show, for inspiration.

Kaufert, who is mayor of Neenah, Wis., was part of a coalition of mayors who pushed hard for the election to be postponed as coronavirus infections spread in the state.

The mayors said it was going to be impossible for their local clerks to safely and effectively administer the election amid the pandemic.

But their pleas went nowhere. Federal lawsuits looking to delay the election failed and the Republican-controlled state legislature refused to make any changes to the election date or existing election laws. 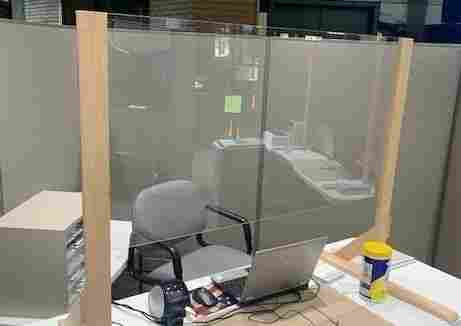 An improvised divider aims to protect voters and poll workers from the coronavirus. Courtesy of Dean Kaufert hide caption

"Everyone was telling me, 'Dean, it's not going to happen. The election is going to move forward,' " Kaufert said. "I said, 'If that's the case, then we're going to do whatever we can to help protect the safety and health of our workers and my citizens.' "

Hence MacGyver. Kaufert asked a city maintenance worker to build Plexiglas barriers to put between poll workers and voters. Kaufert was inspired by screens he saw in his city's finance department, which had just been renovated.

"I sketched something out on paper and gave it to my maintenance guy and within six hours he had a prototype for me," he said.

By the next week, 26 clear shields were situated in front of poll workers helping people cast early ballots in the city of 25,000.

Voters check in using touchscreen electronic poll books. To reduce the risk of touching a potentially contaminated surface, Kaufert did some Googling and figured out how to make reusable writing utensils out of Q-tips and aluminum foil.

Then Kaufert tracked down the owners of an empty department store. 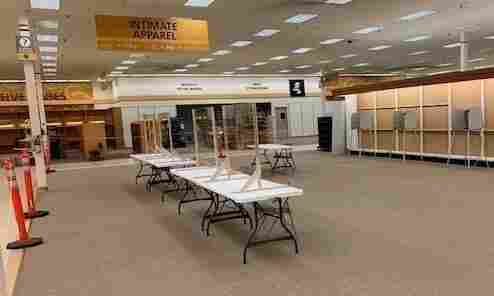 A former department store in Neenah, Wis., has been temporarily converted into a polling place to comply with social distancing guidelines. Courtesy of Dean Kaufert hide caption 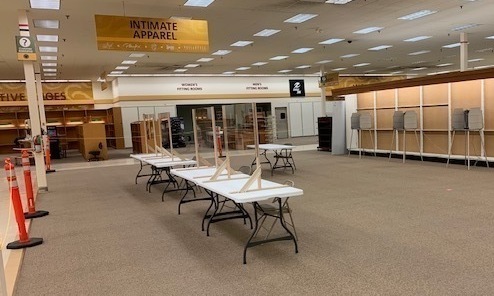 A former department store in Neenah, Wis., has been temporarily converted into a polling place to comply with social distancing guidelines.

"And we're now holding the election in this 90,000-square-foot building with ample space, so everyone can follow the [social distancing] guidelines recommended by the CDC," he said.

Kaufert is particularly happy that the store has automatic doors, so no one will have to touch handles on the way in or out, and that the building has been vacant for several months, so there's no risk of it being contaminated with the virus by previous tenants.

Despite all of these efforts and relative success, Kaufert said he's still "mad as hell" that the election is happening as scheduled.

Many people in Wisconsin agree.

A shortage of 7,000 poll workers statewide

Thousands of poll workers in Wisconsin have been put in the unenviable position of deciding whether to do their job on Election Day or stay safe at home.

Daina Zemliauskas was scheduled to be a chief inspector at her polling place in Madison and said she was brought to tears by the decision.

"I feel guilty. I wanted to hold out," Zemliauskas said. "But, of course, the risk was just too great."

She spent three excruciating hours writing a resignation email to her city clerk. Zemliauskas said the response she got back was "terse," but she understands clerks are under incredible stress right now.

"I thought, why should I put myself, my family and my community at risk?" she said. "You know, this is just outrageous. It's madness."

Like the majority of Wisconsin poll workers, Zemliauskas is older than 60, putting her at higher risk of severe symptoms if she contracts COVID-19.

Last week, Wisconsin's elections agency used a state airplane to fly emergency supplies like isopropyl alcohol wipes, hand sanitizer and more than a million disposable pens to clerks across the state, in an attempt to shore up health and sanitation measures at polling places.

But Zemliauskas' fears — and those of many others — weren't assuaged by that effort.

According to the state elections agency, clerks are now dealing with a shortage of about 7,000 poll workers across the state.

As of last week, Neil Albrecht, the head of elections in Milwaukee, said he was operating with only 400 of his usual 1,400 election workers.

He said he doesn't blame his would-be staff for backing out.

"I come from a place of election worker and public safety first and foremost, and then of course access to voting, but at the end of the day we shouldn't be putting our election workers or the public at risk," he said.

Wisconsin's largest city normally has 180 polling places on Election Day, but Albrecht said on Tuesday it will be down to five for the entire city.

For weeks, Democratic Gov. Tony Evers has been urging people to vote by mail.

But by law, requesting a mail-in ballot in Wisconsin involves using a smartphone to upload a copy of a valid ID for voting, or having the technology to make a physical copy of the ID to send in the mail.

Many say these options are impossible for some voters, particularly senior citizens and low-income people.

"We've been taking literally hundreds, if not thousands, of phone calls per day from voters concerned about how they are going to vote," Albrecht said.

Mary Ellen Spiegelberg of West Allis called her local clerk several times attempting to request a mail-in ballot, but was having trouble with the technical requirements.

"I'm still using a Tracfone flip phone," Spiegelberg said. "I'm in the process of looking for a smartphone of one type or another, but I don't have that yet."

She said she's voted in "nearly every election for more than 70 years" and is determined to find a way to cast a ballot, even if it means risking public exposure on Election Day. She's looking into sewing face masks for herself and her husband.

"I still want to vote, and so does my husband," Spiegelberg said. "We are accustomed to voting in every election and this is an important one."

In Milwaukee, the Rev. Greg Lewis is also concerned that many of his neighbors won't be able to vote.

"It's already difficult trying to get people in my neighborhood to come out and vote because we don't think our vote really counts," said Lewis, who's president of Souls to the Polls, a group that works to mobilize black voters in Milwaukee.

Milwaukee's black community has been hit particularly hard by COVID-19. There have been several deaths. And Lewis himself has been diagnosed with the virus.

When the choice is between navigating the absentee ballot process or risking going to the polls in person, voting is going to be "practically impossible" for many in his community, he said.

"And that is so, so incredibly heartbreaking," Lewis said.

"We live in a republic, and we live in one that has to have elections," says state Assembly Speaker Robin Vos (center). Scott Bauer/AP hide caption 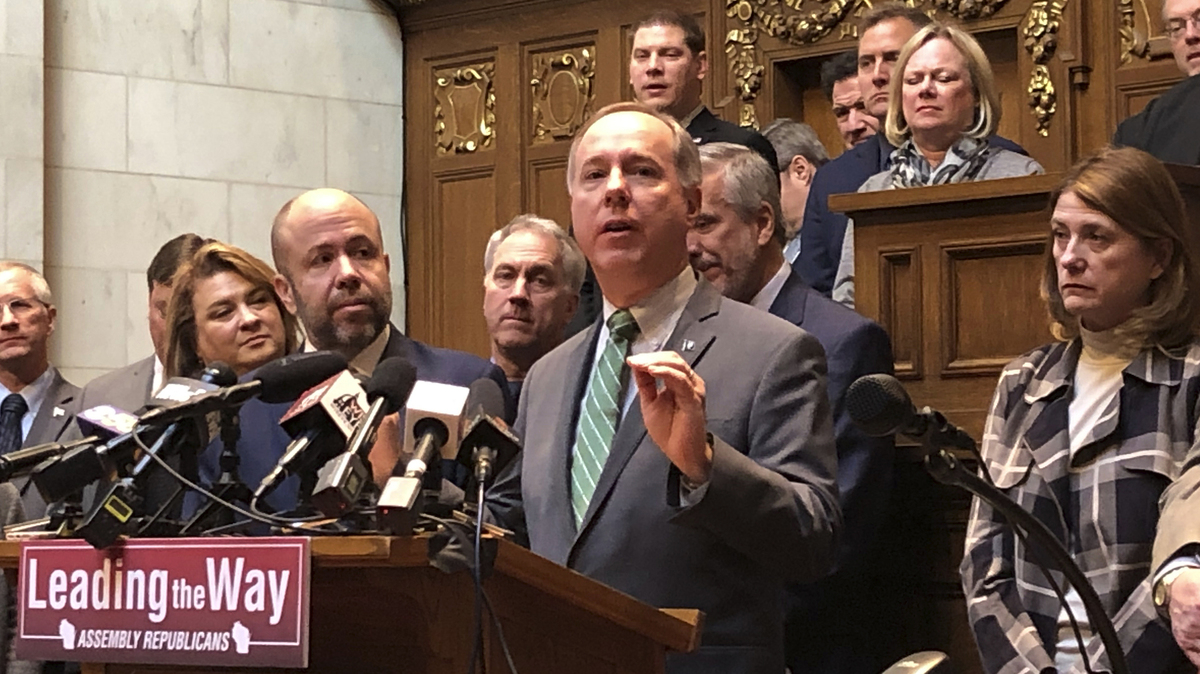 "We live in a republic, and we live in one that has to have elections," says state Assembly Speaker Robin Vos (center).

Wisconsin's election date is written into state law and only the Republican-controlled state legislature can postpone it.

For weeks, state Assembly Speaker Robin Vos and other Wisconsin GOP leaders have opposed making any changes to the election. They argue that it's too late to make it all-mail-in voting, because there isn't enough time to educate voters about the change.

They also point out that Wisconsin's spring election is not just a presidential primary; it's also a general election for hundreds of local offices, like mayor, county executive and county board. The winners of many of those races are scheduled to take office in April.

"We live in a republic, and we live in one that has to have elections," he told reporters two weeks ago.

Vos and state Senate Majority Leader Scott Fitzgerald rebuffed the governor's call on Friday for a special session of the legislature over the weekend to act on proposals to shift the election to entirely by mail, and to delay deadlines for clerks' receipt and counting of ballots until May.

The governor had been pushing for an all-mail election for a while, but Friday was the first time he said it should be delayed until May.

Vos says he plans to work at a polling place in his district on Election Day.

"I'm looking forward to the pride that I'm going to feel knowing that there were hopefully a million Wisconsinites who did the right thing and cast their ballot, whether by mail or in person, because democracy has to continue," he said.

A federal judge ruled last week that Wisconsin voters will have until April 13 to get their mail-in ballots to their local clerk, which means results won't be known until next week. But that's the least of most people's worries right now.