Accessibility links
Opinion: The Coronavirus Crisis Presents An Opportunity To End War In Ukraine "Especially during a pandemic, it is insanity for Russian-led forces and Ukrainians to be killing each other," write former U.S. envoys to Ukraine William B. Taylor, Steven Pifer and John E. Herbst.

Opinion: The Coronavirus Crisis Presents An Opportunity To End War In Ukraine

Opinion: The Coronavirus Crisis Presents An Opportunity To End War In Ukraine 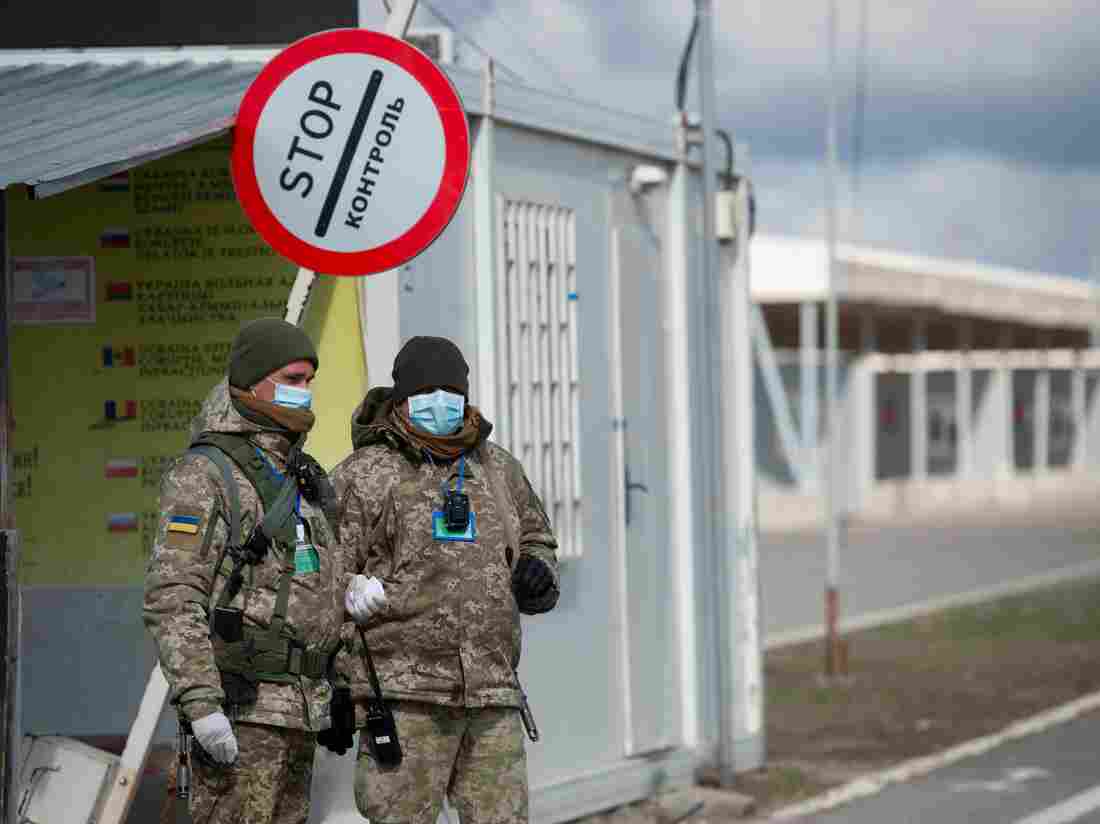 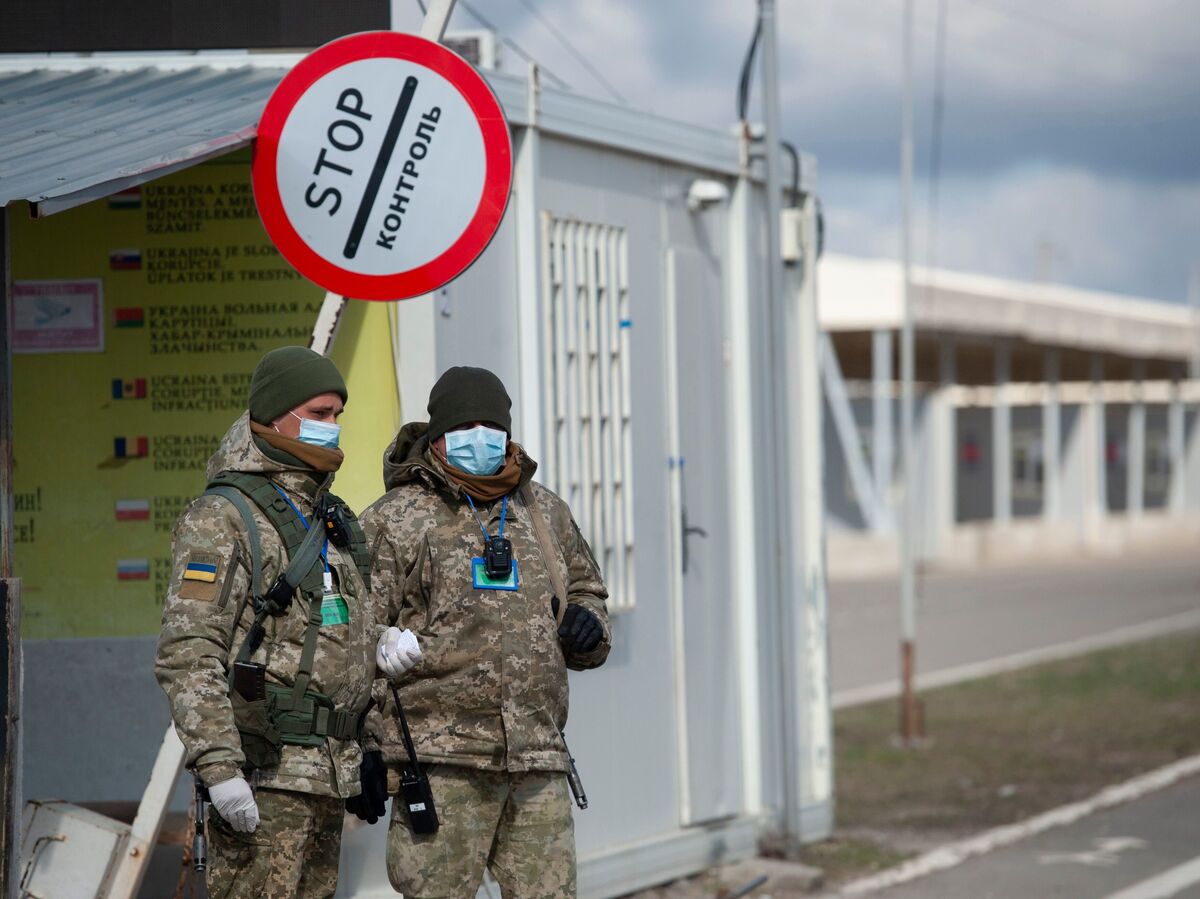 Ukrainian border guards wear protective face masks at a checkpoint with the territories controlled by Russia-backed separatists in the Donetsk region.

In the midst of the damage to public health and the global economy, the COVID-19 crisis could present an unexpected opportunity both to resolve the only hot war in Europe and to address Russian President Vladimir Putin's assault on international norms of behavior.

As the spreading coronavirus and collapsing oil prices weigh increasingly on the Kremlin, the United States and its allies should offer to lift international sanctions against Russia if Putin will end his military incursions into Ukraine. President Trump and Congress can advance America's interests, and the world's, with a bold step to encourage an end to this war. The Trump administration and Congress should seize this opening.

Since Russia invaded Ukraine's Crimea and Donbas regions in 2014, Russian forces and their local proxies have killed 14,000 Ukrainians in Ukraine's eastern provinces of Donetsk and Luhansk. The Russian-led forces periodically escalate the fight, most recently in February. The war continues to damage Russian interests, European and Western security — and a world governed by laws rather than by force of arms.

The international community opposed Moscow's assaults with economic and other sanctions that have helped to depress Russian economic growth by 1% annually since 2014. The price of crude oil, a mainstay of Russia's economy, has now hit an 18-year low. Fossil fuels account for over 60% of Russian exports.

The looming global recession will deliver another blow to the Russian economy. Now more than ever Russia needs a break from sanctions. Indeed, Putin used his speech to last week's Group of 20 virtual summit conference to urge a halt to all international sanctions. He called sanctions relief "a humanitarian issue" in light of the COVID-19 pandemic.

As bipartisan U.S. policy has made clear, Russia's withdrawal from its costly war in Ukraine is the way to get sanctions lifted. A withdrawal agreement would free up resources in both Russia and Ukraine to fight the virus.

While years of diplomacy to end the Ukraine war have stalled, a high-level push now from the United States could break that deadlock. The coronavirus crisis could provide the Kremlin a rationale to agree.

In close cooperation with the leaders of Germany, France and Ukraine, President Trump should propose to President Putin an end to the fighting, the return of Donbas and the international border to Ukrainian sovereignty, and the removal of the sanctions imposed on Russia for its Donbas intrusion.

If Putin were willing to withdraw from Crimea, the other sanctions imposed against that illegal annexation could be lifted as well. But the major penalties are directed against Moscow's aggression in Donbas, and the West can lift those while maintaining sanctions on Moscow for its seizure of Crimea.

The essentials of a deal — if not the order in which to apply them — have been set in the so-called Minsk negotiations among Ukraine, Russia and the Organization for Security and Cooperation in Europe. They are a cease-fire, OSCE-verified withdrawal of Russian-led forces, return of the border to Ukrainian control, local elections and some measure of decentralized decision-making for all Ukrainian administrative regions.

To ensure security in Donbas during the process, one idea is to have joint patrols by national Ukrainian police and local police still now working in occupied Donbas. That arrangement could be overseen by the OSCE and — to help ensure fair, secure elections — should be buttressed by an international peacekeeping mission. That peacekeeping force would be authorized by the United Nations Security Council and led by a neutral nation. A key requirement would be for the Ukrainian international border with Russia to be controlled by the peacekeepers rather than, as now, Russia's military.

In Washington, President Trump would need congressional support to remove the sanctions on Russia, and many in Congress are rightly skeptical that the Kremlin would act in good faith. But the bipartisan consensus that imposed those sanctions in the first place should permit their carefully conditioned removal.

President Trump, with support from Ukrainian President Volodymyr Zelenskiy, should be able to persuade Congress to remove the Donbas sanctions, with the explicit understanding that they would be re-imposed if Putin reneges on agreements.

Those same conditions would need to underpin a consensus among the United States, its European partners and NATO allies. With bipartisan and transatlantic support, President Trump would be able to engage directly with President Putin.

The looming health and economic threats of the coronavirus pushed Ukraine's parliament last week to advance controversial land-sale and bank reforms needed to qualify for crucial loans from the International Monetary Fund. Russia, which for months has played down the virus threat, followed other nations in tightly restricting people's movements out of their homes.

Especially during a pandemic, it is insanity for Russian-led forces and Ukrainians to be killing each other. The Kremlin's aggression must be ended. All nations need to focus now on fighting the coronavirus, not their neighbors.