Accessibility links
Navy Boss Says Skipper He Removed Was Naive, Stupid Or A Betrayer During an unannounced visit to the USS Theodore Roosevelt on Sunday, acting Navy Secretary Thomas Modly tried justifying to its catcalling crew members his sacking of their skipper.

"Too naive or too stupid"

1:56
Acting Navy Secretary Lashes Out On Virus-Plagued Ship At Commander He Fired 1:56 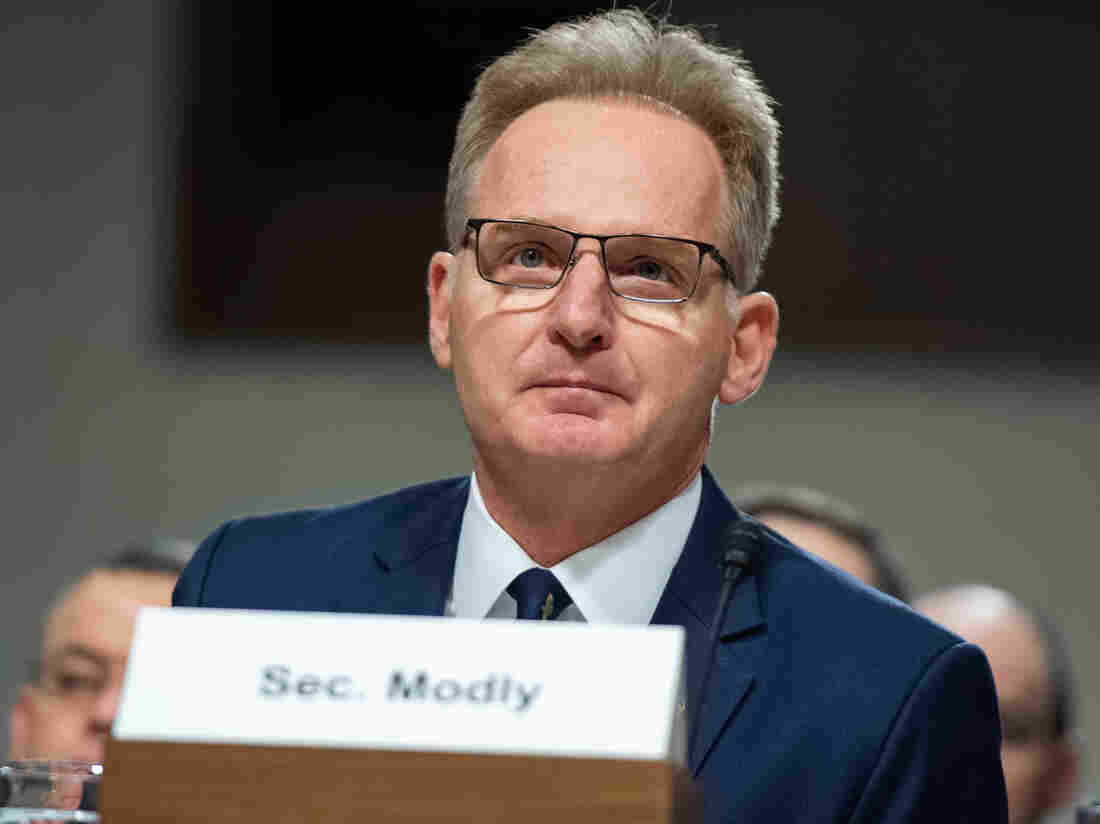 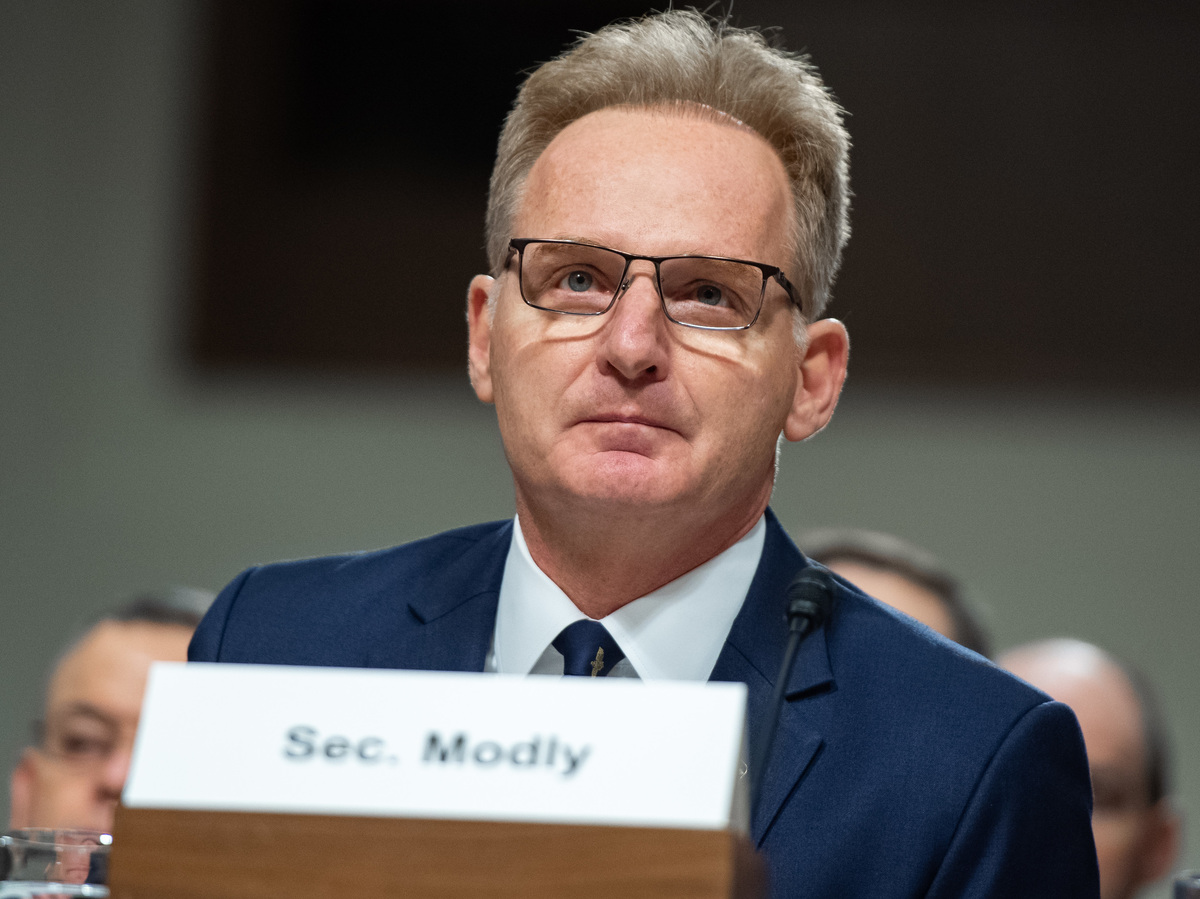 Acting Secretary of the Navy Thomas Modly testifies at a Senate hearing on Dec. 3.

NPR has obtained an audio recording of Modly's remarks.

Much of the diatribe delivered by the Navy's top civilian to the ship's audibly grumbling crew was a condemnation of a March 30 letter that Crozier emailed to his superior officials. It describes dire conditions on the Roosevelt as thousands of crew members remained on board despite dozens of confirmed cases of coronavirus infection.

The letter leaked and set off a furor on March 31, the day the San Francisco Chronicle broke the first story about it.

"It was my opinion that if he didn't think that information was going to get out into the public in this information age that we live in, then he was a) too naive or too stupid to be the commanding officer of a ship like this," Modly said to the sailors (at that point, a voice can be heard yelling, "What the f***?"). "The alternate is that he did it on purpose, and that's a serious violation of the uniform code of military justice, which you are all familiar with."

Listen to part of the recording obtained by NPR here:

"Too naive or too stupid"

"Let me be clear, I do not think Captain Brett Crozier is naïve nor stupid. I think, and always believed him to be the opposite.  We pick our carrier commanding officers with great care.  Captain Crozier is smart and passionate.  I believe, precisely because he is not naive and stupid, that he sent his alarming email with the intention of getting it into the public domain in an effort to draw public attention to the situation on his ship."

Modly also said he wanted "to apologize directly to Captain Crozier, his family, and the entire crew of the Theodore Roosevelt for any pain my remarks may have caused."

Last Thursday, while announcing that he had relieved the 50-year-old former Navy helicopter and F-18 fighter jet pilot of his command, Modly insisted he had "no information" that Crozier had anything to do with the leaking of the emailed letter to the Chronicle. But aboard the Roosevelt, the acting Navy secretary painted a more damning portrait of the sacked commander's alleged intentions.

"It was a betrayal, and I can tell you one other thing: Because he did that, he put it in the public's forum, and it's now become a big controversy in Washington, D.C., and across the country about a martyr [commanding officer] who wasn't getting the help he needed and therefore had to go through the chain of command, a chain of command which includes the media," Modly asserted. "And I'm gonna tell you something, all of you: There's never a situation where you should consider the media a part of your chain of command."

Modly warned the crew, who gave Crozier a rousing hero's send-off as he left the ship Thursday, that the news media "has an agenda."

"And the agenda that they have depends on which side of the political aisle they sit, and I'm sorry that's the way the country is now, but it's the truth," said the man who has been acting Navy secretary since last November, when former Navy Secretary Richard Spencer was forced out. "And so they use it to divide us, they use it to embarrass the Navy, they use it to embarrass you, while you're out here, dealing with something that this country hasn't had to deal with in over a hundred years."

Pivoting from pillorying the news media, Modly assured the sailors that the American people "think, of all the people in the world that can keep their s**t together in something like this, it's the United States Navy and our sailors," he said, adding that it is their duty not to complain. "If this ship was in combat and there were hypersonic missiles coming at you, you'd be pretty f*****g scared too. But you do your jobs."

Modly also defended his decision, which he insists was his own, to remove Crozier from his command.

"The former vice president of the United States, Joe Biden, suggested just yesterday that my decision was criminal," Modly said, apparently referring to comments Biden made Sunday on ABC's Meet the Press and subsequently posted on Twitter. "I assure you it was not, because I understand the facts, and those facts show that what your captain did was very, very wrong in a moment when we expected him to be the calming force on a turbulent sea."

Modly alleged that Crozier's letter had also demoralized those working in the U.S. territory of Guam with respect to accommodating sailors leaving the Roosevelt to be quarantined onshore.

"So think about that when you cheer a man off the ship who exposed you to that," he added. "I understand you love the guy. It's good that you love him, but you're not required to love him."

The Defense Department initially made no mention in its public advisories of Modly personally calling on the Roosevelt. It provided no transcript of the remarks he made there, calling it "a private visit " by the Navy's top civilian.

On Monday, several hours after an audio recording of his remarks was leaked, Modly issued a statement.

"I have not listened to a recording of my remarks since speaking to the crew so I cannot verify if the transcript is accurate. The spoken words were from the heart, and meant for them," he wrote in a message emailed by the Pentagon's press operation. "I stand by every word I said, even, regrettably any profanity that may have been used for emphasis."

Asked at a White House news conference Monday evening about the dispute between the acting Navy secretary and Crozier, President Trump suggested he may personally intervene to resolve the matter.

"You have two good people and they're arguing," he said. "I'm good at settling these arguments."

Trump said Crozier should not have sent the letter. "It shows weakness," he said, calling it unfair to the families of the warship's crew.

"His career prior to that was very good," Trump said of Crozier. "I don't want to destroy somebody for having a bad day."

Crozier could not be reached for comment. On Sunday, The New York Times reported that friends said the captain had tested positive for the coronavirus and was "sitting alone in the 'distinguished visitors quarters' on Naval Base Guam, battling a coronavirus infection."

Meanwhile, a U.S. Navy blog reported on Monday that efforts continue toward a goal of testing 100% of the Roosevelt's crew of 4,865.

"As of today, 61% of the USS Theodore Roosevelt crew have been tested for COVID-19, with 173 positive cases so far," the blog noted. "Additionally, 1,999 Sailors have moved ashore. As testing continues, the ship will keep enough Sailors on board to sustain essential services and sanitize the ship in port. There have been zero hospitalizations."