Accessibility links
Coronavirus And Animals FAQ: What Does A Sick Tiger Mean For Your Cat? Four tigers and three lions at the Bronx Zoo all had one of the symptoms of a respiratory infection: a dry cough. What does this finding mean for cats and dogs?

A Tiger Has Coronavirus. Should You Worry About Your Pets?

A Tiger Has Coronavirus. Should You Worry About Your Pets? 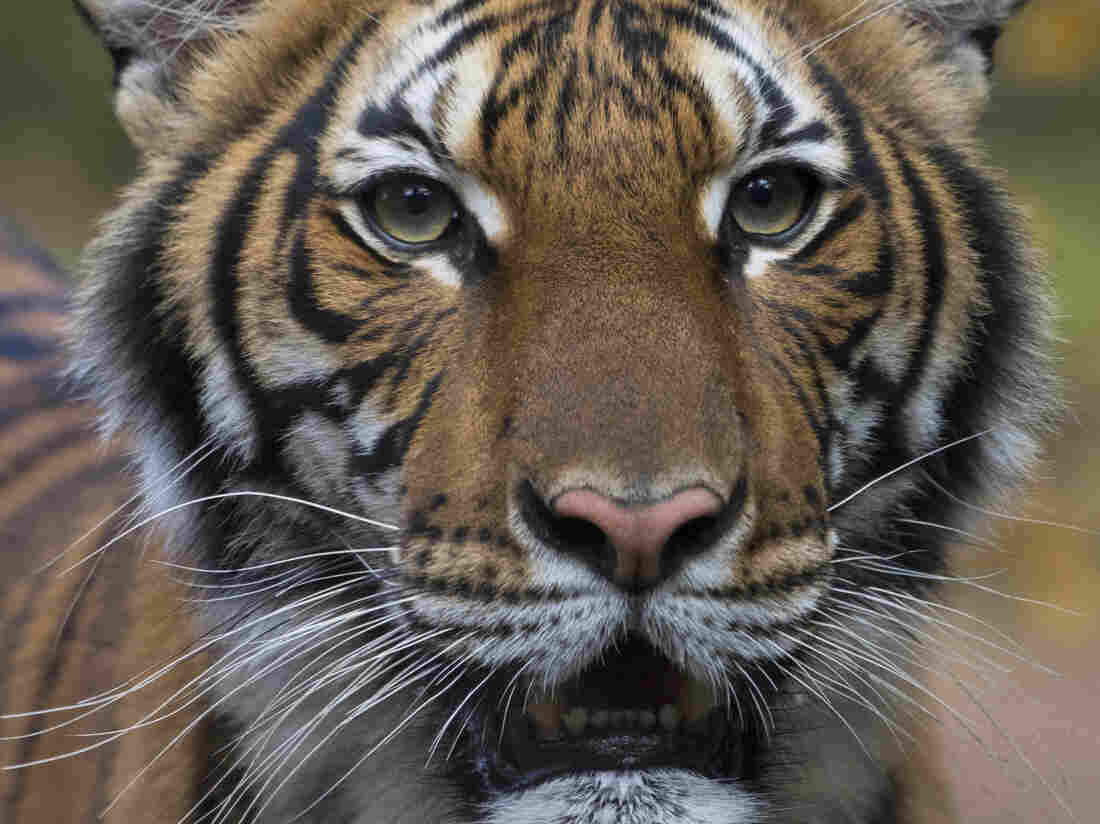 Nadia, a Malayan tiger at the Bronx Zoo in New York, has tested positive for the new coronavirus. It's believed to be the first known infection in an animal in the U.S. Julie Larsen Maher/Wildlife Conservation Society/AP hide caption 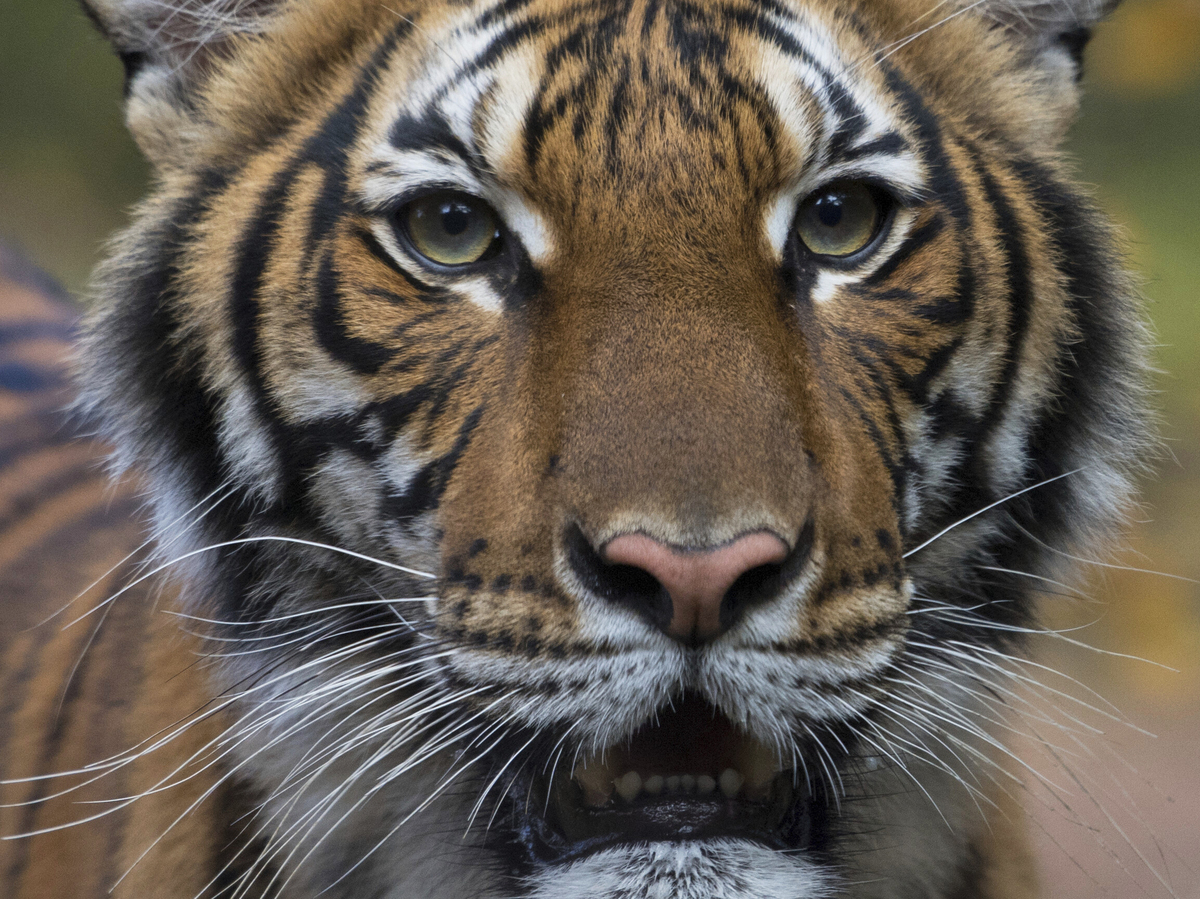 Nadia, a Malayan tiger at the Bronx Zoo in New York, has tested positive for the new coronavirus. It's believed to be the first known infection in an animal in the U.S.

Nadia is a four-year-old Malayan tiger at the Bronx Zoo. Last week, she started exhibiting one of the key symptoms of the novel coronavirus: a dry cough.

And it wasn't just Nadia — her sister Azul, two Amur tigers, and three African lions were all experiencing the same thing. So the zoo got permission from local and state health departments and animal health authorities, and took a sample from Nadia to be tested for the SARS-CoV-2. The sample was analyzed at the University of Illinois and Cornell University, and the presumptive positive finding confirmed at a U.S. Department of Agriculture lab in Iowa.

That positive makes Nadia the first known infection case of an animal in the U.S., the CDC says.

That result raises a number of questions about the virus, and how it could affect the animals we spend time with. We'll tackle those questions here.

How do you test a tiger for coronavirus?

The test involved an oral swab, a nasal swab, and procedure called a tracheal wash, which allows for sampling of the animal's airways.

Only one of the ill animals was tested because collecting diagnostic samples in big cats requires general anesthesia, according to the USDA, which announced the finding. "Since all tigers and lions were exhibiting similar respiratory symptoms, the attending veterinarian felt it was in the best interest of the animals to limit the potential risks of general anesthesia to one tiger for diagnostics," it said.

Coronavirus FAQs: Does It Live On Clothes? Can My Dog Infect Me? Any Advice On Wipes?

How did the tiger get tested when a lot of people still can't?

The sample from Nadia was tested at veterinary diagnostic labs that aren't approved to analyze human tests. The testing of the tiger "did not take a test or resources from human health efforts," the zoo said.

Nadia and the other tigers and lions are doing well and improving, the zoo says, though some have a decrease in appetite.

A number of other cat species live at the zoo, including leopards, cheetahs, and pumas; none have showed signs of illness.

Do I need to worry about my cat?

Tigers are a very different species of cat than domestic cats.

"They're even in a different genus," points out Karen Terio, chief of the zoological pathology program at the University of Illinois and an expert on medical issues affecting wild cats.

With more than a million global coronavirus cases among humans, and the many, many people who have cats as pets, Terio says it's significant that the first clinical case confirmed in the U.S. was a tiger, not a domestic cat.

"It suggests to me that there's probably a lot of differences in how different cat species even respond to the virus," she says. "That unfortunately means there's a whole lot more we don't know about this virus."

In Belgium, there was a cat that reportedly tested positive for the virus, but there are some issues with that case.

Leyi Wang is a veterinary virologist at the University of Illinois with expertise in coronaviruses in animals. He created one of the tests used to analyze the tiger's sample.

He says the same factors that affect the severity of COVID-19 in humans would affect the disease in cats, as well: age and other underlying health conditions.

Can I catch the coronavirus from animals?

There is no evidence so far of the virus being transmitted from animals to people, other than the origin of the virus itself.

Scientists believe this coronavirus may have started with a "spillover event" from horseshoe bats in China that could have spread to other animals, which were then eaten by people.

The CDC says it "is aware of a very small number of pets, including dogs and cats, outside the United States reported to be infected with the virus that causes COVID-19 after close contact with people with COVID-19. CDC has not received any reports of pets becoming sick with COVID-19 in the United States. To date, there is no evidence that pets can spread the virus to people."

Did all the sick lions and tigers at the Bronx Zoo get the virus from the human worker? Or could it have spread among the cats?

We don't necessarily know, says Terio. "Remember we have only the one tiger that has been confirmed to be infected," she says. "We are presuming that the other ones — because the clinical signs and the symptoms happened kind of at the same time and are very similar — that they are probably part of that case cohort."

Researchers in China have posted the preliminary results of their study (not yet peer-reviewed), which found that some domestic cats were susceptible to the virus and that the virus could spread via respiratory droplets between them. The study found that dogs had a low susceptibility to the virus. There have been reports of two dogs in Hong Kong testing positive for the virus.

Is the infection in the tiger the same as it is in humans?

Researchers at Illinois sequenced the virus from the tiger and found it was over 99.6% identical to the virus that occurs in humans, Wang says.

Do I need to keep animals at a social distance?

If you are feeling sick, the answer is yes.

The CDC advises restricting contact with pets and other animals if you are suspected or confirmed of having COVID-19 – just as you're advised to stay away from other people. Have someone take care of your pet while you're sick, if you can.

If you're not sick, just practice normal good pet hygiene. Wash your hands after handling animals, their food, waste or supplies — that will protect you from a variety of germs that animals carry.

Should I get my animal tested for coronavirus?

The USDA and the CDC don't recommend routine testing of animals for the virus. But the USDA says the situation could change, and "public and animal health officials may decide to test certain animals out of an abundance of caution."

If you think your animal has the virus, call your local veterinary clinic.

Does this finding about the tiger have any scientific importance?

It's another piece of data about a virus that is still mysterious in many ways.

"Our understanding of the virus is evolving constantly. We're learning so much about this virus and how it's transmitted in humans now and in animals," says Terio. "The more information that we have, the better we'll be able to understand and then hopefully mitigate and prevent the spread of the virus further."