Accessibility links
John Prine Dies At 73 After Developing COVID-19 Symptoms The beloved singer-songwriter who influenced generations of folk, country and Americana artists died Tuesday at the age of 73. 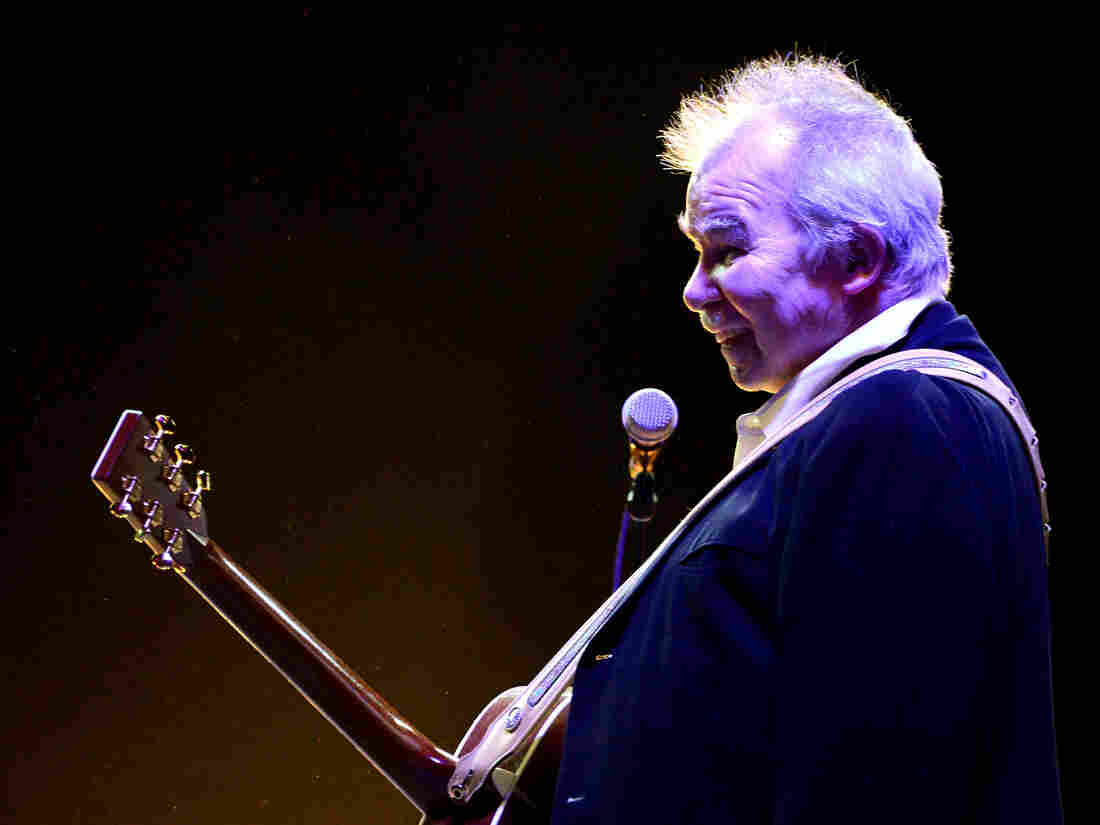 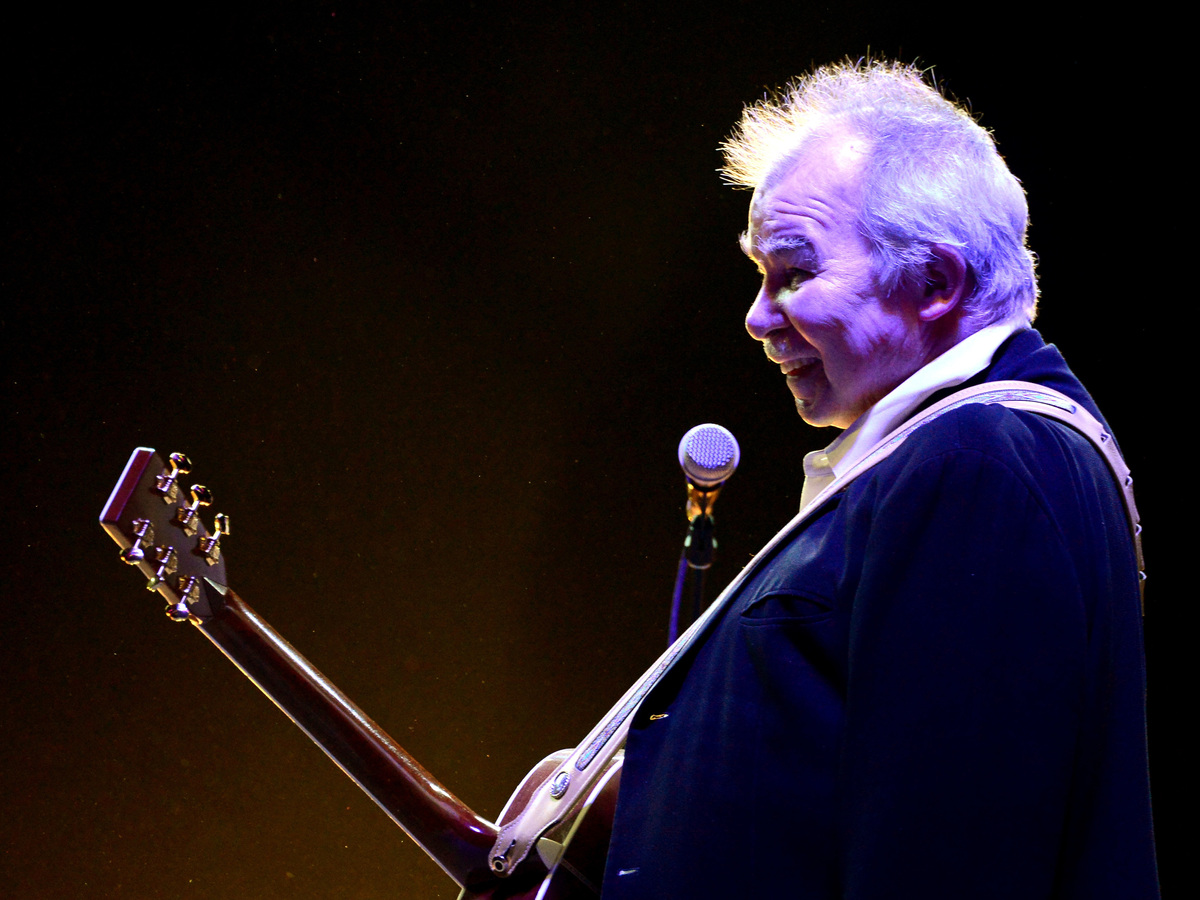 John Prine, a wry and perceptive writer whose songs often resembled vivid short stories, died Tuesday in Nashville from complications related to COVID-19. His death was confirmed by his publicist, on behalf of his family. He was 73 years old.

Prine was hospitalized last week after falling ill and put on a ventilator Saturday night, according to a statement from his family.

John Prine's Songs Saw The Whole Of Us

Even as a young man, Prine — who famously worked as a mailman before turning to music full-time — wrote evocative songs that belied his age. With a conversational vocal approach, he quickly developed a reputation as a performer who empathized with his characters. His beloved 1971 self-titled debut features the aching "Hello In There," written from the perspective of a lonely elderly man who simply wants to be noticed, and the equally bittersweet "Angel From Montgomery." The latter song is narrated by a middle-aged woman with deep regrets over the way her life turned out, married to a man who's merely "another child that's grown old."

Bestowing dignity on the overlooked and marginalized was a common theme throughout Prine's career; he became known for detailed vignettes about ordinary people that illustrated larger truths about society. One of his signature songs, "Sam Stone," is an empathetic tale of a decorated veteran who overdoses because he has trouble readjusting to real life after the war. (Prine has said he based the protagonist around friends who were Vietnam War veterans, and also soldiers he encountered during his own two-year stint as an Army mechanic.)

Like "Sam Stone," many of Prine's songs also had an uncanny ability to address (if not predict) the societal and political zeitgeist. The understated 1984 song "Unwed Fathers" illustrates pernicious double standards pertaining to gender: The titular group "can't be bothered / They run like water, through a mountain stream," while the young women they impregnate are shamed and face consequences. Recorded for John Prine, "Your Flag Decal Won't Get You Into Heaven Anymore" criticizes people who use piety and patriotism as a cover for supporting an unjust war — a theme he'd revisit on 2005's "Some Humans Ain't Human," which pulls no punches slamming both hypocritical people and the Iraq War started by George W. Bush.

But like fellow songwriting iconoclast Shel Silverstein, Prine also cloaked his pointed commentary within whimsical wordplay. "Some Humans Ain't Human" claims that inside the heart of these turncoats is "a few frozen pizzas, some ice cubes with hair and a broken Popsicle," while "Dear Abby" has a lilting, rollicking rhythm to its verses, as it gently chides advice-column complainers to count their blessings. "Bruised Orange (Chain of Sorrow)" uses both absurdity (an altar boy struck by a train) and the mundane (a bench makeout) to encourage people to stay positive and have gratitude.

And "Christmas In Prison" boasts one of his best lyrics — "She reminds me of a chess game with someone I admire" — while embodying his quiet irreverence. "It's about a person being somewhere like a prison, in a situation they don't want to be in, and wishing they were somewhere else," he wrote in the liner notes to 1993's Great Days: The John Prine Anthology, adding that "I used all the imagery as if it were an actual prison. ... And being a sentimental guy, I put it at Christmas."

Prine was born on October 10, 1946, to parents with strong family ties to Paradise, Kentucky, a place that later served as the backdrop to "Paradise," his cautionary tale about a coal country town destroyed and discarded by corporate interests.

Raised in Maywood, a suburb of Chicago,, the young Prine devoured 45s from Buddy Holly, Johnny Cash and Little Richard, and soaked up the country music his father loved, such as Hank Williams Sr., Ernest Tubb and Roy Acuff. More crucially, Prine learned rudimentary guitar skills from his oldest brother, Dave, a folk fan who memorably gifted him a Carter Family LP. "I learned all those songs," he told NPR's Terry Gross in 2018. "And not too long after that, I started writing when I was 14. And my melodies always came out like old-timey country stuff." Around this time, Prine also started to learn finger-picking by playing songs by Elizabeth Cotten and Mississippi John Hurt, he added: "I'd sit in the closet in the dark in case I ever went blind, to see if I could play."

Although Prine also started taking guitar lessons at Chicago's Old Town School of Folk Music starting in fall 1963, he still wasn't considering pursuing music as a full-time career. In fact, he was working as a mailman and playing gigs at night on the side when a generous live review from critic Roger Ebert in late 1970 boosted his reputation in Chicago's nascent folk scene. A record deal with Atlantic Records came in early 1971, after then-executive Jerry Wexler saw Prine perform three songs during a Kris Kristofferson set at the Bottom Line in New York City. 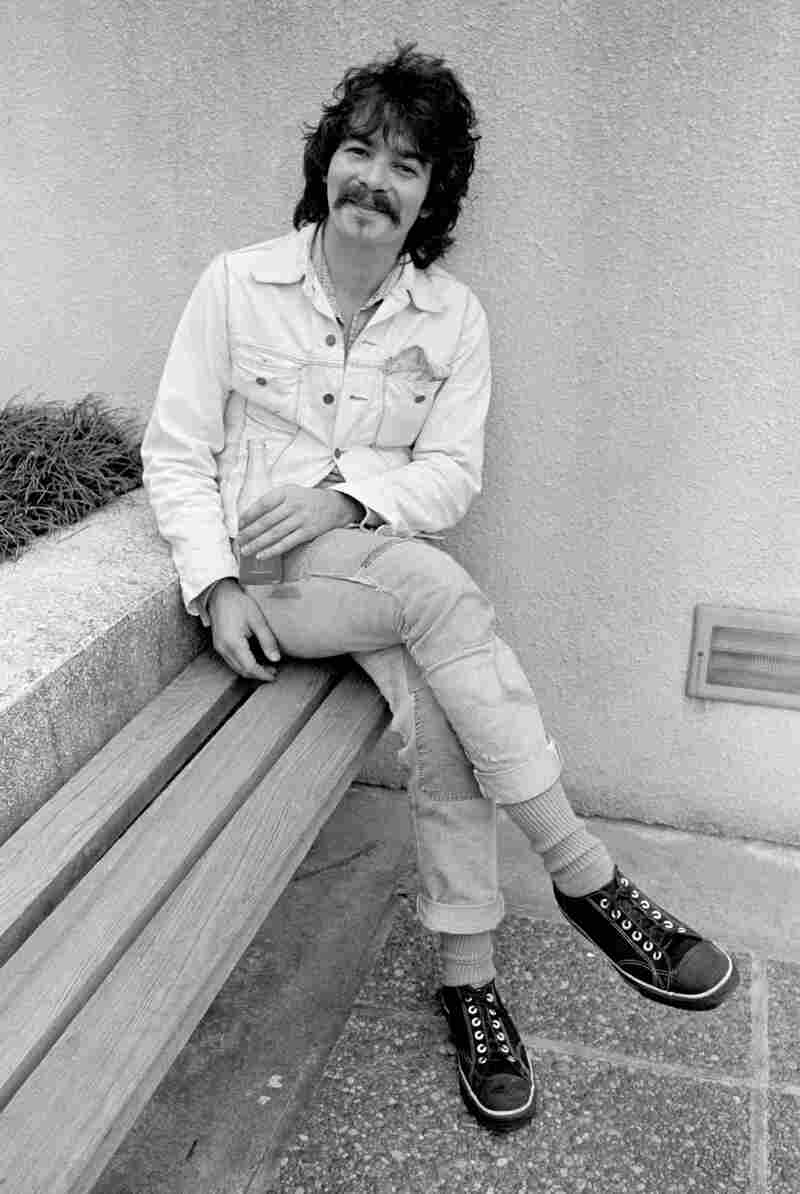 Prine received a Grammy nomination for Best New Artist in 1972, on the strength of his debut, and started turning out records at a brisk pace for the rest of the 1970s. Almost immediately, his songs were covered by other artists: Bonnie Raitt did a version of "Angel From Montgomery" (as did John Denver and Tanya Tucker), while Bette Midler, Everly Brothers, Swamp Dogg and, later, the Highwaymen also recorded Prine-penned songs.

Being in the spotlight didn't come naturally. "I had a difficult time listening back to them because I was so nervous," he told Fresh Air about his early records. "I didn't expect to do this for a living, be a recording artist. I was just playing music for the fun of it and writing songs to ... that was kind of my escape, you know, from the humdrum of the world."

But Prine's early success allowed him to start approaching his career on his own terms. With manager Al Bunetta, he formed the independent label Oh Boy Records in 1981, launching it with a Christmas single, "I Saw Mommy Kissing Santa Claus." Prine slowed down his output in the '80s and '90s but expanded his sonic purview, co-writing "Jackie O" with John Cougar Mellencamp for the latter's hit 1983 LP Uh-Huh and collaborating with members of Tom Petty & The Heartbreakers for his 1991 album The Missing Years, which won a Grammy for Best Contemporary Folk Album. (Prine also won in the same category for 2005's Fair & Square.)

Starting in the mid-'90s, Prine also dealt with several serious health issues. He had a cancerous tumor in his neck removed in 1996, successfully beat lung cancer in 2013 and had a heart stent implanted in 2019. In 2018, he admitted to NPR's Terry Gross that his 1996 cancer surgery changed his voice.

"It dropped down lower, and it feels friendlier to me," he said. "So I can actually sit in the studio and listen to my singing play back. Before, I'd run the other way." He debuted his new voice — which did feel a bit rougher of comfort, like a rock swathed in moss — with 1999's In Spite of Ourselves, which featured duets on covers with female artists such as Iris DeMent, Patty Loveless and Lucinda Williams. He released a kindred-spirit sequel in 2016, For Better, or Worse, that also featured DeMent, in addition to duets with contemporary artists Miranda Lambert, Kacey Musgraves and Morgane Stapleton. 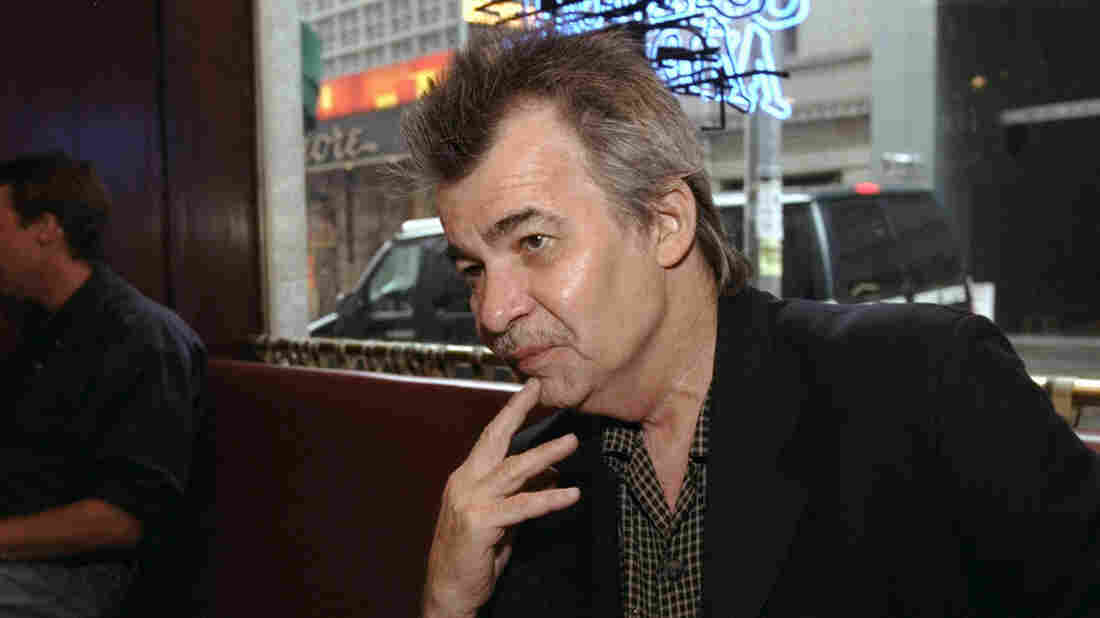 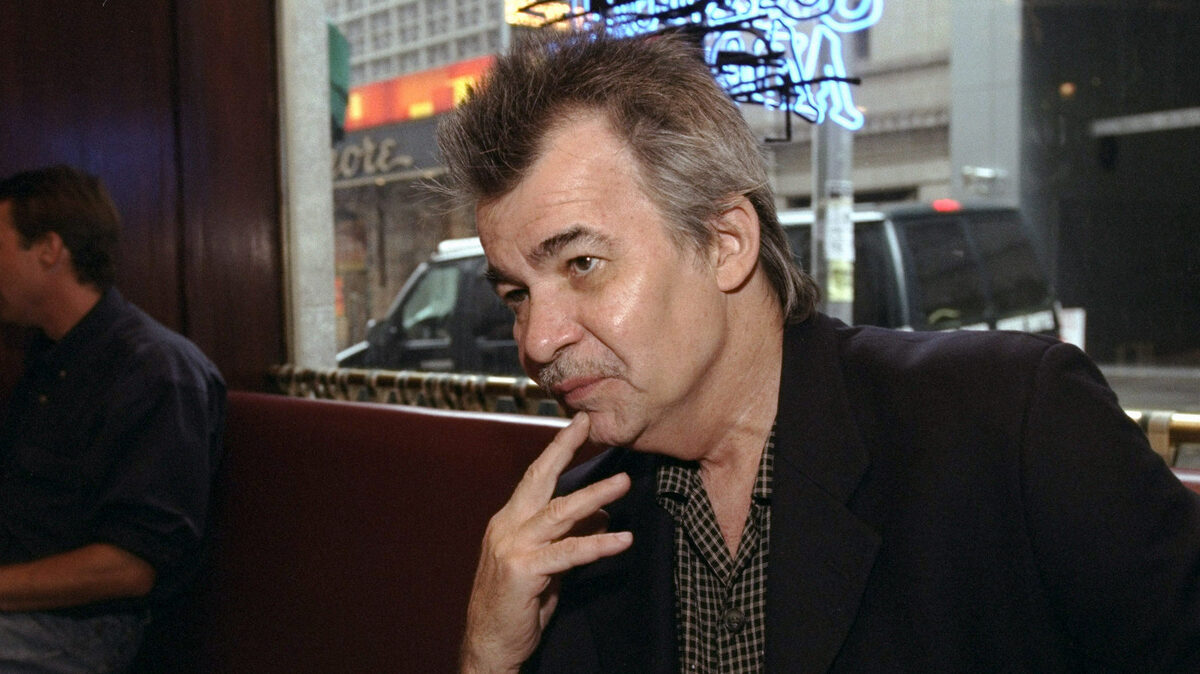 John Prine at the Edison Hotel in Times Square, 1999.

Prine's career received another boost more recently, too, after his work was championed by modern Americana acts such as Jason Isbell and Amanda Shires — two artists with whom Prine collaborated — Sturgill Simpson and Margo Price. In 2019, he was inducted into the Songwriters Hall of Fame, the year after releasing The Tree of Forgiveness, his first album of all-new original songs since Fair & Square. The album featured co-writes with Dan Auerbach and long-time foils Pat McLaughlin and Keith Sykes, and debuted at No. 5 on Billboard's Top 200.

The Tree of Forgiveness ends with a song called "When I Get to Heaven," a detailed look at what Prine said he intended to do after he dies: start a band, see dearly departed family members, order a cocktail, shake God's hand and encourage rampant forgiveness. (In a nod to his usual wry streak, he also said he'd enjoy a cigarette that's "nine miles long.") The lyrics are sentimental and freewheeling, making it clear that Prine planned to keep the good times going up in heaven. It's likely that the song was intended to be a winking bit of foreshadowing about his own mortality, although now, perhaps it's better interpreted as Prine providing a blueprint for how to live life with gusto while you're still here.