Accessibility links
Wisconsin Election Ends Amid Long Lines And Coronavirus Fears After an 11th-hour scramble, Wisconsin forged ahead with its election despite fears about the coronavirus outbreak and an ongoing stay-at-home order. 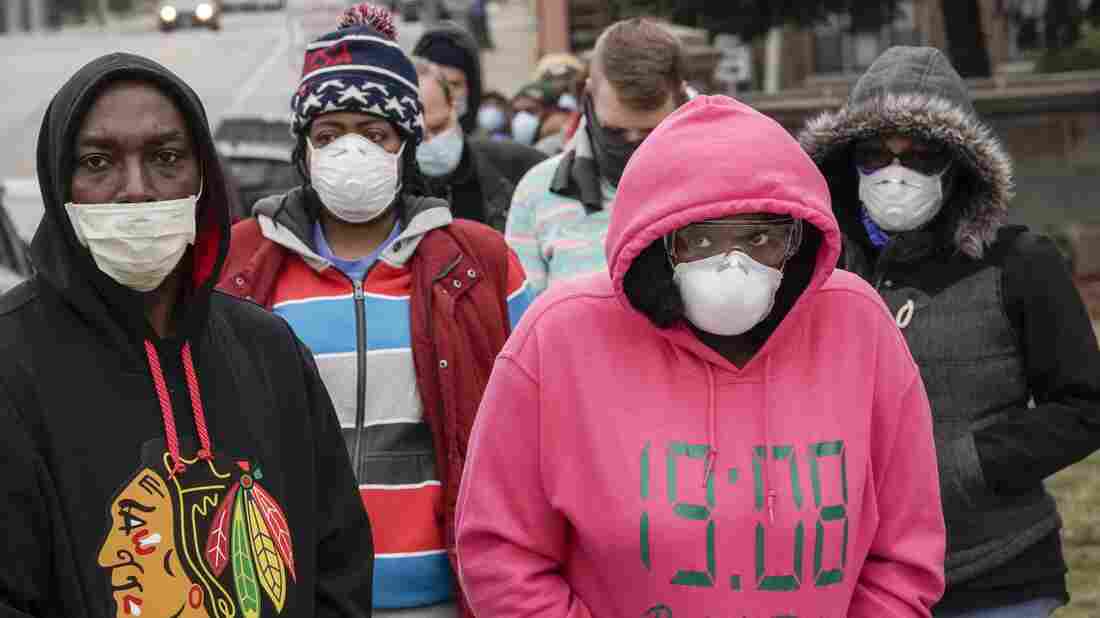 Voters masked to protect from the coronavirus line up at Riverside High School in Milwaukee. Voting went forward in the state, despite the ongoing pandemic. Morry Gash/AP hide caption 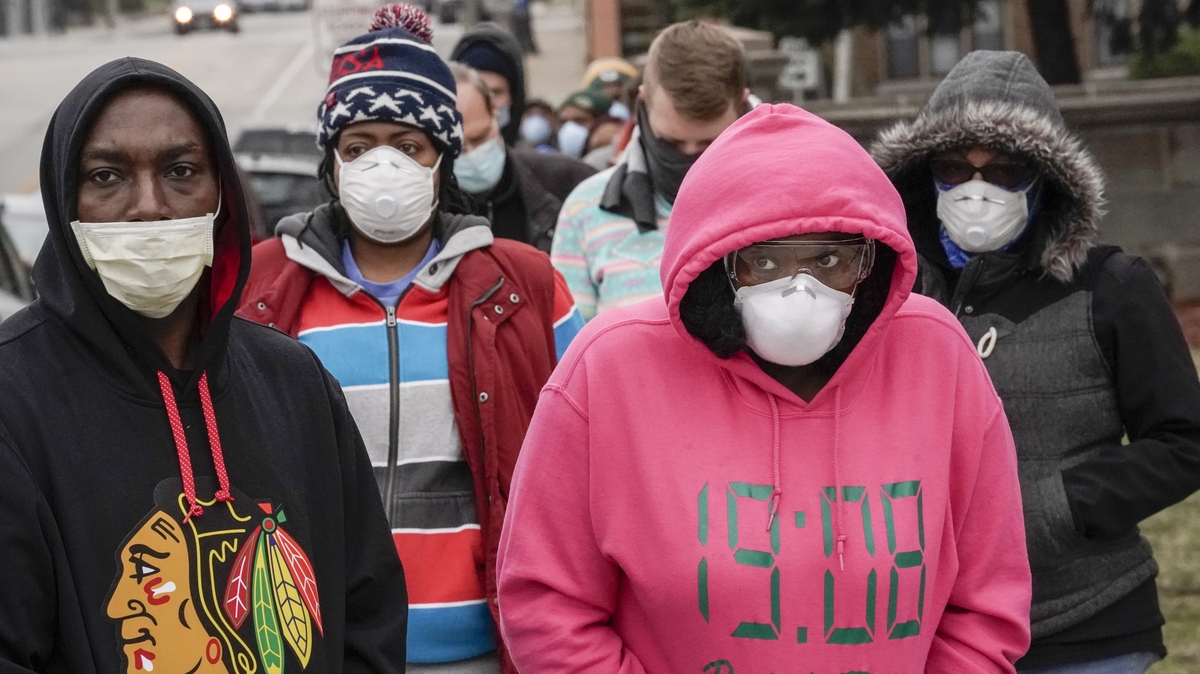 Voters masked to protect from the coronavirus line up at Riverside High School in Milwaukee. Voting went forward in the state, despite the ongoing pandemic.

Evers had sought to delay voting until June but the election went forward after a last-minute intervention by the state Supreme Court on behalf of the Republican leaders in the state legislature, who insisted a vote could be safely carried out and that Evers lacked the power to change the date. Separately, the U.S. Supreme Court Monday overruled a lower court decision to extend the deadline to submit absentee ballots amid the public health crisis, requiring voters to hand in or postmark those ballots by Tuesday evening.

Though hundreds of thousands of voters cast absentee ballots ahead of time, many thousands still turned out to vote in person Tuesday.

During his nightly press conference, Trump was asked how the long lines in places like Milwaukee comported with his administration's social distancing guidelines.

"Ask him," Trump said, referring to Evers. "It's his problem," later adding, "Some governors fail."

Democrats have been seeking to allow more voters to cast mail-in ballots throughout the remainder of 2020 to address fears about in-person voting. Trump has said Republicans would no longer win elections if voter turnout is high and on Tuesday claimed without evidence that mail-in voting was "very dangerous" and susceptible to high levels of fraud. 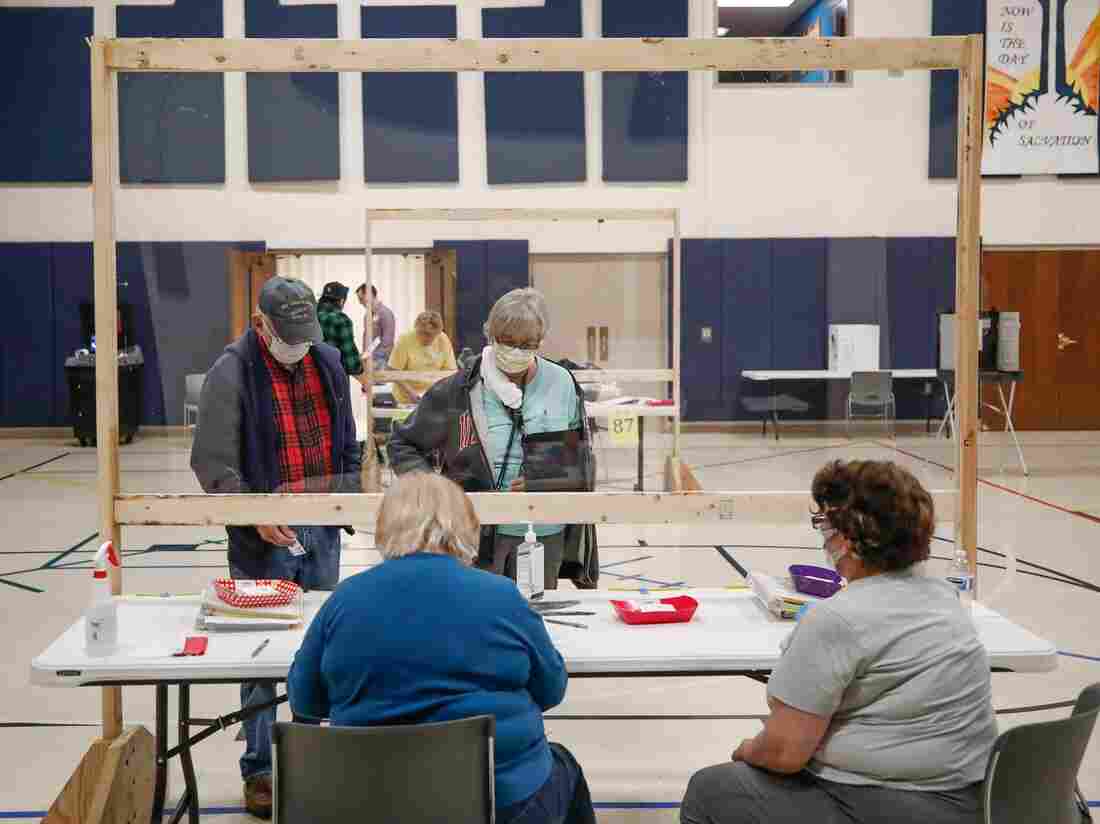 A couple checks in to cast their ballots at the Kenosha Bible Church gym in Kenosha, Wis., on Tuesday. Kamil Kraczynski/AFP via Getty Images hide caption 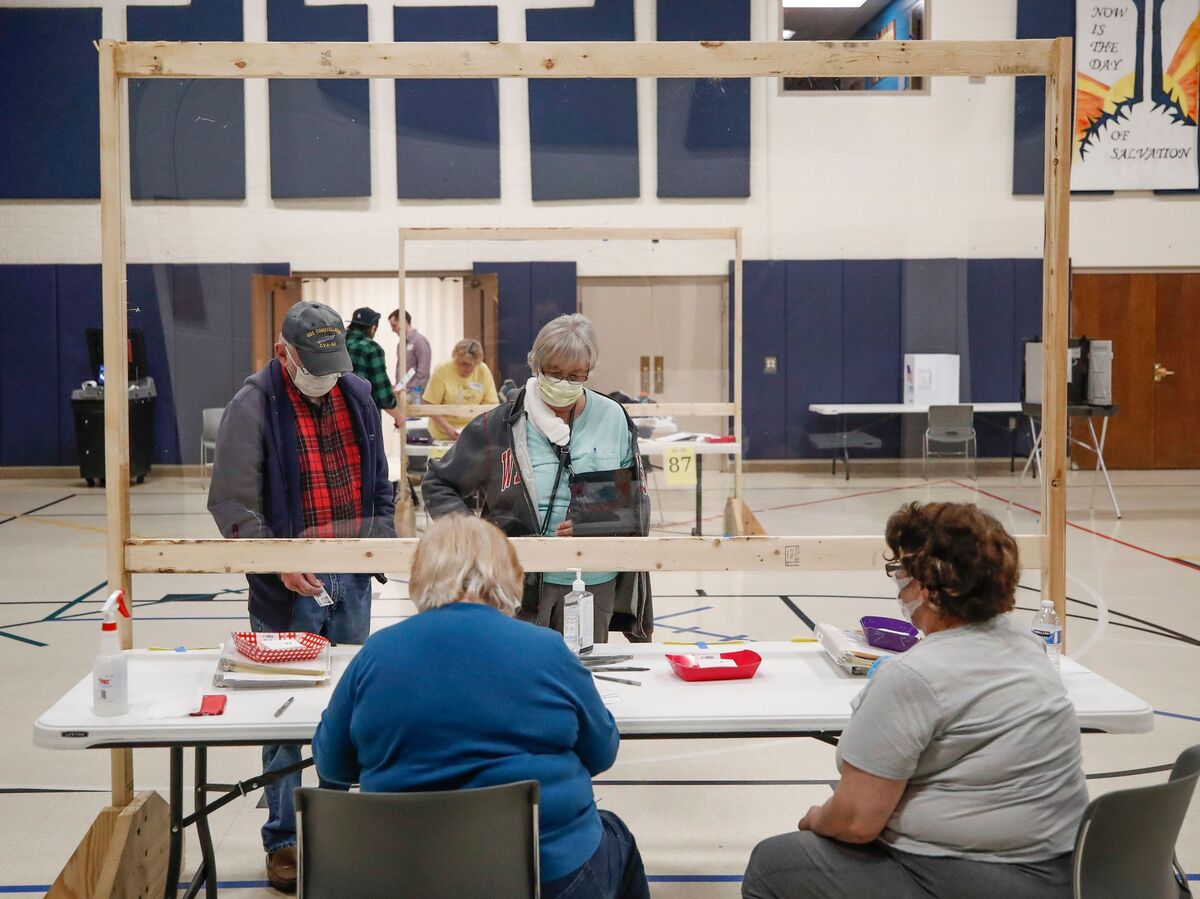 A couple checks in to cast their ballots at the Kenosha Bible Church gym in Kenosha, Wis., on Tuesday.

"This was a dark day for our democracy," said Democratic National Committee chair Tom Perez in a statement. "The craven self-interest of the GOP knows no bounds. They suppressed people's voices and put lives in danger - all in service of their own partisan ambition."

In some municipalities, longer lines were to be expected, due to a shortage of thousands of poll workers that led election officials to have to consolidate voting locations.

The city of Milwaukee, with a total population near 600,000, had just five polling places open on Tuesday, compared with about 180 during normal times. Here, from WUWM reporter Teran Powell, is a look at one location:

Voters lined up at Washington High School on Sherman Blvd. one of only FIVE voting locations for elections.

This is actually 4 minutes worth of video I had to find a way to condense (because I didn't use time lapse on my phone) pic.twitter.com/FeXAskQ6Ou

In line at Milwaukee's Washington High School, Sharron Elliott told Wisconsin Public Radio that she requested an absentee ballot on March 3, but never received it.

Omar Flores of Milwaukee was in a similar position. He said he requested an absentee ballot three days before the state's deadline, but his request went unfulfilled.

He ultimately decided to skip the vote.

"When it comes down to it, nobody should be risking their life in the slightest to be able to vote," he said. 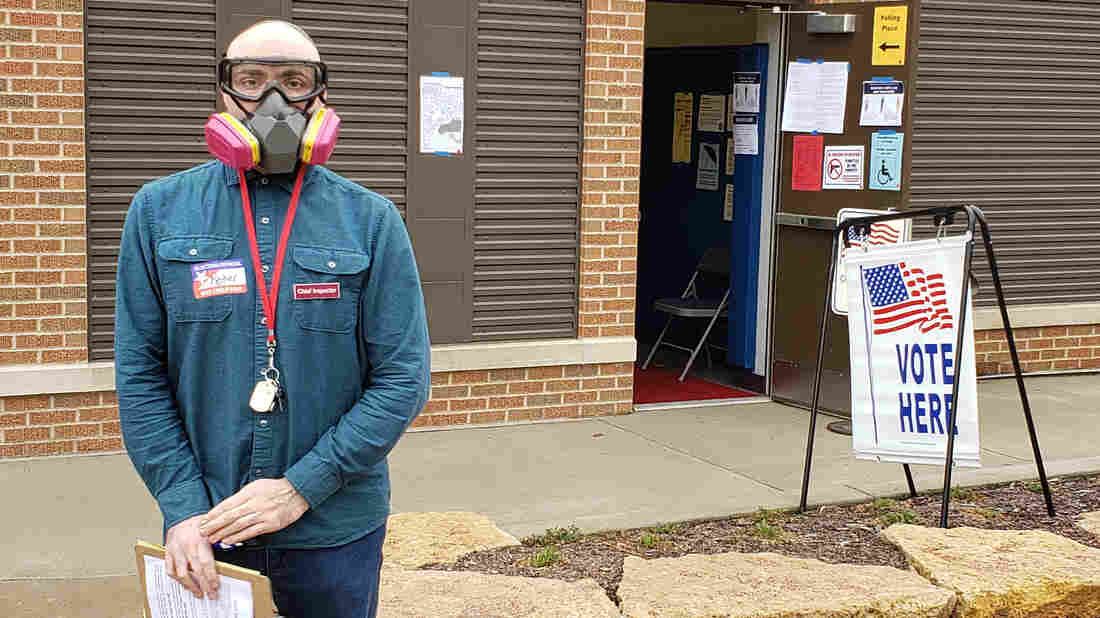 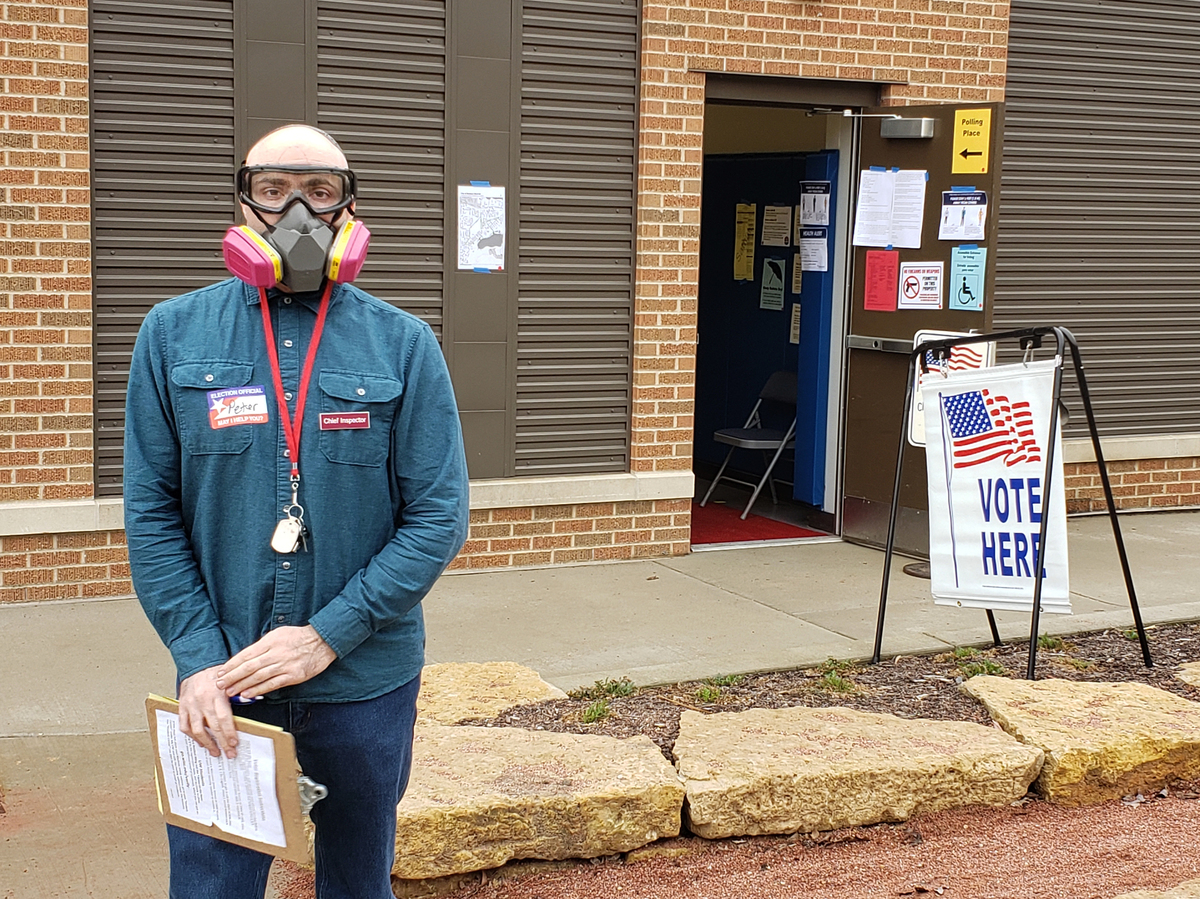 Peter Quinn is chief election inspector for a ward in Madison.

The controversial election came just hours after the Wisconsin Supreme Court overturned an executive order issued by Democratic Gov. Tony Evers to delay in-person voting until June 9, followed by a U.S. Supreme Court order to cut off an extension for absentee voting.

Republican legislative leaders had opposed Evers' push for an election delay, calling it an "unconstitutional overreach."

Wisconsin's presidential primaries were Tuesday, but it also held a number of state and local elections. Many of those offices have terms that begin later this month. 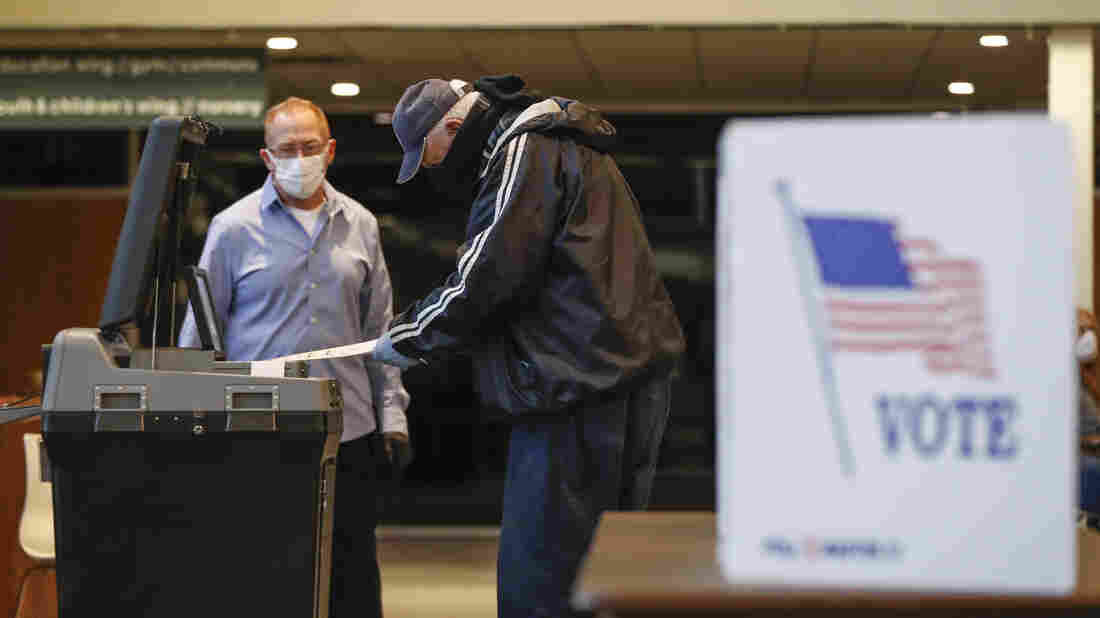 A man casts his ballot in a Democratic presidential primary at Journey Church in Kenosha, Wis. Kamil Kraczynski/AFP via Getty Images hide caption 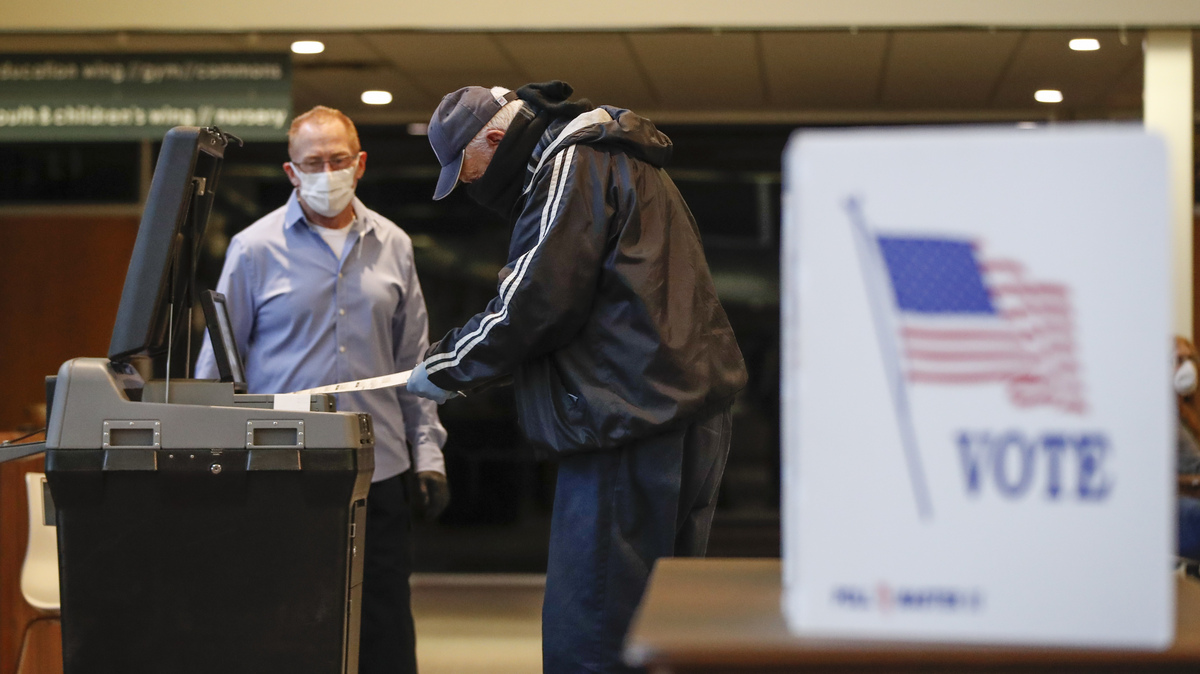 A man casts his ballot in a Democratic presidential primary at Journey Church in Kenosha, Wis.

Wisconsin went forward with its election, though many other states have delayed voting in recent weeks, citing public health concerns.

"Wisconsin is the only state in the nation that has failed to step up and respond responsibly and safely to the current national health pandemic emergency," Jay Heck, director of voting rights group Common Cause in Wisconsin, said in a statement.

The state has been under a stay-home order since March 25. As of Tuesday morning, Wisconsin had more than 2,500 confirmed coronavirus cases and 85 deaths, according to data compiled by Johns Hopkins University.

Opponents of the GOP effort to keep election day as is expressed concern that moving forward as planned would lead to a further spread of cases of COVID-19, the disease caused by the novel coronavirus. 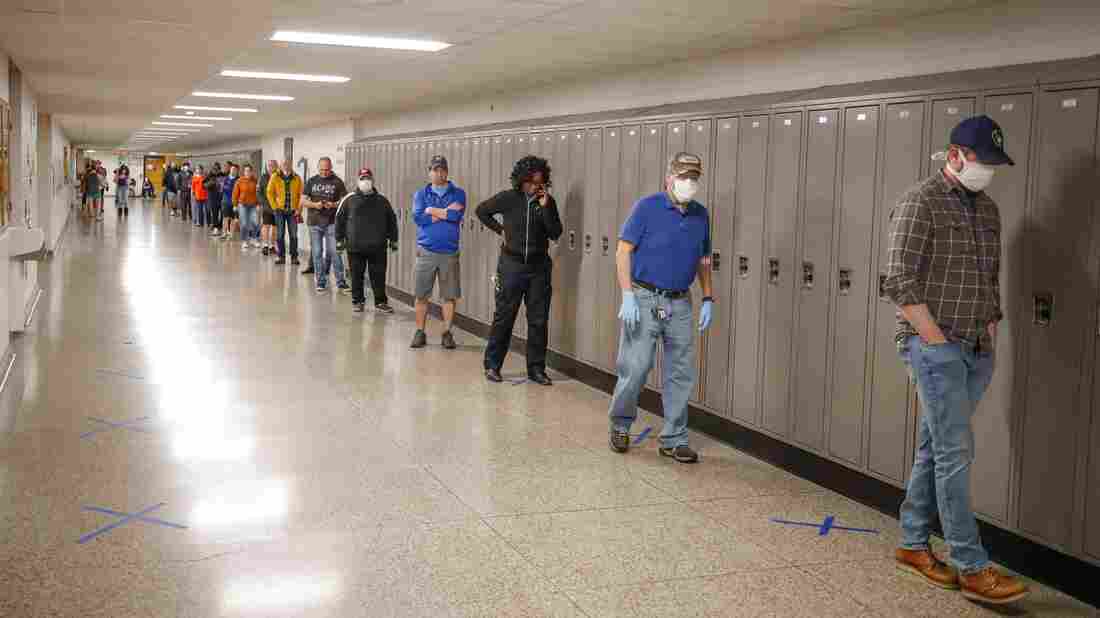 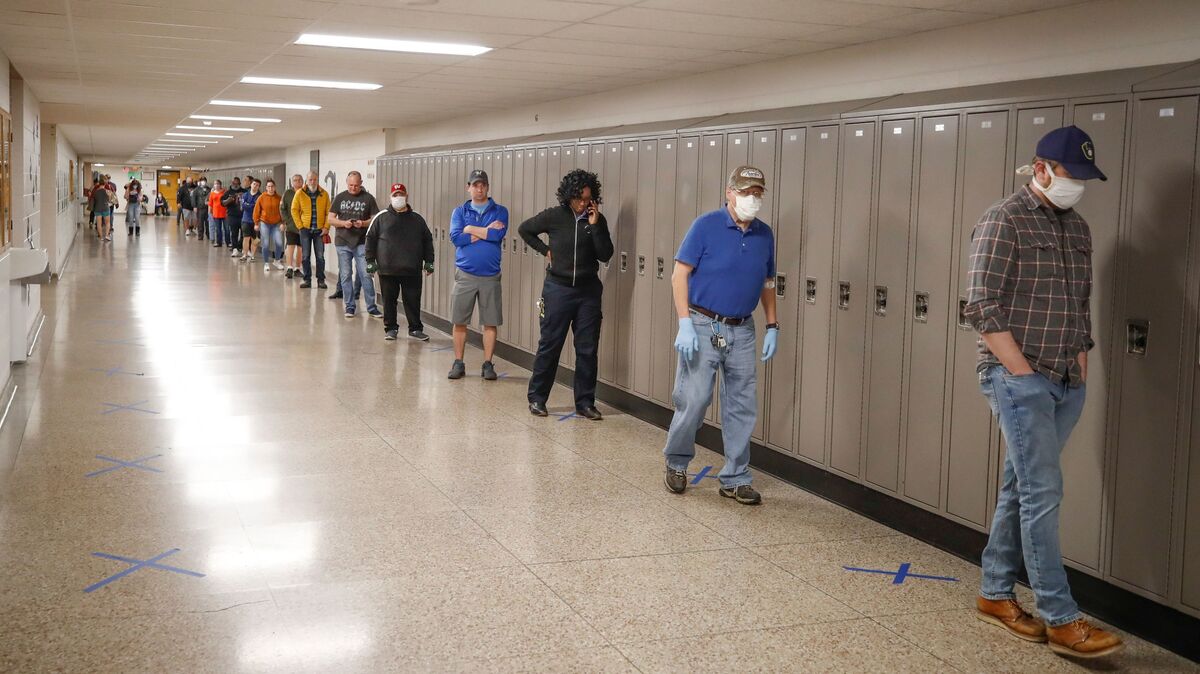 People wait in line to vote at Hamilton High School in Milwaukee.

"I'm not comfortable, but I feel like it's my obligation. So I'm doing it," said Patty Fitzpatrick, chief election inspector for the city of Rhinelander in northern Wisconsin.

More than half of the regular poll workers in Rhinelander chose not to work Tuesday.

Fitzpatrick, who is 70 years old, described herself as high risk for catching the virus and said she plans to remain in self-isolation for two weeks after Tuesday.

"For me personally, I feel like it's counterintuitive when we are asked to stay at home ... yet our legislature thinks it's all right to have a room full of 20 or so people voting," Fitzpatrick said.

Rhinelander City Clerk Val Foley agreed that the election should have been delayed, but felt resigned to see it through, based on the court's decision.

"I was hoping that it maybe would be postponed until the peak of this coronavirus was over, just for the sake of health," Foley said. "But at this point, let's just get it done."

For more on what Wisconsin's primary means for the Democratic presidential primary, check out our FAQ here.