Accessibility links
Coronavirus Task Force Briefing: Health Experts Show Cautious Optimism President Trump and congressional Democrats are haggling over the size of the next bill designed to help Americans through the crisis. 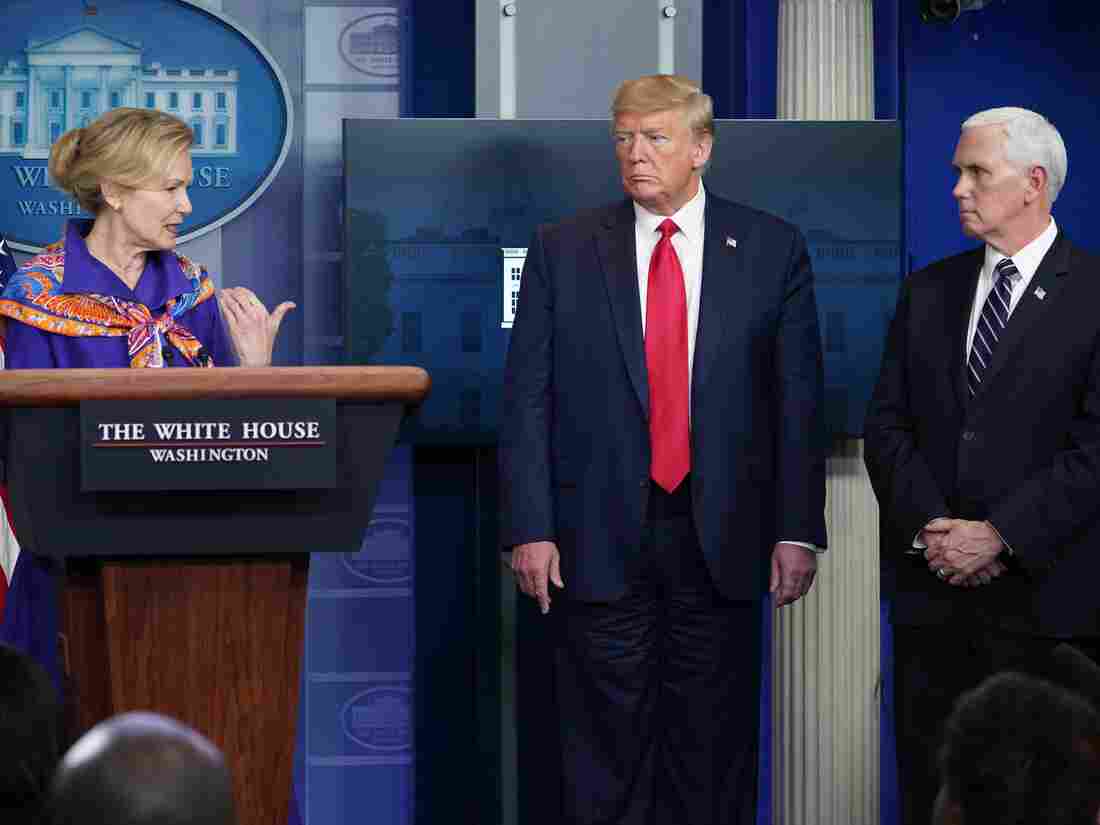 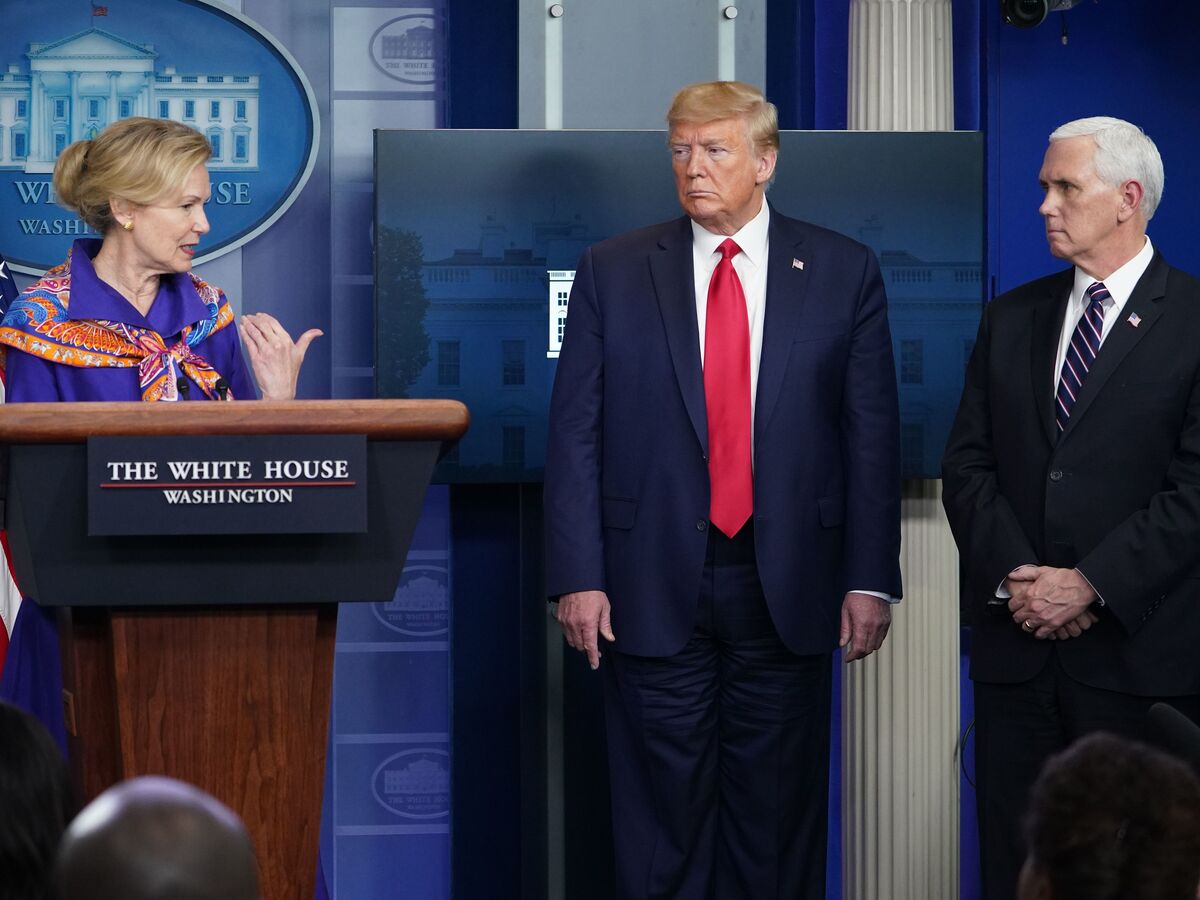 President Trump and congressional Democrats appeared to have a ways to go on Wednesday before they could agree on details for more relief spending for the coronavirus disaster.

Millions of Americans didn't pay their rent last week, according to new statistics, and forecasts suggest that those shortfalls could deepen as the economy seizes up amid drastic countermeasures aimed at slowing the spread of the virus.

Against that backdrop, President Trump and congressional Democrats are haggling over the size of the next bill designed to help Americans through the crisis while many of them cannot work.

Trump said on Tuesday that he intended to ask Congress for another $250 billion for payroll assistance. House Speaker Nancy Pelosi and Senate Minority Leader Chuck Schumer responded on Wednesday by asking for double that.

There appears to be broad agreement in Washington about the need for more payroll relief and, potentially, still more relief legislation down the line. Trump and congressional leaders all have said generally that they either definitively want that or are open to the prospect.

The big questions now, however, are how much Washington may add to the trillions of dollars it has authorized and when Americans may be able to get that cash in hand.

Trump also continues to spar with some governors over the administration's response, despite insisting they have good relationships. Republican Gov. Chris Sununu of New Hampshire tweeted his frustration Wednesday at not receiving enough cartridges to fully use the state's new rapid-testing devices.

Public health officials advising the White House said Wednesday they were cautiously hopeful that the United States may undershoot the worst-case predictions for deaths from the coronavirus.

Dr. Deborah Birx, a top physician coordinating the pandemic response, said on Wednesday that she hopes that rather than a peak of 100,000 deaths or more, social distancing and other countermeasures may bring a total closer to around 60,000.

Birx, Trump and their compatriots stressed that the outcomes depend upon Americans adopting and sustaining the mitigation measures recommended by the Centers for Disease Control and Prevention — staying home, avoiding groups of more than 10, washing hands, wearing masks outside and so forth.

"We are still in awe, really, of the American peoples' strength in this — and following through," Birx said.

Even as the daily death toll from the pandemic continues to mount and the number of cases appears to stabilize in some places, Birx and her colleagues said they believe the mitigation is working and so the nation must keep it up.

"What has been so remarkable to those of us in the scientific field for so long is how important behavioral change is — and how amazing Americans are in adapting to and following through on these behavior changes," Birx said.

Another top physician advising the White House, Dr. Anthony Fauci, faulted the spreading of conspiracy theories and falsehoods about the coronavirus.

Misinformation about the pandemic has been rife both from foreign sources and among Americans; Fauci and Birx were asked specifically about questions involving the death toll — whether it might be inflated because deaths of people with preexisting conditions might be counted as COVID-19 even though there were earlier illnesses or problems too.

"Those underlying conditions did not cause their acute death when related to COVID," she said. Birx repeated a warning that the elderly and those with weak immune systems and other such conditions must be especially careful not to become infected because they tend to become sicker and die in greater numbers.

Public health emergencies often are accompanied by untruths, Fauci said, referring back to his own experience with the falsehoods spread about HIV and AIDS when they appeared in the 1980s.

"They are nothing but distractions," Fauci said. "I can assure you we have so much to do to protect the health and welfare of the American people I would just hope we put that conspiracy stuff aside — let somebody write a book about it later but not now."

With more than 400,000 confirmed cases of the coronavirus in the United States and more than 13,000 deaths, Trump repeated his complaints on Wednesday about the World Health Organization and renewed his threats to cut off American funding for it.

Trump criticized the WHO on Tuesday for having a "China-centric" bias and was seemingly frustrated by the organization's lack of support for his decision at the end of January to limit some travel from China.

"They really — they missed the call. They could have called it months earlier. They would have known, and they should have known. And they probably did know, so we'll be looking into that very carefully," Trump said.

Tedros Adhanom Ghebreyesus, director-general of the WHO, urged political leaders on Wednesday to stop politicizing the pandemic.

Trump and Secretary of State Mike Pompeo, who appeared at the briefing on Wednesday, stopped short of calling for Tedros' ouster.

"This is not the time to be doing that kind of change ... there'll be a lot of time to look back and see how the World Health Organization performed," Pompeo said.

Pompeo said the State Department has helped bring more than 50,000 Americans home from overseas amidst the travel restrictions and complications associated with the pandemic.

Those people ranged from business travelers to vacationers who thought they were on the "trip of a lifetime," he said.

One group included about 800 resident Americans and the entire State Department diplomatic mission posted in Wuhan, China, the epicenter of the outbreak.

Pompeo repeated his criticism of what he called the obfuscation by Chinese authorities about the nature of the disease and China's own numbers of cases and deaths — but he also stopped short of saying he thought the United States or the world should try to punish Beijing.

That's an idea that a few hawks have bandied about; although the secretary of state didn't pick up that baton on Wednesday he suggested there could be a time for a reckoning down the line.

"This is not the time for retribution ... but it is still the time for clarity and transparency," Pompeo said. "Every country, China included, needs to be transparent about what's gone on in their country ... we'll leave for another time to evaluate how everyone did with that."