Accessibility links
Author Casey Schwartz Went Looking For 'Attention' In All The Wrong Places Casey Schwartz writes of her reliance on Adderall and her realization that the focus it brought was not genuine. But she leaves readers wanting to hear more on the relationship of attention and love.

In An Age Of Screens, Looking For 'Attention' In All The Wrong Places

In An Age Of Screens, Looking For 'Attention' In All The Wrong Places 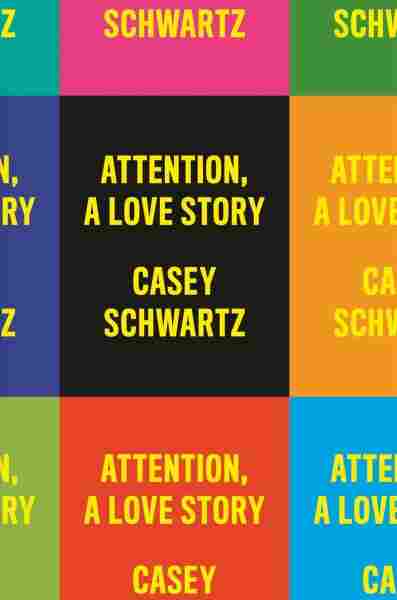 "This story begins with the Adderall," opens Casey Schwartz's Attention: A Love Story. In 2000, Schwartz was in college, struggling to write an essay, when a friend offered her a pill "the deep bright blue of a cartoon sky" and her hand "shot out to receive it."

Here already are the seeds of what is coming: It is not "Adderall" but "the Adderall," not the serviceable "take" or "grab" but the sacramental "receive."

Schwartz fell in love. Adderall was "attention weaponized, slashing through procrastination and self-doubt, returning me to a place that felt almost like childhood, with its unclouded pleasures of rapt hours, lost in books and imagination. Childhood, but with a jittery amphetamine edge."

But over the decade that she relies on Adderall — a combination of amphetamine and dextroamphetamine usually prescribed for attention deficit hyperactivity disorder — she comes to realize that this was ersatz attention. Real attention — expansive, fluid, generous — was located somewhere else. "Adderall does nothing to enhance my ability to absorb the world, to intuit the essence, to ... imagine my way out of my own little predicament and into someone else's," she writes. "On the contrary, Adderall directly impedes these very goals, erecting tight walls around me, boxing me into smallness, and causing me, again and again, to entirely miss the point."

Attention: A Love Story is Schwartz's quest for the point. It is an often lucid, sometimes hazy memoir-cum-meditation on the idea of attention. The sections on Adderall are undeniably the best. Here, Schwartz writes confidingly, precisely, of how it made her "the steely, undistractible person whom I vastly preferred to the lazier, glitchier person I secretly knew my actual self to be."

After Adderall, Schwartz turns to Silicon Valley's cynical battle for our attention. "[I]t does not escape me," she writes, "that just as Adderall was surging onto the market in the 1990s, so was the World Wide Web, that the two have ascended in American life in perfect lockstep, like a disease and a cure, made for each other." Schwartz (who is also the author of 2015's In the Mind Fields) goes on to consider various prophets and poets of attention, including David Foster Wallace, William James and Simone Weil.

Several chapters have the feel of half-finished thoughts, two in particular: a cautious, even prim, section on mind-altering drugs and a chapter on Schwartz's father, the longtime broadcaster Jonathan Schwartz, who was fired by NPR member station WNYC in 2017 due to allegations of inappropriate behavior. In this account, Schwartz implies that her father was a victim of Twitter-addled attention spans, which determine guilt in online lightning trials and then move on. That might be true, but since he signed a nondisclosure agreement in a settlement with the station, we are never told what, precisely, he did. So the late, lamented nuance is not found here, either.

I couldn't help but feel that what fails Schwartz is, in fact, her sustained attention. On a sentence level, Schwartz is brilliant, funny and clear, but she lacks the larger thematic clarity of, for instance, Jenny Odell's recent book, How to Do Nothing: Resisting the Attention Economy. Where Schwartz poses questions and then retreats, Odell makes a sweeping, convincing case that the problem of attention is related to other ills: the decline of organized labor, the ravage of the Earth and the scourge of gentrification. For Odell, "[A]ttention forms the ground not just for love, but for ethics."

But back to love, for a moment. Often, when I pick up my phone, I think of a scene in the TV series Fleabag in which the protagonist looks at her phone and her brother-in-law snaps, "Stop checking, all right? Nobody loves you." I love this line for how precisely and cruelly it identifies the question we are asking when we pick up our phones: Who loves me?

Schwartz's book is subtitled A Love Story, but one aspect hinted at, but not substantially addressed, is the role of attention in love. It's not a coincidence that attention and tender come from the same ancient common ancestor, a Proto-Indo-European word that means "to stretch." (I picture plants stretching toward sunlight.) Every important element of love — communication, fidelity, sex — is about sustained, sometimes effortful, nonutilitarian attention to someone else. There is a moment in Jane Austen's Sense and Sensibility where teenage Marianne is playing the piano, watched by the man who is in love with her. When she finishes, the other people in the room, distractible, noisy, half-listening, rush to praise her, but he pays her "only the compliment of attention." And that, it turns out, is everything.

Read an excerpt of Attention