Accessibility links
Michael Arceneaux's 'I Don't Want To Die Poor' Maintains Sense Of Humor Amid Stories Of Struggle Making Michael Arceneaux's book required reading in high schools would help a lot of young people think twice about the promise that going to college is the only path to upward social mobility. 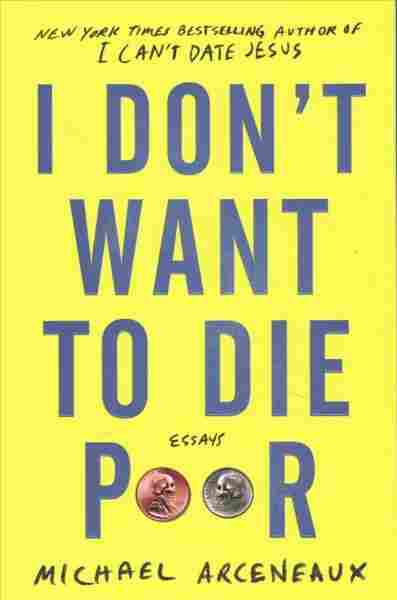 I Don't Want to Die Poor

Making Michael Arceneaux's I Don't Want to Die Poor required reading in high schools across the country would help a lot of young people think twice about the promise that going to college at any cost is the only path to upward social mobility.

Arceneaux, also the author of I Can't Date Jesus, writes in his new book of essays:

"The student loan industry is a barely regulated, predatory system, and with Donald Trump in the White House and those equally useless people in Congress, oversight of the industry is becoming nonexistent."

The truths come hard and fast in I Don't Want to Die Poor. Arceneaux uses the first essay, titled "You Self-Centered Bastard," to bluntly show readers one of the issues in his life that will serve as an element of cohesion throughout the collection: student loans. The essay also serves to set the tone for what follows — a lot of personal stuff, great insights full of sarcasm and humor, and a relationship with popular culture that permeates everything the author does.

Arceneaux doesn't shy away from any topic, and this book offers readers a look into his past, his financial woes, his sexuality and love life, the harsh realities of freelancing (yes, I sighed when I wrote that), racism, his mother's constant battle to stay afloat, his father's alcoholism and his own struggles with an eating disorder. Throughout all of it, he retains a dark sense of humor and the idea that there is something better out there, something he will achieve through hard work.

Many Can Identify With Arceneaux's Book: 'I Don't Want To Die Poor'

The thing that makes I Don't Want to Die Poor an outstanding read is Arceneaux's voice. He writes like he's telling you, his friend, a story. That makes you want to spend more time with him, listening to his stories and marveling at the way people can share so much simply because demographic factors put you in the same situations. For Arceneaux, life hasn't been easy, and his writing shows that. Luckily for readers, every painful detail he shares is balanced out by a superb critique, a masterful turn of phrase, a funny use of popular culture or a couple of sentences that cut to the bone of a social issue and expose the core of it with unbending honesty:

"It's adorable to believe we live in a meritocracy, but so much of certain types of success is dictated by everything else besides perceived special talents and abilities. It's about privilege, and how that privilege gives way to greater access and larger means than are offered those who lack it."

Arceneaux's sincerity shines here. So does his style. He captures readers in one essay when discussing how his eating disorder stemmed from his "desire to feel as if I was in control of some aspect of my life." In another, he explains how "queer people have to deal with the reality that our straight counterparts have experiences in their teens and twenties that many of us don't get to have until much later in life." However, and more importantly, he will show from time to time that he writes to get a point across and isn't here to please anyone. For example, when he talks about the time he thought about being a rapper, he deconstructs hip-hop to unmask its homophobia. His words aren't gentle: "I forgot I can't be a n**ga in hip-hop because I'm a f**got."

Heartbreaking, hilarious, unapologetic and smart, this collection of essays shows a talented young voice that can attack racist nonsense while discussing The Real Housewives of Atlanta. It's also a warning to future generations and a literary hug to those who have fallen into the unforgiving claws of student loan debt.