Accessibility links
Review: 'Resident Evil 3: Nemesis' Remake Capcom's remake of its classic 1999 survival horror game is gorgeous — taking full advantage of new technologies not available then. But it suffers from more muted scares and a lack of replayability. 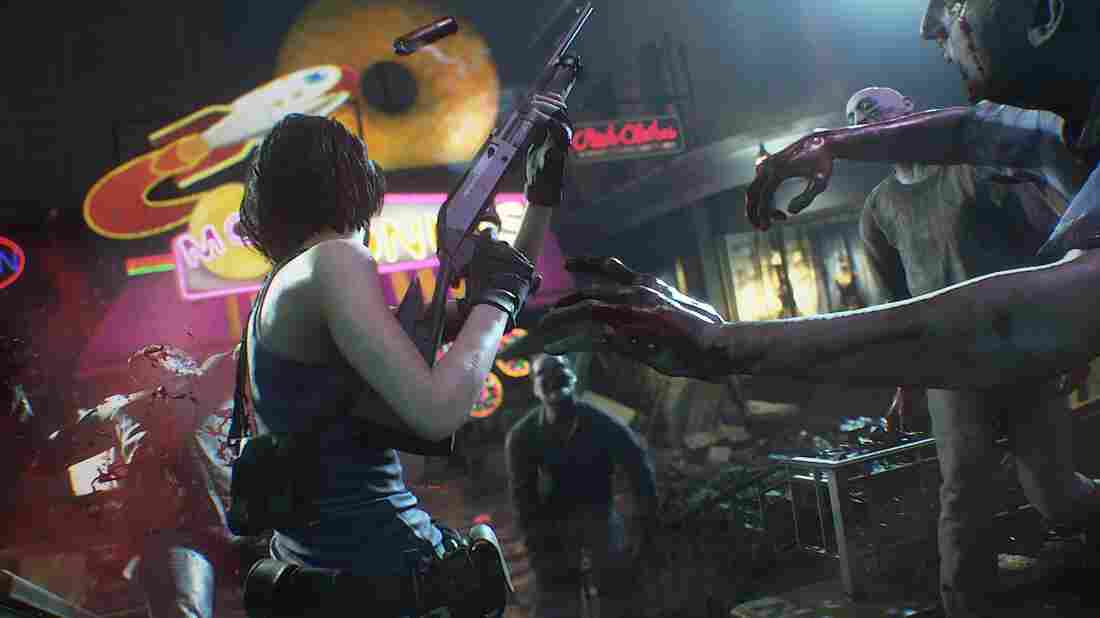 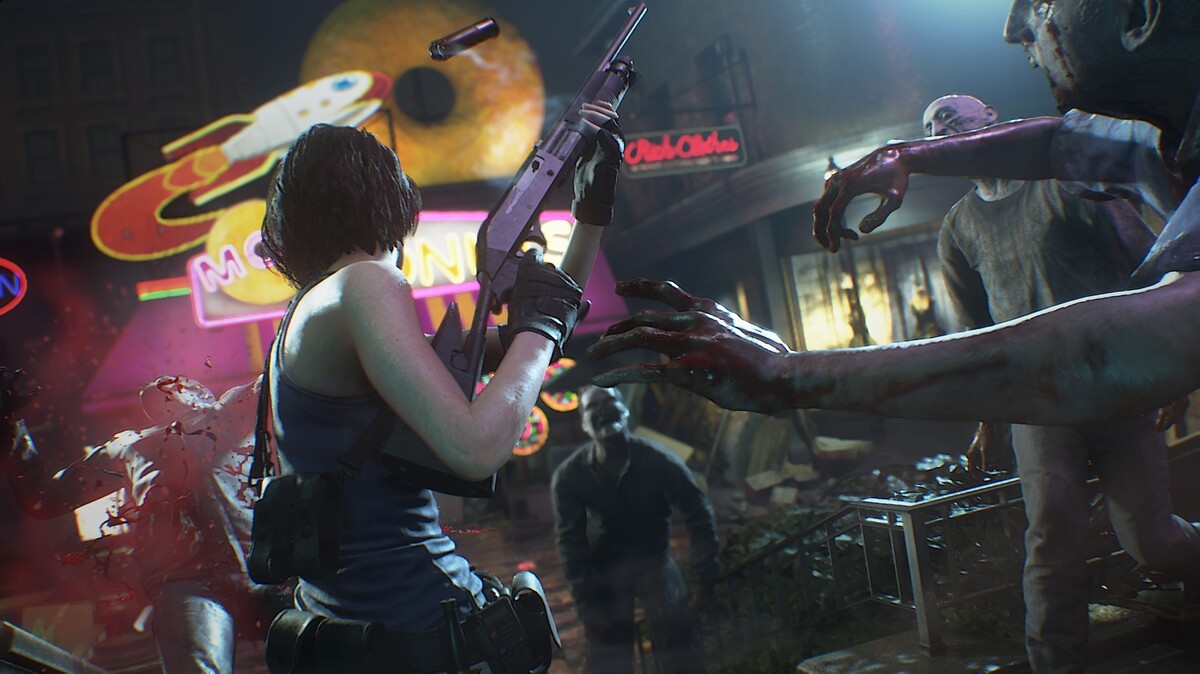 "Supercop" Jill Valentine is back battling the undead in the new remake of Capcom's Resident Evil 3: Nemesis.

The new remake of Resident Evil 3: Nemesis begins with a literal bang. A giant, monstrous bioweapon named Nemesis crashes through the walls of my apartment, knocking me to the ground. My little handgun is useless against him. His goal? To kill me. And he'll relentlessly chase me through the streets of Raccoon City to do it.

After taking the first of many batterings, I escape, and I'm limping through a dark alleyway. Just ahead of me there are crowds of people sprinting through the trashed city streets, fleeing the zombies that have taken control. I hear only the sounds of endless sirens, water spraying from a busted fire hydrant, and screaming. This is just the beginning — and I'm already tense.

Game maker Capcom coined the term "survival horror" after the release of the first Resident Evil, for Sony's then-new PlayStation in 1996. The genre became known for its maze-like maps, puzzles, limited (and sometimes absent) ability to fight back and heal, and little inventory space — meaning players had to run away from monsters more often than fight them.

That changed a little with the original RE3 in 1999, which allowed players to fight back more without ever feeling too in control. Now, 20 years later — and following last year's widely-praised remake of Resident Evil 2 — it's been completely remade and reimagined.

The bare bones of the game remain the same: Raccoon City is overwhelmed by an outbreak of a disease called the T-virus, which turns everyone it infects into a zombie. You're playing most of the game as "Supercop" Jill Valentine, as she desperately tries to survive and escape the infested city — while our friend Nemesis stalks close behind.

Jill is a member of the Special Tactics and Rescue Service team (S.T.A.R.S), an elite law enforcement team at the Raccoon Police Department. S.T.A.R.S. was investigating the source of the T-virus, and traced it back to a politically powerful company called Umbrella Pharmaceuticals.

This is a long, complicated story that spans multiple games. But to sum it up without spoilers: Umbrella is super evil. And they really want to destroy all evidence of their involvement in the T-virus outbreak. Jill and her surviving teammates at S.T.A.R.S are a smidge of an inconvenience, so Umbrella has created our stalker Nemesis to kill off all the remaining S.T.A.R.S and cover up their tracks. 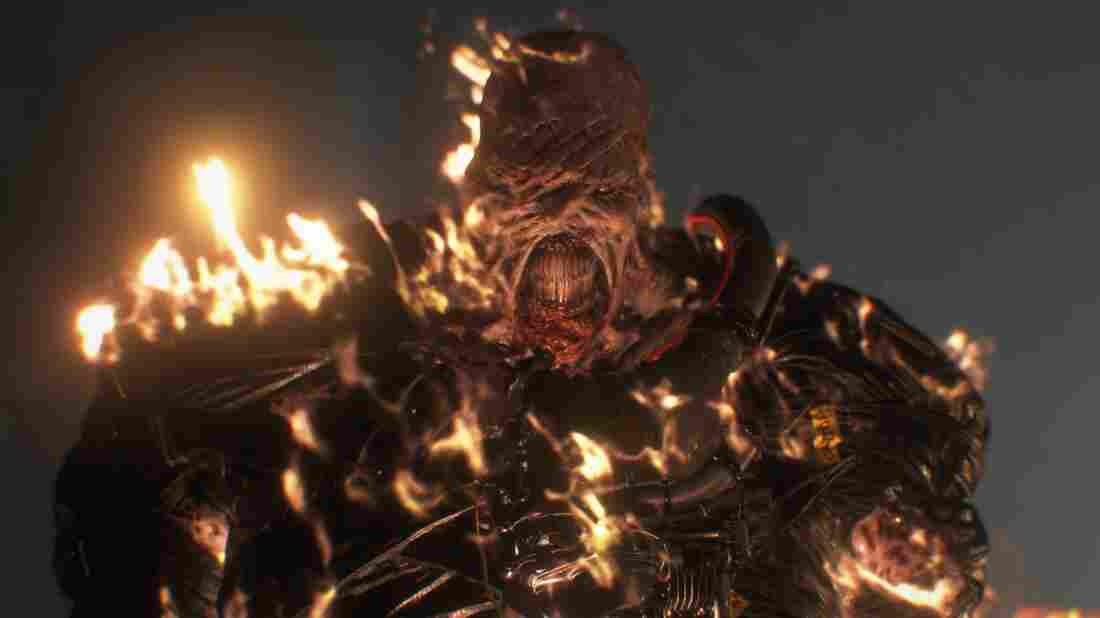 Nemesis is the terrifying bioweapon the evil Umbrella Corporation sends after Jill and her team. Capcom USA hide caption 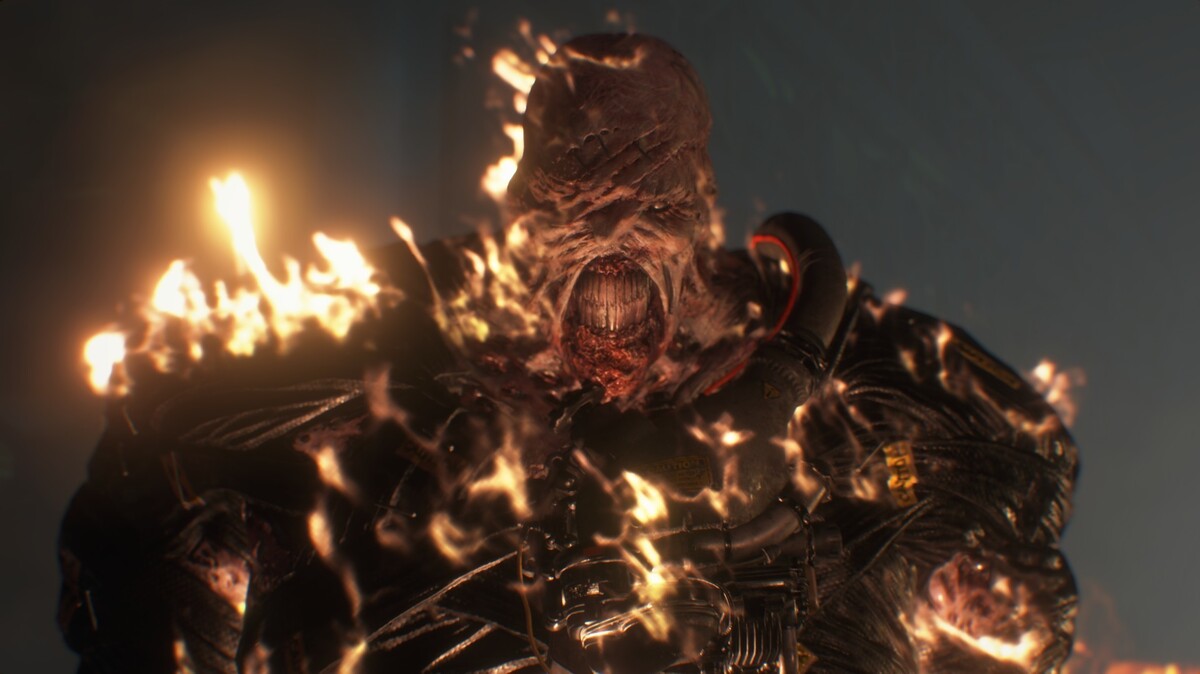 Nemesis is the terrifying bioweapon the evil Umbrella Corporation sends after Jill and her team.

But other than the absolute basics, nearly everything else changed in the remade Resident Evil 3. The game obviously looks more beautiful with modern graphics — and the awful movement controls got replaced with a system more instinctive to today's gamers. This makes it much easier to play the remake than the original.

And the new layers of detail mean we get to know the characters better than ever — we see the psychological impact the zombie apocalypse has had on Jill through her nightmares, and the way she falls asleep at her desk, exhausted by her investigation. And any time she takes a gun from a dead zombie or drags one out of a car so she can drive it, she apologizes.

The new 'Resident Evil 3' is an entertaining horror experience. It hooks you into the story quicker than the original and is very welcoming to new players.

The new Resident Evil 3 is an entertaining horror experience. It hooks you into the story quicker than the original and is very welcoming to new players. But there are tons of changes from the original — characters, monsters, puzzles, locations, and plot points have all been altered, or in some cases removed. And a lot of the changes make things less scary.

Like previous games in the series, the original RE3 used fixed camera angles. That meant you were navigating Jill from a third-person perspective through an environment you could only see from one angle — which made sense with the technical limitations of the first PlayStation but became outdated as technology became more advanced. For the next game in the series, Capcom permanently switched to a more popular over-the-shoulder perspective, where the camera remains fixed on the character.

But those fixed camera angles made the original RE3 pee-your-pants scary. Other than audio cues, you never knew if a zombie was hiding around a corner, ready to lunge at you and chase you back down the hall. The remake hides its enemies in the darkness, or behind objects in the room, but its zombies are nowhere near as terrifying as when they were waiting to jump you off-screen.

The original game also ratcheted up the tension through its save system. Players had a limited amount of ink ribbons they could use to save their progress whenever they found a typewriter, and the threat of getting killed and losing a lot of progress really upped the stakes. In easy mode, you got unlimited saves.

But now, you have unlimited saves on all difficulty levels (though your number of saves does impact your final grade at the end of the game). You never lose too much progress when you die, which makes surviving every encounter a little less critical.

And one big feature missing from the remake is branching story paths. Like other games in the series, the first RE3 presented players with choices that altered the story and the ending. That meant that even though the game was only six hours long, you could replay it until you'd experienced all the story paths and endings. But you see everything the remake has to offer after one playthrough, and that lack of replayability makes it hard to justify the $60 purchase price.

There is a reason to keep playing for fans that want a challenge — if you defeat hardcore mode, then you unlock two even tougher difficulties. And despite its shortcomings, it's still a good game; it brings realism and life to a story previously told with limited, 20-year-old technology.

But for what you get, I'd wait until it's on sale — unless you really love Resident Evil.

Kaity Kline is a columnist for NPR's Join the Game and a producer on 1A. She is a native of New Jersey, a lifelong gamer, and a former gaming YouTuber. She tweets at @kaitykline.