Accessibility links
U.S. Aircraft Carrier Fleet Hit By Growing Number Of COVID-19 Cases Three of the U.S. Navy's 11 aircraft carriers are reported to have sailors infected with the coronavirus. The Pentagon says readiness has not been affected, but more outbreaks are expected. 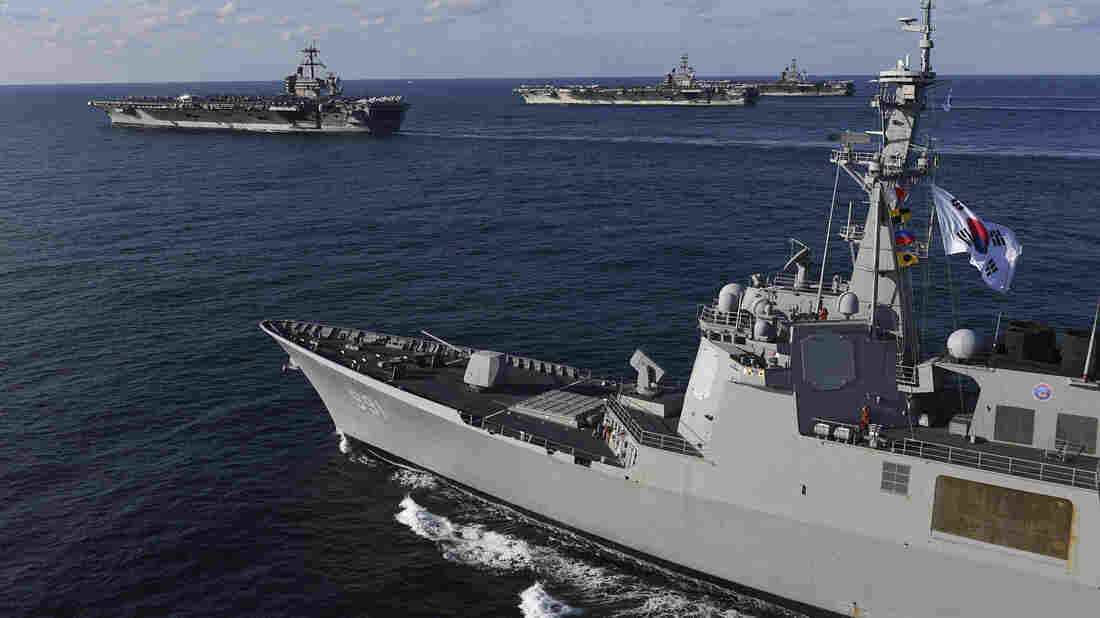 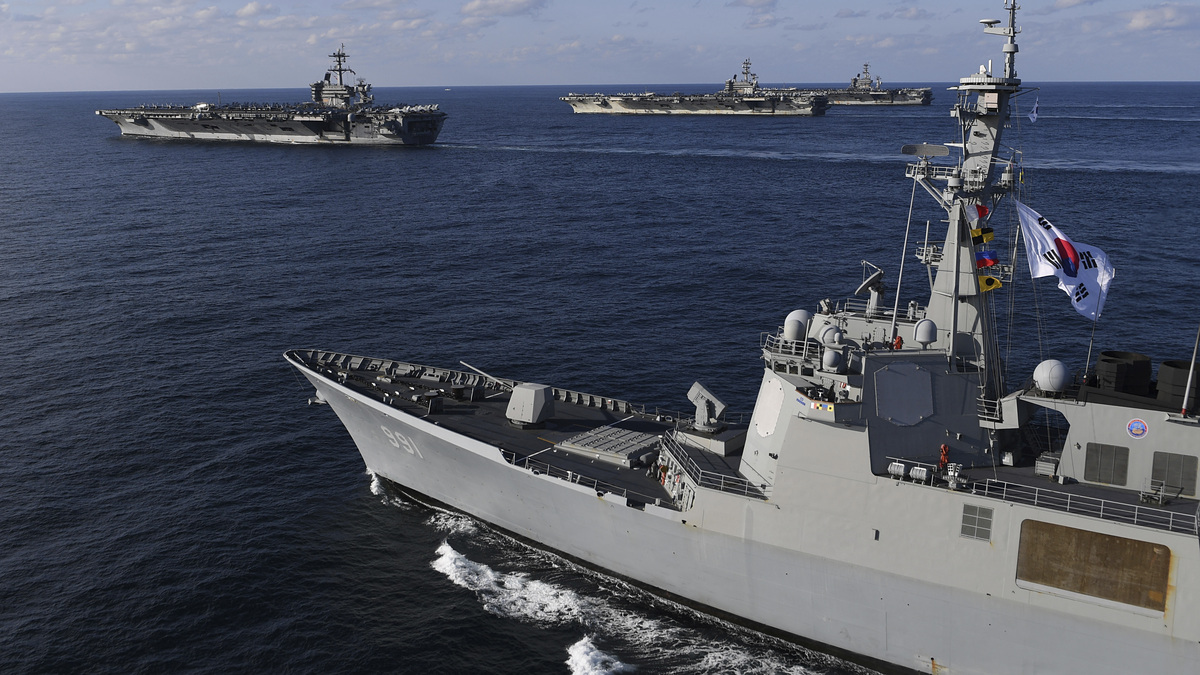 Amid growing concerns about military readiness, a sailor from the coronavirus-sidelined aircraft carrier USS Theodore Roosevelt became the first crew member to be hospitalized in intensive care in Guam Thursday. He is one of more than 400 of the ship's sailors who have tested positive for COVID-19.

"I guess deep down I was hoping that we would never get to the point. I was hoping that the numbers would be zero at the end of this," Gen. John Hyten, vice chairman of the Joint Chiefs of Staff, said of the sick sailor at a Pentagon news briefing Thursday. "But that's just not going to be the case with coronavirus."

Hyten said with almost all of the Roosevelt's crew of 4,865 now tested, 416 tested positive — nearly 9% — and 3,170 tested negative, while the results for another 1,164 were still pending. Of those testing positive, he said 229 — more than half — showed no symptoms of the disease.

Following the leaking to the press of an impassioned plea emailed to his superiors for a faster response, the Roosevelt's skipper, Capt. Brett Crozier, was removed from his command last week by then-Acting Navy Secretary Thomas Modly. The Navy's top civilian in turn resigned Tuesday after remarks he made calling Crozier "naive" and "stupid" became public and were widely criticized.

Although Crozier had called for removing 90% of the Roosevelt's crew, only 2,700 sailors — 56% — had disembarked from the ship in Guam by Thursday. Navy officials have said the remaining crew members were needed on board to maintain the Roosevelt's two nuclear reactors and sanitize its cramped living quarters.

With 11 aircraft carriers in the U.S. Navy's fleet, the Roosevelt is one of three with crew members reported to have been infected with the coronavirus. The only other American aircraft carrier currently in the western Pacific — where the U.S. uses such vessels to project military might and counter potential hostilities from China or North Korea — is the USS Ronald Reagan, docked in Yokosuka, Japan.

Although the Pentagon late last month stopped identifying the locations of active duty service members infected with the coronavirus, crew members are reported to have tested positive for COVID-19 on the Ronald Reagan as well as on the USS Nimitz. That aircraft carrier — the oldest of the fleet — is currently docked in Bremerton, Wash., and has had its deployment to the Pacific delayed by a two-week quarantine of its crew.

Hyten acknowledged that many of the Nimitz's crew have remained aboard the aircraft carrier. "They've been kind of, I'll say, isolated on the ship, getting ready to go, and there's been a very small number of breakouts on the Nimitz and we're watching that very closely before the Nimitz goes out," he said. "But it's not a huge breakout; it's not a big spike at this point. There's been physical separation of sailors on that ship."

A spokesman for the U.S. 3rd Fleet later disputed Hyten's description of health conditions on the Nimitz, telling The Kitsap Sun that a sailor showing symptoms had been placed in isolation off the ship out of an abundance of caution and that a test for the virus had been "inconclusive."

"Sailors that had been in close contact with the individual were also removed from the ship as a precaution and placed into quarantine," Cmdr. John Fage was quoted as telling the local newspaper. "That sailor remains off the ship."

Hyten said the Pentagon is still trying to figure out how to quarantine ships with large crews before they set sail.

"It's not a good idea to think that the Teddy Roosevelt is a one-of-a-kind issue," Hyten, the Pentagon's number two uniformed official, said. "We have too many ships at sea. We have too many deployed capabilities. There's 5,000 sailors on a nuclear powered aircraft carrier. To think that it will never happen again is not a good way to plan."

An ongoing concern for the Navy is the possibility of coronavirus infection occurring during port calls made by deployed U.S. warships, such as the one the Roosevelt made in Da Nang, Vietnam, last month.

The only American aircraft carrier currently deployed to the Middle East is the USS Eisenhower, which left its home port of Norfolk on Jan. 17. In the 12 weeks since then, the ship has made no port calls.

Pentagon officials insist that despite orders halting travel for military personnel, suspended training exercises, and no new recruits being shipped to boot camp, the U.S. military's overall readiness has not been affected by the coronavirus pandemic.

"To those who wish us harm, make no mistake: even with the challenges that this disease has brought to our shores, the Department of Defense stands ready to meet any threat and defend our nation," Deputy Defense Secretary David Norquist said at the same Thursday Pentagon briefing. "If our adversaries think this is our moment of weakness, they are dangerously wrong."

Hyten, for his part, sounded a note of caution.

"The Theodore Roosevelt would have been coming off their port call in Guam and back out to sea now under the normal schedule," he noted, "so there is a degradation [of readiness] there in the Pacific, so we have to watch that very closely."