Accessibility links
Video Game 'Bloodborne' Forges Connections During Quarantine A five-year-old video game about coming together to battle a nightmarish plague of werewolves proves a surprising consolation during a real-world pandemic. 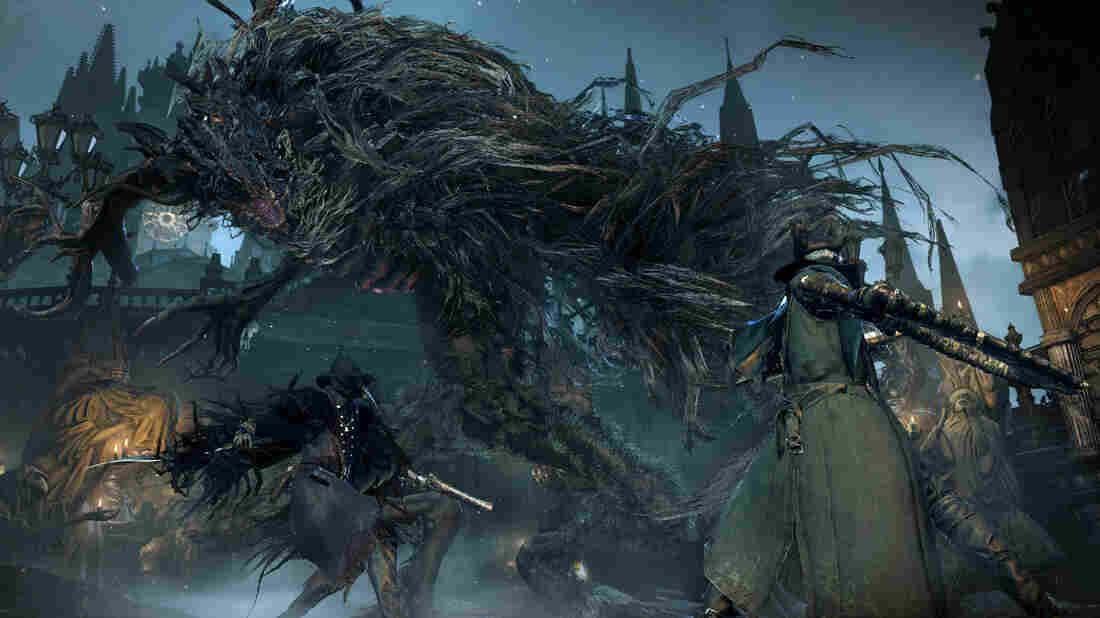 In Bloodborne, you battle a plague of monstrous werewolves — but who's really the monster? Sony Interactive Entertainment hide caption 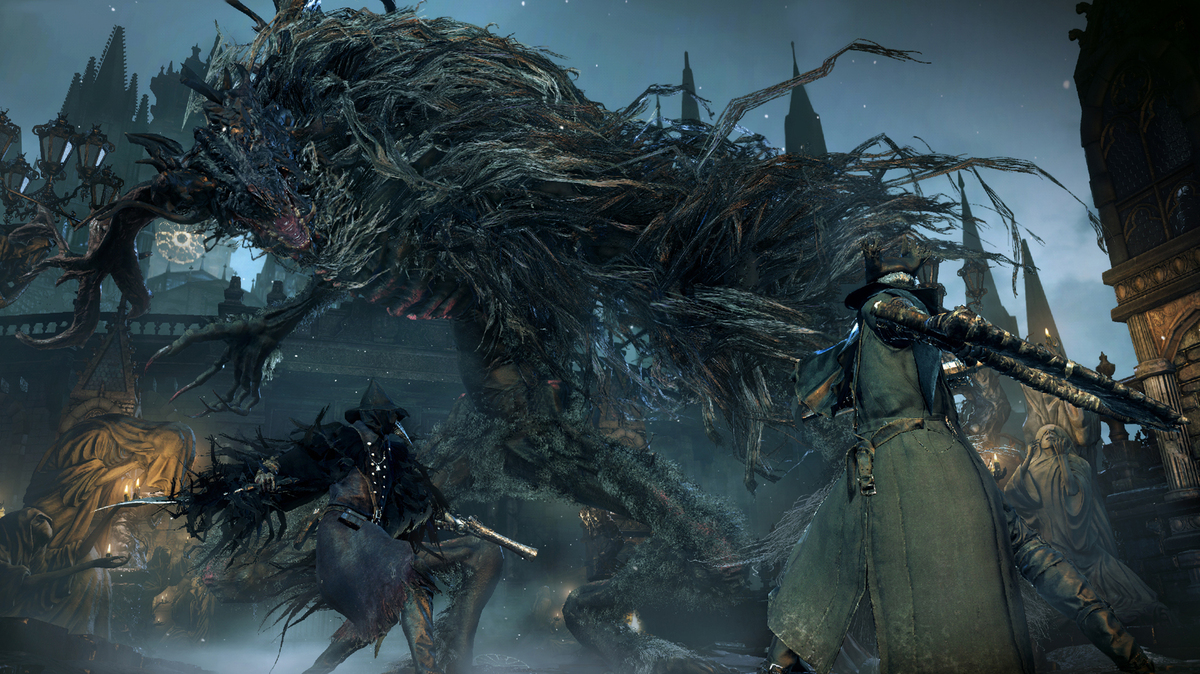 In Bloodborne, you battle a plague of monstrous werewolves — but who's really the monster?

I didn't expect a video game about a nightmarish plague to console me during a real-world pandemic, but Bloodborne has a history of surprising me.

I thought I'd take swimmingly to the 2015 action role-playing game. I had aced its spiritual forebears, Dark Souls and Dark Souls 2, and I even bought a new Playstation exclusively to play it — a reckless expense for a then-temp worker! But while I expected Bloodborne to be difficult, I didn't expect gatling guns to rip me apart from a distance; werewolves to savage me up close; and dogs — just plain dogs — to leap on me, goring me to death in seconds. That's not to mention the beings out of The Thing or The Fly. Masses of mutant snakes, moving as one, coughing toxins at me. Small blue creatures, crowned with delicate filaments, shocking me with arcane bolts. Most chilling of all: figures with enormous, bulbous heads spotted with eyes, walking towards me, singing, their distended arms drawing me in for a fatal embrace. All these monsters nearly drove me mad — but to my surprise, I was sad to say goodbye to them when I finished the game.

Now, huddled at home, keeping my social distance, I've returned to Bloodborne. A friend suggested I try it again — and, well, I guess I missed those monstrous scamps. I enter their world strapped to an operating table, injected with strange blood, equipped only with my wits and a charge to hunt beasts. A werewolf on all fours greets me as I stumble through the clinic and I'm delighted to see the familiar adversary. But I'm out of practice: It kills me — sending me to a surreal home base which offers respite and a burgeoning arsenal. I teleport back to the streets of Yarnham (think Victorian London, with far more serrated weapons) and eagerly commence my bloody work once more.

Here my grotesque escapism fully begins to resonate with reality. I notice that Yarnham's sane survivors have taken refuge behind closed doors — and while Bloodborne has nearly no exposition, I piece together a grim backstory from brief cinematics, obtuse notes, and snatches of dialogue. I knock on windows and the residents pity me, curse me, or laugh derisively at my plight to be out on the night of a hunt — a night that never seems to end. These people are in quarantine, and I'm the closest thing Yarnham has to a first responder.

Only this time, I'm not alone. My wife is also trapped at home with me, and I'll coax her to look at the TV screen for a particularly dreadful enemy or crucial plot point. And now that I'm employed full-time (luckily, still), I've shilled out for online cooperative play, something I did without my first time through. I can ring a Beckoning Bell to invite in other players — the game calls them "confederates" or "cooperators" — and together we roam the streets, slaying all in our path. 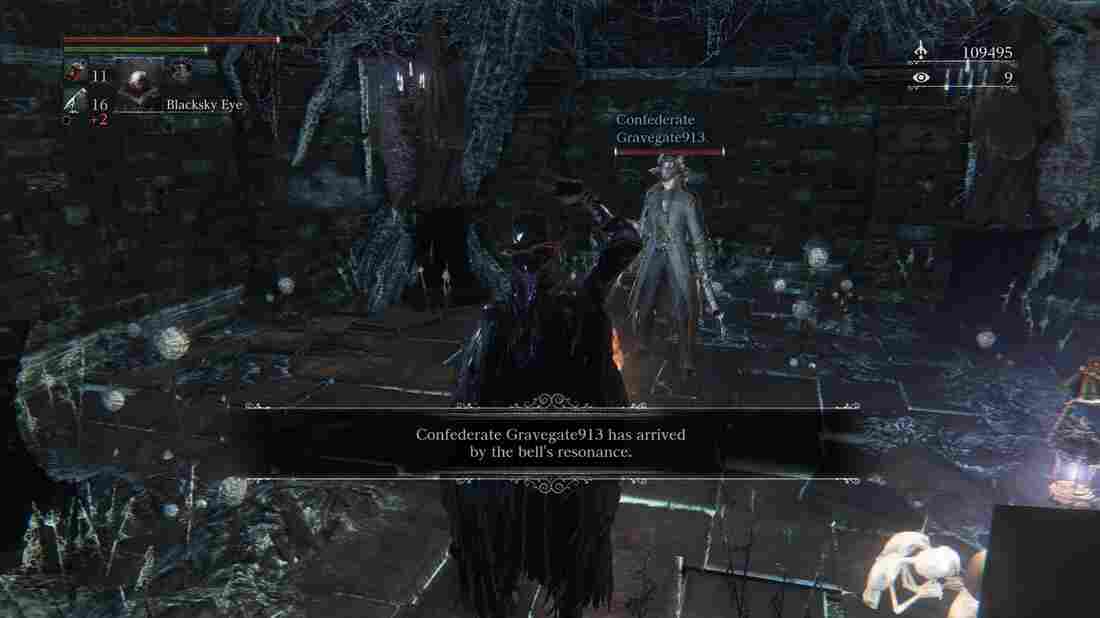 In Bloodborne, if you purchase online cooperative play, you can summon "Confederates" and "Cooperators" to assist you — but they can only communicate through gestures. James Mastromarino hide caption 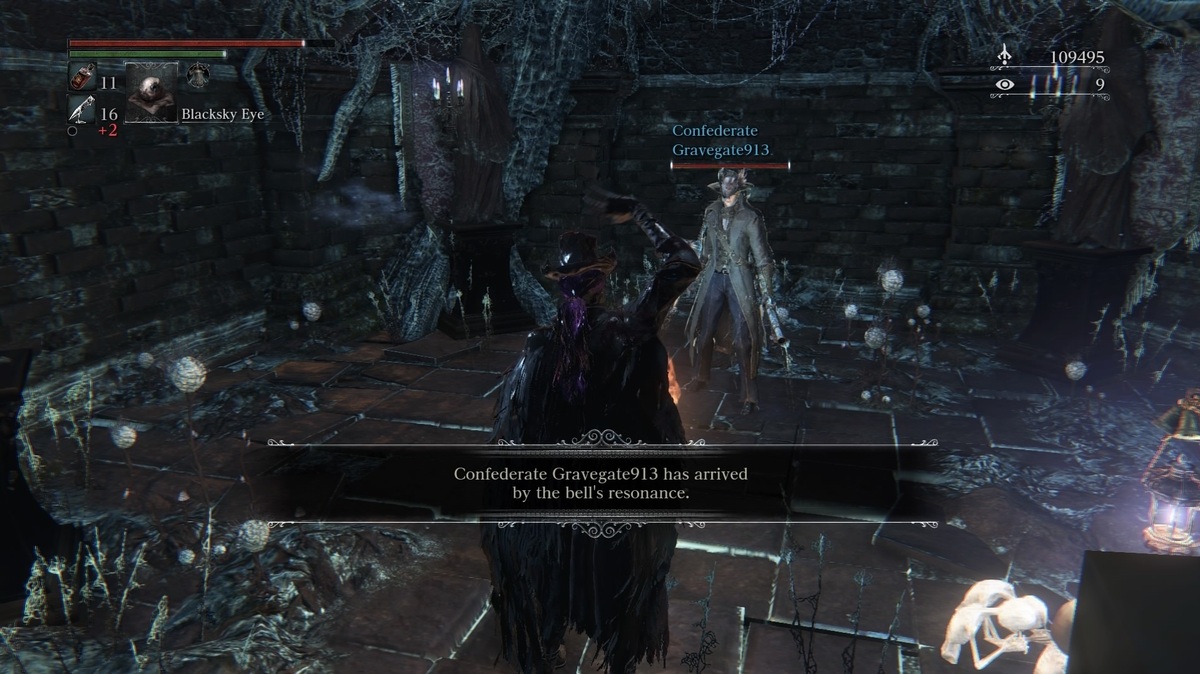 In Bloodborne, if you purchase online cooperative play, you can summon "Confederates" and "Cooperators" to assist you — but they can only communicate through gestures.

But while Bloodborne hooks me with its combat, it also slowly reveals a city ravaged by disease. One of the first shut-ins I meet mentions he came seeking a miraculous blood cure from Yarnham's "Healing Church." Yet the transfusions that made the church famous came with terrible side effects. Patients and even clerics turned into beasts, and the church called for hunters to stamp out bearers of the sickness — rather than stop the practices that caused it. In one heartbreaking chapter of the game, I find an old part of town still aflame from a purge. The werewolves that survived are protected by a hunter who forsook the job, choosing to defend them from the likes of, well, me.

Every time I boot up 'Bloodborne,' I know that fans everywhere, likely also trapped inside, are fighting the same fight with me. I just need to ring the Beckoning Bell to see them.

The more I excavate Bloodborne's setting, the more I can see it as a dark reflection of life in 2020. The real populace on Earth and in the fictional populace in Yarnham bide their time indoors, nerves fraying under the strain. Public health preparations in both worlds seem woefully inadequate. Churches in both worlds that once offered succor can instead spread disease. But at least Bloodborne's epidemic is more explicable. Yarnham doesn't face a random virus — its plague ultimately came from cosmic horrors (spoiler alert: the magic blood was alien blood all along). There's no sinister culprit behind COVID-19, unless you consider human shortsightedness as a kind of unseen evil (though I'm sure someone somewhere blames aliens, too). We can't stop the coronavirus with quicksilver bullets or saw-blades; the most someone like me can do to save lives is to stay at home.

But every time I boot up Bloodborne, I know that fans everywhere, likely also trapped inside, are fighting the same fight with me. I just need to ring the Beckoning Bell to see them. I ring the bell, and a shirtless stranger with flaming hair jumps into my game and makes mincemeat of a beast that's killed me countless times. I ring the bell; another (more soberly-dressed) stranger painstakingly guides me through a level, leading me to every item's hiding-place. I ring the bell; a stranger with a massive bow, archaic in a world with firearms, nevertheless makes quick work of a gigantic boss that shoots lasersout of its face. Bloodborne's story may be about humanity transformed into the abominable, but my experience playing it is often about the kindness of these strangers. And if we can pull together to beat virtual nightmares — then maybe, just maybe — we can pull together to beat the one in the real world too.

James Perkins Mastromarino is a producer for NPR and WBUR's Here & Now, an obsessive board gamer, and lover of all things arcane.