Accessibility links
'Raccoon Dog' Wandered Onto Army Base In Syria And Helped Center Soldier When Rumi wandered onto a military base in Syria, 1st Lt. Shelby Koontz took her in. She didn't want to abandon Rumi when her deployment ended, so Koontz used social media to find her a forever home. 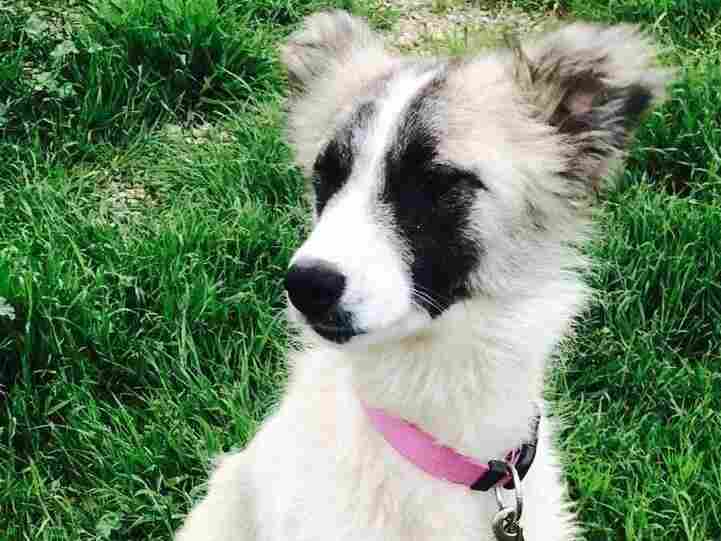 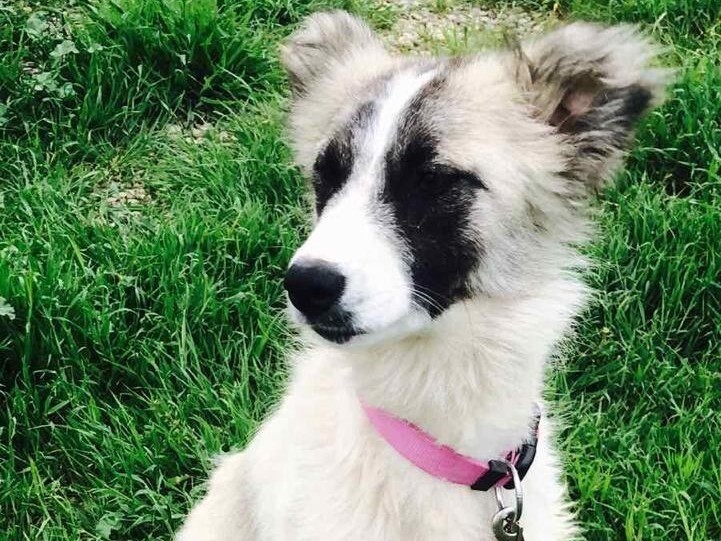 Rumi is currently in quarantine in Iraq, and under the care of the Puppy Rescue Mission, she's getting healthy to meet her adoptive family at Fort Bliss, Texas.

On a recent sunny morning at a remote U.S. base in northeast Syria, Rumi is sniffing around. She has white fur and black markings on her face. Some here call her "the raccoon dog."

Even though the dog didn't look pretty, 25-year-old Koontz immediately fell for her.

"You could tell she wanted to be around people," Koontz says. "She's very playful." Koontz says Rumi would see a group of soldiers going for a run, and she'd think, "Oh, I want to come too." Rumi would also follow soldiers when they were getting ready to go on patrol.

Soldiers' emotional well-being can be tested when deployed to a war zone — especially if it's their first experience.

The name Rumi is a play off one of the nearby towns. Koontz says that at the beginning the dog was curious though a bit skittish — the way abused dogs behave.

Animals are frowned upon on U.S. military bases. They can bring disease or cause problems with security — especially their barking. But Koontz's higher-ups gave her the green light to keep Rumi. She started feeding her every morning after overnight shifts as a fire support officer.

"She kind of struck a chord with me that she's just this adorable sweet dog in a war zone," Koontz says. "And she's cold and wet and alone."

Koontz is assigned to the 21st Infantry Division based in Alaska. Her deployment in Syria ends in May, though the current coronavirus pandemic may delay her return home. She felt it would be cruel to get Rumi used to being around people only to abandon her again.

"Just for the next unit to come in and kind of kick her out. I didn't like the thought of leaving her here," Koontz says.

She quickly got to work finding Rumi a forever home.

"Initially I posted a picture on Facebook just asking if anybody would be interested in adopting a dog from a war zone," Koontz says.

She warned that it wouldn't be easy caring for Rumi.

"The dog would need a lot of training," Koontz wrote.

To her surprise, a lot of people reached out wanting to take Rumi in.

"The response was overwhelming," Koontz says. The lieutenant says she felt a huge responsibility to find a caring, loving home for Rumi. "I didn't want her to end up in a shelter," she added.

Next, Koontz set up a GoFundMe campaign to cover medications, vaccines and shipping costs and raised $3,500. Soldiers on base pitched in, and she also got a donation from Puppy Rescue Mission, an organization in Baghdad that finds homes in the United States for dogs from combat zones. 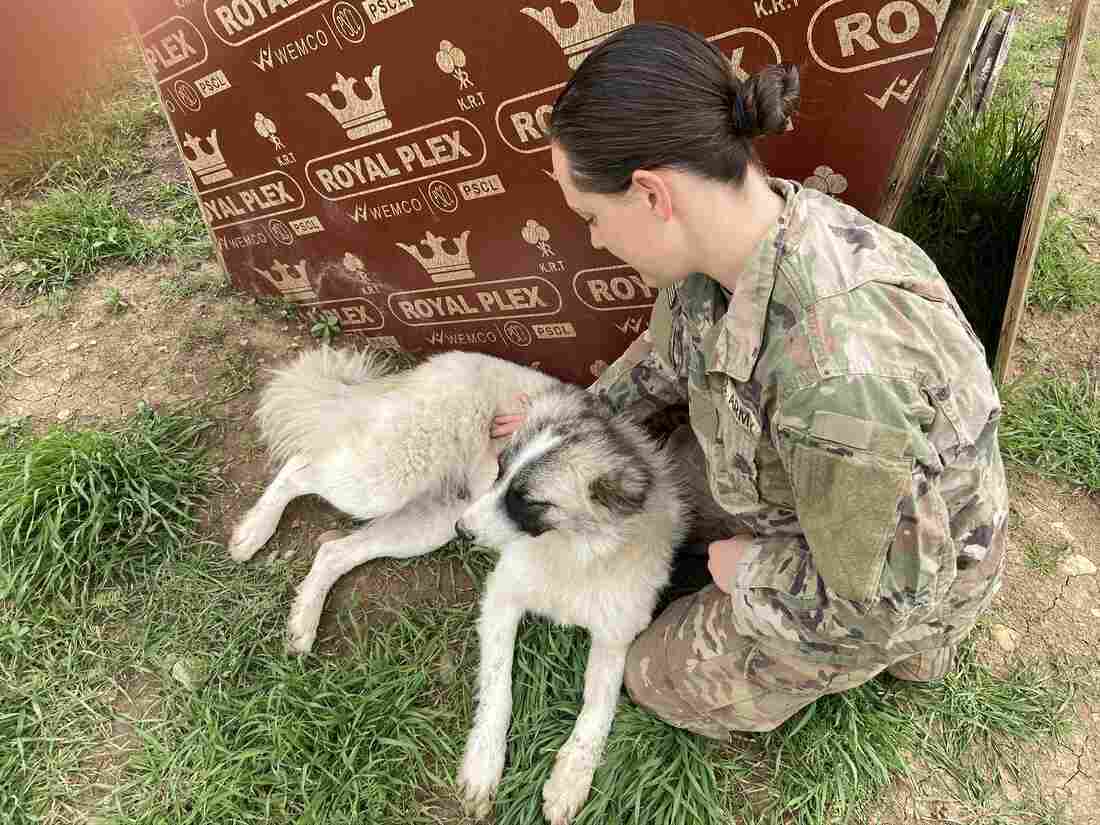 1st Lt. Shelby Koontz and Rumi meet after her overnight shift ends. They sit for a scratch session next to the dog house that the soldiers built for Rumi on base. Marisa Peñaloza/NPR hide caption 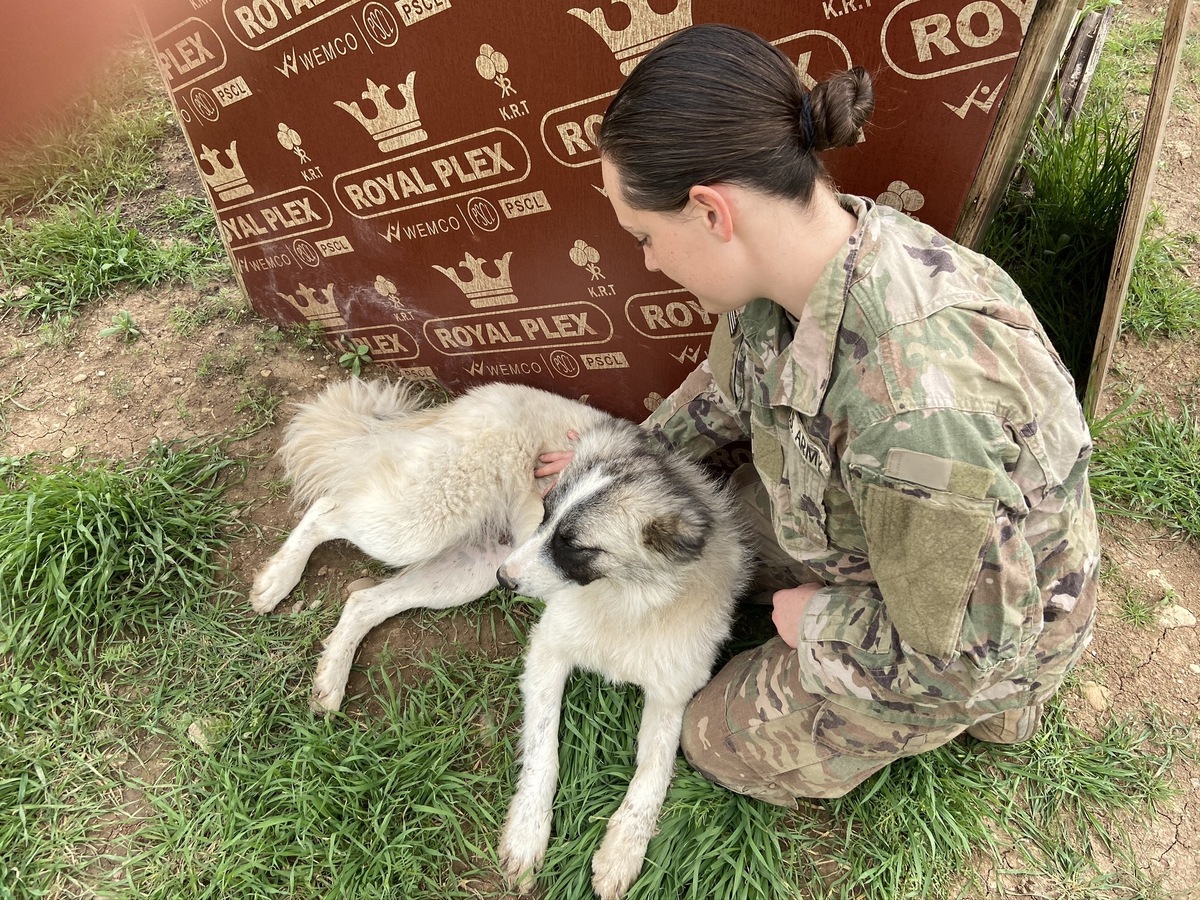 1st Lt. Shelby Koontz and Rumi meet after her overnight shift ends. They sit for a scratch session next to the dog house that the soldiers built for Rumi on base.

"Oh, hello, good morning, Rumi," Koontz coos as she plops down to scratch the dog's ears and tummy.

Petite with straight dark-brown hair pulled into a bun, Koontz says Rumi brings more than companionship to the soldiers. She reminds the lieutenant of her own rescue dog back home, Nokoni.

"She has a tremendous role in the emotional well-being and morale of the people here," Koontz says, adding that Rumi just makes everyone smile.

Captain Max — who asked NPR to use only his first name for security reasons — says that many soldiers wouldn't admit how much the dog matters to them. "They all love Rumi deep down," the captain says.

He adds that the Army routine can get to soldiers.

"It's kind of a sea of camo uniforms and tan vehicles and concrete and rocks and mud, and it just doesn't feel like home," Max says of the base. "Rumi just kind of feels like home."

"She's definitely kind of given me a sense of purpose in an emotional sense out here," the lieutenant says.

Rumi is now in a 30-day quarantine in Iraq. Once she's deemed healthy, she's expected to fly to the U.S. to join her adoptive family at Fort Bliss, Texas, although current coronavirus travel restrictions may delay her arrival.

"The day she makes it to the States, it's going to be the proudest day of my deployment," Koontz says.

When people back home ask Koontz about her deployment, she says, "I'm not going to say, 'Oh, I did these many patrols,' or 'I was out at this place and we did this.' It's going to be, 'I saved a dog.' "