Accessibility links
Biden Is Trying To Win Progressives That Had Backed Sanders Now that Bernie Sanders is out of the presidential race and Joe Biden is the presumptive nominee, his campaign is reaching out to progressive groups. 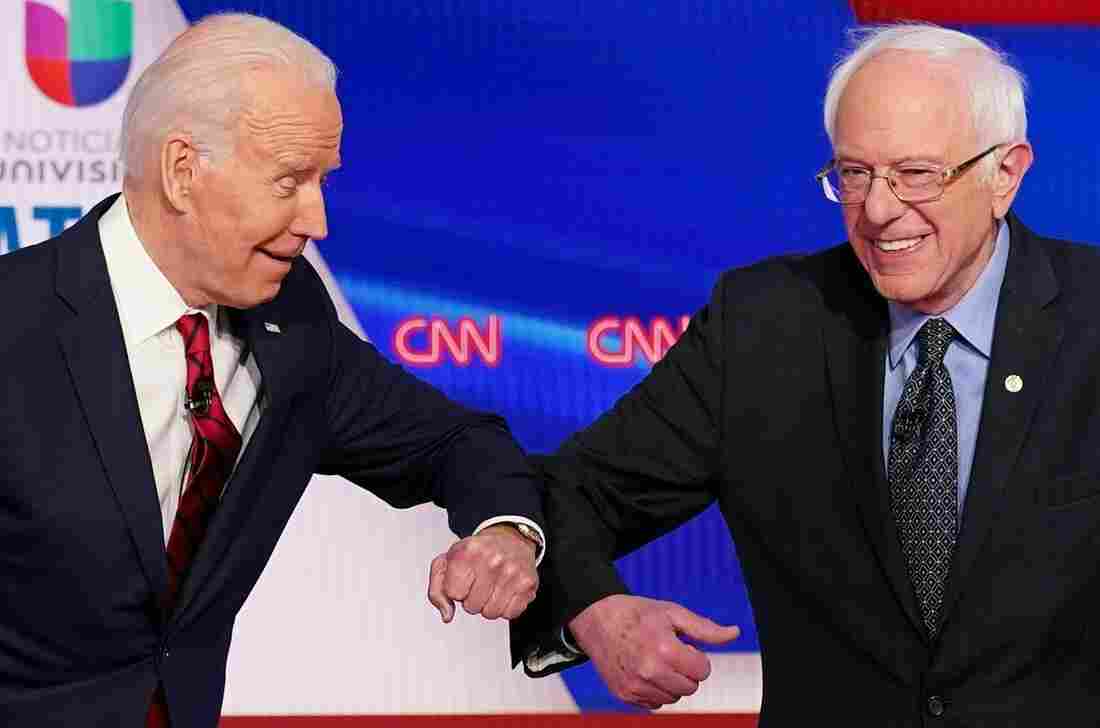 Joe Biden has made overtures to Bernie Sanders and progressive groups that had backed the Vermont senator. Mandel Ngan/AFP via Getty Images hide caption 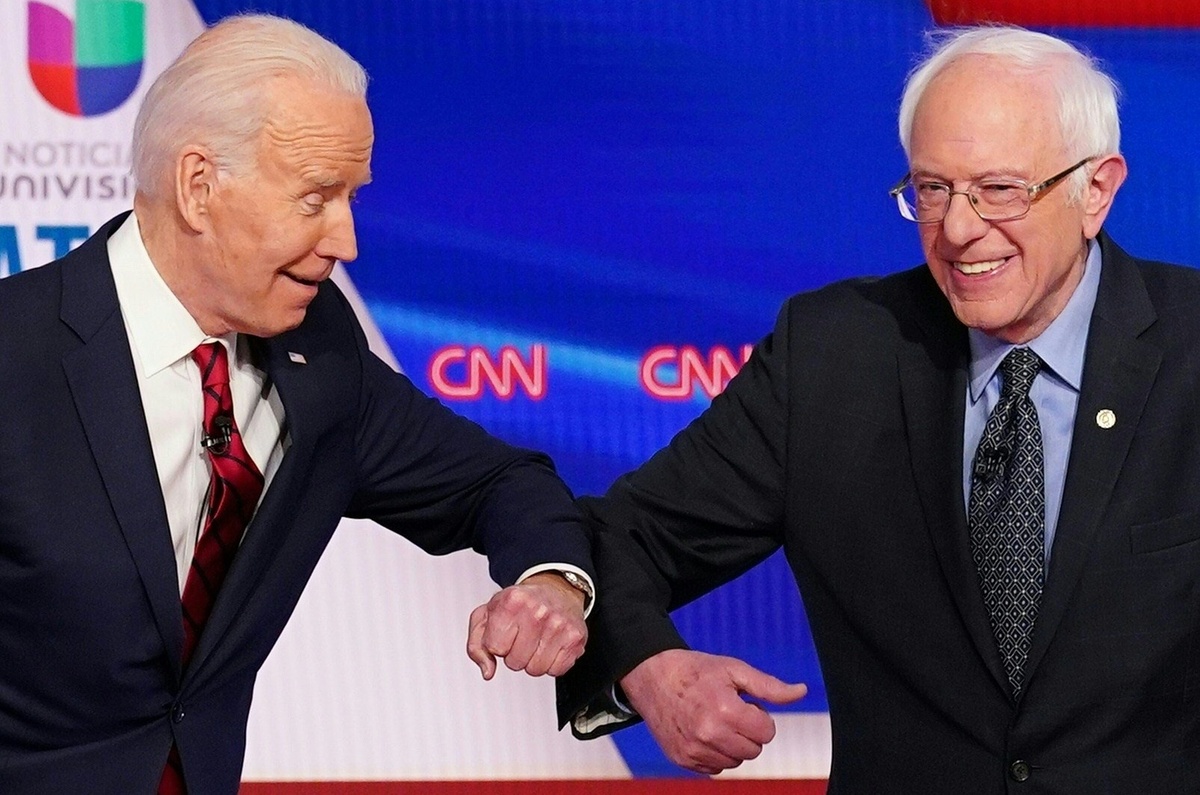 Joe Biden has made overtures to Bernie Sanders and progressive groups that had backed the Vermont senator.

A day after Bernie Sanders dropped out of the presidential race, Joe Biden, now the presumptive Democratic nominee, made an overture to progressives.

On Thursday he rolled out two new policy proposals:

"Senator Sanders and his supporters can take pride in their work in laying the groundwork for these ideas, and I'm proud to adopt them as part of my campaign at this critical moment in responding to the coronavirus crisis," Biden said in a statement announcing his plans. And the day before, when Sanders suspended his campaign, Biden put out a 700-word statement praising the Vermont senator as a "powerful voice" whose movement "changed the dialogue in America."

Biden and Sanders appear to have a genuine affection for one another, something that wasn't the case with Sanders and Hillary Clinton in 2016. And Sanders insisted from the outset of his 2020 candidacy that he would do whatever was needed to assist the eventual Democratic nominee to defeat President Trump.

But the question has long been whether Sanders' most ardent progressive supporters, some of whom have been leery of Biden's record, will follow him.

"The Biden campaign really did the least outreach of any of the major front-runners to Sunrise Movement throughout the election cycle," said Evan Weber, one of the co-founders of the youth-led climate-focused organization.

The group endorsed Sanders during the primary. But a couple of weeks ago, as it became clear that the former vice president would likely be the nominee, Weber said Biden's campaign tried to restart the relationship.

"They reached out to learn what they could do more to improve their proposals and record on [the] climate crisis," he said. "And also I think [they have] a broader interest in engaging young people."

Despite those conversations, the Sunrise Movement was one of eight youth-led progressive groups to sign an open letter to Biden that was published Wednesday. In it, they reminded Biden that even though he is now the presumptive nominee, he had struggled to win votes from young people.

"Messaging around a 'return to normalcy' does not and has not earned the support and trust of voters from our generation," the organizations wrote. "For so many young people, going back to the way things were 'before Trump' isn't a motivating enough reason to cast a ballot in November."

Collectively, the groups asked for concessions on both policy and personnel, and they outlined a list of aggressive demands, such as adopting a wealth tax, supporting "Medicare for All," eliminating the filibuster and expanding the Supreme Court.

In response, Biden's policy director, Stef Feldman, said in a statement: "Vice President Biden and our campaign have been engaging with progressive leaders. We are continuously considering additional policies that build on his existing policies and further the bold goals driving Vice President Biden's campaign."

Behind the scenes, Feldman and Biden advisers Cristobal Alex and Symone Sanders have been reaching out to progressive organizations individually to talk.

"We have obviously not touched base with everyone we need to talk to," Sanders acknowledged on Thursday.

But multiple groups, including a few that have now been in touch with Biden's team, spoke of trying to engage with his campaign during the primary only to be ignored.

As much as these activists want their policy ideas accepted, it seems at least some of them simply want to be heard.

Bernie Sanders told Stephen Colbert on The Late Show on Wednesday that he knows Biden is "not gonna adopt" his platform, but if the former vice president can indicate that he's willing to listen, Sanders thinks his supporters will come around.

In that same interview, Sanders also suggested Biden can and will move on a range of policy issues that matter to Sanders' voters, such as tuition-free college, climate change, raising the minimum wage, criminal justice reform and immigration reform.

Notably, Sanders did not mention his signature issue: Medicare for All.

But for some of his supporters, health care is the most important issue, especially at this moment.

"I believe it's important to see movement on Medicare for All," said Ana Maria Archila, co-executive director of the Center for Popular Democracy Action, an umbrella group of a number of progressive organizations that had endorsed Sanders during the primary. "It is kind of unimaginable that someone who is running as the Democratic nominee could still defend the idea of private health insurance in a moment like this," she added, referring to record levels of unemployment during the coronavirus crisis.

Her organization has not spoken directly with the Biden campaign, but she said his team has reached out to some groups in their network, specifically Latino groups.

Of all issues, health care is likely the most difficult for Biden to move on, but Yvette Simpson, CEO of Democracy for America, feels it would be the most meaningful. Her organization also backed Sanders in the primary.

Simpson worries that if Biden can't show any additional policy changes on health care, it'll be challenging to motivate progressive voters to support him.

Two other important issues, she said, are climate change and income inequality. And on those, she thinks there could be some room for change.

"Despite the fact that I'm very, very hard on Biden, I think we have seen him shift over the decade, so I'm cautiously optimistic about his potential to shift," Simpson said. "We know him to be someone who is willing to listen, we've seen this shift on the [1990s] crime bill and his acknowledgement of his failures there."

DFA issued a statement Wednesday saying that is a "100% committed to doing everything" it can to ensure Biden defeats Trump.

That means it'll be using its organizing muscle — money and people — to turn out voters for Biden in November. "That'll be easier to do if he has some actual issues we can get people excited about," Simpson added with a laugh.