Accessibility links
Americans Returning To U.S. Say They're Surprised By Lack Of Stringent Health Checks Travelers are finding a wide range of health screenings at U.S. airports, even after repatriation and other international flights.

Americans Returning To U.S. Say They're Surprised By Lack Of Stringent Health Checks

Americans Returning To U.S. Say They're Surprised By Lack Of Stringent Health Checks 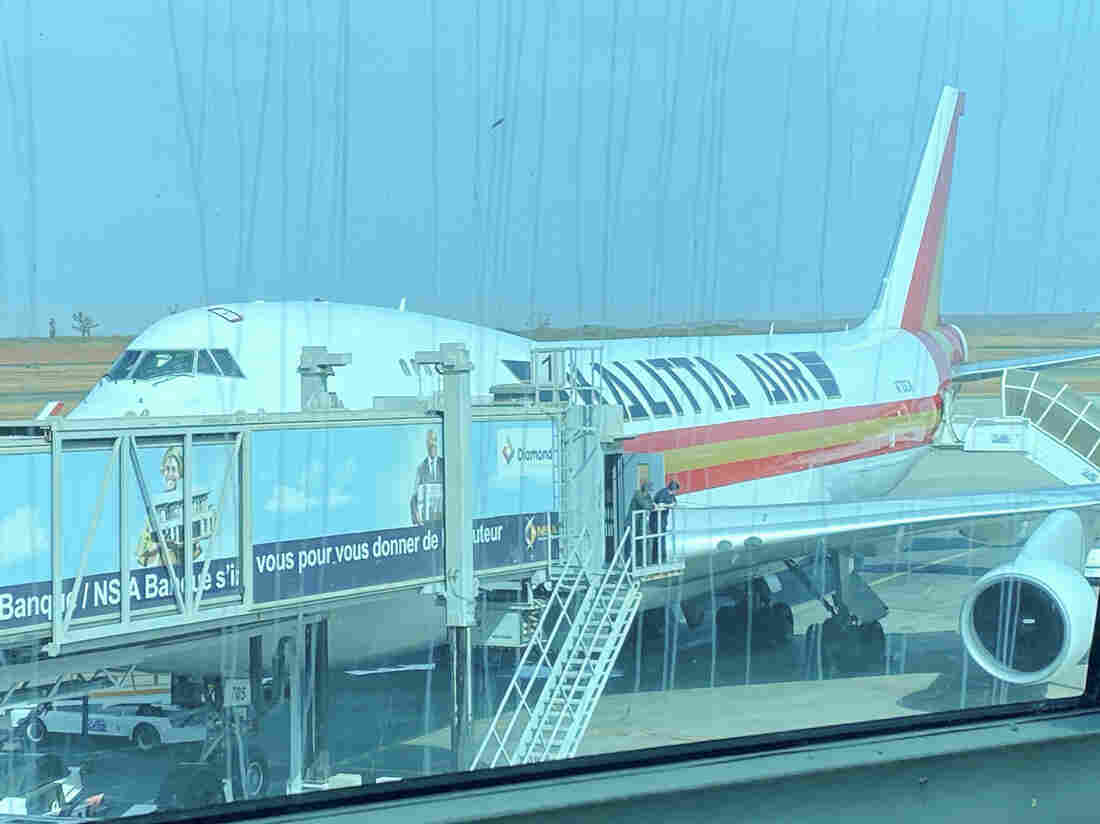 A recent flight from Senegal brought some 150 people back to the U.S., due to the coronavirus. The crew were wearing personal protective equipment — but when the flight landed, its passengers were taken to baggage claim, rather than to a health checkpoint. one passenger reported. via DanHonig hide caption 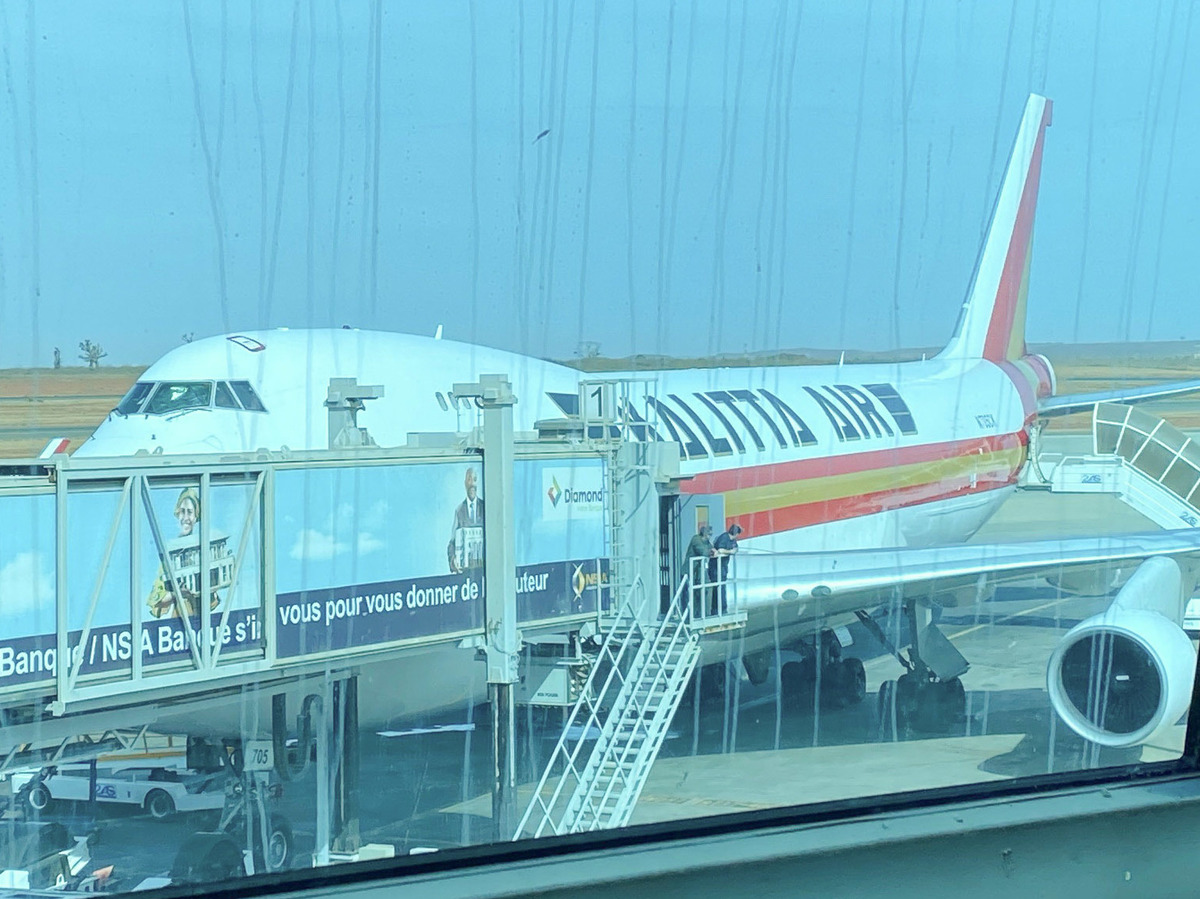 A recent flight from Senegal brought some 150 people back to the U.S., due to the coronavirus. The crew were wearing personal protective equipment — but when the flight landed, its passengers were taken to baggage claim, rather than to a health checkpoint. one passenger reported.

Americans returning home from abroad are being greeted with varying levels of health screenings at U.S. airports — with some saying the U.S. measures are less stringent than what they've experienced overseas.

"I expected that my temperature would probably be taken, as it had been when boarding the flight," says Dan Honig, who arrived at Washington Dulles International Airport on April 3 aboard a State Dept. repatriation flight from Senegal due to the COVID-19 pandemic. Passengers on other flights have made similar comments about expecting more extensive health checks upon arrival in the U.S.

Passengers on Honig's flight wore face masks and armbands listing their temperatures — and the plane was staffed by medical workers in hazmat suits, he said. But upon arrival at Dulles, the group of some 150 passengers didn't undergo a final health screening; Honig says they were dropped off at the arrivals terminal, where people headed to baggage claim and on to their final destinations including, in some cases, domestic flights.

When NPR asked U.S. Customs and Border Protection about Honig's experience and seeking clarity about the COVID-19 screening policy for repatriated Americans, a spokesperson said the agency is following guidelines from the Centers for Disease Control and Prevention.

Travel to the U.S. is now restricted from countries including China, Iran, the U.K. and most of Europe. The CBP representative said via email that the agency's officers look to refer travelers arriving from those countries, or who shows symptoms of COVID-19, for "enhanced health screening" by the CDC.

The process may vary by location, they said, due to several factors that include "whether health screening occurs before travelers reach CBP primary inspection."

Dulles International Airport has issued guidance for people arriving on international flights, saying travelers coming from China, Iran, the U.K. and the European Union's open-border Schengen Area are taken in groups of 50 to be screened for COVID-19 by staff from the CDC and Department of Homeland Security. The airport does not mention any screenings for travelers arriving from other countries.

A request for further comment from Dulles was referred to the CDC. Multiple requests to the CDC for comment since Thursday were not answered before this story was published. The CDC website offers a travel warning and some basic guidance for travelers.

The State Dept. has brought more than 45,000 Americans home on repatriation flights, it said earlier this week. The flights came from a wide range of countries, such as Peru, India, Egypt, Nepal and Burundi, according to Ian Brownlee, who runs the department's repatriation task force. Those countries, like Senegal, have not been among the world's hotspots for COVID-19.

The massive repatriation effort is in response to the Level 4 travel advisory the State Dept. issued last month instructing U.S. citizens not to travel internationally — and for those who are abroad, to either return immediately or be prepared to remain abroad indefinitely.

Coming home to America during a pandemic was alternately inspiring and puzzling, as Honig decsribed it on Twitter and in an interview with NPR. Honig, an assistant professor at Johns Hopkins School of Advanced International Studies, or SAIS, recounts that crew members were medical professionals.

"Listen up!" one yelled, according to Honig. "This isn't a normal flight, and we're not flight attendants — we're medical professionals. Our job is to get you home safe."

They had been working for six days straight and had another flight coming up the following day; when someone asked if they were being paid overtime, the medical professional laughed, Honig said.

My family and I took an @StateDept evacuation flight from Senegal to the US on Friday. I’d like to say a few things about that, focusing on 1) The people who work for State (wonderful) & 2) The impression it left me about coordinated US airport response to COVID (disturbing). 1/

"We're government employees. No. This is our job," Honig quoted the man as saying. "This is why I signed up for this job. I'm proud to do this — I'm honored to help y'all get home."

But upon arriving, one of the only overt acknowledgements of the pandemic, Honig said, came when an immigration officer asked whether he had been to any country other than Senegal in the last 14 days.

"I didn't know if we would be given self-quarantine orders," he says, "but I thought, at the very least, we would be kind of recommended to do so."

After Honig shared his impressions of flying into the U.S., others came forward to tell similar stories.

The repurposed cargo plane that we entered that morning was operated by the US Department of State’s Operations Medicine team. We all wore masks, the evacuation team PPE. Here’s a photo (which hopefully sets the scene without personally identifying any fellow passengers). 4/ pic.twitter.com/MJlTVDHF6L

One of those people was Hillary Vance, of the University of Arizona.

Vance and her husband, Phil Butterworth, flew from Cambodia to Los Angeles on a commercial flight last week after learning there wouldn't be a repatriation flight. Their flight transited through Tokyo; a month earlier, the same trip was routed through South Korea.

'The only screening I had was at the airport in Seoul (March 4) and in Tokyo (April 2)," Vance says.

"Airports around Southeast Asia (I travel for work) were much more regular about temperature screenings, health questionnaires, and getting contact information from arriving passengers including what seats they sat in and where they were staying," Vance says.

There were no such precautions during either of her arrivals in the U.S., Vance says.

Another traveler, who flew on a commercial flight from Guangzhou, China, to Los Angeles last week, tells NPR that the only screening she faced was having her temperature taken at both ends of the journey — including in the U.S.

And in reply to Honig's tweets about his flight, economist Jock O'Connell said, "We arrived at [San Francisco International] on March 20 from Spain. We did receive a medical check in the jetway before being allowed into the airport." He said the medical check was performed by San Mateo County Health Department officials.

Honig, who is on a sabbatical from his university job to write a book about what he calls "mission-driven bureaucrats," said he traveled from Senegal to Guinea-Bissau on Feb. 22 — where he "was asked to wash my hands with bleach water; my temperature was checked; I was asked questions about my movements and health status."

As for what he expected the process of entering the U.S. to be like, Honig says, "I expected at least as much as I experienced entering Guinea-Bissau six weeks earlier."