Accessibility links
Coronavirus Will Reshape Voting Rights In The 2020 Election This week's primary in Wisconsin, which produced long lines of voters waiting in protective gear to cast their ballots, is a dire warning of what could lie ahead. 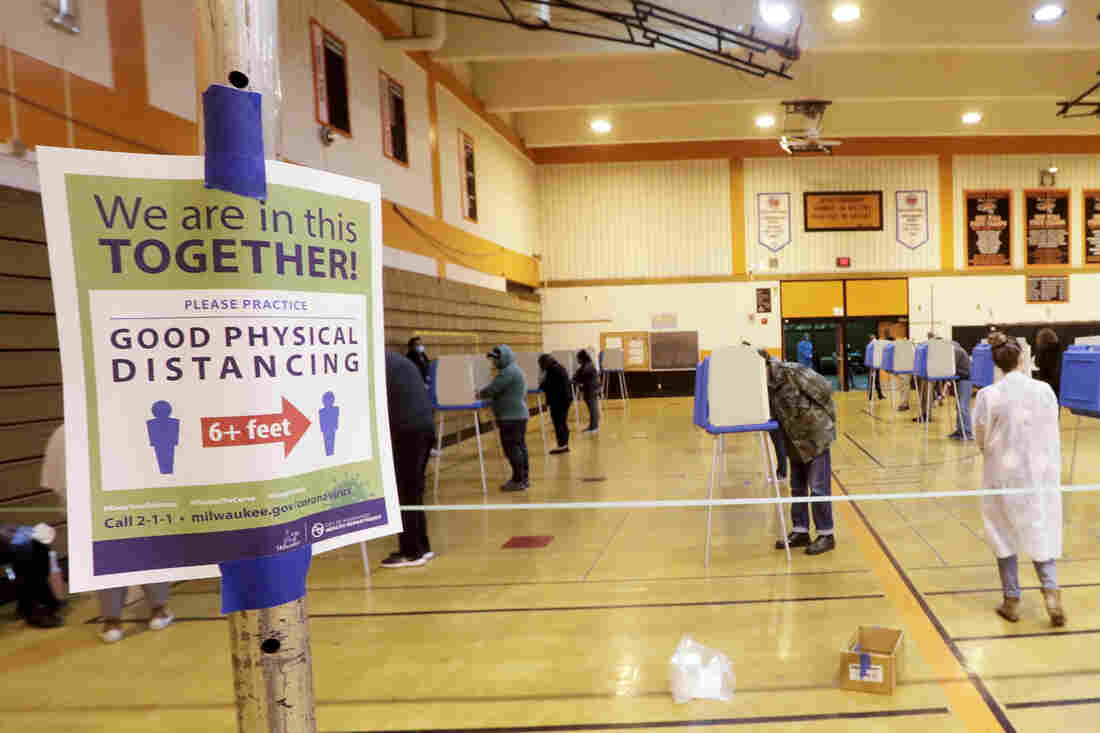 Voters cast ballots at Riverside High School during Wisconsin's primary election on Tuesday in Milwaukee. It's the only state to hold a major election since stay-at-home orders were issued across most of the country. Morry Gash/AP hide caption 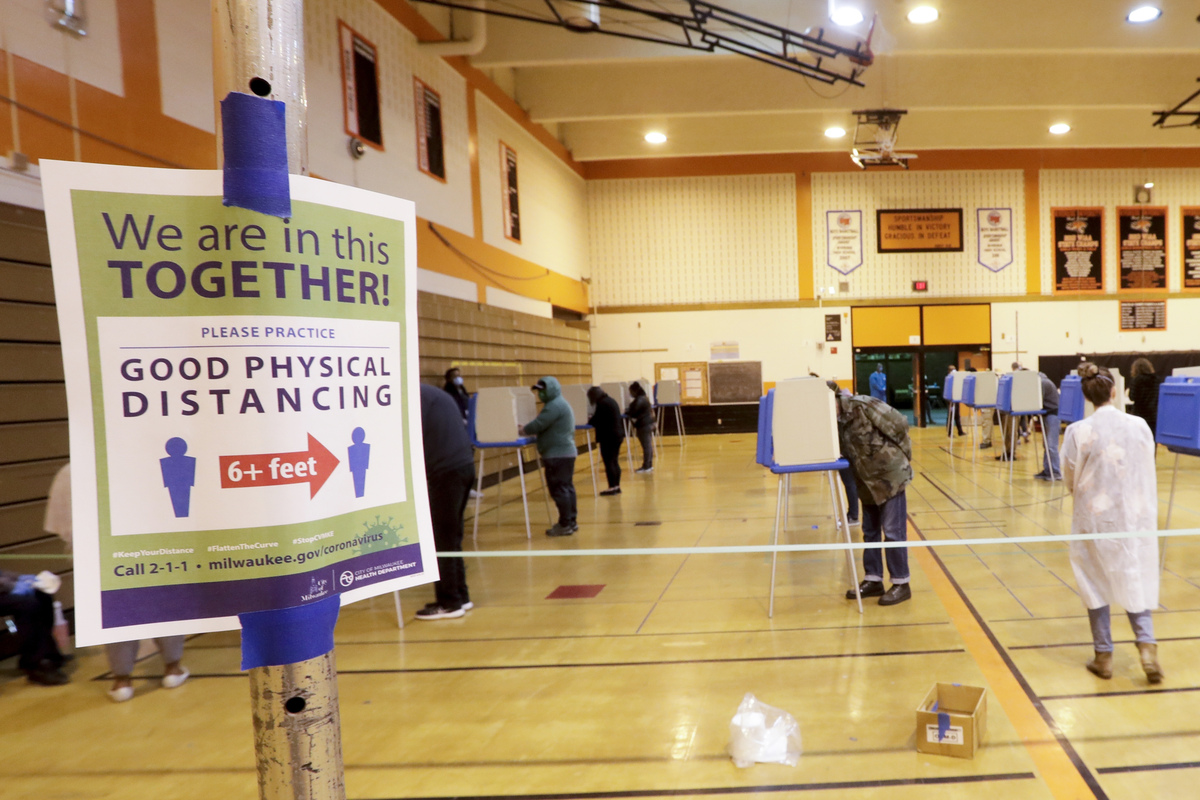 Voters cast ballots at Riverside High School during Wisconsin's primary election on Tuesday in Milwaukee. It's the only state to hold a major election since stay-at-home orders were issued across most of the country.

Who does and doesn't get to vote in November could rest on how states, political parties and the federal government respond to the coronavirus threat to U.S. elections.

The pandemic has already caused major disruptions. Partisan legal fights have erupted over how to address voters' concerns about showing up at the polls in person. This week's primary in Wisconsin, with long lines of voters waiting in protective gear to cast their ballots, offered a dire warning of what could lie ahead.

McDonald said Wisconsin is "just one canary in a coal mine. We have a whole flock of canaries that could also be under severe distress come November."

The focus now is over the expansion of mail-in and absentee balloting to help Americans who have been told to stay in their homes. A handful of states already conduct their elections primarily through the mail. The rest allow some form of absentee voting, but to varying degrees.

It's an increasingly popular form of voting, accounting for nearly 1 in 4 ballots cast in 2018. Even before the pandemic, more states were expanding absentee and vote-by-mail options as a way of providing voters more flexibility and reducing Election Day polling place lines.

Several states have already made changes for upcoming primaries and are considering extending them into November. The question is how much to loosen the rules and who will be affected.

President Trump is among those who believe that Republicans would be hurt. He has made no secret that he does not like mail-in voting — even though he and the first lady cast their ballots that way in last month's Florida primary. He said it provides tremendous potential for voter fraud, although there are only limited examples that such fraud has occurred. 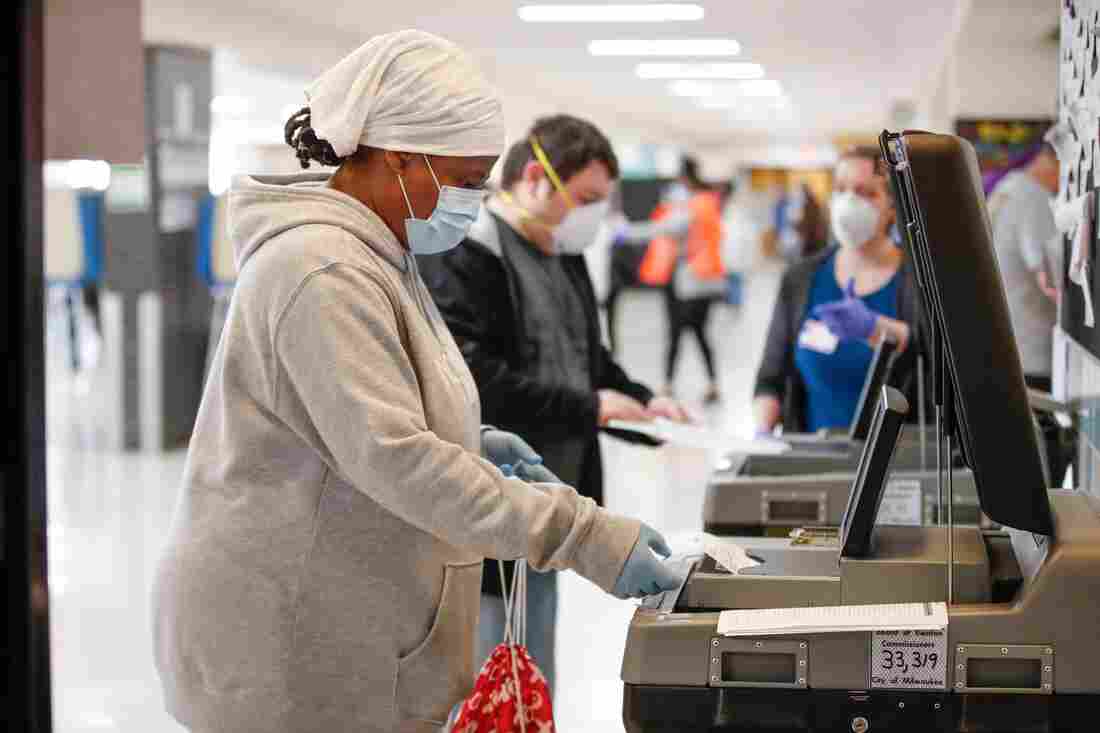 A woman casts her ballot at a high school in Milwaukee this week. The coronavirus pandemic will likely reshape how Americans vote and even who casts a ballot this November. Kamil Krzaczynski/AFP via Getty Images hide caption 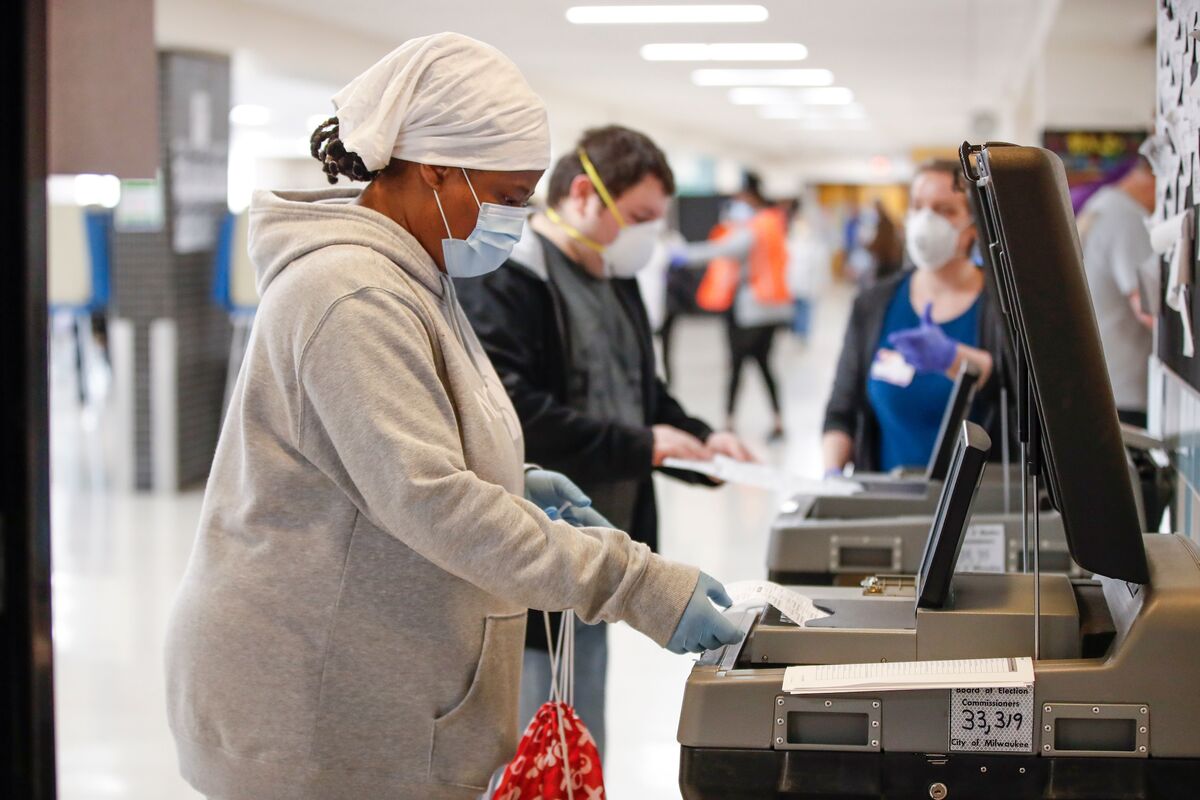 A woman casts her ballot at a high school in Milwaukee this week. The coronavirus pandemic will likely reshape how Americans vote and even who casts a ballot this November.

"Mail-in voting is a terrible thing," he told reporters at the White House this week. "I think if you vote, you should go, and even the concept of early voting is not the greatest, because a lot of things happen."

Across several tweets, Trump said absentee voting might be great for "many senior citizens, military, and others who can't get to the polls on Election Day" but that statewide mail-in voting "doesn't work out well for Republicans."

But McDonald and other election experts say that's not necessarily the case. They note that both Republican- and Democratic-led states are among those that use widespread mail-in voting. And recent studies have found that absentee voting doesn't seem to favor one demographic group over another, although older voters do tend to use it more than others.

"There hasn't been strong evidence that a wholesale shift to voting by mail does cause a state to move more Democratic or more Republican," said Patrick Ruffini, partner and co-founder of Echelon Insights, a Republican polling and analytics firm.

"The devil is truly in the details," said Ruffini, adding that "any time the voting system changes, even under nonemergency circumstances, you're going to see each party try to change things in a way that they feel like they have the advantage."

The legal fights have already begun.

Wisconsin Republicans successfully appealed to the U.S. Supreme Court to overturn a lower court's ruling that absentee primary ballots could be postmarked after Election Day. Citing the chaos in Wisconsin's primary, Texas Democrats filed a suit this week claiming that their state's restrictive mail-in voting rules are unconstitutional. In Georgia, voting rights groups are objecting to a requirement that voters have to pay their own postage, likening it to a poll tax. Republicans are also fighting efforts in some states to allow what they call "ballot harvesting," or the ability of an individual to collect and return absentee ballots for a large number of people. 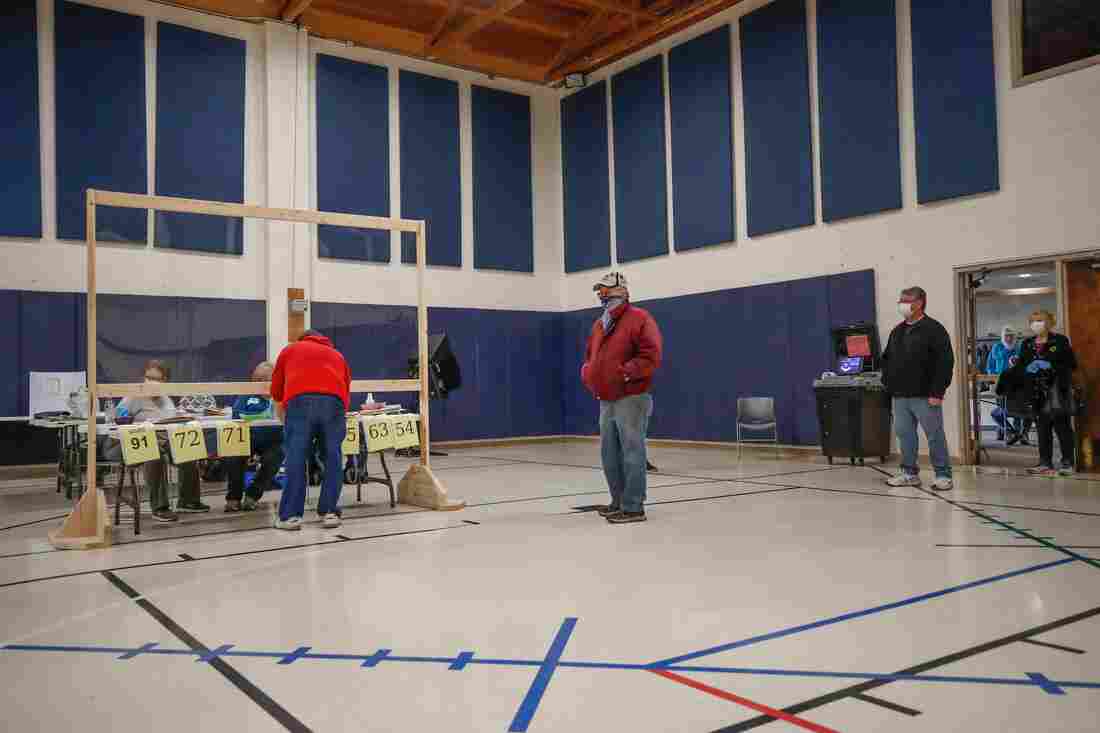 Both parties are fighting over the rules under which elections will be held in the midst of a pandemic, with an eye toward ensuring their voters have an edge. Kamil Krzaczynski /AFP via Getty Images hide caption 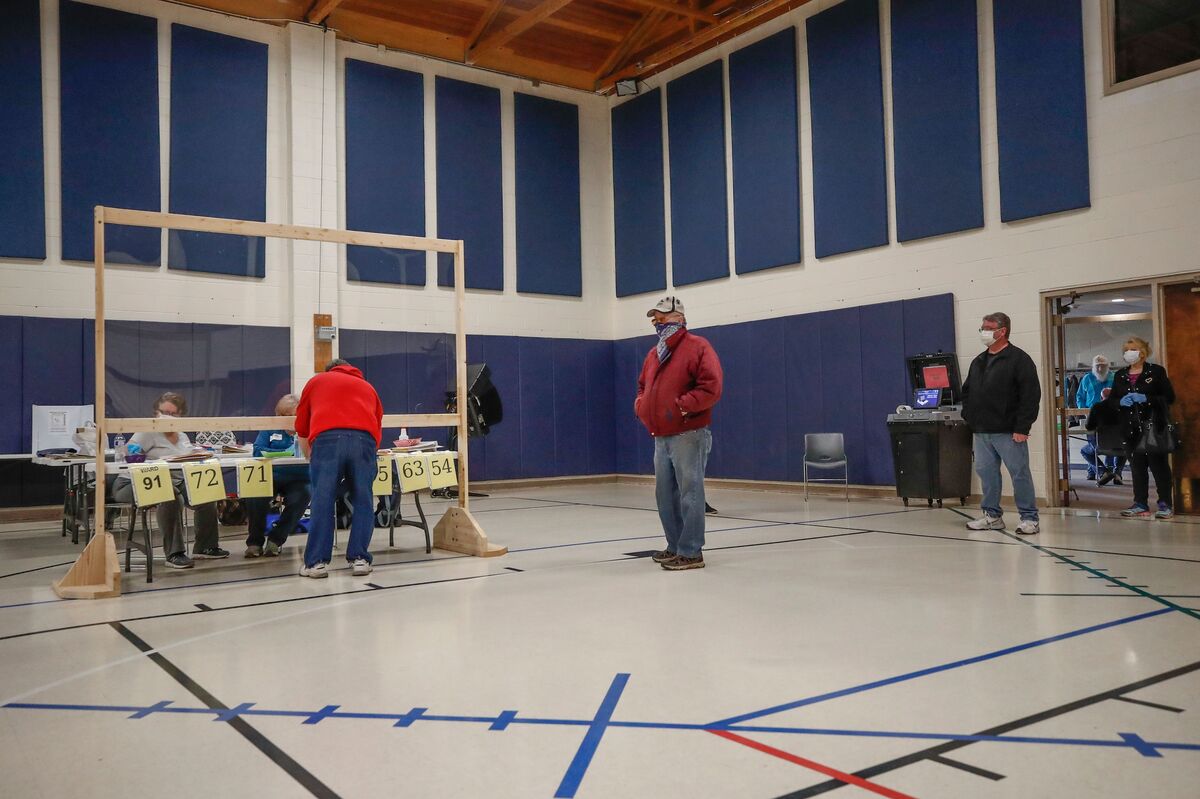 Both parties are fighting over the rules under which elections will be held in the midst of a pandemic, with an eye toward ensuring their voters have an edge.

There are also proposals in Congress and the states to increase early voting and to allow voters to register on Election Day, in an effort to expand access to the polls during the current crisis. Democrats support the changes and Republicans are generally opposed, although again, it's not clear who would benefit the most.

The electorate will likely be different in November than it would have been without the pandemic, but it's too soon to know how, said Tom Bonier, who runs TargetSmart Communications, a Democratic data firm.

"That's the big question and that's what we're seeking to answer at this point. There's too many factors at play in terms of voter safety, changes in voting mechanisms, changes in the economy, changes in voter registration methods and how people can engage in the electorate," Bonier said. "At this point, I think it's safe to say that no one has that answer."

The common belief that Democrats gain when turnout is high and Republicans lose just isn't borne out by the facts, agreed McDonald, the political scientist who studies voter turnout.

The good news is there's enough time for states to make the changes needed to ensure that everyone who wants to vote in November will be able to do so, despite the pandemic, said Ned Foley, an election law expert at the Ohio State University. But he worries that the parties will choose instead to "gerrymander the virus" and shape the rules for political gain.

"You would like to think that patriotism would win out here and that our political leaders would think that the first and most important thing is to get a fair electoral process for the sake of the citizens as a whole. That shouldn't be too hard," he said.

But he thinks the early signs, especially the partisan divide over the conduct of Wisconsin's primary, are not encouraging.