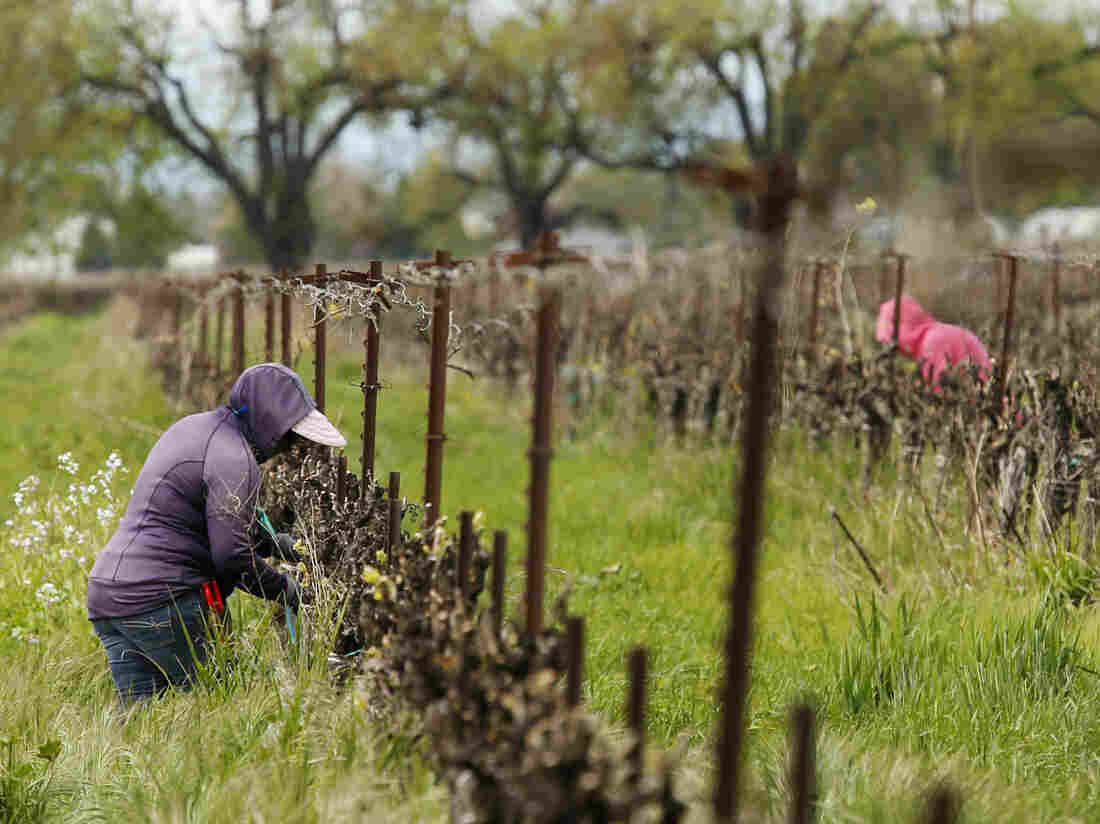 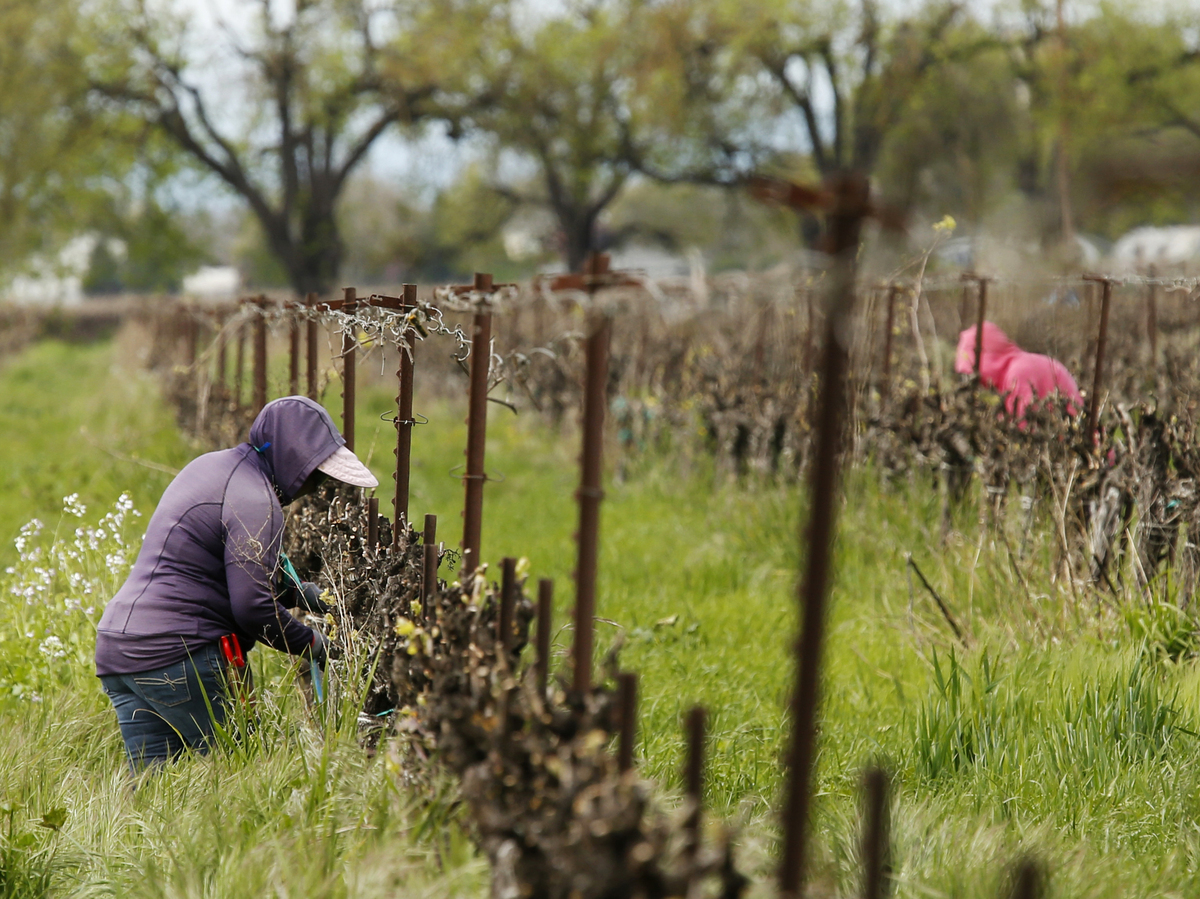 Work continues at a winery in Clarksburg, Calif., last month. Farms are operating as essential businesses amid the coronavirus pandemic.

New White House Chief of Staff Mark Meadows is working with Agriculture Secretary Sonny Perdue to see how to reduce wage rates for foreign guest workers on American farms, in order to help U.S. farmers struggling during the coronavirus, according to U.S. officials and sources familiar with the plans.

Opponents of the plan argue it will hurt vulnerable workers and depress domestic wages.

The measure is the latest effort being pushed by the U.S. Department of Agriculture to help U.S farmers who say they are struggling amid disruptions in the agricultural supply chain compounded by the outbreak; the industry was already hurting because of President Trump's tariff war with China.

"The administration is considering all policy options during this unprecedented crisis to ensure our great farmers are protected, and President Trump has done and will do everything he can to support their vital mission," a White House official told NPR.

The nation's roughly 2.5 million agricultural laborers have been officially declared "essential workers" as the administration seeks to ensure that Americans have food to eat and that U.S. grocery stores remain stocked. Workers on the H-2A seasonal guest-worker program are about 10% of all farmworkers.

The effort to provide "wage relief" to U.S. farmers follows an announcement Friday by the USDA to develop a program that will include direct payments to farmers and ranchers hurt by the coronavirus. Trump said Friday that he has directed Perdue to provide at least $16 billion in relief.

The most recent push to lower wage rates for workers on H-2A visas has drawn pushback from some strange bedfellows: immigrant-rights advocates and immigration hard-liners usually aligned with Trump.

Erik Nicholson, national vice president for the United Farm Workers, says people who have worked in agriculture for decades are concerned they are going to lose their jobs. And he said vulnerable guest workers are not being provided proper hand-washing facilities and still being forced to live in cramped housing.

"So in the middle of a pandemic, rather than trying to figure out the cheap way to do things, we need to make sure we live up to the expectations society has of us as an industry to keep the food flowing," Nicholson said.

Groups on the right fear Trump is succumbing to the will of the agriculture lobby that is demanding lower wages for foreign and domestic farmworkers at a time of record high unemployment in the United States.

The Department of Labor reports that 16.6 million Americans have filed for unemployment aid in the past few weeks.

"President Trump should see right through what the agriculture lobby is demanding in the name of 'food security' at the height of a health crisis – lower wages for American workers and more cheap foreign labor," said Dan Stein of the Federation for American Immigration Reform, which supports immigration restrictions. "These appalling demands underscore that the whole way this nation produces food should be reexamined."

It's unclear how the reforms would be made, including whether they would be taken through executive action or through the federal regulatory process. But Perdue has pushed for adjusting what is known as the adverse effect wage rate, which prevents farmers using the H-2A program from paying all workers — U.S. and guest workers — wages below the prevailing rates in the surrounding area.

Earlier this year, Perdue said the adverse wage rate has set almost a $15 minimum wage for agriculture, noting "no other business in the country has that," according to the agriculture trade journal DTN.

The "adverse effect wage rates" are based on a USDA survey of what agricultural workers are paid in each state. It's $11.71 in Florida, $12.67 in North Carolina and $14.77 in California.

A USDA official told NPR that Perdue is working with Trump to "resolve long-standing challenges facing the agriculture industry, including reforms to the H-2A program.

"These challenges have been exacerbated by these uncertain times," the official said in a statement.

U.S. farmers say they have had to cut back on production because of the high number of restaurant and hotel closures. Cory Lunde, a spokesman for the Western Growers Association, said U.S. farmers are fighting to keep "our farms afloat in the face of the near-total collapse of the food-service sector" and more recent slowdown in the retail market.

Lee Wicker, deputy director of the North Carolina Growers Association, said Trump administration officials are trying to look at ways to help because "they understand that we're in trouble and they want to secure the food supply for the American people."

"When a farmer goes out of business, you know, he doesn't come back," Wicker said. "Food supply is a national security issue and, as bad as this COVID-19 crisis is, perhaps it can be a catalyst to start a conversation about our agriculture policy and having sustainable agriculture and diversity."