Accessibility links
'Hope Isn't A Strategy.' How To Prepare For A Natural Disaster During COVID-19 If a major hurricane, flood or wildfire happens during the pandemic, evacuation shelters could be dangerous and cross-state aid impossible. So disaster response experts are planning new strategies. 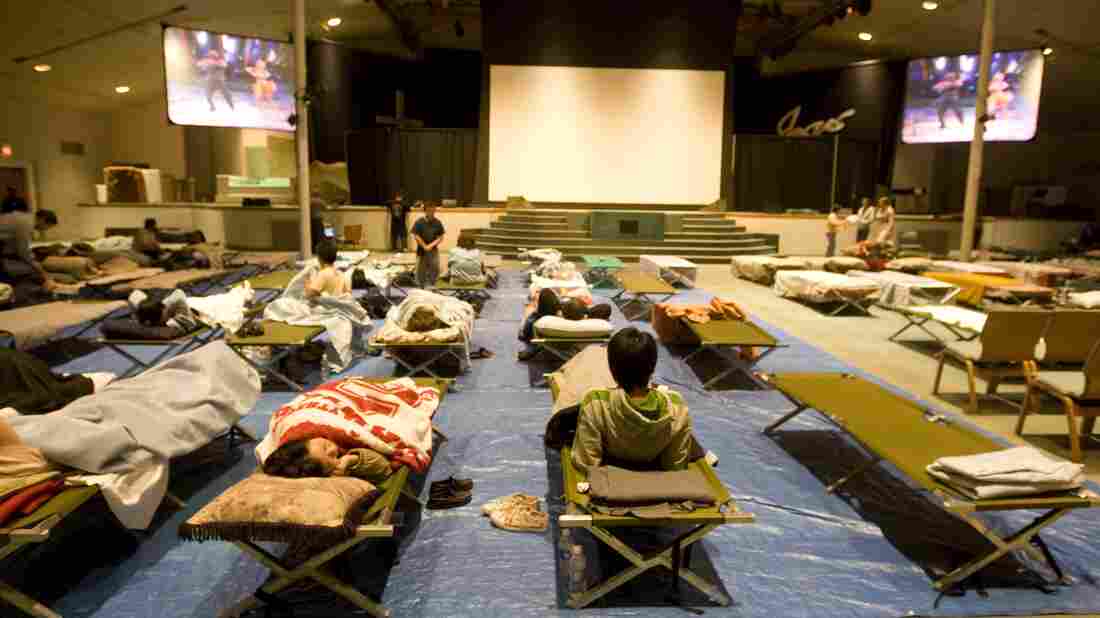 If a natural disaster hits during the COVID-19 pandemic, evacuation shelters like this one in California would be dangerous. Agencies are planning for alternatives. Hector Mata/AP hide caption 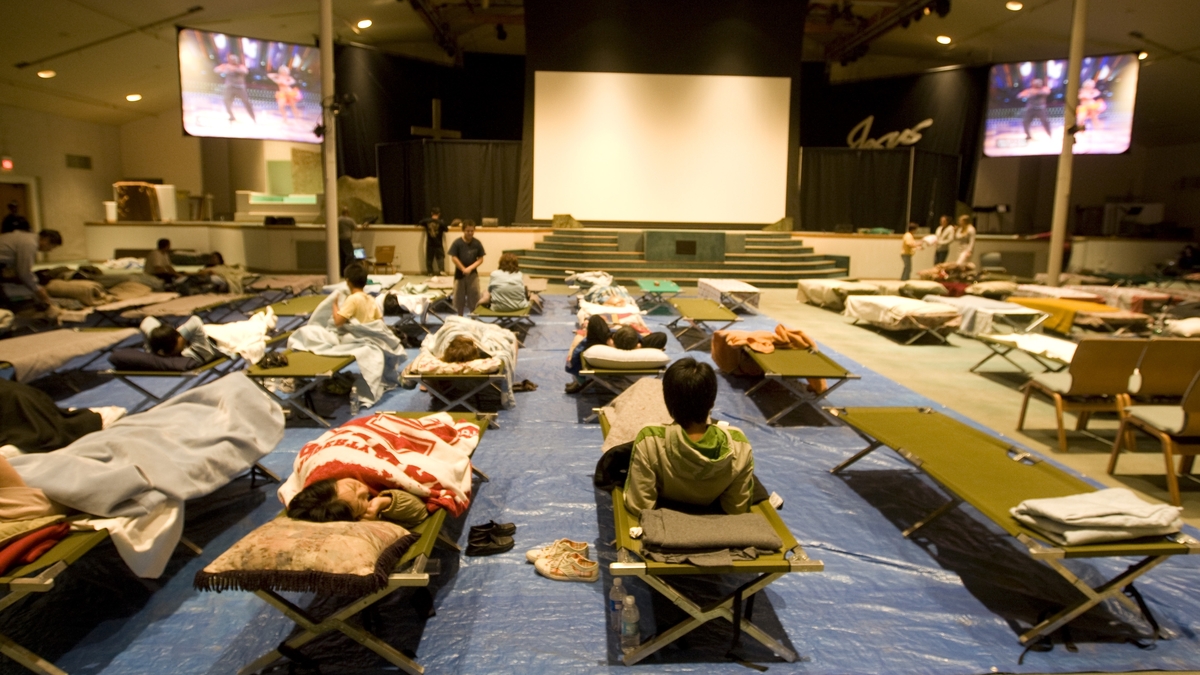 If a natural disaster hits during the COVID-19 pandemic, evacuation shelters like this one in California would be dangerous. Agencies are planning for alternatives.

It's a situation nobody wants to imagine: a major earthquake, flood, fire or other natural disaster strikes while the U.S. is grappling with the ongoing coronavirus pandemic.

Just over a week ago more than 20 tornadoes spun across rural Iowa, damaging apartment buildings and displacing residents. And Flinn's state, like many in the U.S. heartland, is still repairing levees and recovering from unprecedented flooding last year.

While a repeat of that event is unlikely, federal forecasters warn that 23 states from the Upper Plains to the Gulf Coast could see major to moderate flooding this spring. Abnormally warm waters in the Gulf of Mexico are fueling concerns about the potential for extreme weather events and a vicious hurricane season. Snowpacks are lower than normal in a number of Western mountain ranges, raising the prospect of a longer fire season.

In all of those places, emergency responders are already strapped dealing with the pandemic. What's more, much of the usual disaster strategies — evacuation shelters, food assistance, an influx of aid workers — may be dangerous or impractical.

Many are hoping and praying a major disaster doesn't happen while the coronavirus outbreak still has the country in lockdown. But as Craig Fugate, the former head of the Federal Emergency Management Agency, puts it: "Hope isn't a strategy."

So communities and federal agencies are planning new strategies. Here's what disaster response during the pandemic might look like:

The local, state and federal government agencies that typically handle natural disaster response are currently trying to contain and control the pandemic, raising questions about availability and staffing.

That includes FEMA, which President Trump has directed to head the country's COVID-19 response. The agency has more than 2,300 of its roughly 20,000 employees working directly on the pandemic, an agency spokesperson says.

"Even as FEMA is focused on responding to COVID-19, we are also preparing and maintaining readiness for other disasters to include spring flooding, severe weather and the upcoming hurricane season," the spokesperson says.

In the event of a massive disaster, more personnel could be added by activating a Department of Homeland Security program that allows other federal employees to augment the disaster response.

At a state and local level, officials are banding together and planning to support each other, while acknowledging the virus may complicate some of those efforts.

In most disasters, states lend each other personnel through a national mutual aid compact. "But in this event, no one is going to want to send their personnel to other states because of fear of spreading the disease and putting them in harm's way, potentially," Flinn says.

That's why some groups are helping each other on the front end. The Mississippi River Cities and Towns Initiative, a coalition of mayors and leaders along the flood-prone Mississippi River, is working to procure personal protective equipment that could be distributed to a place in need.

Sharon Weston Broome, the mayor-president of Baton Rouge, La., and a member of the coalition, says "the strategy will have to be a little different in order to maximize our effectiveness as neighbors." 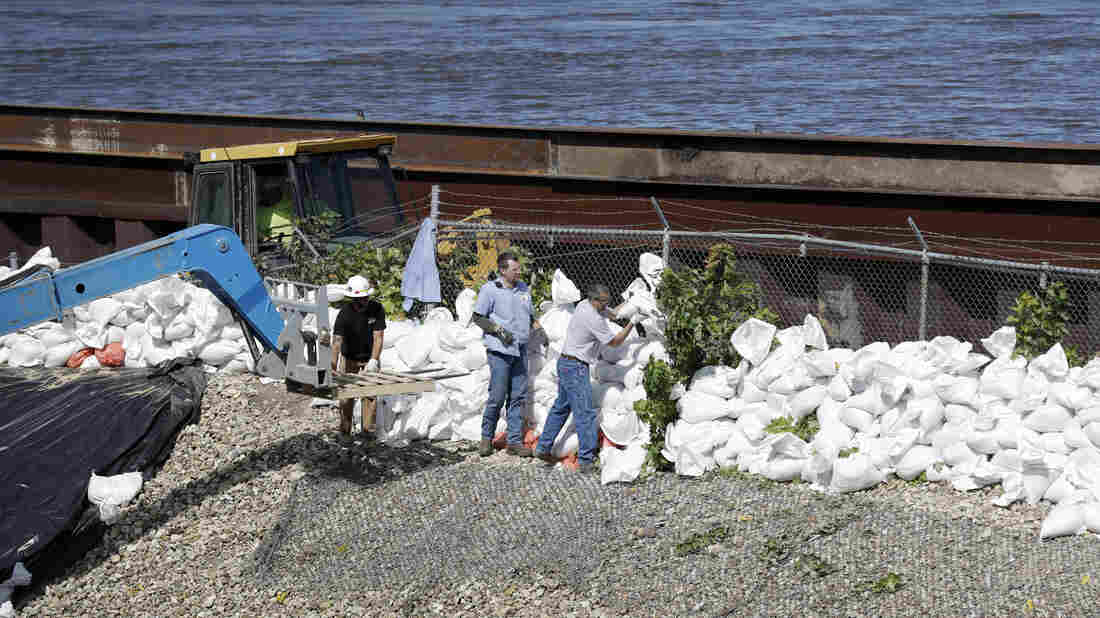 Workers build a sandbag wall near the Cedar River in Iowa in 2016. Disaster response experts say aid workers and others who could assist may not be able to travel during the pandemic. Charlie Neibergall/AP hide caption 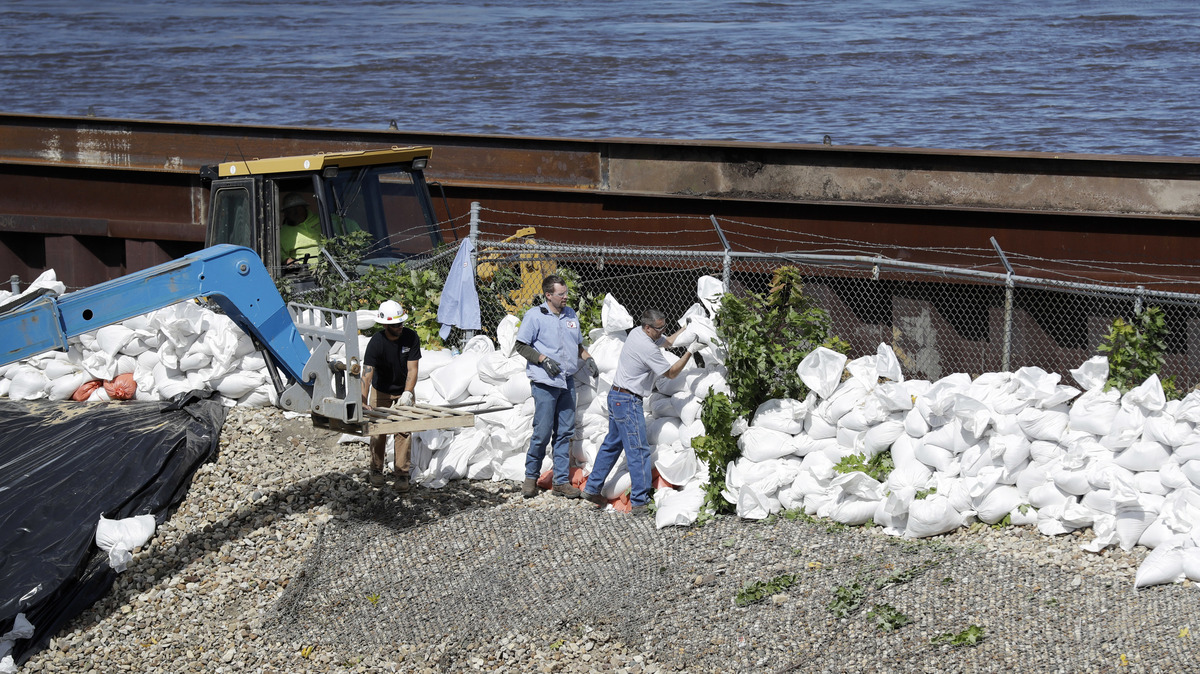 Workers build a sandbag wall near the Cedar River in Iowa in 2016. Disaster response experts say aid workers and others who could assist may not be able to travel during the pandemic.

When a major natural disaster occurs, the area typically sees an influx of thousands of aid workers from government agencies, nonprofits and utility companies.

Given the risk of people traveling and spreading the virus, aid organizations and government agencies are planning to move more of their support services online.

"Volunteers can use FaceTime and other video apps to have a face-to-face conversation with clients," says Trevor Riggen, senior vice president of Disaster Services at the American Red Cross. He says the group has already been doing that for smaller incidents over the past couple of months.

Of course, in a major natural disaster there will still be a need for boots on the ground.

Fugate, the former head of FEMA, says it would be wise for federal agencies and aid organizations to try and source those people locally, using one of the negative outcomes of the coronavirus to their advantage.

"We already have sizable workforces idle in these communities," he says. "Unlike in 2017, when the three hurricanes hit and we were at the top of the economy ... so getting emergency workers was damn near impossible, today's a target-rich environment."

The American Red Cross is actively recruiting volunteers and offering online training for people who are interested in helping out.

This is the area that emergency officials are most concerned about. Where should people go in the event of a major hurricane, wildfire or earthquake? And how do you make sure people do leave home if they need to?

Local officials and the American Red Cross say they're going to do everything they can to avoid using large evacuation shelters.

Hotel rooms and college dormitories, many of which have been left vacant because of the coronavirus, would be the first preference. Putting people in individual rooms would allow for proper social distancing and mitigate the chances of the virus spreading.

If an emergency shelter is necessary, Riggen says, it will look very different than normal. Instead of buffet lines, meals would be delivered to people. Beds would be spaced further apart to allow for social distancing. Hygiene standards would be ramped up. Temperature checks would be conducted at the shelter door.

"We want to make sure the safety of the clients and the personnel is the top priority," he says.

Experts say it's also a good time to reassess your personal plan in the event of a natural disaster. (And if you don't have one, get on it!)

The Earth Institute at Columbia University has a nifty tool to help you identify what risks to prepare for depending on where you live. The federal government has a preparation checklist.

Perhaps you've already dipped into your emergency stash of food and supplies and need a restock. If you haven't driven in a while it's a good idea to check that there's gas in the car. And certainly a grandparent's house may not be the ideal go-to these days.

Health officials and various states are also discouraging interstate travel. Places that may have seemed like good getaways may no longer make sense.

Every day, the situation is changing in different parts of the country. Riggen says it's important to stay aware of local restrictions and keep adjusting your plans as needed.