Accessibility links
Interview: John Scalzi, Author Of 'The Last Emperox' In the last installment of Scalzi's Interdependency trilogy, a ruler must fight to save a galactic empire threatened by greed, complacency and the collapse of vital resources. Sound familiar? 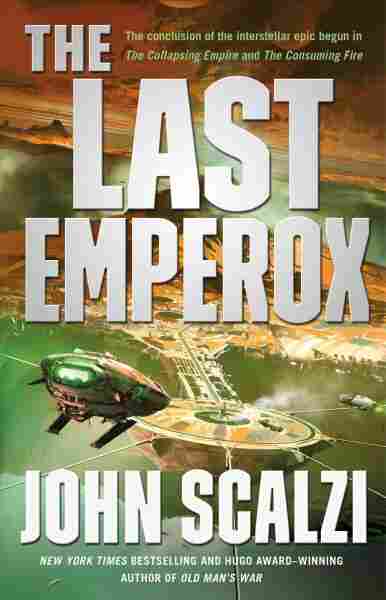 Our world has problems.

Emperox Grayland II has to fight off a coup while her inamorato — or however it's said in the Interdependency — eminent physicist Lord Marce Claremont, tries to figure out how to halt the collapse of a whole system of planets and save the worlds. Note the "s."

The Last Emperox is the latest novel — and the last in the Interdependency Trilogy — by John Scalzi, the bestselling, Hugo Award-winning science fiction novelist.

Now, the scientists of Scalzi's world knew the Flow was going to collapse — but they didn't do anything about it. Why?

"Primarily wish fulfillment and greed," he says. "The idea that, sure, this thing is going to happen. But is it really going to happen the way that the scientists and experts say it's going to happen? And even if it is happening in that way, isn't there a way that we can work it to our advantage so that when it finally does happen, we'll still be OK while everybody else is kind of in trouble?"

On being unintentionally timely

As we have gone along, so many things in the books just sort of match up in parallel with what's going on in the world. And some of that was completely unintentional ... But some of it was. I live in the world.

It is such a strange thing that when I started writing this trilogy, I first imagined it in 2014, and the circumstances of the world obviously were so different then. And as we have gone along, so many things in the books just sort of match up in parallel with what's going on in the world. And some of that was completely unintentional, it was just the pace of the story. But some of it was. I live in the world. Science fiction is written about the future, but it takes place — you know, the people who write it live now. So it is almost axiomatic that what's happening in the world now is going to affect how the stories get told.

On the powerful women of the Interdependency, and whether they act more wisely or morally than powerful men

No. And the thing about that is that I believe that, given the same opportunities as men, the same power as men, the same motivations as men, women will exhibit the same range of motivations, fears, desires as men do. But what's important is, in the Interdependency — which takes place, let's say, about 1500 years in the future --a lot of the issues of patriarchy, a lot of the issues that women have to deal with in our world right now are — if not solved, have been ameliorated through technology, through society having some advances.

On why the Interdependency still has some of our problems

The thing about it is that humans advanced technologically. We advanced in terms of our complexities of governments and society. But the human animal has been the same for the last 100,000 years. If you were to take someone from 25,000 years ago, pluck them up as a child, bring them forward and socialize them to be just like everybody else, they would be just like everybody else. We are the same animal. We're running the same software in our brains.

That being the case, 1500 hundred years in the future, humans will still have the same problems, motivations and recognizable things that they do that we have. They will still be venal. They are still going to be willing to put their immediate circle of people in front of everybody else. On the flip side, they're also going to be willing to do things that are selfless, that are generous. But the human animal is not going to change. And so what happens is we're going to still be able to relate to the people 1500 years in the future, just as we relate to the plays of Shakespeare or what's going on in the Iliad or the Odyssey — because those people, separated out, even though they are, by millennia or centuries, are still recognizable to us by what they do and how they feel.

On how he keeps all his worlds straight in his head

1500 hundred years in the future, humans will still have the same problems, motivations and recognizable things that they do that we have.

Quite honestly, if there's something in the books that I don't quite remember and I don't want to look it up, I'll just go to Twitter and ask my fans what it is. And I'll be like, what was the name of that place in the second book where I had Kiva Lagos talking to such and such character? And they will immediately answer, and having fans is really useful in that regard.

On whether, right now, it's nice to be able to spend time in other worlds

It is very much so. One of the things that is true about the age that we're living in now is that it presses in on you. It's very hard to get out of it. And for the last several years, it's been very hard to shift into that storytelling mode and to get out of this world and to go into a different one.

But I can say that once I'm in it, that there is some freedom to imagine these worlds, to imagine these characters who have completely different sets of problems. There are parallels between what's going on in the world today and what happens in the books. It's inevitable because again, I live in the world. My readers live in the world. But to some extent I have control of what's going on in these worlds. I have control of the story. Having that little bit of control makes a huge difference. And also, it's just fun to imagine. It's fun to see where we might be in 1500 years.

This story was edited for radio by Peter Breslow and Ed McNulty, and adapted for the Web by Petra Mayer