Accessibility links
Review: 'Artforum,' By Cesar Aira Aira's oddball new novella chronicles his love affair with the magazine Artforum, to which he ascribes almost magical qualities. It's a giddy, self-indulgent but delightful read.

In Cesar Aira's Latest, 'Artforum' Has A Magic Beyond The Page

In Cesar Aira's Latest, 'Artforum' Has A Magic Beyond The Page 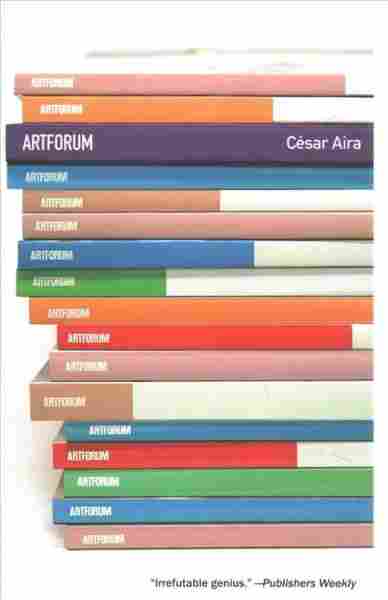 What do people do with their old magazines? I've often wondered why it is that the décor mavens of the world have not devised a clever way for me to show off my old New Yorkers the way I can my books. Piled on top of one another, they droop and ultimately slide right off. It's a nightmare. London Review of Books has a good solution: A pricey binder in which one can place old copies by curling strings around the centerfolds. The binder, then, goes on the bookshelf.

But for my old New Yorkers, I've devised a ritual that allows me to avoid thinking about them. I put copies at least a year old into a bag which I seal. I take a few days to forget about them, then throw the bag in the recycling bin.

Many people I know just let their New Yorkers accumulate endlessly. I'd happily do that too, if I hadn't many other subscriptions and didn't feel so guilty sacrificing them for old New Yorkers. I do not subscribe to Artforum, the subject and title of César Aira's newest novella — translated by Katherine Silver — but if I did, its supposed magical properties would solve a lot of my problems.

The anxious possessor of these magazines (Aira himself) realizes early on in the novella that it has begun to rain, and he has left a window open next to a pile of magazines. He rushes into the living room. "In a way, I had already foreseen the worst," he professes. On top of the pile, he sees a "sphere the size of a soccer ball ... The ball was the Artforum, its surface was the cover ... It was cold and wet to the touch, very heavy, despite being full of water. Though difficult to admit, the only explanation was that it had absorbed the rain until it had acquired the perfectly spherical shape."

Aira is unencumbered. He does what he does, and what we receive is giddy, unquestionably self-indulgent, and yet absolutely perfect.

As it turns out, though, Artforum has a strange property: All the other magazines are, somehow, perfectly dry! "Artforum had sacrificed itself to save the other magazines, like a magical and heroic soldier stepping out in front of his platoon under a barrage of firepower and receiving all the bullets in his body without letting a single one hit his companions."

What a sentence! Is there any other writer who can get away with such overshot, brazen hyperbole? Aira is unencumbered. He does what he does, and what we receive is giddy, unquestionably self-indulgent, and yet absolutely perfect. "I woke up from my reverie staring at the spherical Artforum, from which I had not moved my eyes," he writes, pontificating on Artforum as a martyr for pages on end. "Did it love me?" he asks. What a thought! Did the Eiffel Tower love the woman who married it?

Aira famously does not revise his work. He just keeps on writing. The Artforum situation opens up into a philosophical inquiry about animism and the origins of nostalgia and longing. Aira uses a sort of technique one finds not in writing workshops but in comedy improv: Take a ludicrous and specific thing. Then fashion it into a disquisition on the condition of man. Or whatever.

The silliness doesn't stop there, it blooms and creates new branches. Aira writes about how he subscribed to Artforum in the first place. The magazine sends him a personal note — "best wishes for you in Argentina" — and Aira takes this to mean that with the political and economic tumult of his country, they must have found it a bit odd that an Argentinian would subscribe to a "sophisticated art magazine." Then he waits, month after month, but the magazine does not arrive. He suspects theft at the post office, then receives a tip about old issues at a store. Finally he gets 24 copies and is euphoric. "Here I must say that pens are my only other passion that can compete in my soul with what I feel for Artforum."

'The Hare' Leads A Merry Chase

These 'Miracle Cures' Are Absurd And Delightful

Literary critics often find Aira difficult to pin down. There's an understandable struggle to understand what the shtick is all about. But for me personally, there's no need to wonder, for Aira is a remarkably direct writer. In novella after novella, he explains his motives plainly. So it happens in Artforum too:

The conclusion I hoped to reach ... with this story was the following: the most dissimilar facts can be connected in such a way that they participate in the same story, and their incoherence can become coherent. If you get a call for the wrong number, it's going to rain. If a pigeon alights on the balcony rail, there's going to be a subway strike. If a country changes its name, a relative is going to die ...There are no restrictions, there are no there are no forbidden subjects.

For a novella like Artforum, one doesn't need to reach deep into the toolkit of literary theory. Aira creates his own epistemology. It's marvelous to witness.

Ultimately, the Artforums cease to arrive yet again, and Aira descends into profound melancholy. I shan't spoil the lessons he imparts — but suffice it to say Aira departs far from the initial quandary. The only answer he does not provide is what I'm supposed to do with all my old New Yorkers.

Kamil Ahsan is a biologist, historian and writer based in New Haven. He is an editor at Barrelhouse and his work has appeared in the Los Angeles Review of Books, The American Prospect, Salon and Chicago Review.