Accessibility links
COVID-19 Death Rates Point To Racial, Urban-Rural Divisions The virus is disproportionately affecting people of color, primarily in densely populated cities. This is where the urban-rural rift also comes into play — and, consequently, a political one. 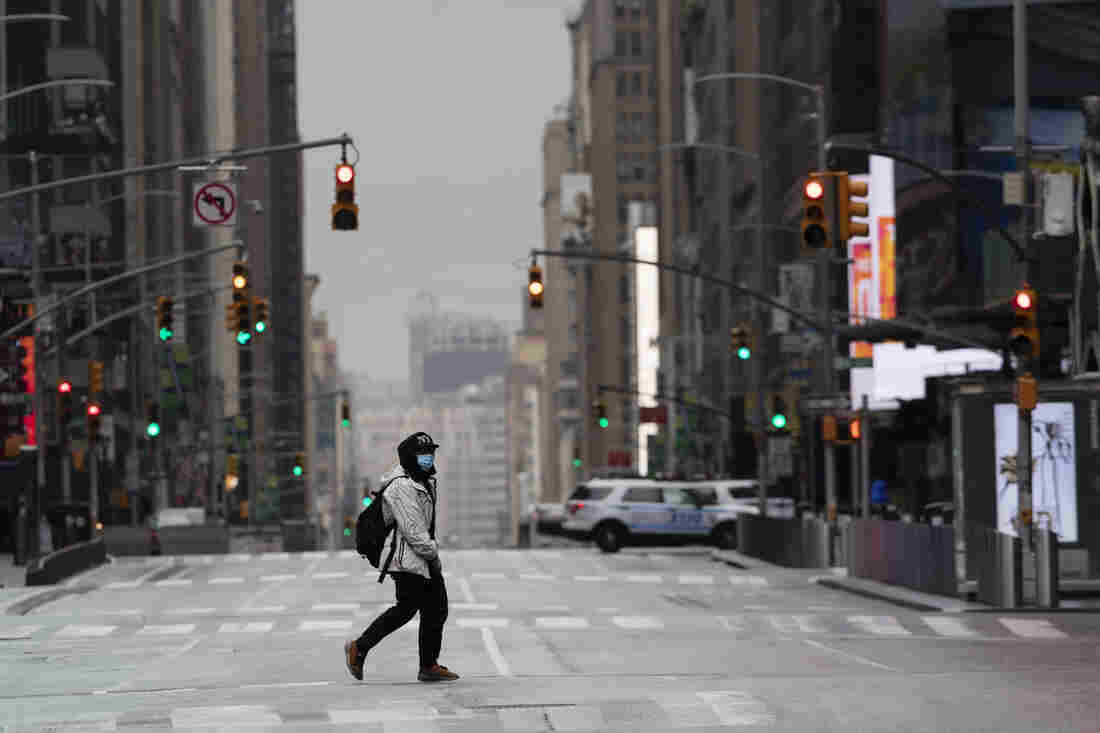 A man wearing a mask crosses the street in a quiet Times Square in New York City on April 9. The coronavirus outbreak has exposed racial divisions in the U.S. — as well as geographic ones. Mark Lennihan/AP hide caption 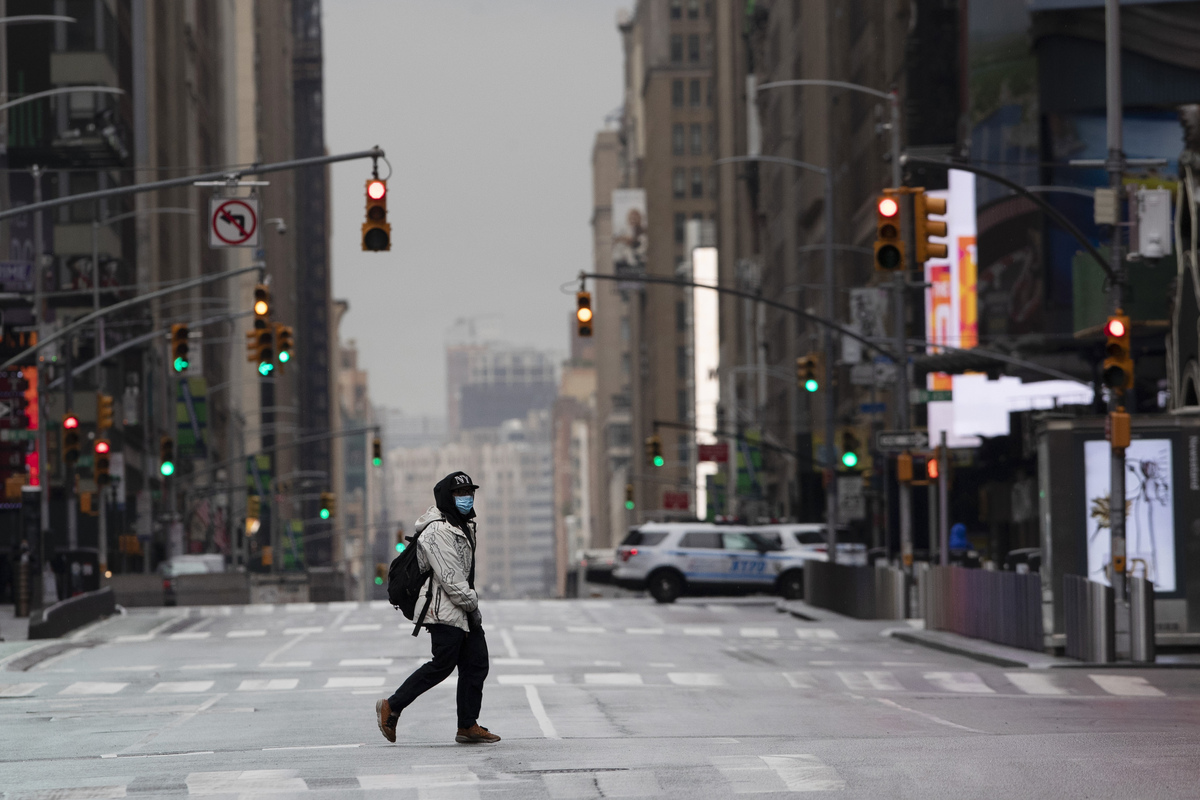 A man wearing a mask crosses the street in a quiet Times Square in New York City on April 9. The coronavirus outbreak has exposed racial divisions in the U.S. — as well as geographic ones.

Perhaps the last thing we needed in this hyperpartisan election year was another reminder of what divides us as a nation. Then the COVID-19 crisis arrived and gave us one.

The virus is affecting everyone, in one way or another, but in terms of actual sickness and death, it is disproportionately afflicting people of color. So far, at least, it is afflicting primarily those people of color who live in the most densely populated cores of our metropolitan centers.

"People of color are more likely to live in densely packed areas and in multigenerational housing situations, which create higher risk for spread of highly contagious disease like COVID-19," said Dr. Jerome Adams, the U.S. surgeon general, at the White House briefing Friday.

Adams has also noted that minorities are not more predisposed to infection "biologically or genetically," but rather they are "socially predisposed" to it.

New York City officials last week said black and Latino residents were dying at twice the rate of white people. In Chicago, more than 70% of virus-related fatalities were among African Americans — a percentage more than double their share of the population. Black residents in Milwaukee County, Wis., have seen similarly disproportionate rates.

President Trump took note of the disparity in death rates, saying, "It doesn't make sense and I don't like it" at his Tuesday briefing. The next day, he called the disparity "terrible" and added, "We are doing everything in our power to address this challenge."

It is a large challenge. Disadvantaged people have long been found in the most densely populated cities and neighborhoods, confined there by economics, but also by deliberate policies of businesses and governments.

The people most at risk tend to live in crowded quarters and take public transit to jobs deemed essential or impossible to do from home. Preexisting health problems, also often related to living conditions, can make the virus more likely to be fatal.

But even as public officials last week decried the racial disparity and its link to social conditions, the emergence of the issue also had a perverse effect. It apparently made it easier for some people living farther away to see the virus as someone else's problem.

That is where the issue of racial disparity in death rates highlights the overall difference in the way America is experiencing COVID-19. And that difference largely follows the dividing line between urban and rural America.

So far, at least, the disease is hitting us where we live, and this is primarily in the big cities. For those outside the major population centers, the impact is less immediate, and the sacrifices being asked of them often seem out of proportion.

That message can also be heard in the president's briefings, as when he resists suggestions that there should be a 50-state shutdown by saying, "Parts of our country are very lightly affected" and mentioning states such as Nebraska, Idaho and Iowa.

The president has held to this view despite the openness to that approach by his own medical advisers, such as Dr. Anthony Fauci, director of the National Institute of Allergy and Infectious Diseases — the man whom, according to polls, Americans trust most in this crisis.

Recent data also show that while cases may not currently be as high in rural areas, they are growing — and there is concern that these areas will not be able to handle the strain on their health care systems.

Despite the threat to all Americans, and while the crisis is causing many to sacrifice and serve, the sentiment of "we're in this together" is not shared in all parts of our body politic. And that should not surprise anyone who has followed the increasing polarization in our national attitudes and voting behavior.

The racial aspects of this divergence, demonstrated in the current viral crisis, are a salient element in a larger trend toward disunity in America. We typically talk of polarization in terms of "red states" and "blue states," Republicans versus Democrats, right versus left, your cable TV news channel versus mine. But it is also largely a matter of population density.

The nearness of your neighbors can be highly predictive of your likely political leanings, says Will Wilkinson, vice president for research at the Niskanen Center, a Washington think tank named for a former chairman of the libertarian Cato Institute. Wilkinson has written a monograph called The Density Divide.

"The pull of urbanization has segregated us geographically ... so thoroughly that Democratic vote share now rises, and Republican vote share drops, in a remarkably linear fashion as population density rises."

In other words, the closer one lives to the epicenter of a major metropolitan area, the greater the chances that the person votes for Democrats. Just as reliably, of course, moving away from the epicenter dramatically increases the chances that a person votes for Republicans. Wilkinson's maps show these tendencies to be so routine and so pronounced as to be almost comic.

This dynamic holds not only for the mega-metros but for medium-sized and small cities as well. The people who choose to move "into town" or "head for the bright lights" are often seeking higher education or greater economic opportunity, Wilkinson says, or they are self-sorting as individuals attracted to what cities have to offer — including diversity.

Those who stay in more rural areas constitute "a lower-density, mainly white population that is increasingly uniform in socially conservative personality, aversion to diversity, relative disinclination to migrate and seek higher education, and Republican Party loyalty."

Reaching these voters was a key element of Trump's campaign strategy in 2016, both in the primaries and in the general election. From his earliest rallies, he focused on the non-metro Americans he would later salute in his inaugural address — "the forgotten man, the forgotten woman."

The trend toward Republican loyalty outside the nation's metro areas has been noted for some time. The 19th-century Democrats were a rural party as far back as Thomas Jefferson and Andrew Jackson, and that bond was renewed in Franklin Roosevelt's New Deal. But in recent decades, the party of Jefferson and Jackson has struggled with outreach beyond its growing base in the cities.

In the first decade of this century, NPR's rural specialist, Howard Berkes, reported on how Republicans were building supermajorities of the vote outside the metro areas that accounted for George W. Bush's presidential victories in 2000 and 2004. Residents of less populous areas were often opposed to environmental regulation, gun control, abortion, same-sex marriage and secularism in general.

Population density is also political because the Constitution features a low-density bias that gives disproportionate power to less populous states. The Founders negotiated a deal that split Congress in two, with one chamber based on population (the House of Representatives) and one that was not (the Senate). In the Senate, with all its special powers, the less populous states would always have clout disproportionate to their size.

While this arrangement has endured for 230 years, it is under ever greater strain as the disparity between the populous and less populous states widens.

The diversity means the problems of sheer numbers become complicated by the issue of race. The racial divisions become the face of the urban-rural divide that has been with us since the nation's founding.

Defenders of the original Constitution and its view of states' rights argue that the non-proportionate Senate still makes sense or that it can be amended through the usual process. But a constitutional amendment requires three-fourths of the states to agree to it, meaning it can be blocked by as few as 13.

This means that urban-rural conflicts, often with a racial component, will increasingly be seen one way in the House and a very different way in the Senate. We are already seeing this play out with the managing of relief bills in the current crisis.

The radically different experiences that populous and less populous states are having with COVID-19 — and the federal response to it — offer a glimpse into our political future.