Accessibility links
Afro-Colombian Music Offers Youths A Rhythmic Alternative To Drug Gangs Currulao combines drums and marimbas and is popular along the country's Pacific coast where most of the population is Afro-Colombian. One verse goes: "We no longer have peace in our paradise." 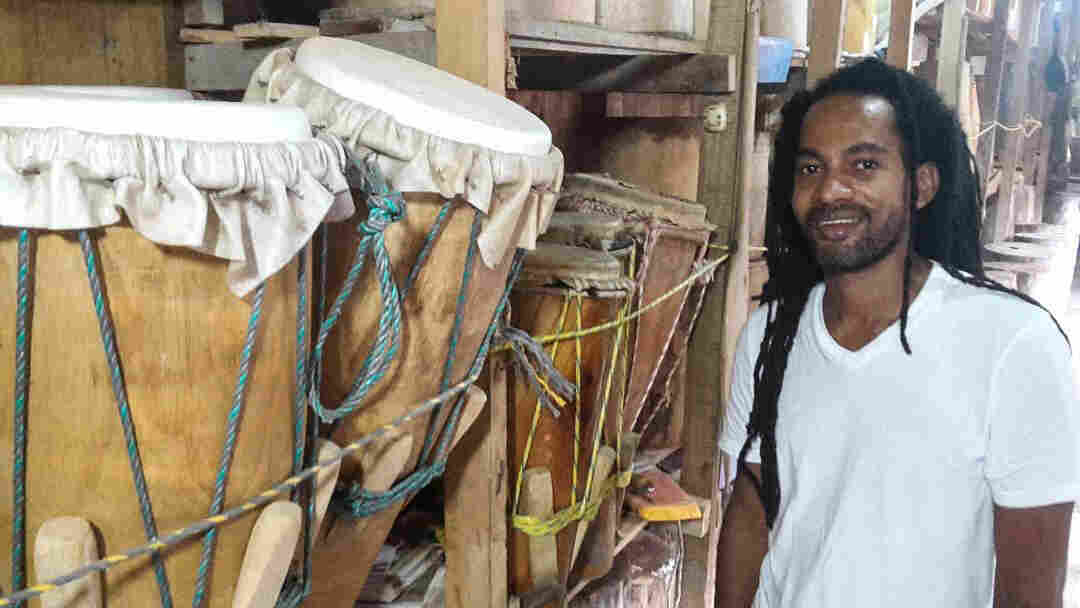 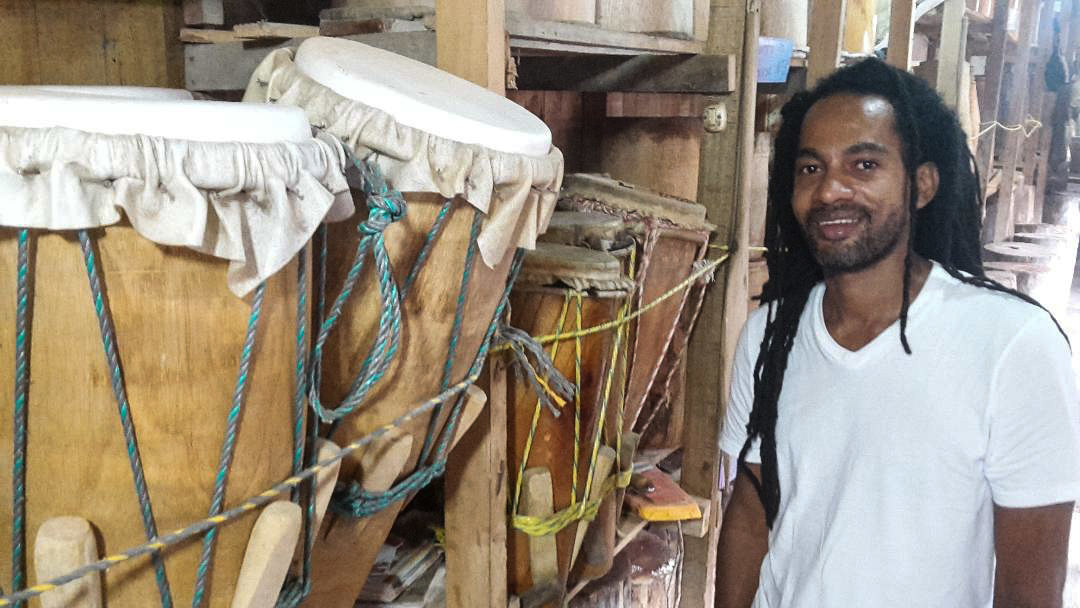 Harold Tenorio is the director of a folk music school in Tumaco, Colombia.

An acoustic folk music developed by his enslaved ancestors along Colombia's Pacific coast helped to keep John Jairo Cortez on the straight and narrow.

While growing up in the crime-ridden town of Tumaco, cocaine smugglers killed his father and Cortez says he was "tempted" to join a rival gang to avenge the murder. Instead, he was lured into another local industry: currulao.

Pronounced koo-roo-LAO, the music combines drums and marimbas and is popular along the Pacific coast, where most of the population is Afro-Colombian. Cortez learned to play the marimba at a currulao music academy for youngsters, many of whom are at risk of getting sucked into Colombia's underworld.

"This project is really important," says Cortez, 35, who now teaches at the academy, known as the Southern Pacific Folk School. "It shows that kids in the barrios can escape the violence."

Amid the COVID-19 outbreak, the music classes have been suspended. But once Colombia's nationwide lockdown ends, some teachers at the academy predict that even more kids will take up currulao as an antidote to their forced confinement.

Currulao was invented by African slaves who were first brought to Colombia in the 1500s to cut timber and mine gold.

Initially, the lyrics often dealt with the wonders of the natural world. But in recent times, currulao songs have come to reflect the region's status as a violent hub for drug traffickers.

One song, a favorite of the kids who were practicing at the folk school just before the coronavirus outbreak, describes how local farmers have replaced traditional crops like coconuts and yams with coca leaves, the raw material for cocaine. "As a result," the kids sing, "we no longer have peace in our paradise." 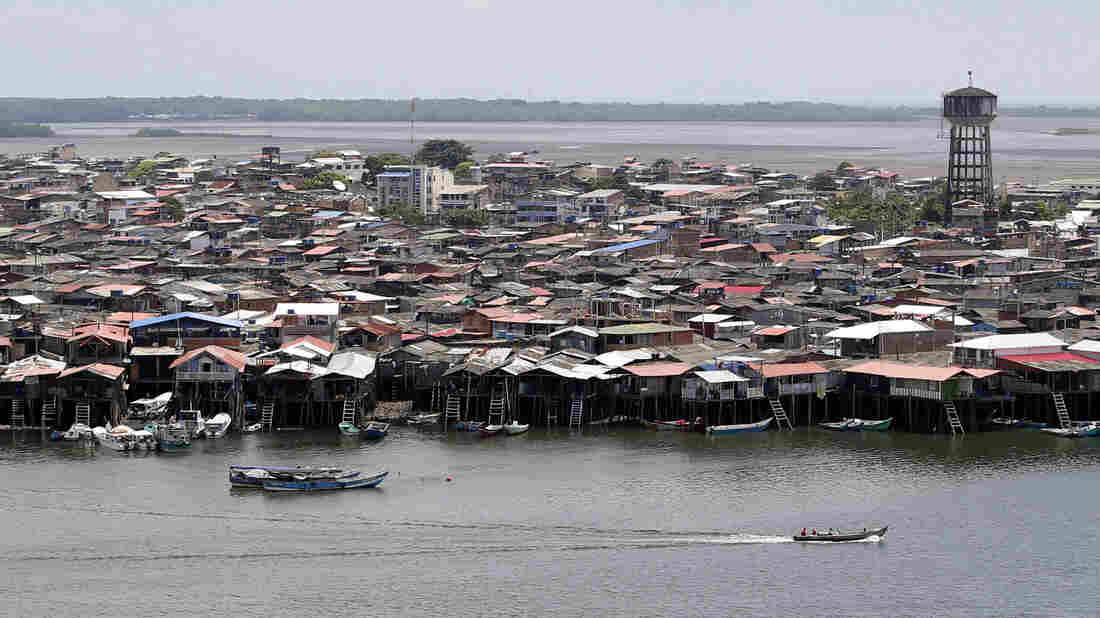 Boats cruise along Tumaco in southern Colombia. An investigation by Human Rights Watch in 2018 found that former guerrillas were waging a brutal campaign of violence in the port city, fueled by booming coca production, a lack of basic infrastructure and disillusionment with the country's peace deal. Fernando Vergara/AP hide caption 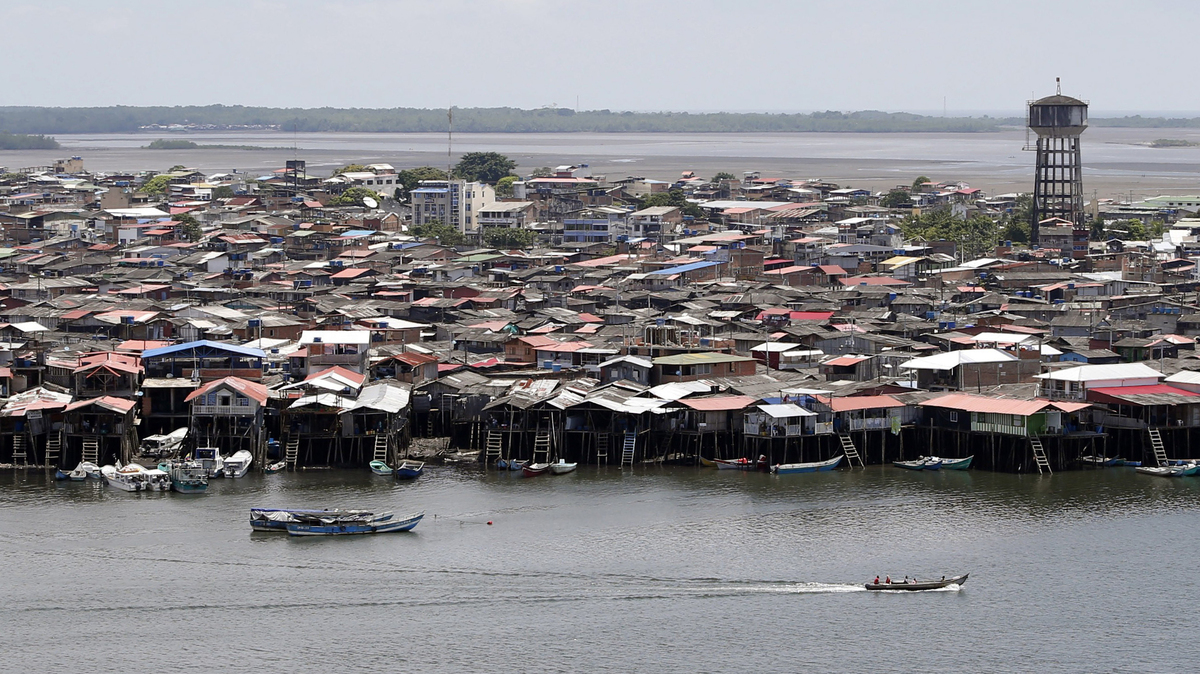 Boats cruise along Tumaco in southern Colombia. An investigation by Human Rights Watch in 2018 found that former guerrillas were waging a brutal campaign of violence in the port city, fueled by booming coca production, a lack of basic infrastructure and disillusionment with the country's peace deal.

In truth, Tumaco seems far from paradise. It's a network of overcrowded and violent slums sprawling across several islands just off the Pacific coast. Analysts say that the region, close to the Ecuadorian border, has long been ignored by the Colombian government, which is based in the Andean mountain city of Bogotá.

In recent years the Pacific region has become a jumping off point for fast boats and submarines taking tons of cocaine to Mexico and the United States. Traditional drug trafficking groups as well as former Marxist guerrillas, who demobilized under a 2016 peace accord but have since rearmed, now battle for control over smuggling routes.

"Colombia's Pacific is struggling to cope with conflict and violent crime festering amid extremes of poverty, squalor and neglect," said a 2019 report by the International Crisis Group. "New and old armed groups battle for control over communities, territory and illegal business, triggering ongoing displacement and low-intensity warfare."

Besides fishing and farming, there are few legal jobs in the area, which is why Tumaco has one of the highest unemployment rates in Colombia. Less than 1% of the region's students go on to college, while many teenagers drop out of high school to work in the cocaine trade.

Among the few who managed to break away is Harold Tenorio. After studying anthropology in Bogotá, the Colombian capital, he won scholarships to study music and contemporary dance in Burkina Faso and France. Yet even while absorbing the beauty of Paris, Tenorio felt the tug of his homeland.

"I felt very bad living abroad and hearing about everything that was happening in Tumaco," says Tenorio. "Rather than running away from problems, we have to resolve them."

That's why he returned home four years ago and became a director at the Southern Pacific Folk School, which was founded by his father, a folk dancer. About 80 students, the youngest age 5, attend the school and those who come from troubled homes can stay overnight. The school is also home to a workshop where the kids learn how to carve marimbas, fashion drums from tree trunks and make percussive shakers from bamboo and seeds.

By attending the school, "kids use their free time making music rather than hanging out on the streets," says John Mosquera, 15, who is learning to play a traditional drum called a cununo.

"It helps to keep the kids focused," adds Tenorio, 42, who wears shoulder-length dreadlocks.

Besides working at the music academy Tenorio plays electric bass with a band he formed called Plu con Pla. That's slang for a local dish that combines fish with plantains and symbolizes the band's fusion of curralao, reggae and hip hop.

The group's best-known song, "No Más Velorio," decries the street violence and the growing number of premature deaths in Tumaco.

But amid the new coronavirus scare, Plu con Pla has taken on a new mission. With performing in public out of the question, the band has released public service announcements on social media, set to rhythms of currulao, urging Colombians to keep their distance from one another and to stay home.