Why Lido Pimienta Had To Become Her Own 'Miss Colombia'

Why Lido Pimienta Had To Become Her Own 'Miss Colombia' 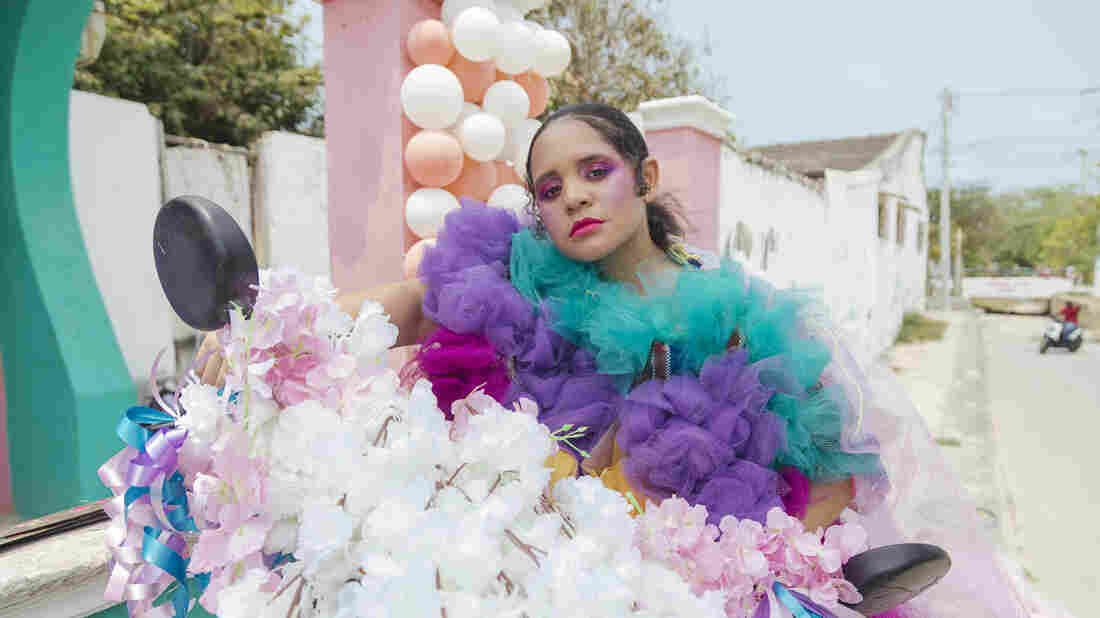 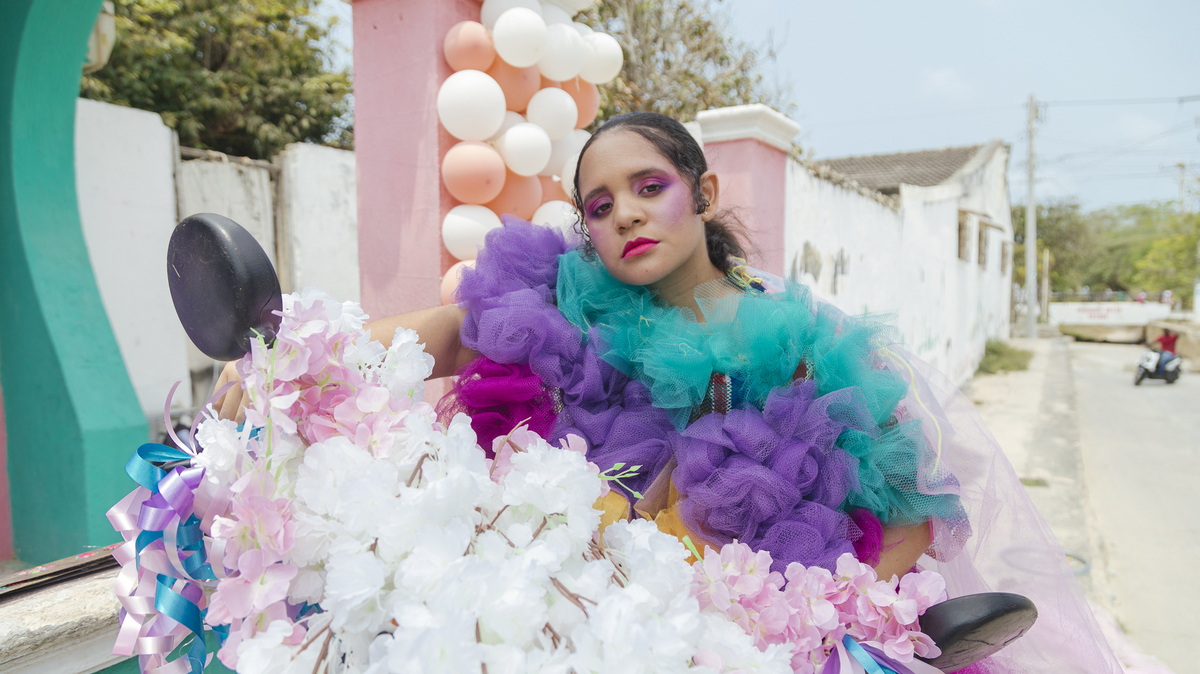 Daniella Murillo/Courtesy of the artist

How we're trained to see beauty can be ugly. After three weeks in total isolation during the coronavirus pandemic, the Toronto-based Lido Pimienta, originally set to perform at SXSW and tour around the release of the new album Miss Colombia, fills her time with art projects: ceramics, painting and making one-of-a-kind record sleeves. Trained as an art critic, she evaluates the world outside with a searching eye. "I need to continue my work and at least be someone who puts beauty out there when there's so much ugly," she tells NPR.

Miss Colombia — which deftly mixes folk genres like cumbia, bullerengue and porro with modern and orchestral production — takes a thread and needle from Pimienta's heart to a country that doesn't always love her back. Beauty pageants don't often celebrate women like Pimienta, a Black Colombian woman of African and Indigenous Wayuu descent. On the album cover, Pimienta mirrors the classical tropes of the idealized Colombian woman in the stance of the Virgin Mary. She originally thought to recreate the sexed-up covers of the 14 Cañonazos Bailables series (think of it as Colombia's ancestor to Now That's What I Call Music), but opted for a Catholic image instead, exposing sinister intent under the guise of holiness.

"It starts when you get baptized and then you get your first communion," she explains of the anti-Blackness that young Colombian women internalize. "You become this perfect lady when you get your hair straightened for the first time. Strike one: You look Black. You got that Black blood in you. We need to thin that s*** out. Don't be in the sun, straighten your hair, and put on this white dress for your first communion. You gotta look beautiful for the priests."

She laughs. "So I was like, how can I make a gay version of a wedding dress?"

She calls Miss Colombia "a cynical love letter to Colombia," a more intentional, focused project than her experimental, Polaris Prize-winning 2016 album La Papessa. "It's not just about me," she says. "It encompasses the collective feeling [of a people] that is just f****** tired."

The catalyst: Steve Harvey mistakenly announced that the crown of the 2015 Miss Universe pageant would go to Miss Colombia instead of Miss Philippines. The pageant-watching world took to their torches, claiming that Colombia's women were the most beautiful — more deserving than Miss Philippines could ever be, in their eyes. Pimienta remembers the racist slurs leveled at Harvey and Miss Philippines and the shame she felt for her country. "That was the moment that my blindfold came off," she says. "Am I even Colombian when I don't share the same feelings?"

Five years after she left her hometown of Barranquilla for Toronto and began travelling back regularly, Pimienta says she became "the Colombian Larry David," observing a country whose social norms and behavior now seemed alien, from how closely people stand in line to one another to the particular nature of its catcalls. "You have to be okay with all these things that are so f***** up because violence is so present. And being scared is just everyday bread in Colombia," she says. Why was Colombian mainstream culture so up in arms about a pageant when thousands of Wayuu children have died from lack of access to food and water in the Guajira Peninsula?

Pimienta orchestrates the relationship between beauty and violence across 11 songs with two choral bookends: These "transcriptions" — labeled SOL and LUNA — turn past pain and trauma into a lexicon to remember, learn and heal. The album's first half is a healing wash of Pimienta's signature electronic cumbia blend. When Pimienta wrote the record, she first composed it for voice, brass and woodwinds alone. Co-producer Prince Nifty then introduced the beats with his meditative production, as on the searching "Eso Que Tu Haces," whose cumbia and porro rhythms give a historical framework to the lyric's call-out of abuse disguised as love.

This meeting of old and new illustrates historical cycles of pain with modern references. "No Pude" takes the singsong melody of "My Favorite Things" and throttles the chorus with hard synth and drums. "Te Queria" thrums with steel pan and clarinets under her alternating refrains of "Yo te miraba también" and "Yo te boté," a wink at the explosive 2017 reggaetón hit.

On "Nada," Pimienta finds a vocal and visual double in Bomba Estéreo's Li Saumet. The video portrays Pimienta and Saumet, draped in lace, with babies on bended knees in the jungle, their hair braided together into one, uniting them. The image recalls Frida Kahlo's Two Fridas, though Pimienta explains that she's been contemplating and drawing the image of the two sisters with one braid for years. Their bond is the intergenerational trauma of motherhood: "Pues soy mujer y llevo / El dolor adentro," the women sing. "Soy mujer de lluvia, de sangre en luna / De tierra, sal y duna / Por amor, sin duda." "Coming Thru" then returns to an acoustic woodwind, choral, and brass arrangement through which Pimienta's voice carries a lucid recognition of emerging from loss.

Then, the album pivots to San Basilio de Palenque, the oldest surviving town founded by freed enslaved Africans in the Americas. A spoken interlude by Rafael Cassiani Cassiani, the bandleader of Palenque's Sexteto Tabalá, immortalizes the story of Tabalá's formation in Cassiani's own warm costeño lilt. As a teenager in Barranquilla, Pimienta remembers the first time her cousin knocked her out of her Radiohead- and Portishead-driven music habits with a Sexteto Tabalá CD and a question: "Why do you spend so much time listening to depressed white people when you have so much culture right where you live?"

She became obsessed. Through him and his dance Grupo Kumbe (featured in the "Eso Que Tu Haces" video), she went to Palenque for the first time and was introduced to Tabalá. She began singing with them. "Quiero Que Me Salves" is a spiritual appeal grounded in the land that's been shaped by Afro-Colombian resistance. The track that follows, "Pelo Cucu," on natural Black hair, is a feminine manifestation of self-preservation in the face of glossy, industrial Colombian erasure.

"Resisto y Ya" is Pimienta's last statement song on the album, and it means what she says: I resist, and that's it. "There's this weird pressure that brown artists have to be spokespeople," she says; to go to every march and lift each middle finger in the name of activism. As a queer, Indigenous, Afro-Colombian mother, Pimienta determines the path of her own resistance. "The mere fact that I have to walk in this body and be judged by just the way that I look is resistance," she says. And when it comes to conveying that resistance in her art, she notes that in an already small pool of Afro-Latina artists being recognized for their music, the privilege within restrictive activist expectations is especially apparent.

On "Para Transcribir (LUNA)," she returns to the same melody that opens the album. Except this time, she chooses not to forget pain and allows herself to be happy. She is no longer one voice, but a choir of her own vocals. She trades willful forgetfulness for healing through accepting the fullness of her memory.