Accessibility links
The World's End Is A State Of Mind In Mark O'Connell's 'Notes From an Apocalypse' In charming, anxious, tender essays, writer Mark O'Connell examines his own apocalyptic frame of mind by taking "a series of perverse pilgrimages" to subcultures preparing for the end of the world. 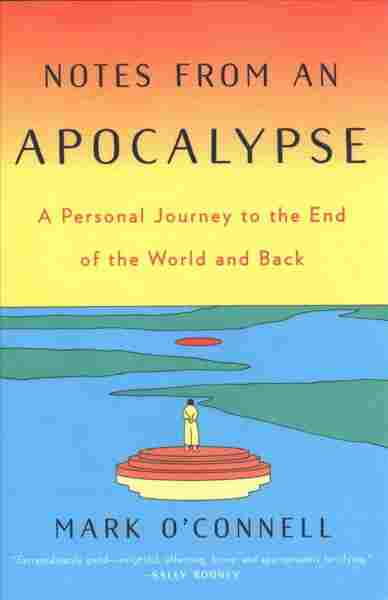 Mark O'Connell's new book about the end of the world is not called Notes from the Apocalypse, but rather Notes From an Apocalypse — a gesture of articular modesty that points to a larger truth: Despite the climate crisis, despite a global pandemic, it has always been "the end of the world for someone, somewhere."

W.H. Auden wrote in his poem "Musée des Beaux Arts" that even the most epic suffering happens "while someone else is eating or opening a window..." and the dogs are going on "with their doggy life." But the apocalypse promises to synchronize our private doomsdays into one grand event.

O'Connell has a self-diagnosed "tendency toward the eschatological": the end of the world is too much with him. In a chain of charming, anxious, and tender essays, O'Connell examines his own apocalyptic frame of mind by taking "a series of perverse pilgrimages" to subcultures devoted to preparing for the end of the world.

Apocalypse comes from the Greek word for revelation: In religious contexts, it means the uncovering of sacred truth. The Christian apocalypse promises to distinguish the virtuous from the vicious. O'Connell's book shows how any of our likely earthly apocalypses — fire, famine, flood — will distinguish, instead, the rich from the poor.

In South Dakota, he visits a complex of luxury survivalists' bunkers that will boast armed security guards, "a logical extension of the gated community" and "a logical extension of capitalism itself." In Los Angeles, O'Connell attends a conference on the colonization of Mars; in New Zealand, a favorite destination for billionaires looking to build mansions for the end times, he hikes to PayPal founder Peter Thiel's apocalypse house and drinks from his lake. He also goes on a grimly funny group tour of the Chernobyl Exclusion Zone and embeds with the Dark Mountain group in the Scottish highlands.

Each of these apocalyptic scenarios holds its own revelation: the segregating power of wealth; the anxieties of masculinity; the loneliness of feeling alienated from nature. For O'Connell personally, the apocalypse is a way of thinking of the terrifying tenderness of having children, his fear of death, and also his odd longing for it.

Because one advantage of the apocalypse is that when it happens, you can finally stop thinking about it: "The apocalyptic sensibility, the apocalyptic style, is seductive because...it vaults us over the epistemological chasm of the future, clear into a final destination, the end of all things. Out of the murk of time emerges the clear shape of a vision, a revelation, and you can see at last where the whole mess is headed. All of it — history, politics, struggle, life — is near to an end, and the relief is palpable."

O'Connell is interested in the feeling of apocalypse, not its precise mechanics. He rarely bothers with perfunctory explanatory glosses, the whowhatwhenwhere writers usually have to do before the more interesting why. His chapter on visiting Chernobyl, hilariously, never stops to explain what exactly happened there (nuclear catastrophe, Soviet Ukraine, 1986). He also does not attempt to explain the science behind climate change. (Actually, he does in one instance ask an expert, "Are we f***ed?" The expert confirms: Yes, we're f***ed).

O'Connell takes for granted that we feel as he does, that apocalypse is just in the air. When his therapist asks what he thinks of Steven Pinker, a psychologist who argues that, in fact, there has never been a better time to be alive, O'Connell does not even consider this proposition. Instead, he begins to mentally spiral. Does Pinker's spectacular hair, a "mane of silver ringlets," constitute "great hair or terrible hair" he wonders, before ultimately deciding for the latter.

As his therapist waits, O'Connell continues: "It struck me then..how odd it was that so many of the great pessimistic thinkers had, by contrast, terrific hair. I thought of Samuel Beckett, with his incomparable steely crest and his pitiless vision of a meaningless existence...And then there was Kafka himself, with his great partitioned dome of jet-black hair, established above his high forehead like an auxiliary brain. It was interesting, I thought, how these men managed to maintain both punctiliously styled hair and unremittingly bleak views of human existence."

"What's coming up for you?" asked his therapist. "Nothing much," he replies.

This is, of course, a winning and unabashed way of getting out of engaging with Pinker's ideas; but it's also O'Connell's way of showing us that he is as interested in apocalypse-mind — scattered, guilty, and anxious, making meaning out of meaningless things — as he is in the reality or un-reality of the apocalypse itself.

In fact, O'Connell is frantic with meaning-making, like one of those medieval Christian mystics who saw the rapture portended in every pebble, every bird. In this state of paranoid pareidolia, everything is a sign, not only Steven Pinker's hair, but planes, deer, birds, the conveyor belt at the Heathrow outpost of Yo! Sushi. "I couldn't sneeze without thinking it was a portent of end times," he writes.

But when visions of sword, famine, plague, etc. threaten to overwhelm him, O'Connell's wife reminds him that he is "not John of Patmos, and this was not some cave of island exile: this was a house, and people were trying to live in it."

Here, O'Connell is being characteristically self-deflating, but he is also drawing an important distinction between the realm of the cave — or bunker, or Mars habitat, or island mansion — and the realm of the house, the small one in Dublin full of people he loves.

O'Connell has two children; before they were born, he agonized over whether it was ethical to bring more children onto this warming planet. Once the children arrive, the question seems ridiculous. They are here, incontrovertible, inarguable. He is rapt watching their joy and curiosity, not tracking "the pitter-patter of tiny carbon footprints." Of course, no one will live forever (this is, in fact, the subject of his previous book, on transhumanism). Apocalypses have come before, and will come again. We are all obviously f***ed in the scheme of things; Notes from An Apocalypse is just a reminder to ask what else we can be — and for whom — in the meantime.