Accessibility links
Trump To Name New Coronavirus Advisers On Reopening The Country President Trump said he would announce on Tuesday who would help him decide when to ease up on social distancing guidelines meant to mitigate the public health impact of coronavirus.

Who Will Advise Trump On 'Reopening' The U.S.? White House To Set New Pandemic Council

Who Will Advise Trump On 'Reopening' The U.S.? White House To Set New Pandemic Council 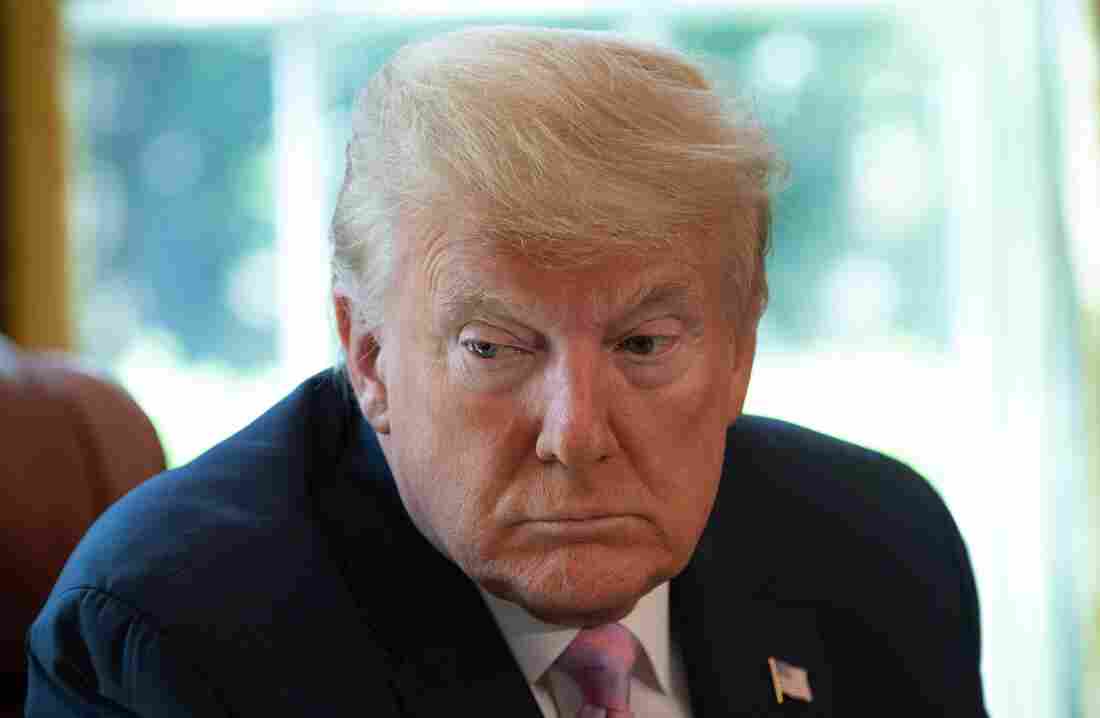 President Trump, pictured during an Easter blessing in the Oval Office on Friday, is set to announce a new advisory council to help him decide when and how to reopen the country for business. Jim Watson/AFP via Getty Images hide caption 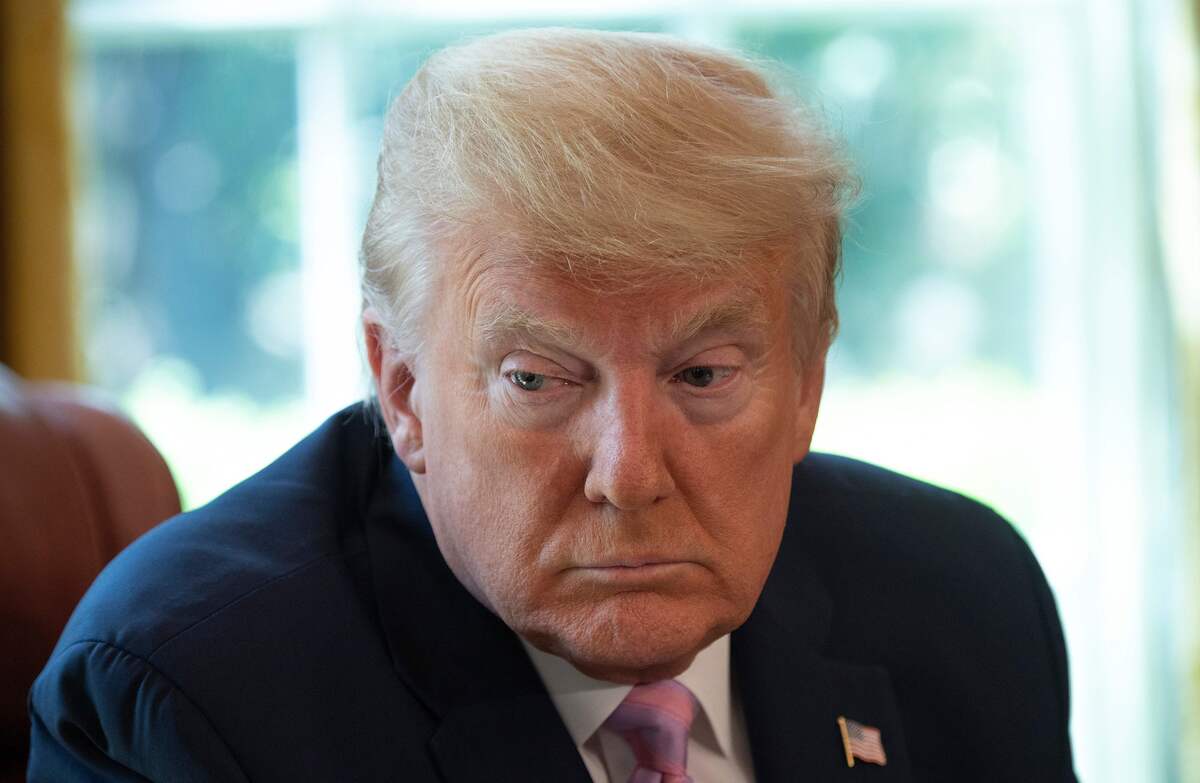 President Trump, pictured during an Easter blessing in the Oval Office on Friday, is set to announce a new advisory council to help him decide when and how to reopen the country for business.

President Trump is expected to specify officially on Tuesday who will help him decide when — and how — portions of the country can get onto a path to normal after the coronavirus disaster.

Trump has said the choices associated with that goal may be the most consequential he'll make as president. He made clear on Monday that he considers them his to make, not those of the council, local officials or state governors.

....It is the decision of the President, and for many good reasons. With that being said, the Administration and I are working closely with the Governors, and this will continue. A decision by me, in conjunction with the Governors and input from others, will be made shortly!

"The president of the United States calls the shots," Trump said in Monday's task force briefing.

The president's claim to authority over states' actions is complicated by orders from some officials — such as Virginia Gov. Ralph Northam, a Democrat — who have imposed social distancing and other countermeasures for much longer than the federal guidelines.

It's also unclear who precisely Trump will name, how many people he'll invite and what kind of backgrounds the White House is seeking.

FACT CHECK: Trump Doesn't Have The Authority To Order States To 'Reopen'

A list of prospective councilors reported Monday by Fox News was heavy on administration officials and economic specialists. The report did not include anyone from certain groups that Trump has previously said he wanted to involve.

The president also said Monday that he intended to appoint a number of committees to advise him — including a "transportation committee, a manufacturing committee" and a "religious leaders' committee."

While Trump declared his "total" authority on the matter, he also said on Monday that he would prefer to work with states on the issue of reopening the country.

When asked Friday if he would invite governors to participate in his advisory council, Trump said, "I think we're going to put some governors." He then named Democratic governors specifically, mentioning what he called the good relationships he's formed with New Jersey Gov. Phil Murphy and California Gov. Gavin Newsom.

When Could Things Reopen? How Each State Is Responding To COVID-19

The prospect for contributions by the governors reflects the complexity of the problem the White House and public health officials are tackling.

The pandemic in the United States is a collection of many smaller epidemics moving along at different rates of speed and intensity.

The New York City metropolitan area, with the most cases and most deaths, is afflicted much worse than the mountain West. And in places such as the greater Washington, D.C., area, officials and models don't agree on when potential peaks of infections might arrive.

Murphy joined with other Northeastern governors on Monday in forming what those leaders called a council of their own to assess how New Jersey, New York and other states worst hit by the pandemic might get from the current near-shutdown to a normal state.

"We cannot act on our own," Murphy wrote. "We must be smart & tactical in how our region comes out of this, or else we'll be right back to square one."

BREAKING: NJ, NY, CT, PA, DE, and RI have formed a regional advisory council to help guide our re-opening once the #COVID19 emergency has passed.

We cannot act on our own. We must be smart & tactical in how our region comes out of this, or else we’ll be right back to square one. pic.twitter.com/fZeOk3GBca

Newsom, meanwhile, issued a similar announcement on Monday with the leaders of his neighboring states.

"We are announcing that California, Oregon and Washington have agreed to work together on a shared approach for reopening our economies — one that identifies clear indicators for communities to restart public life and business," Newsom said in a statement with the other governors.

The state-led announcements seemed to upset Trump. On Tuesday morning he tweeted that New York Gov. Andrew Cuomo had been calling "daily, even hourly, begging" for supplies.

"I got it all done for him," Trump wrote, "and everyone else, and now he seems to want Independence! That won't happen!"

Dr. Anthony Fauci of the NIH, who is on the existing coronavirus task force, said in Monday's briefing that reopening the country will not be like turning on a "light switch."

"As we discuss and consider the public health aspects, it likely would be something I refer to as sort of like a rolling reentry," he said. "It won't be one-size-fits-all."

While there have been sparse confirmed details about whom Trump plans to surround himself with, the president has put a few things on the record about the outlook for the coming weeks.

One is that the president wants to consult with his advisers via teleconference, rather than asking them to travel to the White House or Washington — a concession to the continued need for social distancing amid the national efforts to mitigate the spread of the coronavirus.

Another is that, thus far, Trump isn't committed to a May 1 date by which he might lift recommendations for social distancing and other countermeasures, or even a May time frame.

How To Get Your $1,200 Emergency Payment Faster — But Watch Out For Debt Collectors

Outside commentators such as Fox host Laura Ingraham have called on Trump to give that as the definite date by which at least parts of the United States can start to get back to business.

Social distancing has meant atrophy for big sections of the economy and delivered grievous effects to restaurants, brick-and-mortar retailers, travel and energy.

Unemployment levels are stratospheric, and the longer social distancing remains in force, critics warn, the worse the damage to the nation and the more risk of prolonged problems for the economy.

For a time, Trump and Vice President Pence had a vision in which the United States could both try to respond to the crisis of the pandemic and reactivate portions of the economy, but they changed their tack in view of the magnitude of the crisis, following the advice of public health officials.

At the end of March, the administration extended what had been 15-day social distancing guidelines for an additional month.

And although the president repeats how much he'd like to help bring about a return to normalcy as soon as practical, he hasn't committed to doing so by a specific date.

"I would love to open it, but I'm not determined about anything," Trump said on Friday. "The facts are going to determine what I do. But we do want to get the country open. So important."

He said he expects to make recommendations "fairly quickly."

"We're very close to completing a plan to open our country." pic.twitter.com/xnV4XxwnjL