Accessibility links
Where Did The Coronavirus Start? Virus Hunters Find Clues In Bats : Short Wave Bats are critically important for ecosystems around the world. But they also harbor some of the toughest known zoonotic diseases, and are the likely origin point for this coronavirus. Short Wave reporter Emily Kwong talks about leading theories on where this coronavirus came from, the work of virus hunters, and the rise of emerging zoonotic diseases.

12:23
Where Did This Coronavirus Originate? Virus Hunters Find Genetic Clues In Bats 12:23 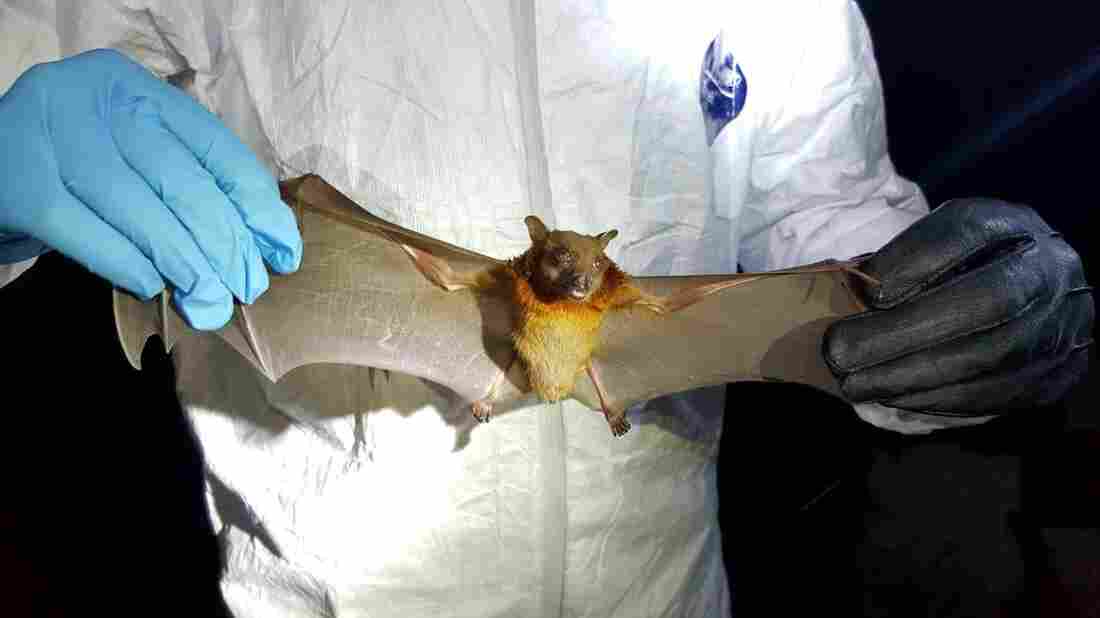 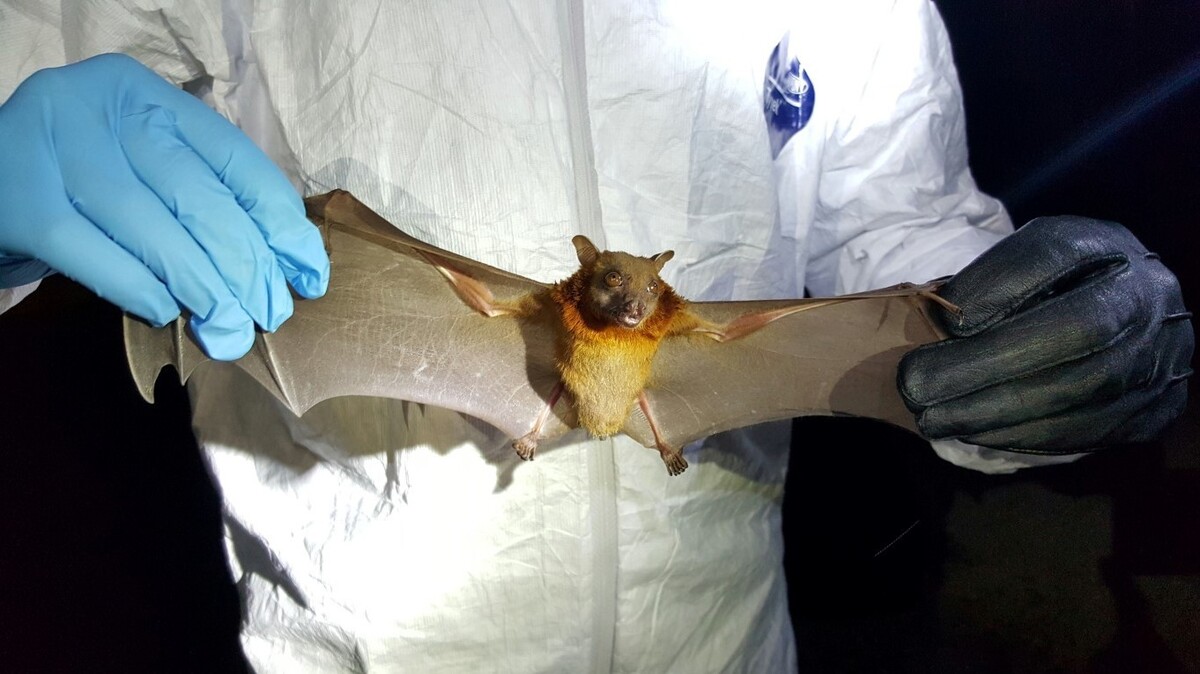 Dr. Linfa Wang, a virologist at the Duke-National University of Singapore, has been working around the clock to help Singapore fight this coronavirus. He hasn't hugged his daughter in over two months.

"We're in a war zone right now. Everything comes to me very fast," Wang said in an interview with NPR's Short Wave podcast. He's given over 100 interviews since January, when international reports first surfaced of a new coronavirus.

Since then, scientists have learned a great deal about the coronavirus, now called SARS-CoV-2. And one of the mysteries they're still trying to untangle is where the virus came from in the first place. Scientific evidence overwhelmingly points to wildlife, and to bats as the most likely origin.

Wang is an expert in emerging zoonotic diseases, or diseases hosted in animals that spread to humans. The CDC estimates that six out of ten infectious diseases in people come from animals. Among them are Lyme disease, Rabies, West Nile, and diseases caused by coronaviruses, including this coronavirus and the SARS virus.

The 2003 outbreak of SARS was eventually traced to horseshoe bats in a cave in the Yunnan province of China, confirmed by a 2017 paper published in the journal Nature. It was a detective hunt that took over a decade, sampling the feces, urine, or blood of thousands of horseshoe bats across the country and seeing if those samples are a genetic match to the virus.

The work of virus hunting — of tracking an outbreak to its origin point — can take years. Wang stresses that pinpointing the true origin of this coronavirus will take time as well. "Of course, the technology and everything is much more advanced 17 years later [since the 2003 SARS outbreak]. But, for us to try to solve everything in two to three months is just not feasible."

'This is a product of nature'

In early January 2020, Chinese scientists sequenced the entire genome for SARS-CoV-2 and published it online. Researchers at the Wuhan Institute of Virology in China compared its genome to a library of known viruses — and found a 96% match with coronavirus samples taken from horseshoe bats from Yunnan.

"But that 4% difference is actually a pretty wide distance in evolutionary time. It could even be decades," says Dr. Robert F. Garry, professor of microbiology and immunology at Tulane University School of Medicine.

That extra 4% suggests the SARS-CoV-2 may not have evolved from bats alone, but may include viral material from another animal. In that case, the virus would have continued to evolve through natural selection in that animal. Moreover, that other animal may have acted as an "intermediate host," ultimately transmitting the virus to humans.

With this coronavirus, scientists aren't fully clear on whether an intermediate host was involved nor the chain of cross-species transmission to humans. Studies have found a genetic similarity between this coronavirus and coronaviruses found in pangolins, also called scaly anteaters, which are vulnerable to illegal wildlife trade.

Given that some China's earliest COVID-19 patients were connected to the Hunan Seafood Wholesale Market in Wuhan, it is likely the seafood market played a role in amplifying the virus. However, there is not enough evidence to prove that is where the virus transmitted from animals to humans. There is also evidence emerging that among the first 41 patients hospitalized in China, 13 had no connection to this particular marketplace. The path of the pathogen is still unknown.

As for clues the virus holds about its animal origins, Robert Garry and fellow researchers have hypothesized that SARS-CoV-2 could be a blend of viruses from bats and another animal.

"The receptor binding domain actually shares a lot of sequence similarity to a virus that's found in the pangolin" Garry said, referring to the receptor-binding mechanism that allows the virus to form a strong attachment to human cells. "So, those sequences probably did arise from a virus like the pangolin coronavirus, or maybe some other coronavirus that can circulate in pangolins or some other animals." Further genetic analysis is needed to figure this out.

In studying the genome, Garry also confirms the virus came from wildlife. "This is a product of nature. It's not a virus that has arisen in a laboratory by any scientist, purposely manipulating something that has then been released to the public," he said.

'It's A Billion Dollar Question'

So, why are bats such good hosts for viruses?

Bats are critically important for pollinating flowers and dispersing seeds. They catch bugs, the same ones that bite us and eat some of our crops. But bats also harbor some of the toughest known zoonotic diseases.

The Rabies virus, the Marburg virus, the Hendra and Nipah viruses all find a natural reservoir in bats, meaning those viruses live in bats without harming them. The Ebola outbreak in West Africa was traced to a bat colony. The SARS virus originates in bats, along with other coronaviruses. And now, SARS-CoV-2 is linked to bats too.

Wang believes bats' high tolerance for viruses may have to do with the fact that they are the only mammal that's adapted for flight.

"During flight, their body temperature goes all the way to 42 degrees (or 108 degrees Fahrenheit). And their heartbeat goes up to 1000 beats per minute," Wang said.

Flying several hours a day, bats burn a great deal of energy. This creates toxic free radicals that damage their cells, but Wang's research has shown that bats have also evolved abilities to repair and minimize that cellular damage. Those same defensive abilities may help them not only tolerate flight, but also to fight infectious diseases in a way that human bodies cannot.

"Our hypothesis is that bats have evolved a different mechanism to get the balance right for defensive tolerance. And that favors the virus to live peacefully with bats," said Wang.

Peter Daszak, President of the U.S.-based non-profit Ecohealth Alliance, says that even if bats are the origin, they are not to blame for the pandemic.

"It's not bats. It's us. It's what we do to bats that drives this pandemic risk," Daszak said. His research demonstrates how interactions between wildlife and livestock, food and agriculture practices, as well as humans close proximity to animals in densely populated areas, create the conditions for viral outbreaks.

"One of the positive things about finding out that we're actually behind these pandemics is that it gives us the power to do something about it. We don't need to get rid of bats. We don't need to do anything with bats. We've just got to leave them alone. Let them get on, doing the good they do, flitting around at night and we will not catch their viruses," Daszak said.

Given that infectious and zoonotic diseases have been on the rise for decades, Wang is frustrated by the fact that countries around the world failed to understand the impact this novel coronavirus outbreak would have.

"I'm so angry right now. This COVID-19 outbreak, before January 20th, you could say it's China's fault. The Chinese government. But after January 20th, the rest of the world is still not taking it seriously. Our political system, our diplomatic system, our international relationship system is just not ready," Wang said.

January 20th is when Chinese health officials confirmed the new coronavirus could be transmitted between humans — and the World Health Organization kicked into high gear to evaluate the global risk. There were more than 200 cases then. Now, the confirmed case count is nearing 2 million worldwide.

This episode was produced by Brit Hanson, edited by Viet Le, and fact-checked by Emily Vaughn.