Accessibility links
Smithfield Foods: How A Mayor Forced Pork Giant To Close Virus-Stricken Plant Smithfield Foods didn't want to stop slaughtering hogs at its Sioux Falls pork plant, even after hundreds of workers got sick with the coronavirus. Then the city's mayor forced the company's hand. 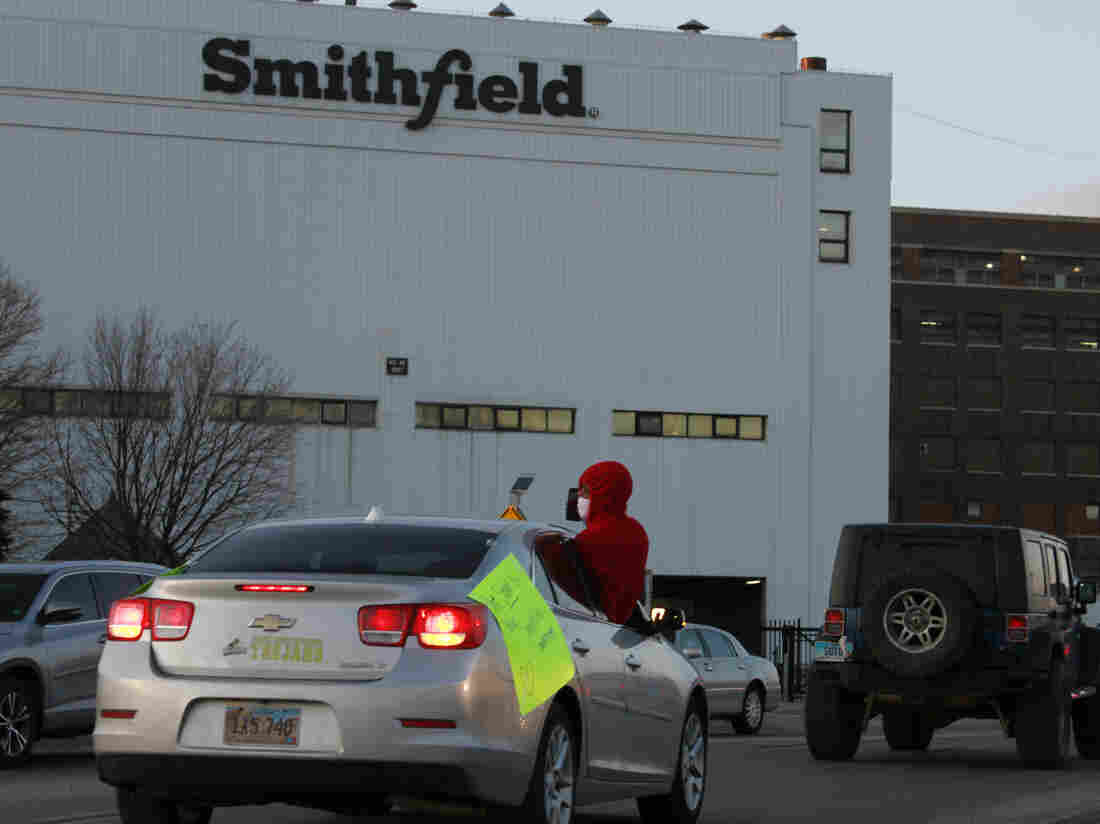 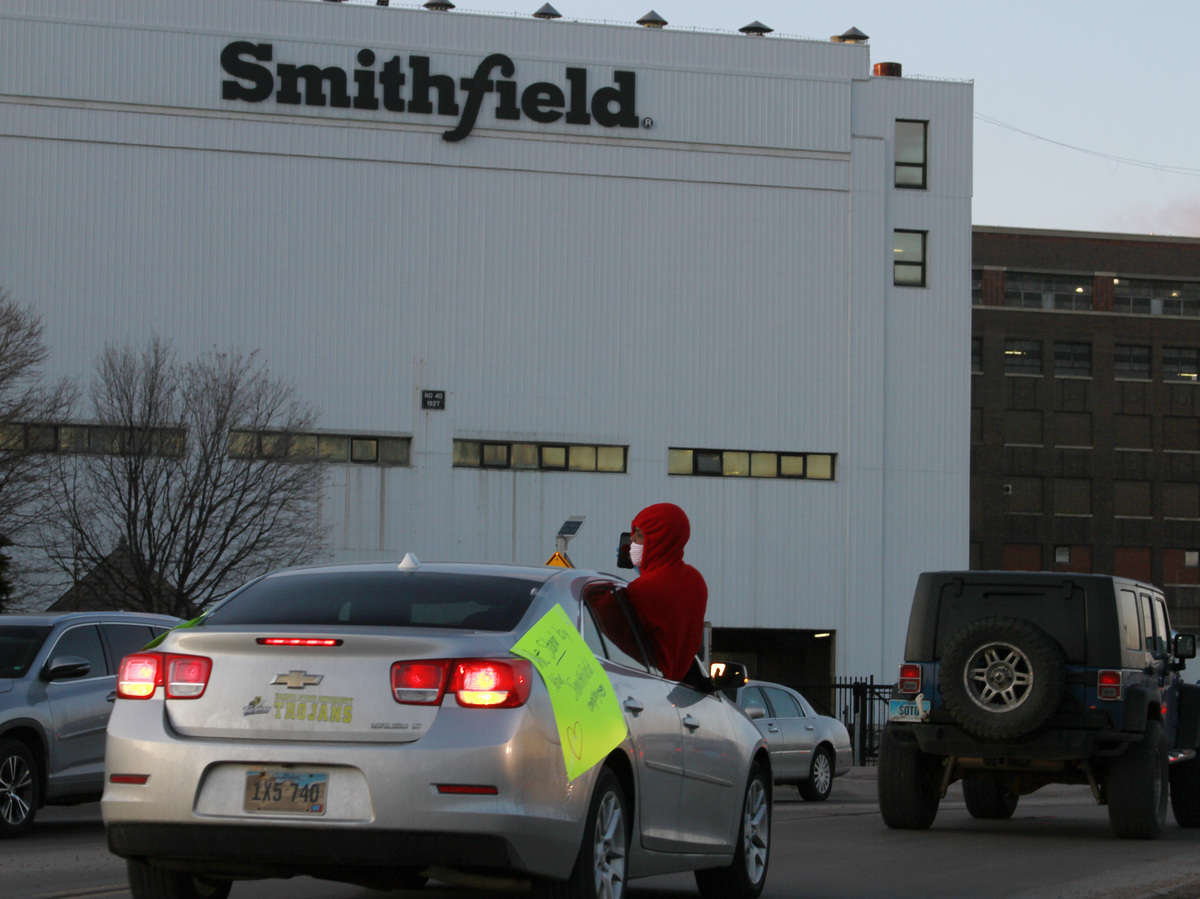 Employees and family members protest outside a Smithfield Foods processing plant in Sioux Falls, South Dakota last week. The plant has had an outbreak of coronavirus cases.

Paul TenHaken, the 42-year-old mayor of Sioux Falls, South Dakota, said it wasn't easy getting the world's top pork producer to shut down one of its biggest plants.

"It was tense," TenHaken said. "You know, you shut down a plant like that, it has a pretty big impact on the food supply. So we weren't taking this lightly, making this request."

TenHaken, a former marketing entrepreneur, realized in early April that his city was turning into a hot spot of the novel coronavirus pandemic. And the infection was spreading most rapidly among the 3,700 workers at a pork processing plant owned by Smithfield Foods on the banks of the Big Sioux River, just north of the city center. Most of the workers at the plant are immigrants; they speak 26 different languages.

"This thing jumped out of a light socket," TenHaken said.

Dozens of workers were testing positive for the virus each day. TenHaken worried that Smithfield wasn't doing enough to stop the virus from spreading.

He called the company's executives, he said, and told them, "We need to see a temporary closure, not only to calm the community, but to ensure that the safety of your employees is priority No. 1."

On Thursday, Smithfield agreed to close the plant in order to clean it, but just for three days. Meanwhile, the number of sick employees kept climbing, and TenHaken wasn't satisfied with the information he was getting from the company. The breaking point came Saturday morning, when the mayor heard that the number of infected employees had climbed past 100.

What We Know About The Silent Spreaders Of COVID-19

"It's an untenable amount," TenHaken said. "We really were left with no option."

He drafted a letter to Smithfield's CEO, calling on the company to shut the plant for at least two weeks. Before he sent it, TenHaken, a Republican, sent a copy to South Dakota's governor, Kristi Noem.

"I said, 'Hey, I'm going to ask Smithfield to do this," TenHaken said. "You can sign onto it if you'd like. But either way, it's going to him."

Noem, who has been criticized for failing to issue a stay-at-home order in South Dakota, signed on. Later that day, the two officials released their letter to the press. That public disclosure forced Smithfield's hand.

The list of temporarily shuttered facilities includes a Tyson pork plant in Columbus Junction, Iowa, and one of the largest beef packers in the country, operated by JBS, in Greeley, Colorado.

On Monday, the count of positive coronavirus tests among employees at the Sioux Falls plant reached 350. It represented almost 10% of all workers at the plant, and 40% of all COVID-19 cases in South Dakota.

Yet Smithfield's CEO, Kenneth Sullivan, issued a statement that sounded like a protest.

"We have a stark choice as a nation: we are either going to produce food or not, even in the face of COVID-19," he wrote, warning that closing such plants "is pushing our country perilously close to the edge in terms of our meat supply."

"I would say that there's still a lot of meat on the market," said Christine McCracken, senior director for animal protein at RaboResearch. "Quite a bit of meat, actually; pork, chicken and beef."

In fact, the pork industry is currently dealing with a glut of its product due to a collapse of demand from chain restaurants and food service companies that supply corporate cafeterias and schools.

"The poster child for that is pork bellies and bacon," said Steve Meyer, a pork industry expert with Kerns & Associates.

A large portion of all the bacon in the country, perhaps as much as 60%, normally goes to these places for breakfasts of bacon and eggs and bacon cheeseburgers at lunch. Many of those places are now closed, and people aren't eating enough bacon at home to make up the difference.

Meyer said that in recent weeks, some pork companies actually sent some pork bellies, the source of bacon, to rendering plants where it was simply converted into protein meal and grease.

"That's unheard of," he said. "I mean, that happened back in the 90s when everyone was afraid of animal fat for cholesterol. But I never thought I would see that again in my professional life."

Meanwhile, demand at grocery stores is up, but shifting products to a new destination isn't easy.

"We can't just start shipping it all to grocery stores, because the packages are wrong," Meyers said. "You don't buy very many 20 pound boxes of bacon at the grocery store."

At the other end of the supply chain, meanwhile, Mike Patterson is part of a group of 12 farmers that normally ships 3,000 hogs each week to the now-closed Smithfield plant in Sioux Falls. Now, those animals are stuck on his farm with nowhere to go, yet younger pigs, still growing, soon will need that space in barns.

Patterson and his business partners are trying to figure out how long they can hold onto the pigs before over-crowding becomes a serious problem.

"We've probably got space for a couple of weeks," he said.

Some farmers are starting to talk about the almost-unthinkable: the possibility that they'd have to euthanize piglets because there's no room for them on the farm and little prospect of selling them.

"That would be an absolute last, last choice for anyone," said Angie Krieger, vice president of domestic marketing for the National Pork Board.