Accessibility links
For Students With Disabilities, Teachers Must Think Creatively One of the biggest challenges in moving school online has been how to offer services for students with disabilities. But educators are finding creative ways to connect. 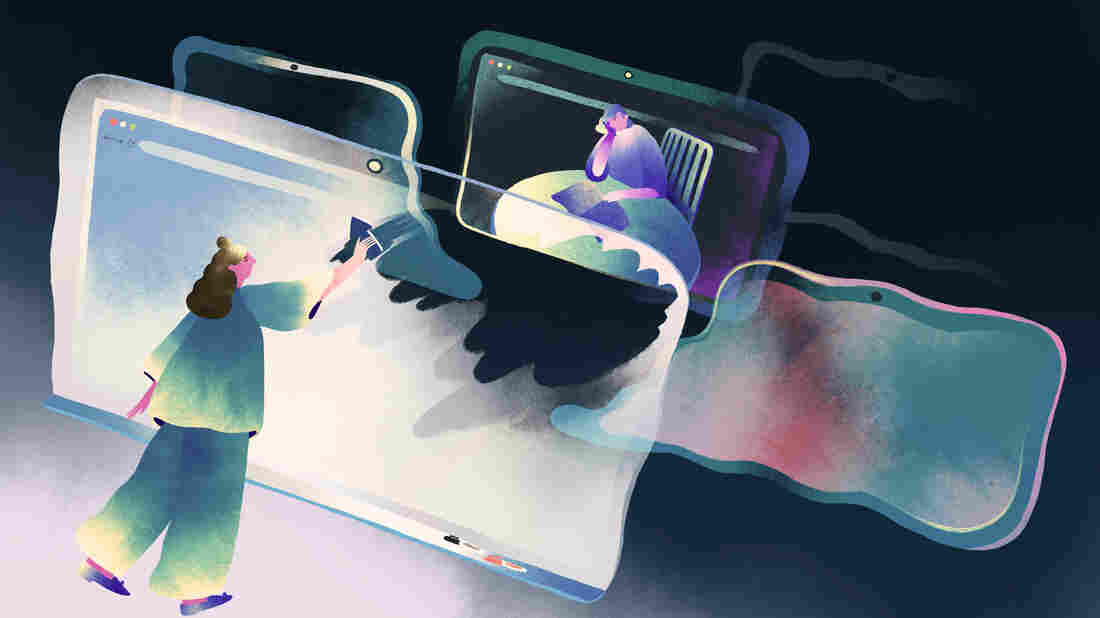 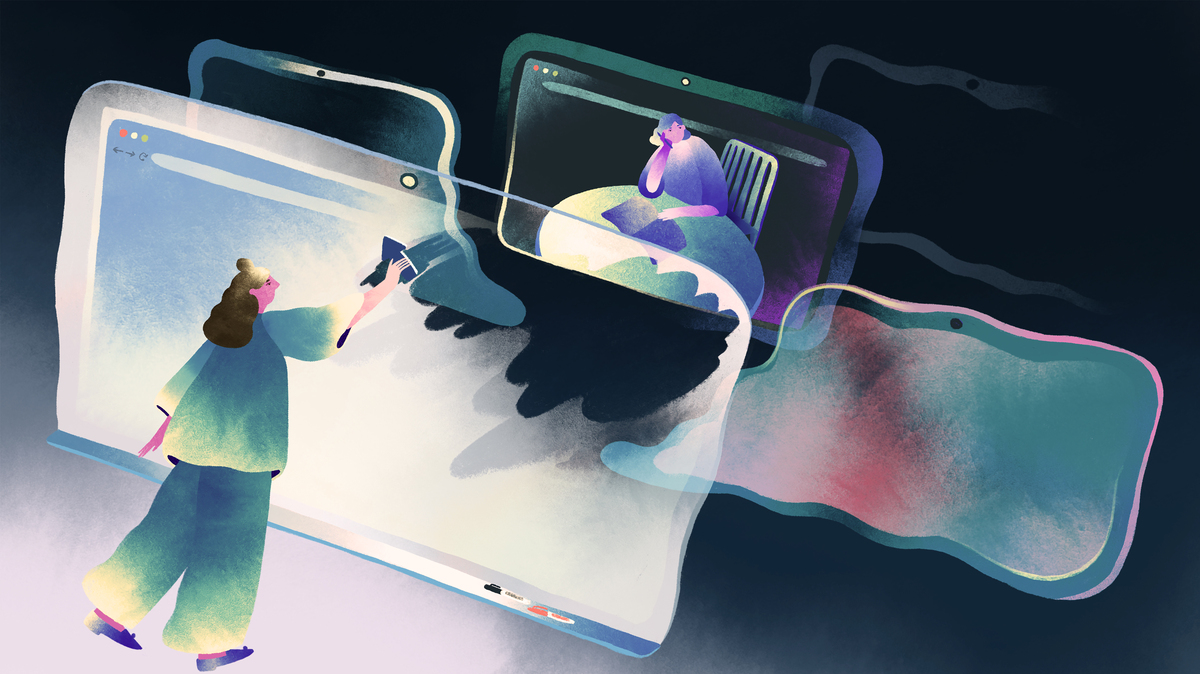 Despite cranky computers, conflicting schedules, shaky Internet connections and stubborn software glitches, Danielle Kovach got her whole class together a few Fridays ago for a video chat.

Kovach teaches special education in Hopatcong, N.J., and this Friday class session was a celebration: They'd made it through the first few weeks of distance learning.

Throughout those weeks, she'd maintained her 8:30 a.m. morning meeting over the computer, she was adhering to each student's IEP, or Individualized Education Plan, and juggling new lessons with old routines, as she adapted to the coronavirus crisis. She was exhausted.

And so the celebration was a big moment (and a big hit with her students). She instructed everyone to bring your pet to class. "They were all holding up their dogs, their cats," says Kovach. "We had fish, stuffed animals. They were so excited, it was just a fun time together."

She needed that victory.

"In my over 20 years of teaching, this by far has been my most challenging moment," says Kovach. The Internet has been a blessing and a curse — it took time to get all her families connected, but even now, the connection speed is flaky, and she really misses the personal contact she enjoys with her second- and third-graders.

On top of that, she's got three kids of her own at home. "I think that all of our teachers have risen to the challenge to make this work," Kovach says. "But there's also a lot of sleepless nights, a lot of worry."

As schools and learning have moved online, one of the biggest challenges has been providing special education. An estimated 14% of public school students receive such services in the U.S., and federal law requires schools to provide them. The U.S. Education Department has offered schools some flexibility, but with no road map or template for how to teach special needs students in this new world, teachers have been forced to innovate, adapting as they go along.

With Schools Closed, Kids With Disabilities Are More Vulnerable Than Ever

"We're seeing kids have services because people are being creative," says Kelly Grillo, a special education coordinator at Cooperative School Services who oversees special education at two rural school districts in Indiana. She's inspired by the ways teachers have embraced familiar tools, like Youtube, or apps like Remind.

One occupational therapist, Grillo says, sent packets home detailing ways to grip a pencil. Included in the delivery: extra pencils, so students could follow along with the videos the therapist posts online.

To help a second-grader who is immobile and non-verbal, Grillo and her team have been brainstorming ways he can use his family's smart speaker while he's at home. She says her team has not delayed or omitted services from any of their students' IEPs. In some cases, to help juggle the schedules of students and parents, teachers are even connecting with them in the evenings.

"It's really actually quite exciting," Grillo says. "This is actually changing a field to create access for kids with disabilities far beyond what anybody could imagine."

And it's not all high technology. For students who don't have access to the Internet, Grillo and her team — like many teachers across the country — are resorting to phone calls and text messages as well.

"Before this," she explains, "we didn't have an urgency to have tools in front of kids that they know how to use independently to access learning."

Andrea Leonardi feels that urgency, too. She's the assistant superintendent for student services in Wilton, Conn., and when schools closed, her first thought was: "How are we going to meet the needs of students with disabilities? What's that going to look like?"

In just a few days, she convinced her district to purchase software from PresenceLearning, a company that works with hundreds of school districts offering live speech therapy, occupational therapy, and behavior and mental health services. At first, Leonardi was thinking the district would use the company's therapists for services, but the idea shifted instead to train Wilton educators and therapists to use the platform.

'There's A Huge Disparity': What Teaching Looks Like During Coronavirus

That way, their students would see familiar faces. "Before this, I was pretty skeptical," Leonardi says. "I'm a face-to-face educator, and so the idea of teletherapy ... I wasn't sure." But when she knew her own team would be on the other end of the video calls to students, "that was just too good to pass up."

About 40 district staff — including speech and language pathologists, occupational therapists, behavioral mental health staff, school psychologists, school social workers and special-ed teachers — got trained on the platform. It's essentially like a digital office, with a video chat component, built-in ways to "gamify" activities (like dice and spinners and lots of emojis).

But there are also familiar tools to use in a therapy session or lesson.

"We are very lucky to live in the digital age that we live in right now because I don't think we would be able to do any of what I'm doing right now without it," says Katie Miller, a speech and language pathologist at Cider Mill School in Wilton. Miller has been using the platform and says her virtual office "functions pretty similarly to how I would do it in my classroom."

Miller, who's been with the district for five years, is working with her students on language skills and articulation. Using PresenceLearning, she's created a dice game: when students roll a number, there's a corresponding board with numbers that dictates the sound or word they're practicing. When the student gets the sound right, they can click the digital die again, to try another word or sound.

"Articulation can be a little bit dry at this level, because it's motor memory," Miller explains. If it has to be done over a screen, at least the game livens it up. "Anything to make it a little more interactive."

Leonardi says that's typical of how teachers are finding new ways to make the tools fit their students' needs. "This situation has forced us to drop everything we've known and try to think about how we do our work differently."

Joy Lawrence, a speech and language pathologist at the high school in Wilton, says she is grateful for the new digital tools, but she knows they can't replace actual face-to-face contact.

Some of her students have autism or attention deficit disorders, she says, and so eye contact and physical proximity are essential to her work. Lawrence offered one quick example: When she's sitting right next to a student, she can use her voice as a teaching tool. "The softer your voice is," she says, "the more they pay attention, the more they listen," she says. On the computer, "you're like yelling into this speaker and your voice is echoing through the house. It's really difficult."

Online, it's much harder to gauge that level of attention. "It's really challenging when you're sitting on a computer screen and you don't know what they're looking at."

The Beat Goes On: High School Choirs Improvise In The Age Of Coronavirus

Lawrence says, given those challenges, she's working with her students to reinforce what they learned before, and trying to maintain that personal relationship with them.

Many educators say that's essential right now: Staying in contact with students and letting families know that the special education supports are still there.

Though sometimes, even when you're doing the best you can, it doesn't feel like enough, says Danielle Kovach, the special education teacher in New Jersey.

On Easter Sunday, she says, her phone rang. She was tied up with her family, and let it go to voicemail. It was one of her students. In the message, he told her she was the best teacher ever and that he missed her and wished this coronavirus would go away because he wants to be back in school.

It was a nice moment. "It felt like he knew that I was still here, that his teacher wasn't going anywhere." And in that way, she says, "we're still teaching a lesson."