Accessibility links
As Deaths Mount, Volunteer EMTs At New Jersey's Coronavirus Epicenter Labor On The EMT crew on the front lines of one of the hardest-hit New Jersey towns is all volunteer. They say calls are getting more intense and more people are dying. 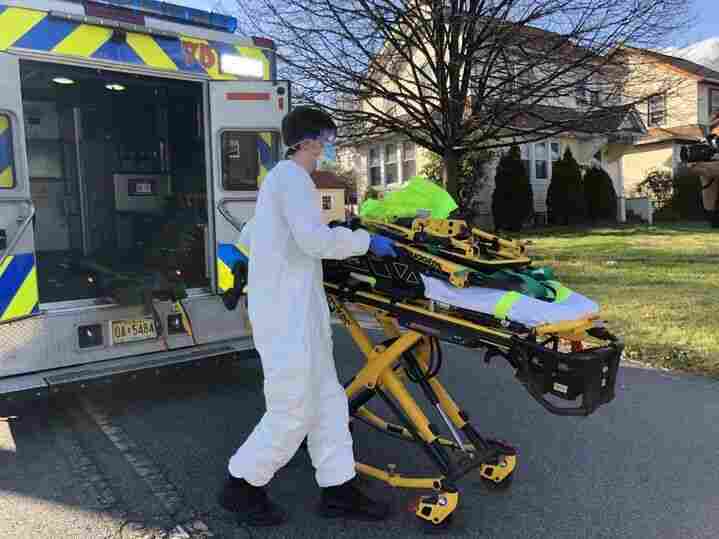 Teaneck Volunteer Ambulance Corps member Bobby Alexiou, 20, wheels out a stretcher outside the home of a potential COVID-19-positive patient in Teaneck, N.J., after suiting up in a protective suit, donated goggles from the local high school and an N95 mask. Karen Yi/WNYC hide caption 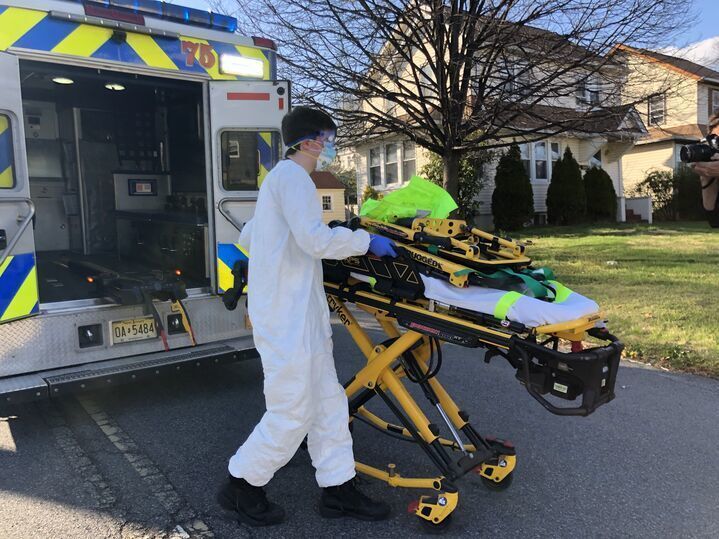 Teaneck Volunteer Ambulance Corps member Bobby Alexiou, 20, wheels out a stretcher outside the home of a potential COVID-19-positive patient in Teaneck, N.J., after suiting up in a protective suit, donated goggles from the local high school and an N95 mask.

In one of the houses on a suburban street in Teaneck, N.J., a woman is struggling for air.

Joe Horowitz, 21, and Bobby Alexiou, 20, hoist her onto a stretcher. The tubes from an oxygen mask dangle across her body.

"Ma'am, slow, deep breaths, OK?" Horowitz says reassuringly as he buckles her in. "Try to slow down your breathing."

Her chest heaves violently. She fights for every breath, and her fingers cling tightly to the sides of the stretcher. Her family watches from the front yard; they have to stay behind.

The members of the Teaneck Volunteer Ambulance Corps rush her to the local hospital, driving past refrigerated trucks brought in for the overflow of bodies.

But the woman won't make it — yet another victim of the virus that has killed nearly 2,500 people in the state.

"This was a particularly difficult call," says Horowitz, who started volunteering as an EMT when he was 15 years old. "It's the frequency with which it happens which makes it more difficult."

Teaneck is the hardest hit town in the hardest hit county in the state and was an early epicenter for the outbreak. The rate of infection for the North Jersey suburb of 40,000 people is slightly higher than in New York City. Working the front lines is the all-volunteer, unpaid Teaneck EMT squad that for weeks has responded to an alarming number of calls.

"This is really when we're needed the most," says Capt. Jacob Finkelstein, 24. "Our volunteers, they're giving 200, 300%, whatever it takes to make sure that we are here."

Finkelstein moved out of his family's house into an apartment to avoid spreading the illness to his father, who has preexisting medical conditions. Horowitz is living alone after his family decamped to upstate New York. Nearly half the volunteers are out sick, on quarantine or worried they will bring the virus home to their families.

Volunteer EMTs respond to more than a quarter of the calls in New Jersey, but some squads have stopped responding during the pandemic. In some cases, their members are part of the at-risk population or they've run out of supplies.

Finklestein says his crew is in desperate need of personal protective gear and often has to get creative to stay safe. A high school donated goggles from its closed science labs. A local family drops off homemade face shields made with thick plastic and ribbons every few nights. And when they ran out of gowns, somebody dropped off mechanic coveralls.

The crew is burning through boxes of supplies as calls keep growing in number and severity. During a recent shift there's a patient in respiratory distress, another in cardiac arrest and yet another who can't breathe. At least three die before the EMTs even make it inside.

"Some of our crews are going on two, three, four, five [of these calls] a day," says Perry Maeir, 34, another volunteer.

"What I am concerned about is, as a group, the amount of death that we've been seeing over the past two weeks — that eventually is going to take its toll on somebody," he says. "What's it going to be like in a month from now? Four months from now?"