Accessibility links
'The Virgin Suicides' Is The Perfect Quarantine Soundtrack The film's dreamlike score, by the French duo Air, sounds the way high school feels: frustrated, isolated, fearful and hopeful all at once. Under social distancing, it's not hard to relate.

That Teenage Feeling: Why 'The Virgin Suicides' Is My Quarantine Soundtrack

That Teenage Feeling: Why 'The Virgin Suicides' Is My Quarantine Soundtrack 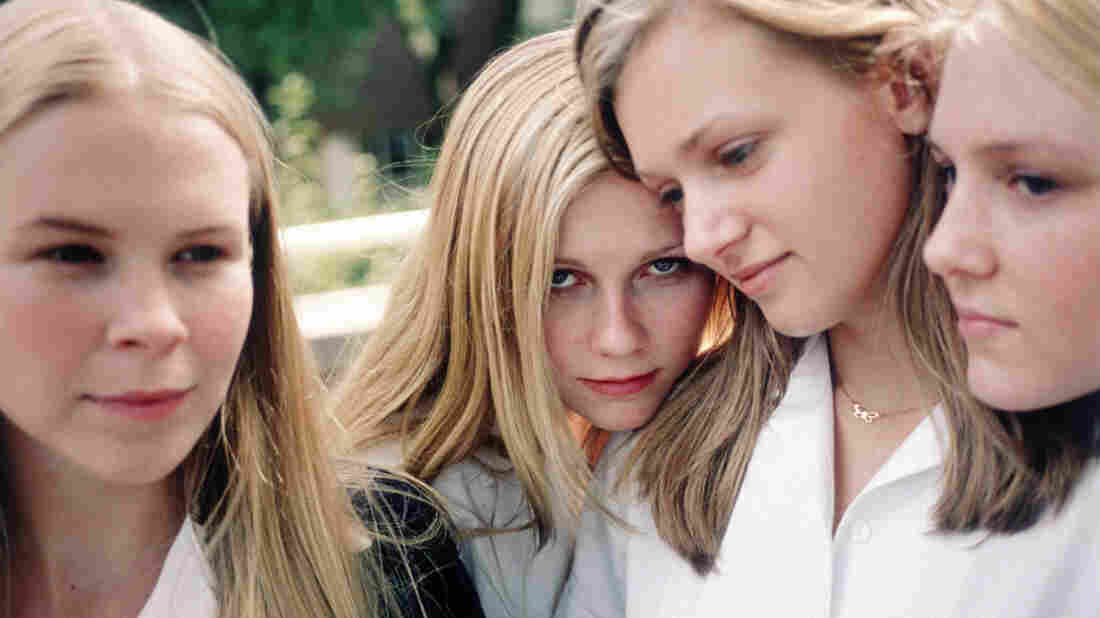 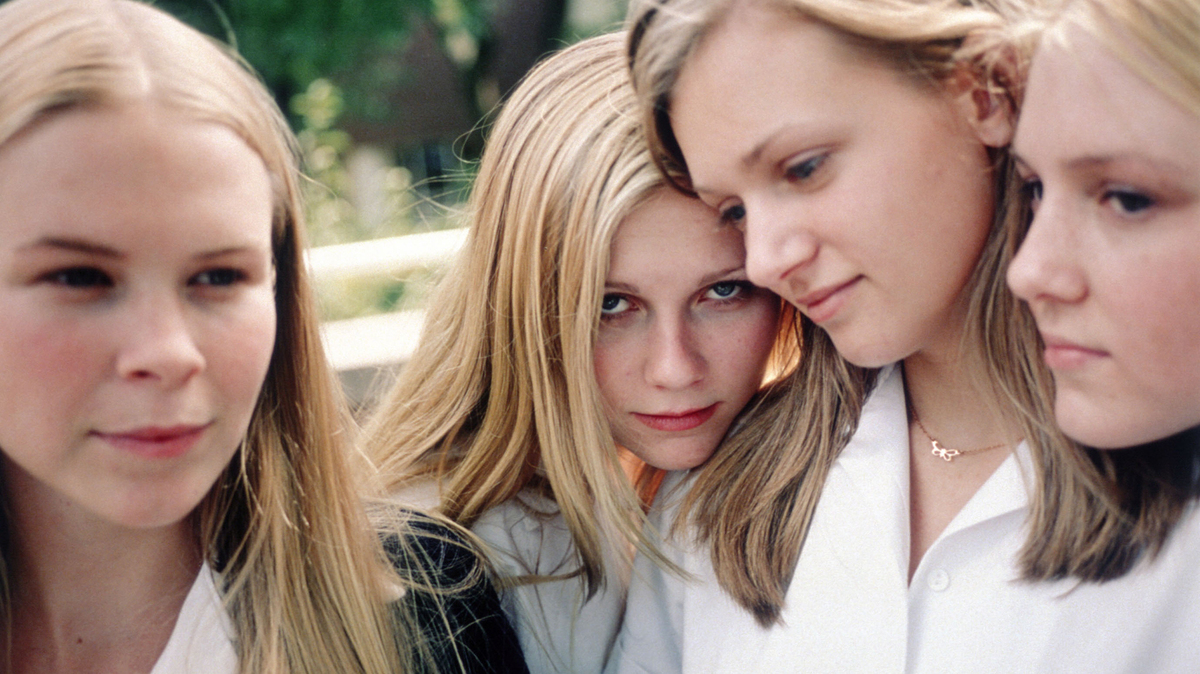 Courtesy of The Criterion Collection

Late in Sofia Coppola's mesmeric 1999 film The Virgin Suicides, a group of teenage boys swallow their nerves and call up the Lisbon sisters — classmates they're enamored with, who have been put under house arrest by their strict parents. When the girls pick up the phone, the young men hold the receiver up to a record player speaker, dropping the needle on Todd Rundgren's "Hello It's Me." They let the wrenching song play through the chorus, then hang up. Seconds later the girls call them back, this time responding with a song of their own: Gilbert O'Sullivan's "Alone Again (Naturally)." The two groups go back and forth, communicating solely through the poignant music they play for each other —"Run to Me" by the Bee Gees, Carole King's "So Far Away" — and practically holding their breath in anticipation as they wait to hear from the other side.

It's one of the sweetest moments in a story that is largely somber, at times problematic. But it is also an example of how the film captures the particularities of being a teenager: frustrated and waiting for life to finally start; spooked about what the unforeseeable tomorrow might hold; full of unrequited pining and fumbled romance often bereft of true intimacy; devastatingly solitary, yet well aware that these gnarled years are an experience shared by everyone.

In many ways, those tough teenage feelings aren't too different from those I've found emerging in our current period of indefinite isolation. I've been lucky enough to be working at home these past couple of weeks, and have tried to keep my own anxieties and grief about the coronavirus pandemic at bay while finding new ways to be alone, together, with the people I care most about. During this unsettling time, I've unconsciously been turning toward the sounds I came to love during my own fraught teenage years, which I often found through used CD bins. One of those was the music of The Virgin Suicides — not its collection of era-appropriate pop songs, but the dreamlike score that fills the space between them, crafted by the French electronic duo Air.

Like the film itself, which entered The Criterion Collection in 2018, Air's score has grown beyond its early cult following, and become a reference point for film composers aiming to create more than just an atmosphere for characters to inhabit. Nicolas Godin and Jean-Benoît Dunckel had released their marvelous debut, Moon Safari, in 1998, and after its release were approached by Coppola about lending their talents to her own first feature. (Brian Reitzell, formerly of the idiosyncratic band Redd Kross, had toured with Air on Moon Safari and contributed drums to the score; he's worked as a music supervisor, often with Coppola, ever since.) Released in early 2000, The Virgin Suicides isn't precisely Air's sophomore album, but it's remarkable all the same, a huge step forward for a band that has since gone on to carve out their own strain of electronic imaginings, slick and sentient at once.

Adapted from Jeffrey Eugenides' novel, set in a Detroit suburb against the backdrop of the automobile industry's mid-1970s decline, the film tells the story of the teenage Lisbon sisters from the perspective of a group of boys who have grown up both infatuated with and unnerved by them. Cecilia, Lux, Bonnie, Mary and Therese are kept close by exacting religious parents, who forbid them from participating in much of anything their classmates do — until, one day, Cecilia tragically takes her own life at 13. The Lisbons cautiously loosen their grip, and eventually allow the other four daughters to attend a homecoming dance with the boys. But when Lux fails to return home from the party until the next morning, retribution is swift. Mrs. Lisbon takes the girls out of school, putting them on complete lockdown. The story ends with a final, shocking act: the sisters' collective suicide, arranged so that their young suitors find them moments after they've died. Years later, as grown men, the boys are still trying to make sense of what happened.

The band has said Coppola's early vision for the film was even bleaker, and so its first draft of the score followed suit. "The first rushes we saw were really dark and deep, so we began by making very moody stuff, music that was like stepping out between light into something quite dark," Dunckel told Stereogum of the film's original cut. "But more and more, Sofia cut the movie into a love story — a teenager-style movie."

The planned dirges, then, grew into songs of longing — like the standout opener "Playground Love," a baroque pop reverie featuring Phoenix frontman Thomas Mars (now Coppola's husband) under the alter-ego Gordon Tracks, who sings lines like "Yet my hands are shaking, I feel my body remains" in an evocative purr. Coupled with sweeping orchestral flourishes and a touch of saxophone, the song mirrors teenage crushes in all their turbulence and sweetness, as well as how one's first memories of feeling that way towards another human being take on a cinematic light.

That intensity is a throughline that courses throughout the album. A kick drum thuds through "Empty House" like blood pumping through a heart, making you actively aware of the one thumping in your own chest and keeping you alive, while a looped whistle amplifies the song's negative space, making it that much lonelier. On the whirring "The Word Hurricane," harmonious vocals interweave with a foreboding percussive rumble, like knowing a slow-motion storm is hurtling in your direction but having no idea how powerful it will be when it makes landfall. The track also incorporates sound bites from a charged scene in the film, where Lux Lisbon (Kirsten Dunst) and her romantic interest, Trip Fontaine (Josh Harnett), sit next to each other in school assembly as an educational film about hurricanes plays before them. Though their eyes are trained on the screen, their hands, moving at a petrifying pace, slowly make their way toward one another. Then the sound of a classmate's fart interrupts them, and the moment dissipates. 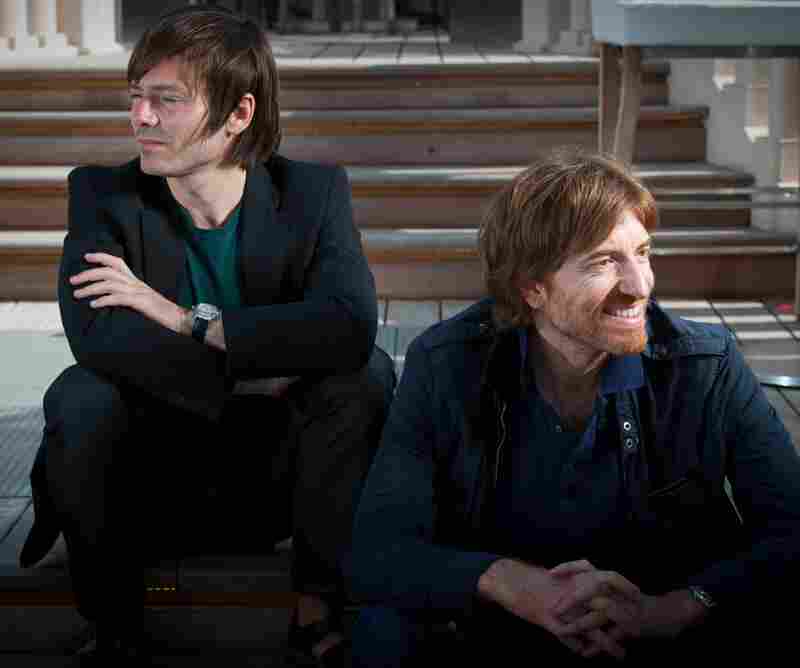 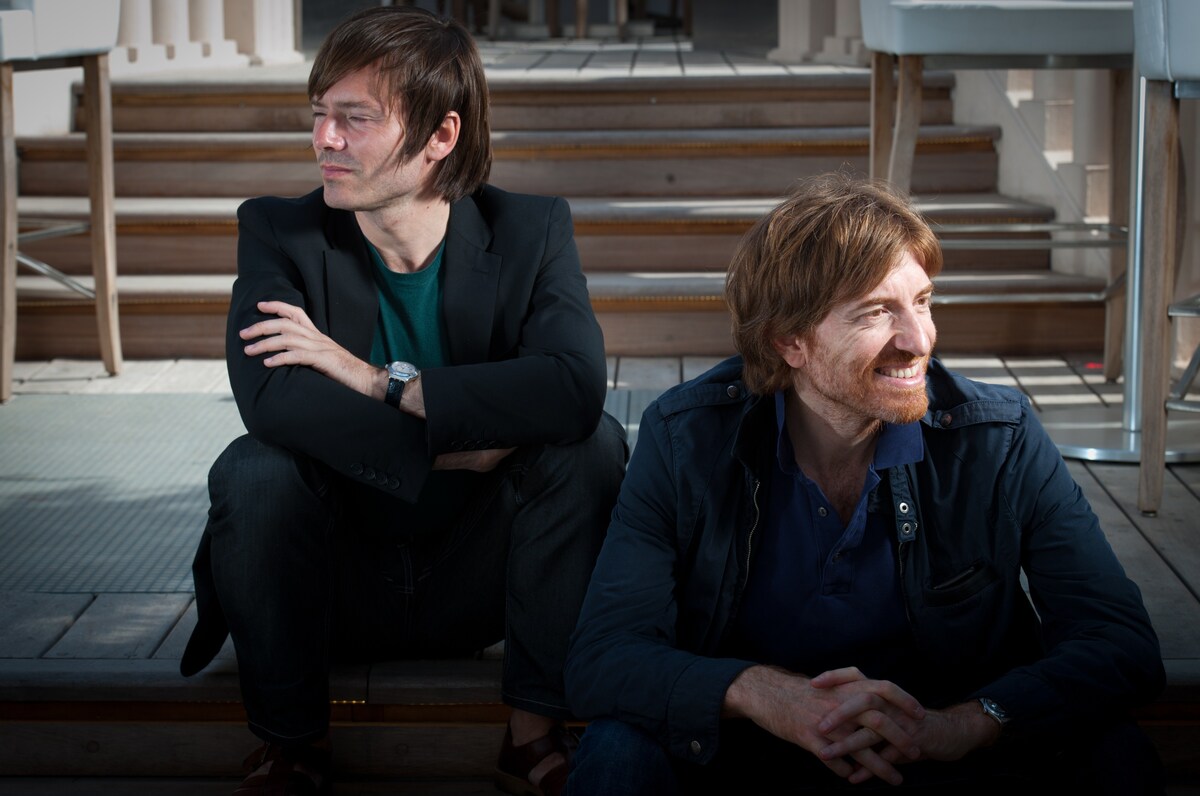 Jean-Benoît Dunckel (left) and Nicolas Godin of Air, photographed in 2011 at the Cannes Film Festival.

Teenage curiosity is amplified everywhere. Driven by an acoustic guitar and analog electronic warbles, "Clouds Up" is a wild ode to the sensation of being under the sky on a lackadaisical afternoon, feeling practically infinite. "Dirty Trip" sounds thrilling and illicit, all ominous bass lines and creeping organs — the sound of sneaking out and experimenting, less for its own sake than to study the new feelings it might provoke.

The song I keep hitting repeat on, though, happens to be the one that always makes me want to cry. With every guitar thrum and tinny piano note of the dizzying "Highschool Lover," a mournful reprise of the"Playground Love" theme, I'm flooded with memories from that disorienting time in my life: of slamming lockers and bashful gazes in the hallway, of quiz questions hastily scribbled on flashcards, of sitting on car hoods in a parking lot and willing a breeze to happen, of pinching my hips in the mirror and wishing to be smaller, of yearning to say something but the words getting caught in my throat, of the hollowness of being unseen.

Amidst the tension and unpredictability of those high school years, I wanted more than anything to know what the future might hold, and if we would all be OK in it. Every single adult I asked about what came next in life offered the same vague promise: that "things have a way of working out."

At this moment, 20 years later, the future is precarious for everyone. Letting ourselves feel everything we need to is the only way for many of us to move forward right now. For me, that has meant engulfing myself in music that contextualizes, comforts, and presses these feelings even further, hopefully towards understanding. Listening to the Virgin Suicides score on loop hasn't been so much an exercise in nostalgia, or even a means of escape. Reliving it is more of a prescient reminder — one I needed to hear as a teenager, and that I could use again today — that now is not forever.

Paula Mejía is the culture editor of Texas Monthly and a co-founding editor of NPR's Turning the Tables series.